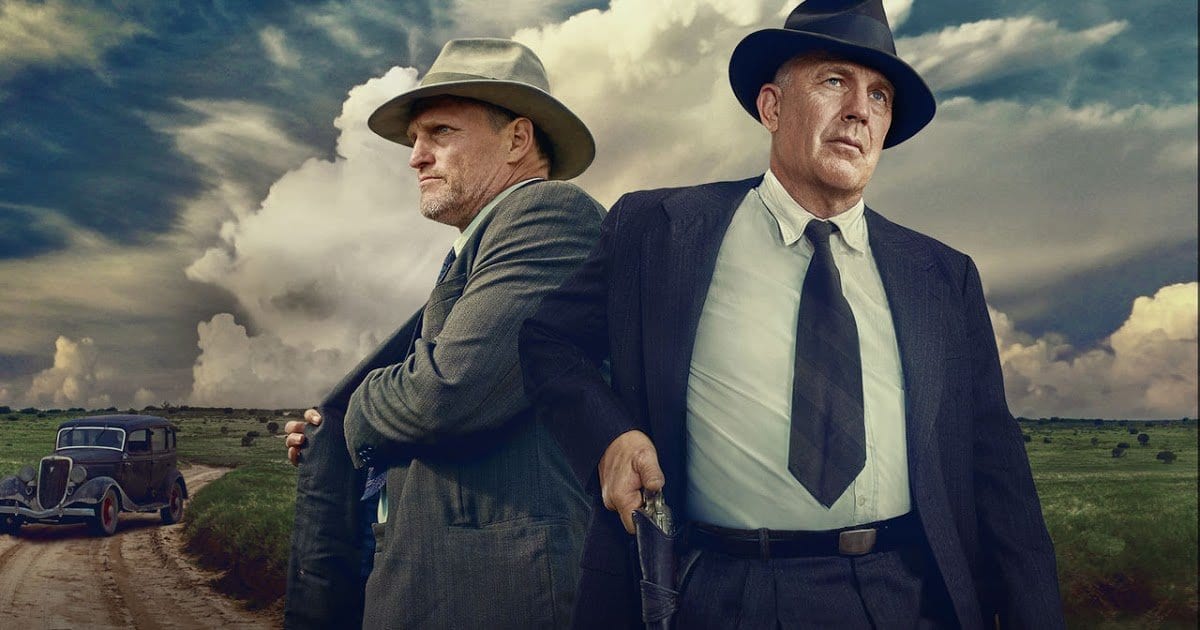 The outlaws made headlines. The lawmen made history. The Highwaymen follows the untold true story of the legendary detectives who brought down Bonnie and Clyde. When the full force of the FBI and the latest forensic technology aren’t enough to capture the nation’s most notorious criminals, two former Texas Rangers (Kevin Costner and Woody Harrelson) must rely on their gut instincts and old school skills to get the job done.

The thrilling, bloody and ultimately romanticized story of Bonnie and Clyde is one defined by a now iconic climactic moment on a May morning, 1934. 130 rounds of ammunition were let loose on the free-killing couple after they came to a stop on a dusty road in rural Louisiana to speak with an associate. Over the year’s countless renditions of the Bonnie and Clyde story have retold the story with this as its set piece. Most famous of all is Arthur Penn’s 1967 landmark picture. Most have concentrated their narratives on the intriguing killers pulling over in the dust. But director John Lee Hancock’s The Highwaymen re-tells this moment, a few meters to the left, behind the pine trees, from the resolute, all-American perspectives of the lawmen that tracked them down.

The Highwaymen follows Frank Hamer — the Texas Ranger who gunned down the deadly couple. In retirement after his unit was disbanded he is shepherded back into the field by a flailing Texas officials. Hamer is aging and haunted, but dedicated. So too is his wise cracking former partner Maney Gault, who trades the bottle for a chance to catch America’s Most Wanted. The pair operate somewhere in between the law and the bad guys, facing opposition not just from their targets but just about every traditional ally you could imagine including an obnoxious FBI team, the Texas authorities and each and every badge abiding face in and out of state-limits.

This fine set up turns out to unfortunately be something of a mixed bag. The Highwaymen is an attempt by Netflix to once again diversify its content for a range of audiences. Recently its focused hard on thrillers but this one is a little different. Specifically it’s a stab at the historical drama niche, and on historic properties alone — it is not bad. One cannot fault the cinematographer John Schwartzman, for his work on this film is undeniably impressive. The Highwaymen‘s attention to 1930’s period detail is stunning. Likewise crisp images of a sprawling, poverty-stricken, depression era rural America, ensure visual splendor is one of the film’s strongest qualities. Extreme long shots of the era’s skinny and elongated cars, sky-high in novelty value cars trekking up and down America’s dusty back roads, evoke the sort of imagery that make traditional Westerns visually appealing. But it’s here the nods to that genre should be left.

In aiming to exonerate Hamer, portrayed as something of a joke in Penn’s version, screenwriter John Fusco leans too heavy on the Western archetypal hero. Allusions are frequently made to their past adventures in Mexico, never fully explained to the audience. An implausible and highly expository scene sees Hamer reveal a dark childhood event to Clyde’s own father. The effect of it all is a confusing tone and uninteresting characters. The film seems fixated on righting the wrongs of the ’67 version. The Barrow Gang itself is given almost zero screen-time. When they are seen Bonnie’s limp is played up as much as possible in order to dispel any associations with Faye Dunaway’s sexualized heroine. This overbearing obsession with condemning the couple’s perverse fame, leaves it bordering on dull at times. One scene exists purely to showcase Hamer beat the living daylights out of a pro-Barrow gas station owner.

In moments the script threatens to explore a couple of interesting directions. However, never with any conviction. The Ranger’s marvel at new policing technologies, in addition to the men’s anxieties about shooting a “lady murderer” arouse brief interest. Instead we are treated to a basic cops and robbers story sorely lacking creativity. The cast does fine with what they are given. Hamer, while somewhat conventionally drawn, is played brilliantly by an aging, uber stoic Kevin Costner. Opposite him Harrelson bring his trademark wit to a dead-end sidekick role.  Unfortunately the talents of Bates and Kim Dickens are relegated to a handful of scenes between them.

While it won’t be remembered anywhere near the more famous incarnation, The Highwaymen’s desired audience of conservative minded folks disgusted by any cinematic sympathy with criminality will perhaps appreciate it. The film employs good visuals and fine performances. But this isn’t enough to make interesting.  The Highwaymen‘s shaky script wears itself out with frantically setting the historic record straight even at the cost of exciting cinema. 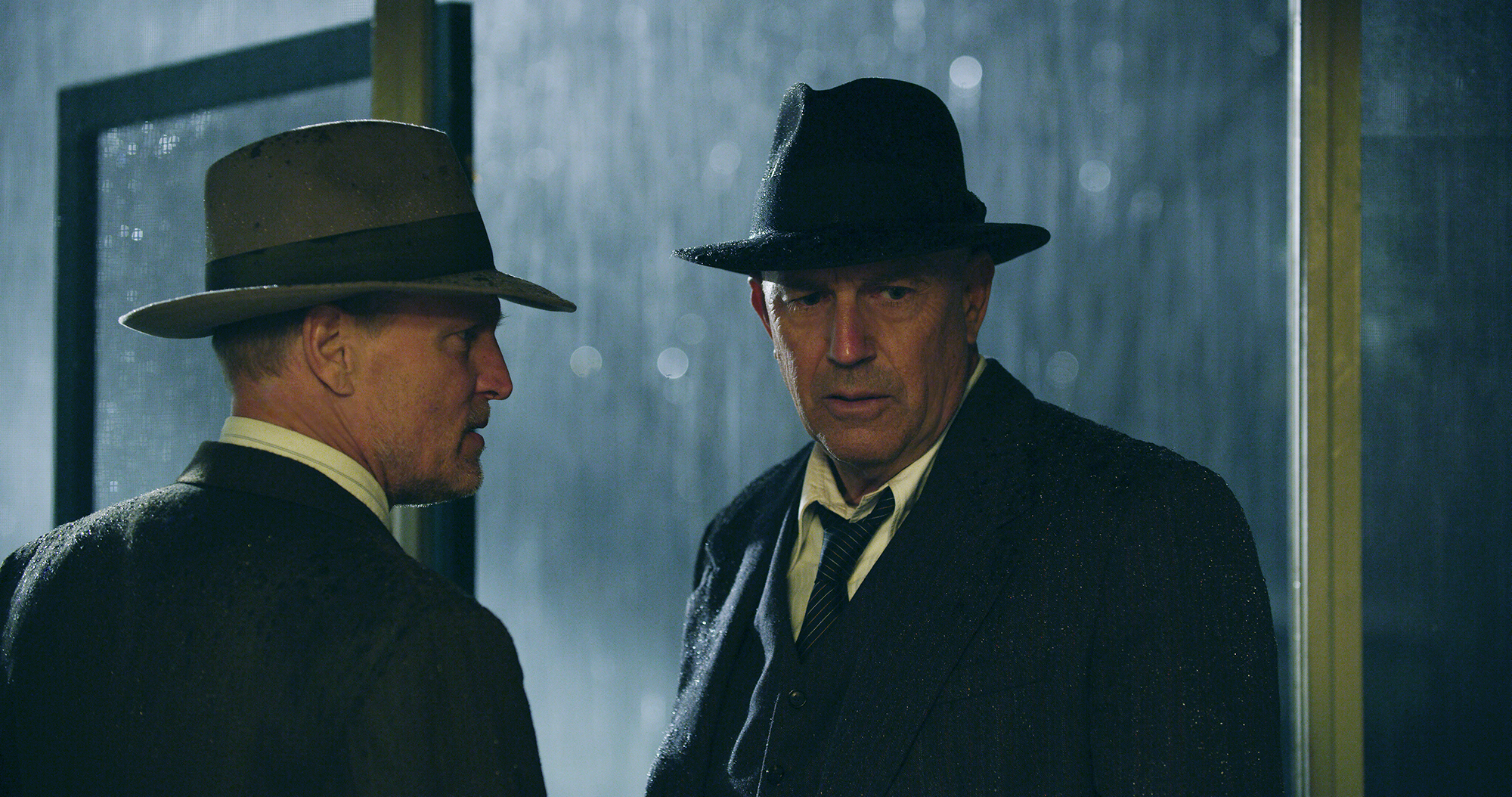 Thank you for reading! What are you thoughts on The Highwaymen? Comment down below!

[…] janitor fits closer to your typical Western hero. His sports car could easily have been a horse, riding into town while minding his own business, […]

[…] at Ashecliffe, Teddy and Chuck are led through the hospital grounds by Deputy Warden McPherson (John Caroll Lynch). The two learn that behind the electrified wire and within the dank, prison-like walls, are three […]

It had its moments. Trouble was they were all moments from other movies

I’m a Woody fan so I watched this the other night. Your review nails it. Woody aids relief and humanity but the movie often dragged, leaving me to sigh and wait for the inevitable ending. Bates and Dickens were so wasted but what else could be done with them, given the history and the script?