Shortly before he tragically passed away, Harry Dean Stanton had one final performance that many are calling the perfect ending to his career.  With great reviews and a bittersweet edge, Lucky is sure to tug on the heartstrings.  The following review will be spoiler free. 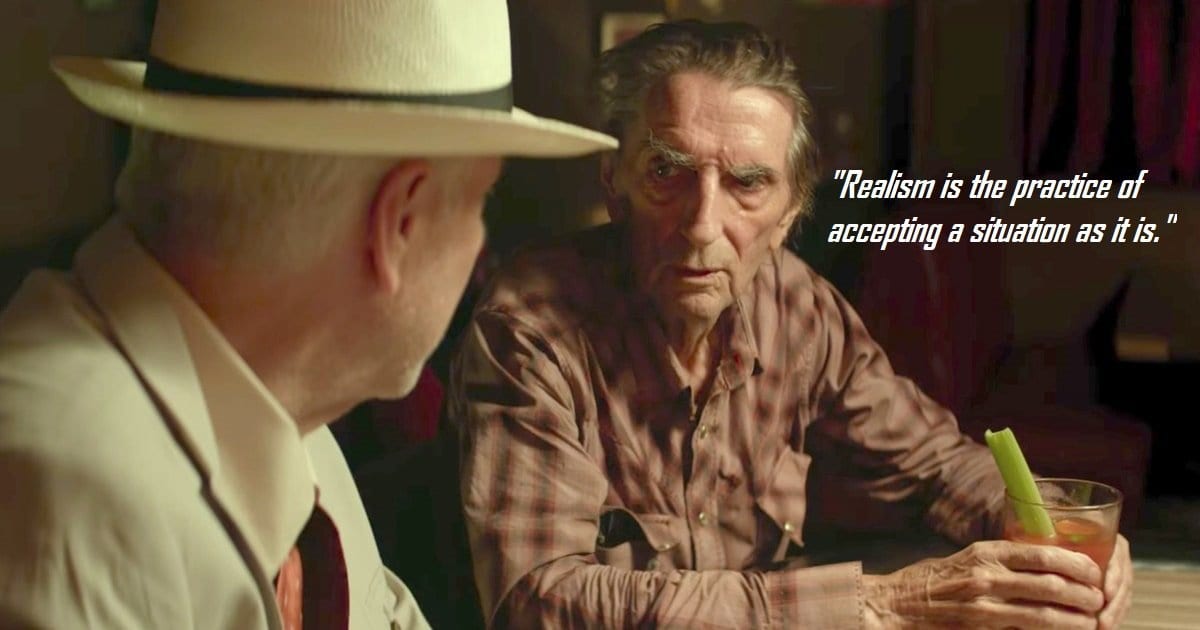 Living in a quiet desert town, Lucky is a strong-willed, elderly man who is coming to grips with dying at some point in the near future.  As a 90-year-old man, Lucky has outlived (and out smoked) all of those from a similar generation.  Forced by his circumstances to find some type of enlightenment in the world, Lucky goes on a journey of self-exploration with the help of some quirky townsfolk.

Although it’s sometimes extremely unfortunate, life and film sometimes have a way of lining up, making both pieces even more dramatic…and eerie.  Two weeks before Lucky began its limited release schedule back in September of 2017, the film’s star, Harry Dean Stanton, passed away at the age of 91 in a Los Angeles, California medical center.  Considering the main storyline of Lucky covers an elderly man’s quest to find meaning in life before he passes, the parallels to real life are unbelievably staggering in addition to being incredibly sad.

Stanton was a great talent in Hollywood for over six decades, appearing in classic films such as Cool Hand Luke, Alien, Repo Man, and The Green Mile with countless other credits to his name.  The man was one of the best character actors to ever work in the industry, easily switching between completely different roles.

With Lucky becoming Stanton’s final feature film, it’s as important as ever to recall the joy and drama that he brought to the screen for so many years.  Some individuals are fortunate enough to work for decades, but no one went about their work quite like Stanton. Harry Dean Stanton Ends His Career on a High Note

There’s certainly a proclivity to praise Harry Dean Stanton for his performance given that he passed away before Lucky was even released.  The notion that the film centers around coming to terms with death only furthers this tendency as well.  But, Stanton is truly great as the title character, regardless of the circumstances.

We see Stanton begin as a curmudgeon of sorts.  The film doesn’t dwell on the fact that he is disagreeable, it’s merely one of his definable character traits.  He’s a creature of habit, following the same routine almost to a T.  He loves his coffee with a lot of sugar and a lot of cream, getting to the point where waitresses at a local diner know exactly how to serve to it to him.  All of these quirks help to sell the fact that Lucky is a man who struggles to comprehend new, challenging ideas.  He has a manner of going about life and he intends to keep it that way.

Watching a man cut from this cloth attempt to understand his place in the world makes for a compelling watch.  You won’t see Harry Dean Stanton break down and cry, but you’ll see the emotion in his eyes every step of the way.

image via Live for Films

The tricky thing for general audiences is that Lucky can appear pretty bland at the surface.  Stanton rotates between his house, a diner, a bar, and the occasional trip to a convenience store for some milk.  He engages in typical conversation with locals, talking about crossword puzzles and his frustration with the classification of items in those puzzles.  To some, Lucky might appear as a film about nothing with a few loose threads that point towards a bland story of growing old.

However, Lucky leverages its habitual nature to its advantage.  You’ll notice subtle changes in Stanton’s character every single day that he encounters the same group of people.  Those interactions sometimes sour, but they all serve a purpose in the end.

These conversations are also oddly touching, including David Lynch’s fondness for his pet tortoise that manages to become a lovely side story that elevates the ultimate themes of the movie.

You’ve Seen this Story Before, But Not Quite Like This

Over the decades that film has been in existence, there’s always been scripts that include a struggle with mortality and our place in the universe.  We’ve seen countless stories of elderly individuals grappling with their purpose.  But where Lucky moves away from the pack is its sense of hope and optimism while also conceding the fact that the outcome of every person in pretty bleak.  Lucky both figuratively and literally smiles in the face of certain death.  The film even hints at the fact that this behavior isn’t logically sound.  Yet, it cleanses the mind of fear and regret.

We’ve seen the exact opposite interpretation of our place in the universe in terms of tone in other 2017 films like A Ghost Story, but you almost never attached the words “pleasant” and “lovely” to those stories.

Lucky is a celebration of life and the inherent mysteries that come with it.  As Harry Dean Stanton moves through this story, there’s an overwhelming sense of satisfaction.  Even so, at 86 minutes, you want to see more of Lucky and the rest of small desert town.  By the end of the film, you unabashedly love Lucky.

Aside from some minor technical issues, Lucky is a thoughtful, beautiful story that takes a positive spin on a sad subject, operating in the mundane to allow the title character to come to a lovely realization in the end.  Harry Dean Stanton offers one of the best performances of 2017, and proves as one of the best casting decisions of the entire year.

You certainly have seen this movie before, but they rarely ever reach the depth that Lucky does.  Seeing that aged smile of Stanton makes all the difference in the development of the movie’s themes, creating a film that is deeply unique.

Rest in peace, Harry Dean Stanton.  You certainly left with a bang.

Thanks for reading!  What are your thoughts on Lucky?  Comment down below!

Thanks for the review.. I think I’ll watch it soon! Good job!

Great introduction to the film, Nick – you write beautifully. Harry Dean Stanton, what an epic actor. Can you believe I haven’t seen Paris, Texas yet! What a kind face that man had, and we have the joy of being able to watch it in action for ever thanks to the film industry.

I can’t wait to see this one. Stanton, Lynch and Tom ‘Open the hatch’ Skerritt together. Wonderful.

You’re far too kind! You do raise an interesting point about his face, it’s truly different and works so well for this film. His expressions say it all!

This one goes on the must-see list for sure! I’m a Harry Dean Stanton fan from way back.

If you are I highly recommend seeing Lucky! It’s truly a celebration of his entire career and life!

This looks a really great movie; I’ll definitely look for it… Thank You for the review!

Very good review – this has intrigued me to see the film. Harry Dean Stanton will be much missed.

If you have Xfinity, the film is available now to rent if you simply can’t wait to see it!