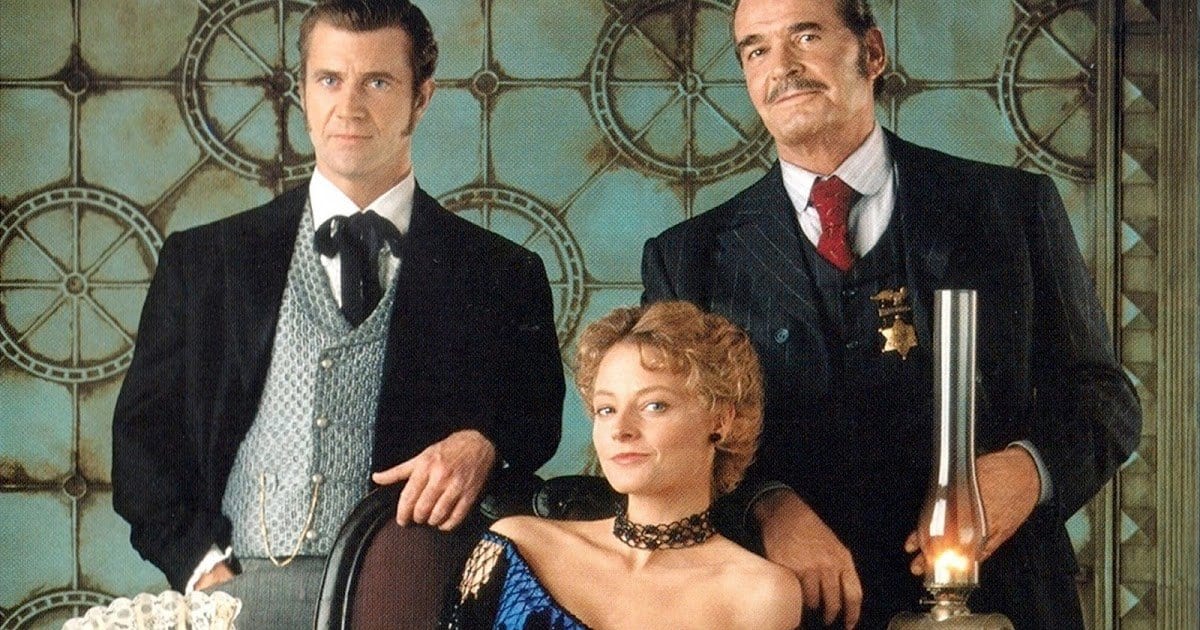 Maverick (1994) stars Mel Gibson as the titular character of Bret Maverick — an unscrupulous gambler in need of some money to enter a poker championship. James Garner (the star of the original Maverick TV series) is Marshal Zane Cooper and Jodie Foster is the thieving vixen, Annabelle Bransford. The three embark on an uproarious quest to get into the poker game.

After 25 years, Maverick is still a great tribute to the original TV series. Its humor is surprising and well-timed. The 90s country singer cameos in the ending poker game are enjoyable to see as well.

However, Maverick misses with a few of its major plot twists; yet, it also hits it out of the park on some of its twists and references. Because I will be discussing major plot twists, I would suggest not reading this if you don’t want spoilers.

I want to start out with what Maverick did phenomenally in the film — the reference to Lethal Weapon (1987). Near the beginning of the film, a masked outlaw robs the bank that Bret Maverick is in. When Maverick pulls down the bandanna covering the outlaw’s mouth, we see that the outlaw is played by Danny Glover, Gibson’s Lethal Weapon costar. The two share a humorous stare-off and then part ways for the rest of the movie.

It’s a short cameo and one I actually missed the first few times I watched it. Yet, it’s still a bright cameo for an equally fun movie. Lethal Weapon is such a beloved franchise that I can imagine audiences at the time probably thought this reference to be particularly droll.

Glover’s cameo was well-done in that there were no words spoken — just glances exchanged. Instead of having more oblique, heavy-handed dialogue to hearken back to the film, Maverick chooses to let audiences make their own connections. That way, there’s a fun little “a-ha” moment rather than eye-rolls at this amusing little reference. 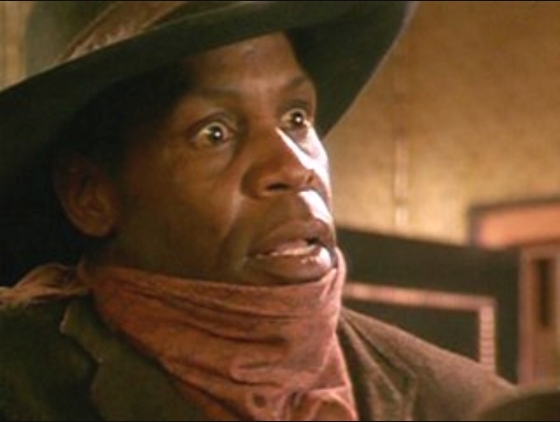 This is an example of one of Maverick‘s better plot twists. It actually surprises the audience to see that the damsel in distress is just as wily as Maverick. It develops the character of Annabelle Bransford more instead of making her just a cardboard love interest, something that really makes this movie work.

The only thing I don’t particularly enjoy about Annabelle Bransford is her Southern accent, something Maverick dryly mentions in the film. Jodie Foster has never been great at a Southern accent (see The Silence of the Lambs [1991]), but it really irks me in this film particularly. Yet, it does add an amusing layer to her character’s flaws and less-than-moral ways of dealing with people.

The Commodore is a Bad Guy

Honestly, this would have been a great plot twist if James Coburn had not been cast as Commodore Duvall. The problem with casting James Coburn as anything is that one condition must be met: he will be the villain. Sure, he has some roles as the triumphant hero, but he really has the looks of a villain. Who could at look his face and not immediately peg him as a bad guy? 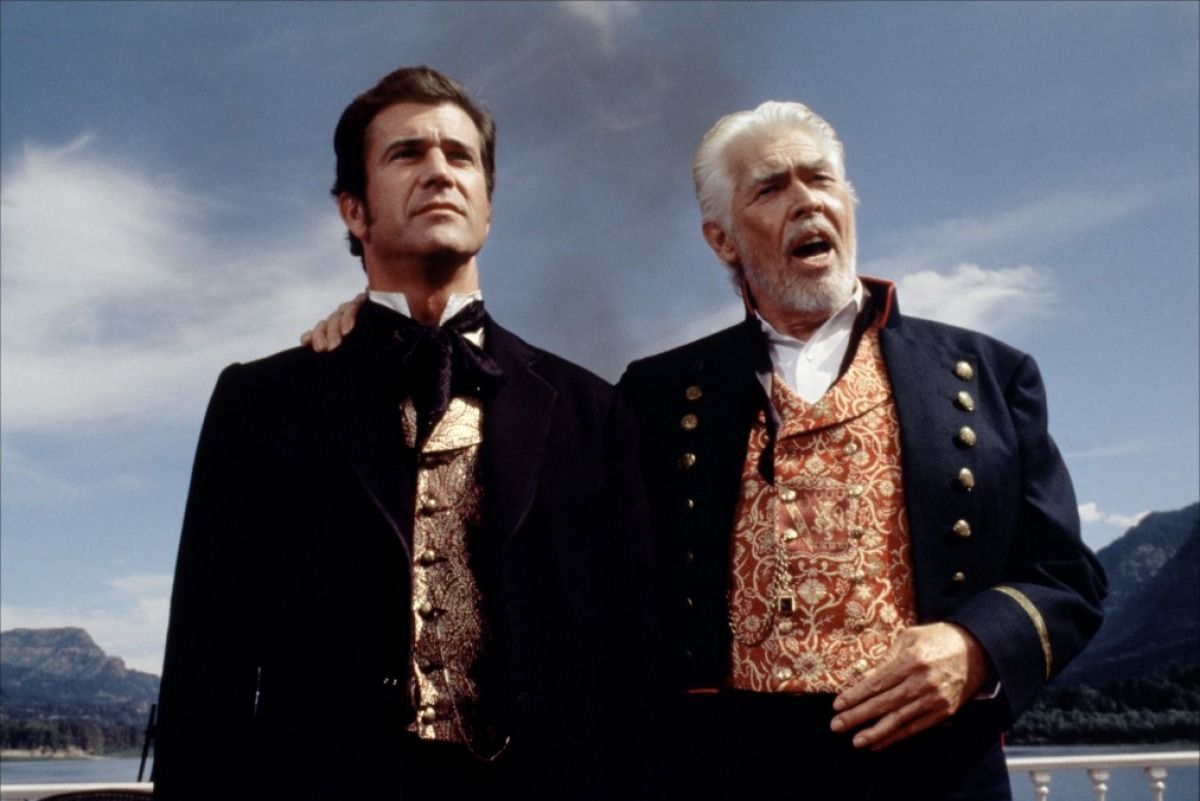 That doesn’t mean he doesn’t give a great performance as the Commodore. James Coburn almost always knows just the right menacing grin or devious head tilt to do to unsettle the audience. In this case, his guarded actions and mysterious nature lends an air of uncertainty to his character that immediately tips off the audience.

So, when we find out that the Commodore is in kahoots to steal the $500,000 from the poker championship, I have to say I wasn’t really surprised. I would have been more surprised if the Commodore was a good guy all along. But, because it was James Coburn instead of literally anyone else, I already had a hunch about his intentions.

Marshal Cooper is a Thief

Marshal Cooper’s sudden shift in character was actually quite the plot twist and one I wholeheartedly applaud. It wasn’t entirely out of character, as we had seen him treat Maverick’s character with great disdain worthy of a criminal. Yet, it was still surprising enough that no one saw it coming until Marshal Cooper had the $500,000 and a gun in his hands.

The signs are there from the beginning, if one knows where to look. Marshal Cooper just happens to show up in Maverick’s life a few days before the poker championship, causing Maverick a lot of grief and worry. He just happens to be a marshal, but no one has really heard of him and or knows where he comes from. It’s all pretty obvious after a rewatch, but hard to spot the first time seeing it.

It does make me a little sad to see what seems to be the one morally good character in the film corrupted, but it fits the theme well. We see many throughout the film turn out to be no-good backstabbers and money grubbers, so it’s only fitting that the man who seemed best of all was just like the rest of them. Even though James Garner should never be a bad guy in my book.

Marshal Cooper is the most surprising character in the film. He goes from a no-nonsense lawman to a shifty outlaw all in just a few days. However, the most shocking twist of all is when he reveals himself as Maverick’s father. While I think the reveal is hilarious — Maverick supposedly quoting his father while lounging in a steam bath and Cooper angrily dunking him under the water and saying that he never said that — it just doesn’t make sense.

Image via The Movie Scene

It just seems odd that there really aren’t any clues pointing us to this conclusion throughout the film. No glances, no slip-ups, and no real family resemblance until the end. What’s even more baffling is that Annabelle Bransford somehow knew all along as well.

This final plot twist just seems to be tossed in at the last moment to have a funny father-son bonding moment. If there had been at least one clue that pointed to this in the end, it would have been more palatable. However, there are no clues pointing to this outcome and it seems like the whole idea was poorly contrived by the screenwriters.

I won’t say that the plot twists in Maverick were horrible. On the contrary, the plot twists added an entertaining element to an amusing film. The plot and characters twisted and turned so much that one could never be bored during the film.

However, some of the twists were not thought through very well and felt more like when I end a story with “and then I woke up” and think I’m a literary genius.

But I won’t rag on this film. Mel Gibson, Jodie Foster, and James Garner create a hilarious comedic trio. Maverick breaks genre stereotypes by creating a top quality western with horses, guns, and poker, while also making it pretty funny for a western. While the twists don’t always hit the mark, they do add excitement to a film with high rewatch value.

Thank you for reading! What are your thoughts on Maverick and its plot twists? Comment down below!

I disagree. There actually are multiple times when the father/son relationship is foreshadowed. A few of them include:

The genuine concern Coop shows for Bret when he’s hanging off the side of the cliff – and then even after Bret told him to “never help me again” when Coop returns to help (after enjoying Bret’s pleas a bit) Coop is very fatherly in how he helps Bret finally get up. Right up to his unfinished statement: “Ungrateful …” (As in ungrateful child, but he doesn’t verbally finish the statement out loud)

As they are burying the stagecoach driver Bret launches into “Amazing Grace” and Coop not only joins him but also shifts immediately into a harmony line – as if they’ve sung the song together before at other such sad events.

When the trio sneak up on the fake Indian bandits and Coop very genuinely pledges his support of Bret (unlike the wagon wheel incident) because “that was about broken bones, this is about dying”. Garner delivers the line with clear and real concern in his voice and the expression on his face. Sure he downplays to Annabel when he actually does back-up Bret; but point is that he does it.

Then there’s Bret’s departure with the Indians. Only Bret knows that they are actually his friends and that he will be totally safe with them. Again, look at Garner’s face and observe his expression as Bret climbs on his horse and Coop tosses him the reigns. Coop tells Bret to take care of himself, but the look on his face and in his eyes is again the genuine concern that we saw at the cliff.

Coop consistently demonstrating such concern toward Bret in those truly serious situations only make sense when you understand their true relationship that each of them are keeping hidden for the sake of the scam they are running.

So I feel the movie is littered with these clues, and yet they are laid out so very subtly that the reveal at the end was still a surprise. Which I loved.

You missed the point about the final reveal of Coop to be Maverick’s father (or at least you didn’t explain it adequately). The point is James Garner played Bret Maverick on the TV show. That Coop, in fact, would turn out to be Bret Maverick Sr. (and not Zane Cooper) is a real hat tip to the older members of the audience who loved the TV show.

Oh no I totally understood that! I just felt that there wasn’t enough evidence pointing towards that reveal.

The Danny Glover cameo is also accompanied by the guitar riff from Lethal Weapon.

I didn’t catch that! Lol that’s way funny though

Not to mention that when he leaves, Glover’s character mutters “I’m too old for this s—,” his signature line in Lethal Weapon.