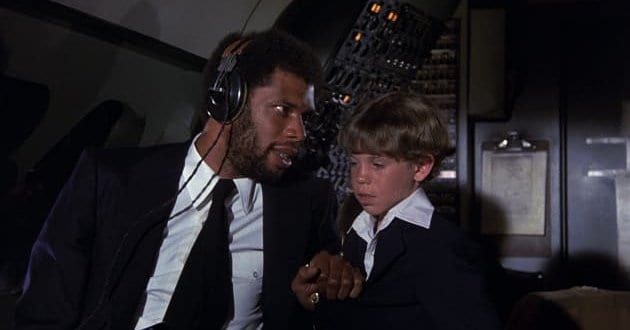 Cameos are always fun — especially cameos from our favorite athletes, actors, and singers! Even if a celebrity is on screen for only a few seconds, it’s enjoyable to try and spot them. They may add something to the story, they may not. One thing’s for sure — they always make a movie a little more interesting.

Some of the best cameos can come from celebrities who aren’t even actors. Some of my favorite cameos come from professional athletes like Shaquille O’Neal and Yogi Berra. Sure, it’s never especially great acting, but it’s always fun to see a familiar face!

Brett Favre in There’s Something About Mary (1998)

I tend to avoid any movie starring Adam Sandler because I find the man interminable. However, I do enjoy watching The Waterboy to see the Lawrence Taylor cameo because I find it ironically amusing. In his short appearance, Taylor introduces the slow-witted Bobby Boucher Jr. (Sandler) to a group of young football players. After listening to Bobby struggle through a simple sentence, Taylor tells the kids, “Don’t smoke crack.” Big words coming from a man who used to smoke crack during his own professional football games as a linebacker for the New York Giants. Yet, his short performance raises this festering mess of a movie to at least a watchable level for a few minutes. 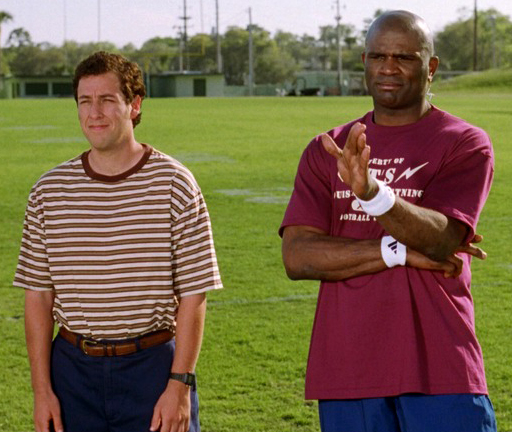 While Kicking & Screaming is your run-of-the-mill family sports film, it has something most other family sports films don’t have — Mike Ditka. The Super Bowl-winning coach and former tight end of the Chicago Bears plays himself alongside Will Ferrell as the coach of a little league soccer team. Yes, it is about as ridiculous as it sounds, which makes it all the more hilarious. For a professional athlete, Ditka has excellent natural comedic timing. In most cases, athlete cameos should never go beyond a brief appearance, but I’m glad director Jesse Dylan decided to keep Ditka on for a majority of the filming because the movie wouldn’t have been the same without him. Kicking & Screaming really doesn’t hit the level of cinematic greatness it could have achieved, but it sure is a funny movie.

Talladega Nights is just as stupid as The Waterboy, but I find Talladega Nights slightly more palatable, probably because it doesn’t have the trademark Adam Sandler lisp. Will Ferrell and John C. Reilly are hilarious as always as teammates. I don’t know what it is that’s so funny about this film — the dumb situations they find themselves in, the absurd one-liners that I giggle at every time, or perhaps the characters’ personalities — but it works and creates a stupidly funny film. Famous NASCAR driver Dale Earnhardt Jr. makes a brief cameo in this film; blink and you’ll miss it. However, Earnhardt’s cameo adds that beloved hillbilly atmosphere to a movie that really couldn’t get any stupider or funnier. 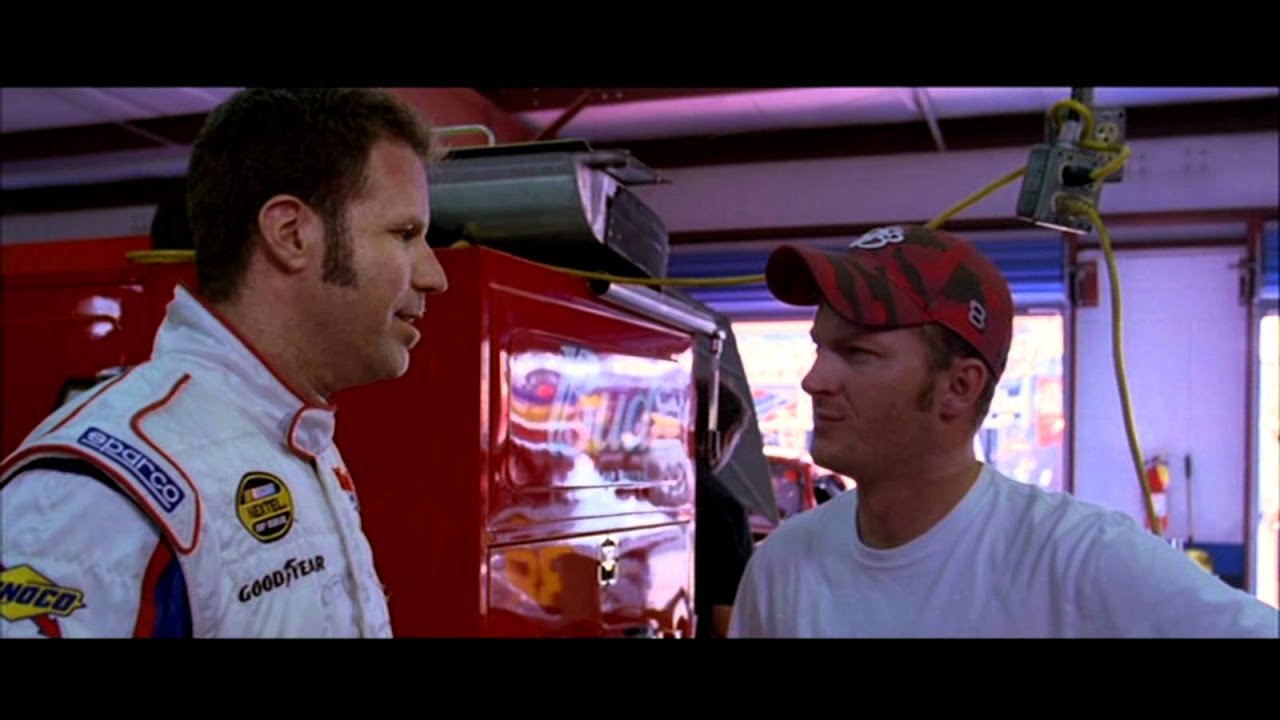 And yes, NASCAR does count as a sport. If speedwalking is a sport, NASCAR is a sport.

Space Jam is just a giant fever dream with product placement, honestly. Nothing seems to logically follow anything — there’s Looney Tunes, Monsters, and NBA players all playing basketball with one another. Director Joe Pytka could’ve thrown in Fat Albert and I would have just gone along with it. Yet, Space Jam is a fun throwback to what I consider the NBA’s golden age. NBA stars Shawn Bradley, Charles Barkley, and Patrick Ewing star alongside powerhouse Michael Jordan. However, I think the standout performance comes from a man who looks like a jockey rather than a basketball player — Muggsy Bogues. Famously the shortest person to ever play in the NBA, Bogues is a fun addition to an equally fun film that has surprisingly high rewatch value.

For the first dramatic film on my list, I dive into The Dark Knight Rises. During the suspenseful football stadium scene, Pittsburgh Steelers’ wide receiver Hines Ward dons the yellow and black once again. As Bane blows up the stadium, Ward runs the ball from one end to the other, scoring a touchdown (though I’m not sure if it counts when the world is violently exploding and reverting back to anarchy). A short cameo to be sure, it’s still an interesting one, as cameos usually aren’t normally found in top-notch action films like The Dark Knight Rises. Ward’s cameo does something that every Batman film tries to do in someway — connect with cold reality. DC’s darker superhero films always have a depressing streak of reality running through them, but the addition of the incredible athlete Hines Ward seems to hit it home harder in the conclusion to the Christopher Nolan trilogy.

Don’t worry guys, I didn’t forget about Larry Bird’s cameo in Space Jam. The champion forward of the Boston Celtics has a couple small cameos in this wacky film. These cameos don’t add much to the film, but it is a fun addition to an already entertaining film. It’s obvious Bird isn’t one for acting, but the deadpan delivery of his more humorous lines is quite funny. Plus, it’s interesting to see four powerhouses of different arenas all together in one shot: Larry Bird, Michael Jordan, Bill Murray, and Wayne Knight. It’s never a combination I would’ve dreamed up, but one I am glad exists. Space Jam would not have slapped as hard as it did if it had not been for these cameos, chief among them Larry Bird. 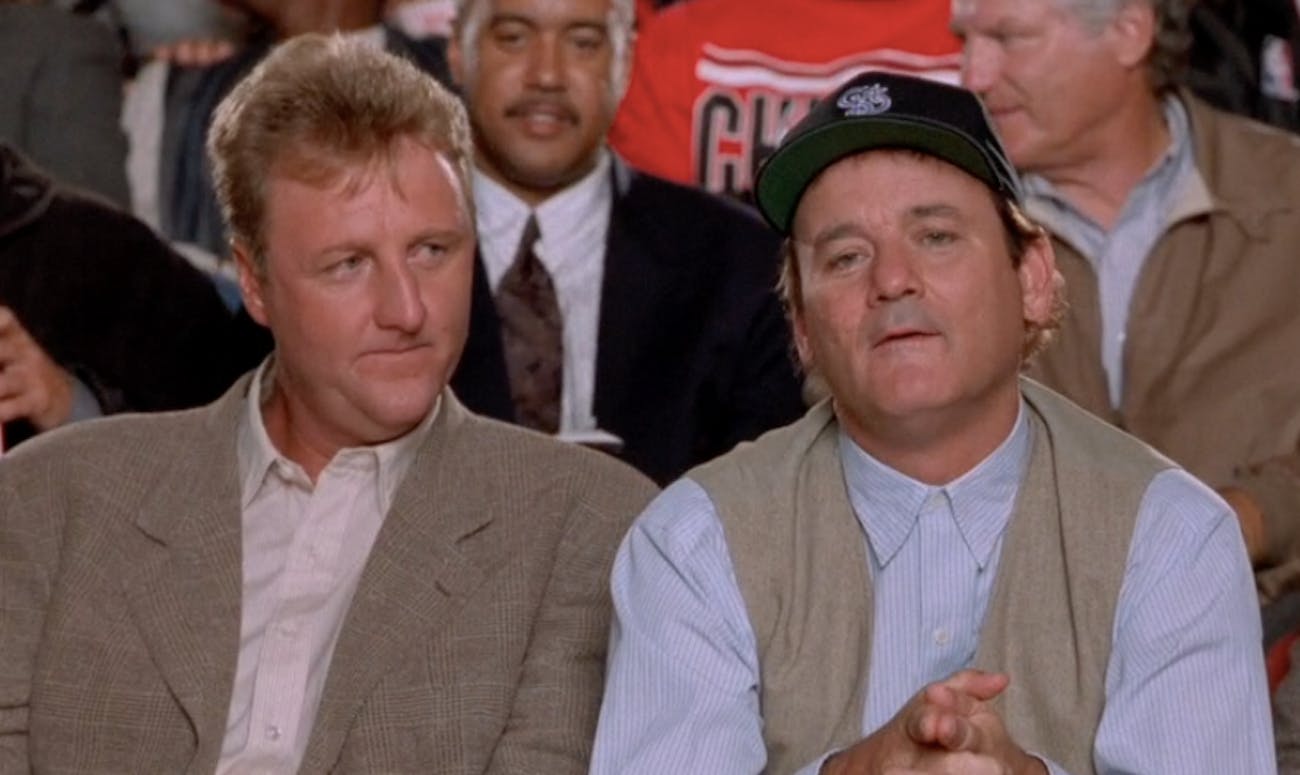 Leslie Nielsen is one of the funniest comedians that ever lived. The Naked Gun is a wonderful example of what happens when you put an off-the-wall guy in an off-the-wall situation and let him loose; The Naked Gun is about foiling the assassination plot of Queen Elizabeth II, as if Leslie Nielsen by himself in a completely normal situation wasn’t funny enough. O.J. Simpson is also a big part of the film, as the attempted murder of his character is what sets the whole film off. While I can’t speak to his later actions, I can say that the former running back for the Buffalo Bills was surprisingly adept at physical comedy and shows so with an extended sequence in this film wherein he stumbles around a ship. His presence makes The Naked Gun even funnier, something hard to do with this hilarious film, even if it has probably aged the worst out of all of the cameos on this list.

Yes, I did include another Leslie Nielsen film. I think the man was a comedic genius and also had some of the best athlete cameos incorporated into this films. Not to mention that his films in and of themselves are probably some of the best comedic films ever; films like Airplane! were just so full of dumb puns, wordplay, and random one-liners that it’s hard not to laugh at them. In Airplane!, Kareem Abdul-Jabbar, former Los Angeles Lakers player, is the co-pilot of the ill-fated plane. During a tedious question-and-answer session with an annoying little kid, Abdul-Jabbar makes some dated NBA references that are still pretty funny to sports fans today. Also, the idea that an NBA player could have a double-life as an airplane pilot is hilarious to me. 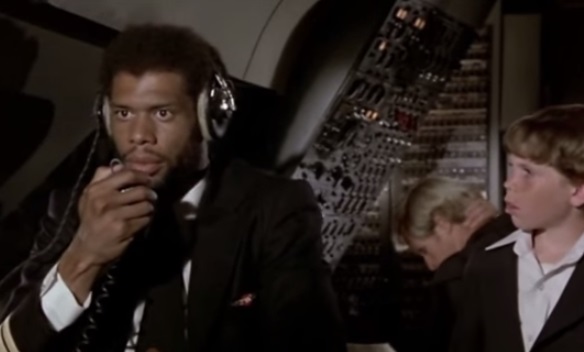 That’s right — I included the same movie twice. But Reggie Jackson’s role in this film is outrageous and I love it every time. To top off this ridiculous film, we learn that the right fielder of the California Angels is being mind-controlled to kill the Queen of England. It’s near impossible not to crack up at the absurdity of Reggie Jackson’s robotic walk to the Queen and the complete obliviousness of everyone around him. I especially love the addition of the all-out baseball melee that occurs because it really captures the American spirit of baseball. I’m going to say it again: Leslie Nielsen films sure knew what to do with their cameos. Even if the athletes in the films couldn’t act at all, they always had a solidly funny plot and great costars to lean on.

Image via The Big Lead

Before I go into Major League, I need to tell you that my all-time favorite baseball team is the Milwaukee Brewers. Thus, the addition of the former catcher Bob “Mr. Baseball” Uecker is my all-time favorite athlete cameo. The longtime announcer of Brewers’ games announces the games of Major League‘s Cleveland Indians, adding some pizzazz and familiarity to a story we already love. With Uecker’s colorful, often amusing announcing, Major League moves from just an average baseball, Cinderella story film to a classic sports film. It doesn’t hurt that Major League is heavy on 80s-90s tunes that add a nostalgic feel to a fantastic film. Though he isn’t known for being a player like all these other athletes, he is still a part of the sports world and deserves to be here.

Thank you for reading! What are your thoughts on the Top 10 Athlete Cameos? Comment down below!

What a fun post, thanks! I knew some of these cameos, but not all of them!

This is pretty good. I myself am starting a blog. click on the link to see!
https://entertainmentoverload.home.blog

After reading your article, I had to chime in on a few things. As a Western Pennsylvanian, a Steelers fan and as a comic book fan, it’s not just Hines Ward that cameos as a member of the Gotham Rogues. Several other notable Steelers appear briefly as members of that team. In addition to Ward, the list includes as follow: Quarterback Ben Roethlisberger, Offensive Guard Willie Colon, Center Maurkice Pouncey, Tight End Heath Miller, Wide Receiver Mike Wallace, Defensive End Aaron Smith, Nose Tackle Casey Hampton, Linebackers LaMarr Woodley & James Farrior, Safeties Troy Polamalu & Ryan Clark and even Head Coach Bill Cowher. Just the fact that Nolan and company chose Hines Field as the Gotham Rogues’ home stadium is a nice notch for me.

Also, I live within a reasonable distance from Cleveland. Ohio, so there are some Indians fans in my neck of the woods. As such, I also enjoy Major League for its quotable lines, memorable scenes and likable characters.

To wrap things up, it’s been a long time since I last saw Space Jam, so I’ve gotta revisit my past. Airplane is still as hilarious of a spoof of the film “Airport”, Naked Gun is also a laugh riot, I’ve only seen The Waterboy once a long time ago & I’ll have a hard time going back to that, and Kicking & Screaming doesn’t interest me that much, but Talledega Nights looks peculiar enough to me.

Incredibles 2 Entry Survey – How Does the...