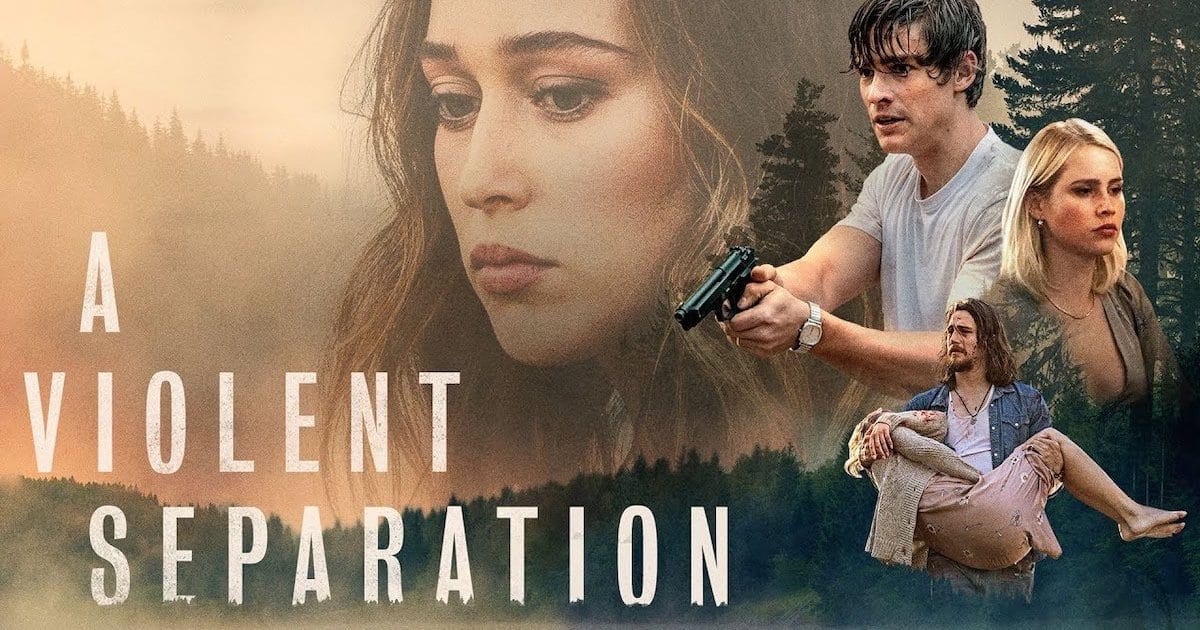 Mix two directors, young attractive leads, some good performances, nice cinematography, and a made-for-TV vibe, and you get A Violent Separation. While this movie has some things going for it, there was clearly an untapped well of potential beneath the surface.

The following review will be spoiler free. The trailer below, however, gives away major plot points, so be warned.

It’s 1983 (for some reason). Norman Young (Thwaites) is a Sheriff’s Deputy in a small Missouri town, elder brother Ray is a carousing troublemaker (Robson). Sisters Frances (Debnam-Carey), and Abbey Campbell (Holt) are nearly as different from each other as the Youngs are. Frances is a somewhat shy homebody, while Abbey is more outspoken, and takes more dangerous risks. The Young brothers’ involvement with the Campbell sisters is complicated, to put it mildly.

A tragedy affecting both families occurs fairly early on, and the rest of the film is spent dealing with its aftermath. While local Sheriff Ed Quinn (Levine) tries to make some sense out of a situation he pegs as fishy from the start, Deputy Young is left juggling a heavy secret, doing his job, and devoting himself to Frances.

A Violent Separation was directed by brothers Kevin and Michael Goetz, the sons of prolific character actor Peter Michael Goetz. You may know the elder Goetz from Jumpin’ Jack Flash, My Girl, Glory, or the Father of the Bride movies. Peter Michael Goetz appears in an extended cameo of sorts here, and it is quite a joy to see him pop up. His character, Riley Jenkins, almost qualifies as comic relief. In an otherwise melodramatic tale, it is a very welcomed break. He’s a lot of fun.

While we are on the subject, Francesca Eastwood, daughter of actor/director Clint Eastwood and actress Frances Fisher, is also in this movie. Initially, her character, nicknamed El Camino (she drives one) is only there as eye candy, and to be one side of a love triangle. Thankfully, her character becomes more of a person as the story progresses. El Camino ends up being kind of a sympathetic character because she isn’t treated very well. However, I think we (the audience) were meant to hate her. On a personal note, Eastwood’s inclusion in explicit sex scenes was uncomfortable for me, considering the last time I saw her was in True Crime when she was six years old. Yikes.

Ted Levine is a National Treasure

I have seen Ted Levine in several roles over the years (Silence of the Lambs, Bullet…), and he has always impressed me. I don’t think it is an exaggeration to say he is the best thing about this movie. Not only is his performance stellar, but his character is arguably the most captivating, and well-written. Levine’s Ed Quinn is a Sheriff who has definitely chosen the correct path in life. He has a naturally inquisitive nature, an eye for detail, and a gentleness that puts people at ease. He may be treating you kindly, but rest assured, he is on to you. Ed, like the Young brothers, also grapples with how to handle the events of the story. He figures out what is going on relatively quickly, and the rest is trying to prove it.

Quinn’s personal loyalties, and his sense of duty, battle it out for most of the runtime, and you can see it. His expressions and physicality express so much of what is going on inside, and it is brilliant. I would easily watch a television series about Ed Quinn. In fact, I theorize this script initially centered on him, but while shopping it, somebody decided to fill the movie with younger people. It is almost as though a show about Quinn and a “teen drama” about the other characters had a crossover episode.

You may be wondering why I brought up television while discussing this movie. It’s because this looks and feels like something made to air on TV. I have taken into account that this is an independent film, and they work differently than big studio releases. Even so, the set decoration, cinematography, and even the cast (most of whom are known for television shows) make A Violent Separation not quite cinematic in nature. Granted, it looks like higher-budget TV, like The Walking Dead (the spin-off of which happens to star Debnam-Carey), or the Fargo series, but TV nonetheless. One can’t help but wonder if this was initially planned as a mini-series, or if there is a hope that Netflix will pick it up for wider distribution.

It is sometimes hard to place blame when things don’t go quite right in a movie. Many people say the quality of a film is all about its director(s), and that even lackluster acting can be blamed on lack of direction. However, I am of the opinion that a film is more of a collective effort than that. Not as much as, say, a play, but a collaborative, nonetheless. So, basically, everyone can share some credit or some blame, for what does or doesn’t work. That is what I would say in the case of A Violent Separation. There are just marks that aren’t being hit, here. And it’s pretty much everyone… well, other than Ted Levine.

Debnam-Carey, Thwaites, and Holt are all from Australia, Robson from England. They should all be commended for their ability to put on American accents, as there is never even one slip up where their native dialect comes through. That said, they all seemed so distracted focusing on their voices, that their overall performances wavered a bit. None of them are what I would call bad, but they aren’t exceptional, either. They’re forgettable, which is not something one usually says about a film’s lead actors.

None of the characters are as developed as they could (or should) be, and that is frustrating. We need to dig a little deeper into who these people are, and what motivates them. This movie clocks in at one hour, 46 minutes, but even a runtime of two hours even may have added enough wiggle room to flesh things out a bit. It needed something more, but I can’t quite put my finger on what that might be.

While this isn’t exactly a bad movie, it had the potential to be so much better than it was. The story should have been a lot more compelling, given the subject matter. It needed more emoting, more action, more tension. More content in general. By the end of this movie, one gets the sense that things have been left unsaid, avenues have gone unexplored, and some loose ends have not been tied up. By the time the credits roll, we have almost already forgotten most of the characters and performances. And that is a shame.

P.S.: I’m all in for a story centered on Sheriff Ed Quinn. Just putting that out into the universe.

Thank you for reading! What are your thoughts on A Violent Separation? Comment down below!