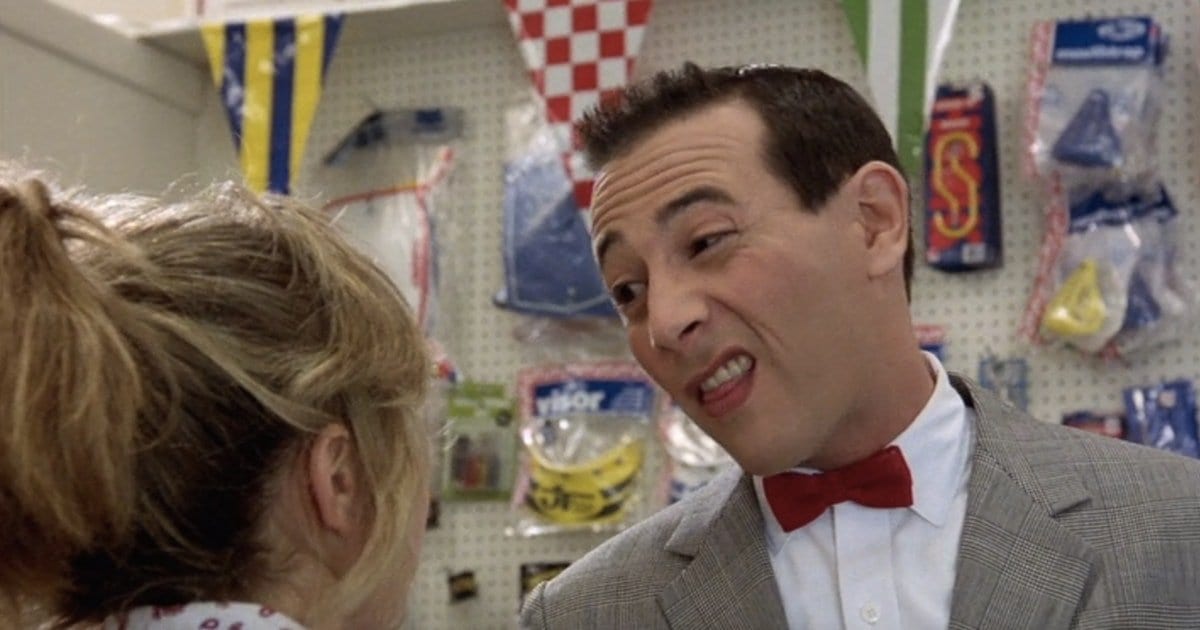 Phil Hartman was a truly multi-talented entertainer, perhaps best known for his work on television. After all, Saturday Night Live, The Simpsons, and NewsRadio are what made him a household name. However, one should not discount the impact he made on the big screen. This Monday, September 24th, would have been Phil Hartman’s 70th birthday, so it seemed like a good time for reflection. In celebration of the man, MovieBabble takes a look back at some of his most iconic movies.

This is at the bottom, simply because it’s kind of a cheat. Phil Hartman only had a cameo in Pee-Wee’s Big Adventure, as a news reporter during the drive-in scene. However, Hartman co-created Pee-Wee Herman when he and Paul Rubens (who portrays the character) were in The Groundlings improv group together. He also co-wrote the script to Pee-Wee’s Big Adventure: both the original version (which was a re-imagining of Disney’s Pollyanna), and the final one (sort of a take on The Bicycle Thief).

The movie itself is an absolute cult classic, and the first full-length feature directed by Tim Burton. The story of Pee-Wee’s cross-country journey to find his beloved stolen bicycle was like Citizen Kane for kids growing up in the 1980s. No, really, we thought it was the best thing ever. In fact, most of us (now in our 40s) can still quote entire passages of the dialog. As it wouldn’t exist without Hartman, one can easily make the case that this was as much, “a Phil Hartman movie,” as anything he actually starred in. 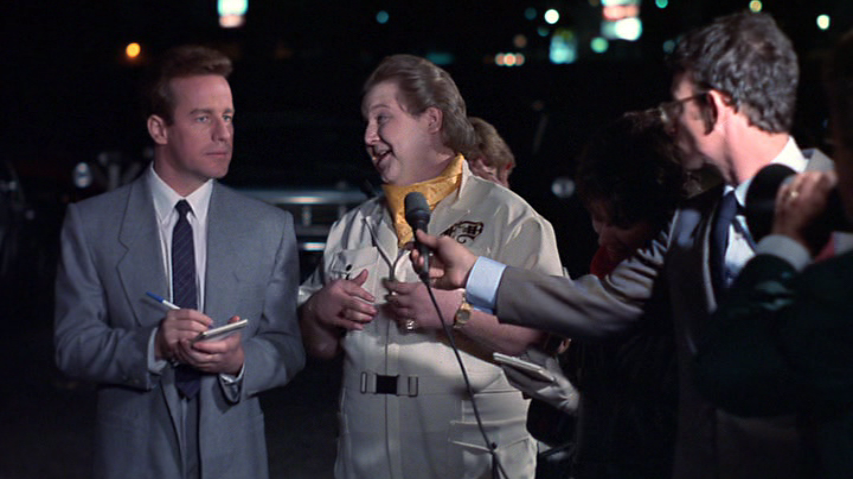 Arnold Schwarzenegger, Sinbad, and Phil Hartman. Together. In a movie about the frenzy that surrounds the proverbial “it toy” everyone is trying to purchase for the holidays. It also features Jake “little Anakin Skywalker” Lloyd, as Schwarzenegger’s son. I mean… how can you turn that down?

You may have gathered this is not a favorite of mine. Then again, I’m not much on Home Alone, either, which is similar in tone to this one. As with Home Alone, Jingle All the Way is considered required holiday watching by many people, so it warranted a spot on this list. It also made the list because Phil’s character, Ted is just such a jerk, he’s fun to watch (and was probably a lot of fun to play, too).

While Blind Date, a Blake Edwards comedy starring Bruce Willis, Kim Basinger and John Larroquette, isn’t exactly well-known, it does have some very funny moments. Many of said moments come courtesy of Phil’s character, Ted Davis (brother to Willis’ Walter), a car salesman who embodies stereotypes of the profession. In other words, smarmy and ethically challenged. So many of Phil’s best characters fit that description, because that’s the type of role he loved to play. His biggest role model when he got into acting was Bill Murray, who is basically the sultan of smarmy, so it stands to reason.

This movie is just downright clever. It was the first movie I can remember seeing where I genuinely didn’t see the twist coming (I won’t spoil it here).

The plot revolves around the greedy (hence the name) relatives of a well-to-do older man, each trying to ensure they get the most money when he passes away. Kirk Douglas plays said rich elder, Michael J. Fox as his favorite nephew… and Phil Hartman as an insufferable son-in-law. This is, once again, a character in the Hartman sleaze-bag wheelhouse, but it’s an absolutely perfect fit for the story.

National Lampoon’s Loaded Weapon 1 is essentially a spoof of Lethal Weapon, but plays on many general “cop movie” tropes, as well. This, as with number ten, is essentially a cameo role of Hartman’s. However, it is one of the more memorable moments of the movie. A scene-stealing Hartman plays wisecracking Officer Davis, who does a literal stand-up routine at the scene of a stand-off. It’s a very charming, albeit brief appearance.

In essence, CB4 was to rap/hip-hop what This is Spinal Tap was to rock/metal. The fictional rap group, also called CB4 (short for Cell Block 4), was a not-so-subtle parody of N.W.A., down to a song that begins, “straight outta Lowcash…” and a front man (Chris Rock) sporting the classic Eazy-E aesthetic.

Hartman’s role was that of Virgil Robinson, a politician trying to block CB4 from performing in Sacramento, California.  The group is brought to Robinson’s attention via his young son (J.D. Daniels), whom he hears rapping CB4 lyrics. He makes censoring and banning such groups the main point of his political platform. It’s a “straight man” style character, and Hartman’s portrayal is very effective.

Phil is absolutely marvelous in this movie. Yes, it’s an animated Disney movie about a toaster who misses its humans. Yes, Phil voices a scary air conditioner who sounds like Jack Nicholson, and a hanging lamp who sounds like Peter Lorre. It’s still one of the best movies he was ever involved with, and one of his better performances (or, two, technically). Just watch it. You won’t believe how emotionally invested you’ll get in the story.

Bonus points for Hartman’s best friend, Jon Lovitz, as a radio with a great “old timey” quality to his voice.

This was so early in Hartman’s acting career, he was still being credited as Phil E. Hartmann (the original spelling of his last name). Hartman(n) plays Fred, a co-worker of Whoopi Goldberg’s Terry Doolittle. He is basically present in every daytime office scene, and is quite entertaining. He even does a bit of his Frank Sinatra voice.

Even though he isn’t a main character, this is ranked highly because the movie itself is good. It was directed by Penny Marshall, and stars Goldberg, Carol Kane, Jon Lovitz… and pretty much half of the British actors working at the time. While it contains some 80s movie clichés (such as saying everything one types out loud), it holds up quite well today.

This was almost number one, but I flip-flopped the order on a whim. This was Phil’s last screen role, and there’s a sweet dedication to him during the closing credits.

The movie, in a nutshell, is about a band of soldier toys that take their jobs a little too seriously (kind of like Buzz Lightyear in Toy Story, but dangerous). It’s a blend of live-action and stop animation. Hartman plays Phil Fimple, the type of guy who is “the Joneses” the neighbors try to keep up with.

This may seem an odd choice for number one, as the movie is kind of a “family film” cheese-fest. However, Phil’s funny and sweet performance, and his chemistry with co-lead Sinbad, make this a must-see anyway. His character is essentially a good guy, he’s just lost his way in a quest to be successful. He’s also lost touch with his children by being gone so much. It’s almost as though Sinbad is Mary Poppins, and Hartman is Mr. Banks.

Also, Phil sings The Commodore’s classic, “Brick House.” That’s worth your time by itself. You’ll be hearing his voice in your head for a while, just to forewarn you. 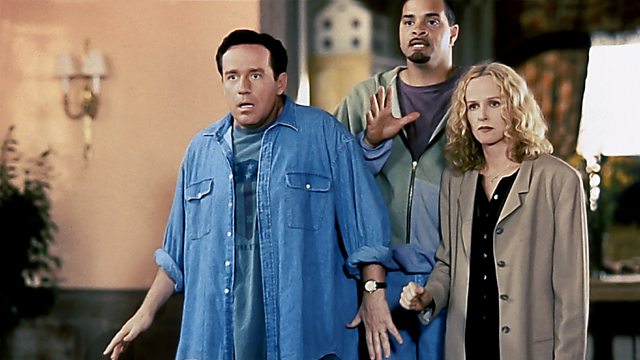 image from BBC One

Thank you for reading! What are you favorite Phil Hartman movies? Comment down below!

[…] any human who stands in their way. Besides the excellent cast — even involving the late great Phil Hartman in his last role before his tragic murder — it also features excellent voice work from Tommy […]