The 80th Anniversary of ‘Only Angels Have Wings’: Jean Arthur vs. Howard Hawks 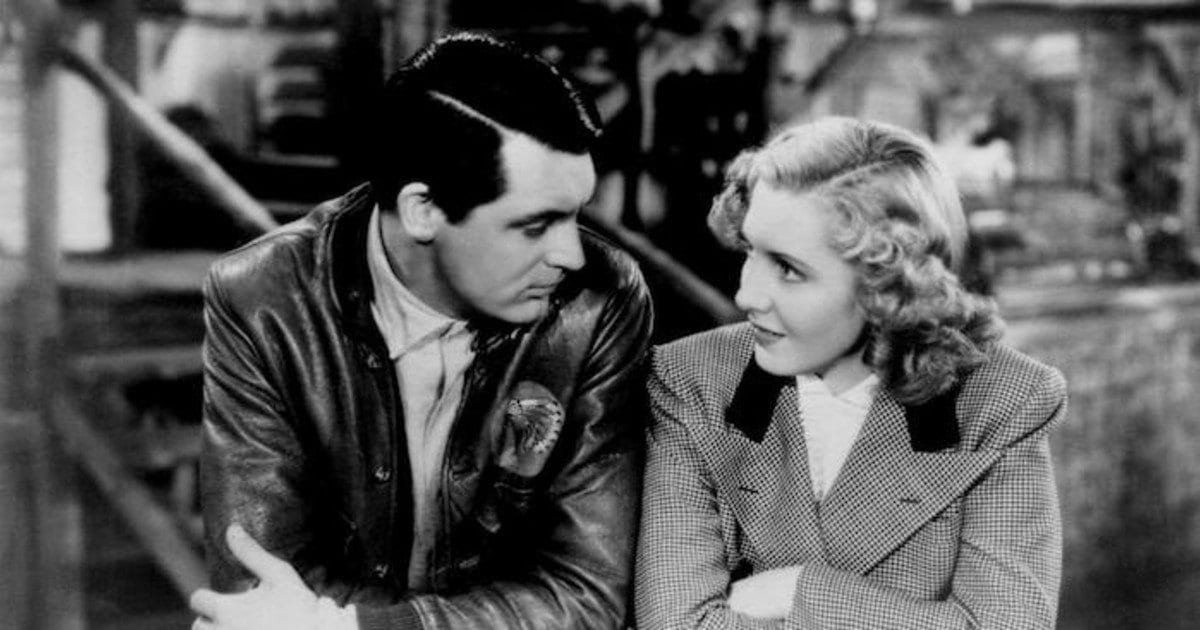 Actress Lauren Bacall, from the classics To Have and Have Not (1944) and The Big Sleep (1946), is the quintessential noir actress — and an embodiment of director Howard Hawks’ ideal woman. The type she projected was of a worldly, sharp, quick witted vixen who could get along with the boys while maintaining her femininity. Most memorable is the icy, sharp gaze Bacall flashes Humphrey Bogart in her first film, To Have and Have Not. In all of Hawks’ films, from Bringing up Baby (Katharine Hepburn) to His Girl Friday (Rosalind Russell), the titular female character lines up with Hawks’ ideal to varying degrees.

His 1939 film, Only Angels Have Wings, features Jean Arthur (Bonnie Lee) alongside Cary Grant (Geoff Carter), and his female star proved to be stubbornly immutable. Arthur plays a showgirl (Bonnie Lee) who finds herself in South America among a crew of pilots who operate a struggling airline that embarks on flights even during inclement conditions. With Arthur, Hawks endeavored to put his usual female fantasy on the screen. But the famously relatable, even child-like actress found it difficult to fit the Hawksian mold.

As we celebrate the 80th anniversary of Only Angels Have Wings, we’ll look at Jean Arthur’s unique screen presence and her dynamic with the legendary director. 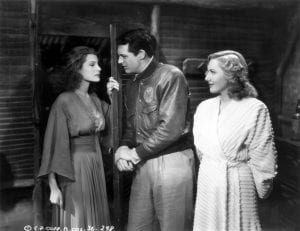 Image via Hometowns for Hollywood

During the making of Only Angels Have Wings, Hawks set out to remodel not only Jean Arthur, but a new and upcoming celebrity, Rita Hayworth. Famously, Hayworth had been made over before co-starring as Bonnie’s competitor, Judy MacPherson. The makeover eliminated some of the Spanish actress’ Mediterranean features by moving her hairline higher, bleaching her skin, and changing her hair color from black to auburn.

Despite the efforts made to transform Hayworth into a starlet, Hawks believed she was a terrible actress. In spite of his harsh opinion, he resolved to make Only Angels Have Wings her breakthrough film. The process involved some toil and resulted in Hayworth’s poor treatment by Hawks during shooting.

Hawks’ interest in seeing his perfect woman on the screen parallels a similar controlling tendency in director Alfred Hitchcock — who became keen on creating remote, stoical blondes in the films he made in the ‘50s and ‘60s. So desirous was Hitchcock of his fantasy woman that he abused an inexperienced Tippi Hedren during the making of her second film The Birds.

Though Hawks may never have reached Hitchcock’s level of obsession, he seemed similarly intoxicated by the power of a director. Indeed, Hawks once said that he preferred working with new actresses over established ones. The new actresses proved less demanding and he bragged, “Carole Lombard, Rita Hayworth, Angie Dickinson, Lauren Bacall.  All of them made their first picture with me.” Yet Hawks’ irascibility and dominant ways didn’t make Jean Arthur more amenable.

Conflict Between the Actress and Director 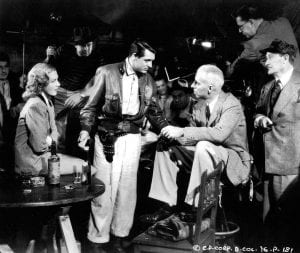 In all her films, Arthur exudes an uncanny child-like honestly and playfulness. It appears starkly enough in her screen test for Gone With the Wind that she couldn’t quite capture the spirit of the manipulative southern belle, Scarlett O’Hara.

So it is the case in Only Angels Have Wings. As the trailer says, Bonnie “steps out of the fog with a questionable past and a devil may care future.” But this Bacall-esque persona isn’t evident in Arthur’s vivacious, yet down to earth performance. No matter what the trailer tried to convey, on the set, Hawks grew frustrated with Arthur for her inability to grasp his direction.

But this wasn’t the first time Arthur had proved difficult on a film set. Though she lacked a diva’s temperament, she was plagued with camera shyness and earned a reputation for being aloof and uncooperative.

Despite her insecurities, she was devoted to the craft of acting and focused on the art more than the publicity. She avoided interviews and refused to appear in films if she didn’t like the script, regardless of her contract with Columbia Pictures.

Her resistance to fame seemed to imbue her with the strength of independence. She put her movie career on hold to attend college, and later on, she exulted in her freedom when her contract ended at Columbia. Given that she was unusually grounded, she didn’t affect personas that contradicted her own very readily. According to her biographer, John Oller, Arthur “feared losing her own uniqueness” and was chiefly concerned with maintaining her individuality.

Perhaps it was her devotion to authenticity that made her performance in Only Angels Have Wings warmer and more charming than it might have been with a typical Hawksian leading lady.

Why Look Back at Only Angels Have Wings?

Although Jean Arthur is better remembered for her roles in Mr. Smith Goes to Washington, Mr. Deeds Goes to Town, and a number of screwball comedies, Only Angels Have Wings is worth remembering as a gripping drama — one of the few Arthur is known for. The dichotomy between the emotionally invested Bonnie Lee and the peremptory (and much like Hawks in temperament) Geoff Carter creates a screen dynamic that was unique for both Cary Grant and Jean Arthur.

When Bonnie arrives at the airport, she becomes the darling of many members of the crew, except Geoff, and immediately a pilot named Joe takes a liking to her. The two become friends just before Joe heads out on a dangerous, and ultimately fatal, flight. As Bonnie openly grieves, the men deal with the tragedy by pretending the man didn’t exist.

Bonnie’s struggle to understand the airport’s rough and tumble culture, and Geoff the brusque alpha, could easily parallel Arthur’s on-set rapport with Hawks.

For any classic movie buff, Jean Arthur is a noteworthy actress who should be celebrated for her resistance to entertainment convention and her commitment to her craft.

Thanks for reading! Have you seen Only Angels Have Wings? If so, leave a comment below!

An Interview with Thomas Griffiths, Director of ‘Autism:...