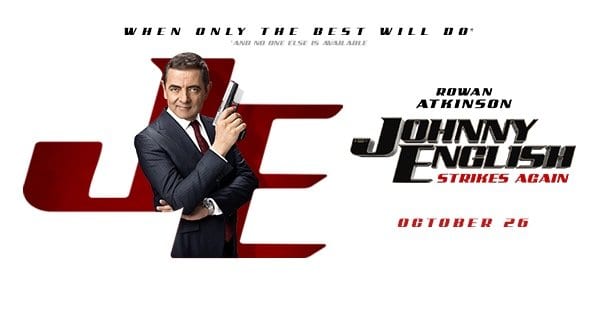 Who knew that we’d see Rowan Atkinson return to the world of secret spies in Johnny English Strikes Again? The 2011 sequel Johnny English Reborn was already an unexpected follow-up. I asked myself if anyone asked for this, but the question I should be asking is another one entirely: will anyone care? From the looks of it, the film will drive enough interest as it hits on all the marks to appease to its target demographic.

Quick! A hacker attack exposed every MI6 agent to the world! What do you do? You call in a retired agent, that’s what. Some would say he’s the best, others will urge that he’s the worst, but nevertheless, it’s up to Johnny English to uncover who the evil-doer is before he or she endangers England and possibly the rest of the world. All lives depend on this guy.

Only Mr. Bean can defeat Thanos!

I was looking forward going into this film. I’ve only seen the first 5 minutes of the second movie. Despite my meager history with the franchise, I craved a satisfying comedy that got out a few chuckles.

The series lies in a weird spot. Each film came out at least 6 years apart from its predecessor with a different director of an unimpressive filmography at the helm. This time around that mantle went to David Kerr. Yup, I haven’t heard of him either. His area of expertise lies in TV with this movie being his cinematic debut. It’s not an impressive choice, but with a franchise like this one, the shoes aren’t too big to fill-in.

Gags Are the Highs…and the Lows

I’d be lying if I didn’t admit I laughed more than expected. This movie can be funny especially if you’re a fan of British comedy. Some may find it too predictable or simple, but in this case, Strikes Again creates the opportunity to add finishing touches in a form of clever twists or subtle jabs. image via the Indian Express

Sadly, this isn’t always the case. Some jokes don’t take these extra steps and run on for far too long. Two long sequences in particular fall on their faces despite their good intentions. It wastes the concept’s opportunity and settles for predictability. These inconveniences would be deal breakers, if not for the tone.

By the end of the day, a gag is a gag. It’s either cheaply hilarious or cheaply unimpressive. In this case, the final act predominantly goes with the latter while the first two with the former. 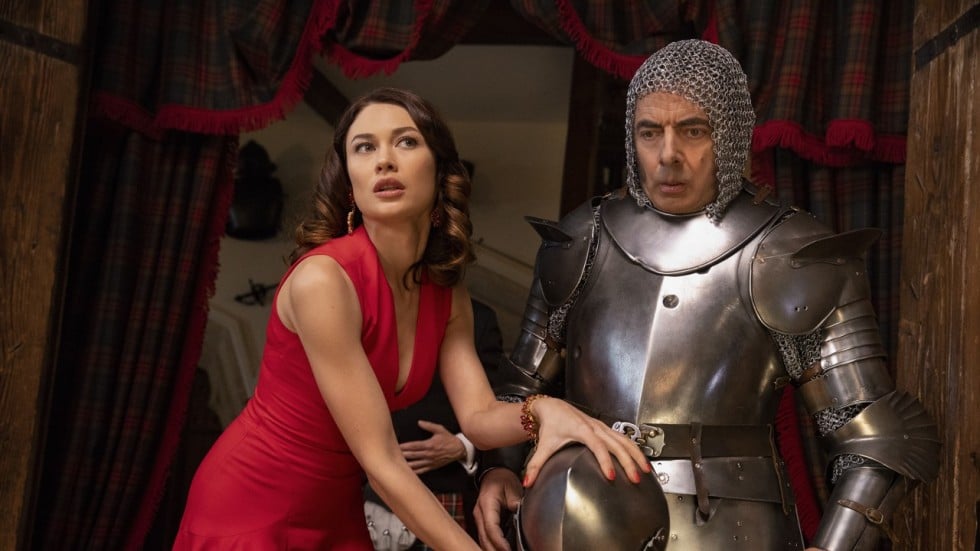 The film opens fast. It gets to the point and takes you on a fun ride. You appreciate the things it throws your way. It makes the most out of the light and silly tone. That’s it!

Johnny English is the comedic take on the James Bond franchise and it does so with its own flavor. For example, it takes the time to comment and at times make fun of today’s day and age. Johnny English is a man of his own mold. He does things the old-fashioned way, free of any safety nets, obligatory procedures or fresh tech. Things like this allow it to distance itself from a blatant parody.

Instead of effortlessly making fun of popular genre attributes, it takes its spy story elements and weaves them into the narrative as if they were their own. Even if some jokes aren’t original, the movie persists on staying away from bromidic references.

And Then the Charm Drops Out

For some reason, the final act double downs on the bad gags that were once excusable. The characters that added something to the story are now useless. Their purpose is to deliver solutions in style of ex machina. In the end, Johnny English is the only character who ends up mattering at the expense of others.

The ending doesn’t give us proper closure. It’s just…there. The director’s resume shows its unimpressive teeth in this instance. The film only lasts 89 minutes. I’m sure it wouldn’t have killed anyone if they added a minute or three to fix these issues.

Johnny English: Strikes Again perfectly deserves a viewing when it happens to air on TV some day in the future — ironic isn’t it? It’s not an insult, rather a recommendation. The movie provides a good amount of laughs that will brighten up your day even if it’s through at least one joke. All of its faults ultimately don’t dwindle your fun to the point where you will hate this movie outright.

The movie is another relish of the week. Easily entertaining, yet if you’ve seen Atkinson play his typical caricature, you won’t find innovation. Unless the mandate is to relieve yourself of any stress, there is no need to rush out to your local theater.

Thank you for reading! What did you think about Johnny English Strikes Again? Comment down below!

Aw, don’t be too hard on it! I’ve seen all three movies and they deliver what they promise, comedy spoof without nasty surprises. I thought Emma Thompson did a neat Margaret Thatcher ;)

I’m a big fan of Rowan Atkinson comedies, Blackadder, Mr Bean and Johnny English are all hilarious to me.

I’ve never seen any Johnny English film and this one doesn’t seem to be drawing me in all that much either.

I do love Rowan Atkinson as Mr. Bean and Zazu though!

Oh, this is your go-to then!