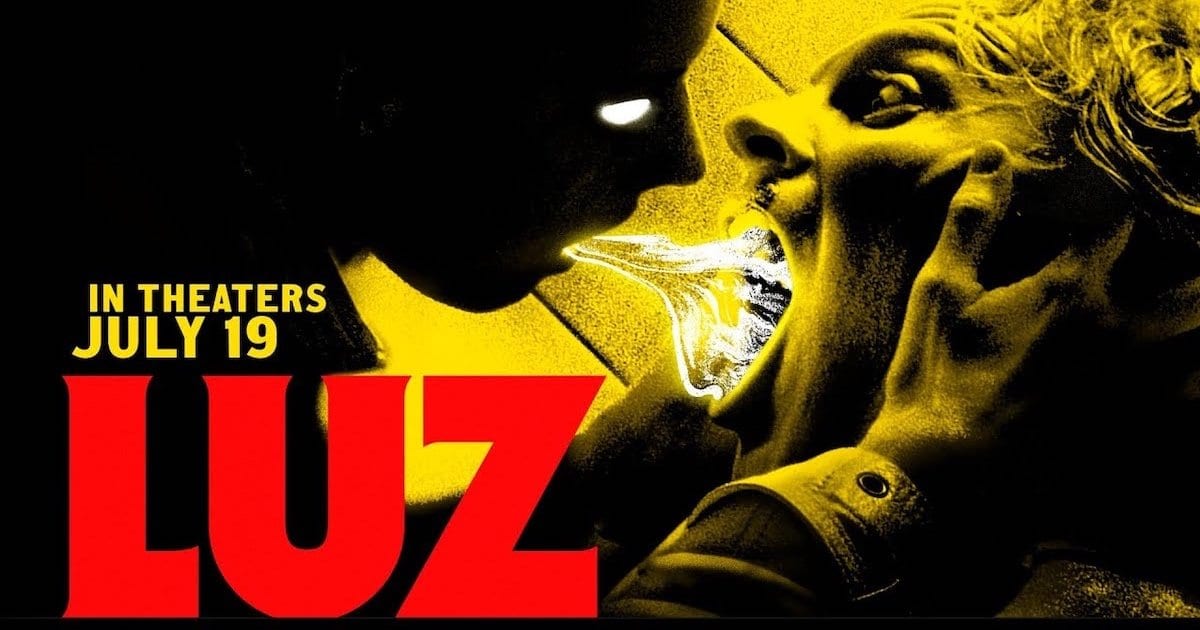 Spontaneously going to films you know nothing about is risky, but they can be the most rewarding cinema experiences you have.

Flashback to last December when I attended ParaCinemaFest, a week-long festival at my local cinema showcasing a selection of the most outlandish and bizarre contemporary genre films. It was here where I went in blind to see this Giallo-inspired, German supernatural thriller from debut director, Tilman Singer. Entranced by Luz, I immediately had the urge to see it again once the credits began to roll.

8 months later, Luz is getting a theatrical release. And you’d better believe that I pounced on the opportunity to witness this film again and review it in all its 70s and 80s Euro-horror kitsch.

Late one night, A young cab driver named Luz (Velis) drags herself to a rundown police station. However, she is followed there by a demonic entity, determined to finally be close to the woman it loves.

Made as a project for Singer’s diploma at the Academy of Media Arts in Cologne on a budget of just €120,000 (roughly $135,000USD), Luz is certainly the best “student film” you will see in 2019. There’s nothing more rewarding than seeing a filmmaker work so effectively and creatively within their constraints and lack of resources to create something special. In that sense, Luz feels like a student film in the best way possible.

With just six actors, a bottled narrative, only a handful of locations and some terrific implementations of practical effects and sound design, Singer steers hard into the low budget, perfectly capturing the wildly creative essence of the cinema that inspired Luz. The demonic spirit hunting Luz is visualized as nothing more than a light; a simple yet strikingly effective image. The hypnosis sequence is another highlight of Singer’s inventive, yet budget-conscious mindset. Luz re-enacts a day on the job, making the actions to drive her taxi with the sound effects to match, when in reality she is just in a row of chairs at the police station.

Along with tangible graininess of the 16mm film it was photographed with, these simple, yet creative ideas and visual flourishes Singer is able to construct within the budgetary restrictions are what makes Luz such an exciting film.

To call Luz unconventional would be an understatement. Singer stated that he structured the narrative as “a panic attack, of repressed memories and confusion” and he definitely succeeded in gaining his desired outcome.

In the film’s opening stages, we are kept in the dark as to why Luz is at the police station and what the police want from her. It creates an air of mystery to both her character and this unusual situation she has been caught up in. Then we reach the aforementioned hypnosis sequence and this is where the film’s wonderfully strange narrative unfolds in such a satisfying and inventive fashion.

As previously mentioned, Luz is hypnotized to re-enact a specific day where she encountered a woman from her past as a passenger in her taxi. Singer directs these sequences which such precision and a dream-like haze. The diegetic flashbacks intercut within the scene, the psychotherapist who hypnotized Luz constantly appearing in her memory and the additional layer of sound all factors in crafting a tense and eerie atmosphere that makes the audience question; Did this really happen? Is this really her memory? Or is this memory being planting in her head? WHAT IS REAL????

These questions you start to ask yourself make you gravitate towards the mystery. The audience, much like the titular character, is cast under a spell and is captivated by the incredibly bizarre events unfolding onscreen.

Brevity is bliss, in terms of this review and the film itself. Though just scraping into feature length at a lean 70 minutes, Luz sure as hell leaves a lasting impression. Tilman Singer’s directorial debut is a hidden gem of demonic suspense and intoxicating mystification that is more than just a paranormal pastiche. It’s a hypnotic and entrancing trip into euro-horror, Giallo weirdness that’s oozing with its own fresh and unique personality while being a loving homage to filmmakers such as Dario Argento, David Cronenberg, and Lucio Fulci.

Luz genuinely feels like a film from a bygone era. It is the sort of film you’d expect to find as a dusty VHS at a swap meet, a cheap film print in an archive somewhere or screening as a midnight movie at a repertory cinema. It’s amazing to see these types of films still being made in 2019, and this resurgence of Giallo-inspired cinema (including Piercing, the Suspiria remake and the films of Peter Strickland) is very exciting. Especially if they are as strange, as engrossing and as entertaining as this.

Thank you for reading! What are your thoughts on Luz? Comment down below!

[…] says it all! Its ending is as obvious as they come, but Eyes of Laura Mars has plenty of style as a Giallo-inspired horror-thriller set in the fashion world of 1970s New York. It’s also the movie Irvin Kershner directed right […]