David and Goliath and ‘JFK’

'JFK,' as flawed as it is, establishes an inspiring precedent. 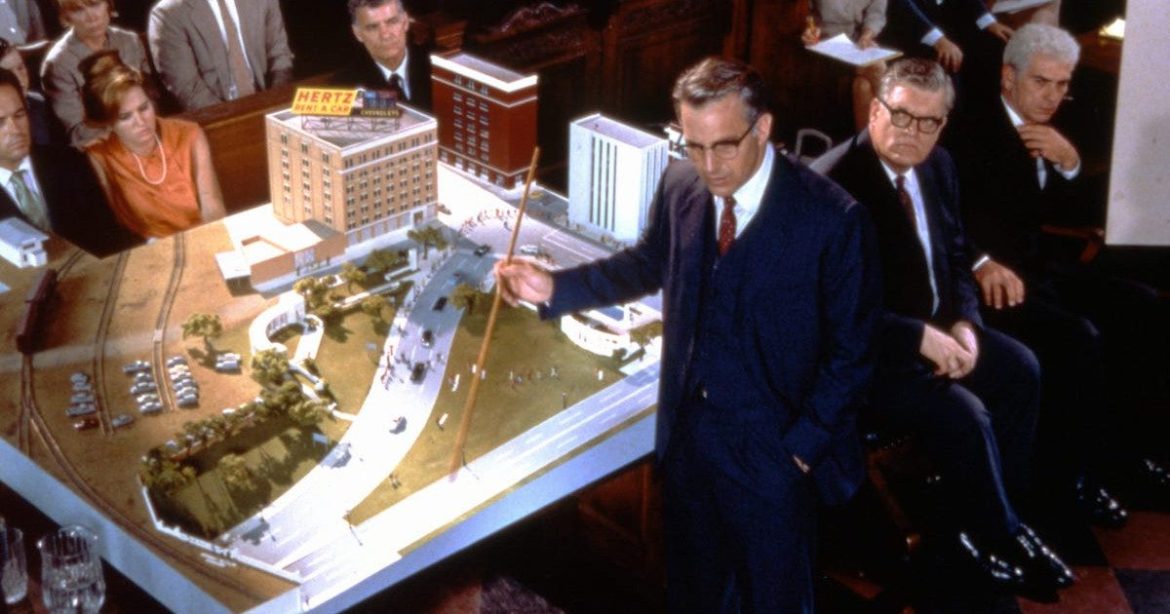 JFK has its share of flaws. Director Oliver Stone, a Vietnam veteran, displays his strong disdain for the government throughout the film. Blinded by this, some of the information included in the film is incorrect and some parts of the story are omitted entirely. The phrase “loosely based on a true story” definitely applies here.

That doesn’t discount the fact that JFK does something that filmmakers should do more often: criticize widespread institutional corruption; in this case, the U.S. government. Even if it didn’t hit a home run, it swung hard and got the ball moving. That’s more than I can say about most films.

JFK is in some ways the predecessor to films like Spotlight and Erin Brockovich — both based on real stories of whistleblowers, like Jim Garrison (Kevin Costner) was in JFK. Oliver Stone is the David to the government’s Goliath, a story repeated in some of the following films.

Tom McCarthy’s 2015 Spotlight is a stunning example of a David and Goliath story. The plot follows a group of journalists exposing a cover-up of a sexual abuse scandal involving a defrocked priest. In doing so, they uncover a bigger cover-up affecting the whole Catholic Church.

The Catholic Church, like the U.S. government, is a large and influential organization. One does not simply challenge them unscathed. Regardless of the good the religion has done for many, it has also severely affected the lives of many, something McCarthy highlights in the film.

Like JFK, it’s an uphill journey the whole way trying to expose the scandal. Lies, greed, corruption, and evil poisoned both affairs, making it hard to know who to trust. The Catholic Church fought hard to bury the information that these journalists uncovered, the same way the U.S. government fought to bury Jim Garrison’s investigation in JFK. Yet, Garrison and these journalists soldiered on in their mission. They fought back against these gargantuan institutions because they were passionate about the affair and knew it was the right thing to do.

Erin Brockovich is the story of one woman against one large utility company, Pacific Gas and Electric (PG&E). Played by Julia Roberts, Brockovich uncovers a scandal involving contaminated water causing illness in a community. PG&E knew about this issue and covered it up instead of addressing the problem. Brockovich’s fight is to force the utility company to compensate the victims of its negligent actions.

Anyone who has ever dealt with a utility company in any capacity knows what a pain it can be to get them to budge an inch on anything. As someone who calls utility companies for a living, I can tell you that Erin Brockovich is a hero of mine. To stand up to PG&E despite threats of legal action or just general unwillingness to cooperate is a feat of heroism to be admired.

Everyone wants to stand up to those institutions that lord their power over individuals, but many people don’t dare to do so. When someone does step up, however, they become a hero. Jim Garrison had the courage to stand up to the U.S. government in JFK, becoming the role model for people who craved justice for their fallen president. Erin Brockovich had the gumption to stand up to PG&E in Erin Brockovich, becoming the savior for all the people who had fallen ill because of the utility company’s actions. These are stories of heroism.

One of the more famous whistleblowers of modern times is Edward Snowden. Still a controversial figure, Snowden uncovered the U.S. government’s use of surveillance on its own citizens. The 2016 film Snowden (also directed by Oliver Stone) is about those efforts to uncover the wide-reaching program that still affects American life today.

Like Jim Garrison, Snowden had no reason to stand up to the government initially. He was an employee of the government — the CIA no less. Yet, who better to expose the corruption of an organization than someone who works in that very organization? Despite the threat he faced to his employment, his way of living, and possibly his life, Snowden persevered to let the world know about the National Security Agency’s spying on its citizens. He still bears the consequences of this today.

Similar to JFK, Snowden in part details the public reaction to the titular character after he unveiled his evidence. Some were incredulous that the government could ever do something so reprehensible, refusing to believe it. Others labeled Snowden an unpatriotic troublemaker, only trying to stir up trouble and destroy the good name of the United States of America. Jim Garrison and Edward Snowden faced similar reception from the public, but continued to pursue their mission.

All the President’s Men

All the President’s Men focuses on the story of Carl Bernstein (Dustin Hoffman) and Bob Woodward (Robert Redford). These two Washington Post reporters were instrumental in uncovering the scandal that ousted Richard Nixon from office. Despite doubts and fears from their colleagues of public reception and government retaliation, they pressed on to expose this cover-up to the world.

Once again, much like Jim Garrison in JFK, Bernstein and Woodward worked to uncover corruption in the U.S. government. Any time one goes up against the U.S. government, a great amount of risk follows. In scandals as far-reaching and damning as Watergate, that risk is incalculably large. Loss of employment, friends, family, professional reputation, and security in life are just some of the things Bernstein and Woodward risked to expose this scandal.

Like Jim Garrison, Bernstein and Woodward risked everything for their work. But they did it because they knew it was what they needed to do. They were severely outmatched, but they fought anyway. And, by some miracle, things turned out okay.

The Fall of Goliath

JFK is an exaggerated story of the assassination of President John F. Kennedy. There are aspects of it that have merit and should be studied closer by scholars. There are parts one can safely ignore in the name of historical accuracy, such as the entire character of Willie O’Keefe (sorry, Kevin Bacon). Yet, the overall inspirational message cannot be overlooked — stand up to Goliath. This is how big institutions are kept in check — by normal people stepping up and refusing to back down.

Thank you for reading! What are your thoughts on JFK? Comment down below!

‘Money Machine’: Disturbing and Sensational (Not in the...