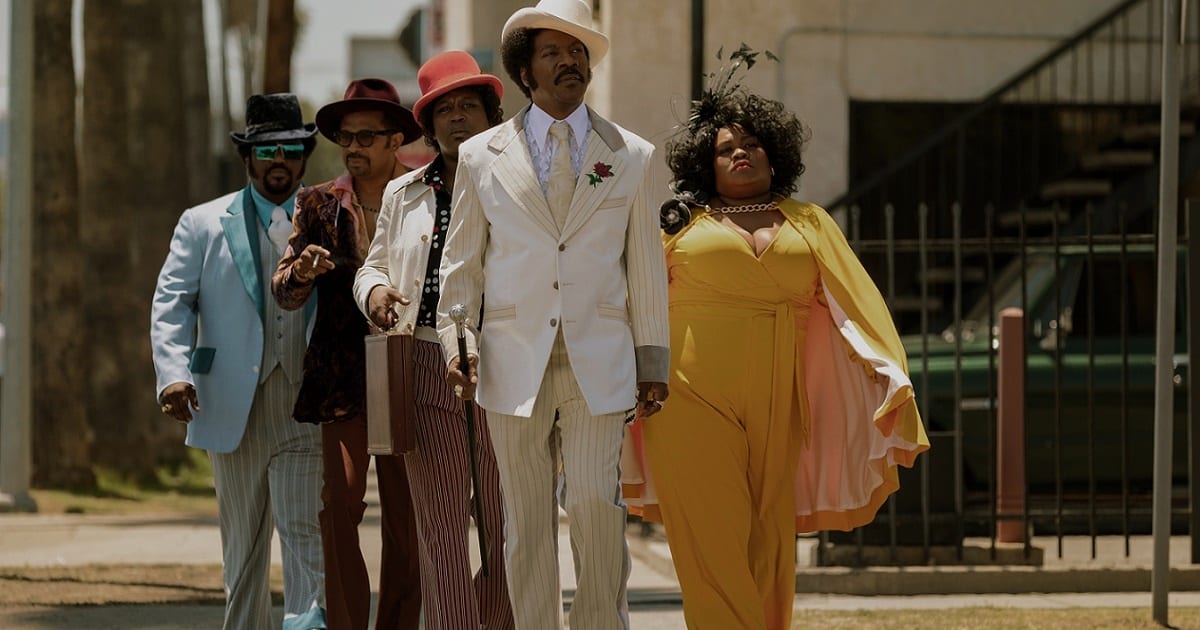 Eddie Murphy is a comedy legend whose greatness is often spoken about in the past tense. A comedic descendant from the likes of Richard Pryor and Redd Foxx, he kickstarted his cinematic career with the legendary Walter Hill buddy-cop movie, 48 Hours. He followed this up with another classic, Trading Places, and after his extended cameo in the lackluster Best Defense, he starred in the smash-hit Beverly Hills Cop, which would have two successful sequels. (Suffice it to say, none of them could match the charm of the original.)

Meanwhile, he would make several Saturday Night Live appearances and helm two incredible comedy specials (Delirious and Raw). His last great film of the eighties was probably Coming to America, though I have a soft spot for Harlem Nights.

The nineties showed a definitive dip in quality. His films weren’t exceptionally terrible per se: Another 48 Hours was a fun, if derivative sequel; Boomerang received some cult acclaim and is noteworthy for being a big-budgeted film (at the time anyway) with a prominent African-American cast and crew; The Distinguished Gentlemen has some satirical merit and Beverly Hills Cop 3 had its moments (largely due to Hector Elizondo’s presence).

Soon came Murphy’s foray in more PG-13 fare, especially after the success of The Nutty Professor. It seemed that Murphy wanted to move on from his R-rated days, with the underrated Life, being his last R-rated venture for a long time.

Then came The Adventures of Pluto Nash, one of Hollywood’s most notorious flops. The film was made with a budget of $100 million and finished with a loss of about $95 million. Ouch. So despite some success with his voice-over work in the Shrek films, the specter of Pluto Nash kept following him.

Truth be told, some of the movies he did afterward are worse: Norbit, Meet Dave, Imagine That and the saccharine puke-fest known as Mr. Church. Even after receiving some critical acclaim for his dramatic turn in Dreamgirls, it seemed that Murphy’s glory days were long gone. It seemed unlikely that many of us would ever get excited about an Eddie Murphy vehicle again.

Then came the trailer of Dolemite Is My Name. Suddenly, we saw a glimpse of the fast-talking, foul-mouthed Eddie Murphy we know and love. Finally, he was back embracing his R-rated roots, starring in a biopic about blaxploitation legend Rudy Ray Moore. It would feature an all-star supporting cast, including a whacked-out Wesley Snipes. The script was written by Larry Karaszewski and Scott Alexander, the duo who’ve penned some of the greatest cinematic biopics, such as Ed Wood and The People vs. Larry Flynt. The director would be Craig Brewer, whose work can reach greatness, as he had proved with Hustle and Flow and, especially, Black Snake Moan.

I’m happy to report that despite its flaws, Dolemite is My Name is a hilarious ode to the great Rudy Ray Moore, which in turn fully capitalizes on the comedic talents and charm of Eddie Murphy from his heyday.

Rudy Ray Moore (Eddie Murphy) is a dreamer, a man who knows he’s destined for greatness but has yet to figure out how. Having escaped the clutches of an abusive father in Arkansas, who told him throughout his youth that he was worthless, he yearns to prove his father wrong. Occasionally this leads to moments of despondency, as he grows increasingly older and prospects seem to continually wither away.

When a drunken bum barges into the record store he works in, telling foul-mouthed limericks starring a badass named Dolemite, Moore is inspired to use this persona and make it into a comedy routine. This routine quickly gains popularity in the neighborhood. He even manages to make a few successful comedy records which he has to sell under the counter due to its obscene content.

After watching the Billy Wilder classic The Front Page, in which neither Moore or his friends find anything to laugh about, Moore is inspired to write his own movie, starring his own comic persona Dolemite. Dolemite Is My Name follows his struggles to receive funding for this project, filming the movie itself, and the movie’s eventual release which would make him a blaxploitation legend.

Ladies and Gentlemen, Eddie Murphy Is Back!

Dolemite Is My Name aims more to honor Rudy Ray Moore’s legacy, rather than replicate his comic persona. This is not to say Murphy’s performance is completely devoid of Rudy Ray Moore’s mannerisms. Whenever he’s playing the Dolemite character, he reminds us what made the obscene character so memorable. Murphy does the great man justice but he’s doing it in his own, idiosyncratic manner.

Even though the subject will entice certain cinemagoers like myself, it’s likely not interesting for most mainstream viewers who either never heard of Moore or won’t be able to appreciate his pulp sensibilities. It’s easier to mass market a big (and compromised) biopic of Freddy Mercury. Not so much for the likes of Rudy Ray Moore, whose legacy has inspired countless black comedians and rappers for decades to come.

Thankfully, Murphy chose to do a project with some risk, a role that gives him free rein to swear as much as Moore did. This is not to imply that Murphy’s comedic persona revolves around swearing — a point he hilariously made in Raw — but he works without PC restrictions. It seemed that for a long time, perhaps due to the success of The Nutty Professor, that Murphy aimed for family-friendly material, avoiding as much controversy as possible. It is only fitting that he returns to the R-rated comedy that made him famous by starring in a Rudy Ray Moore biopic.

Dolemite Is My Name lives and breathes on the charms of Murphy, but he’s also supported by an impressive cast of black comedians. From the underrated Mike Epps, Craig Robinson, Keegan-Michael Key, and Titus Burgess. Wesley Snipes nearly steals the show as the pretentious director D’Urville Martin, whose only claim to fame is having a bit part in Rosemary’s Baby. The film also boasts cameos from the likes of Snoop Dogg, Chris Rock, Barry Shabaka Henley, and Bob Odenkirk.

But besides Murphy, it’s Da’Vine Joy Randolph who impresses the most. Randolph plays Lady Reed (aka Queen B), a woman from the streets with whom Moore finds kinship with. He senses theatrical talent inside her and gives her a platform, both on stage and on the screen. The few heartfelt moments in the film revolve around their banter and their friendship and is truly the heart of the film.

A Little Too Conventional

If I can fault Dolemite Is My Name for anything, it’s that it’s sometimes a little too conventional. The screenplay fills in all the hallmarks of your standard biopic — just with more hilarity than usual. I can’t really fault the screenplay for this, yet I wished it had focused on the rawer aspects of Moore’s background. The abuse he suffered, the prejudice he endured. There was never a sense of peril. When Moore finds some success, everything starts to go rather smoothly.

Even if you have never heard of Dolemite, you know what to expect. You can sense the third act coming. You know it will all culminate into the inevitable inspiring climax. This is not necessarily a bad thing, as the film keeps you engaged with its humor, but a little more risk with its narrative would have been welcomed.

A greater issue might be its lack of seventies aesthetics. With this, I don’t mean how people are dressed or even the music that’s used. (Though movies should really stop using Marvin Gay’s “Let’s Get it On,” with which this film begins, it’s horribly overused.) Rather, it’s the lack of grit. The film has an overall clean feel to it. A grainier aesthetic, maybe some seventies-esque cinematography, would have made this film more special.

I’ve enjoyed this movie from beginning to end. I would say it’s definitely recommended for three kinds of people. First, for those people who love Blaxploitation films. It has inspired me to check out some of Rudy’s classics, such as his Dolemite films and Petey Wheatstraw.

I would also recommend it for inspiring filmmakers or for anyone with a seemingly impossible dream. The message of Dolemite Is My Name is clear: no matter what people say, chase your dream. It might be foolish, but you’ll be proud of yourself in the end.

And finally, this is a must-see for Eddie Murphy fans, especially for those who yearned to see him doing something more risqué and adult, something that reminded you of why you loved his work in the first place. Dolemite Is My Name can stand proudly among his classics. (Unfortunately, Murphy’s next film will be a sequel to Coming to America which will, unfortunately, be PG-13. It can still be good, I guess, but I doubt it. Some people will never learn.)

My suggestion? Relish the success of this film. As it might just be a while before Eddie Murphy does something good again…

Thanks for reading, and listening! What are your thoughts on Dolemite Is My Name? Comment down below!

[…] especially egregious that Coming 2 America follows up Eddie Murphy’s return to R-rated comedy, Dolemite Is My Name, a film that is rightfully hailed as Murphy’s comeback. All of us Murphy fans mourn the days […]

[…] The FBI officially closed the case unsolved in 2016. So, we’re never really going to know the truth. As well as giving a good oversight of the confirmed evidence and official testimonies, Dower fleshes out the film so it’s about more than just the whodunnit and investigates the wider ways in which it’s entwined in the lives of those involved and those who have involved themselves in this very American legend. […]

Thanks for writing this review. I’m going to watch it as soon as I get home from work…