This is one of the most overlooked inspirational films. 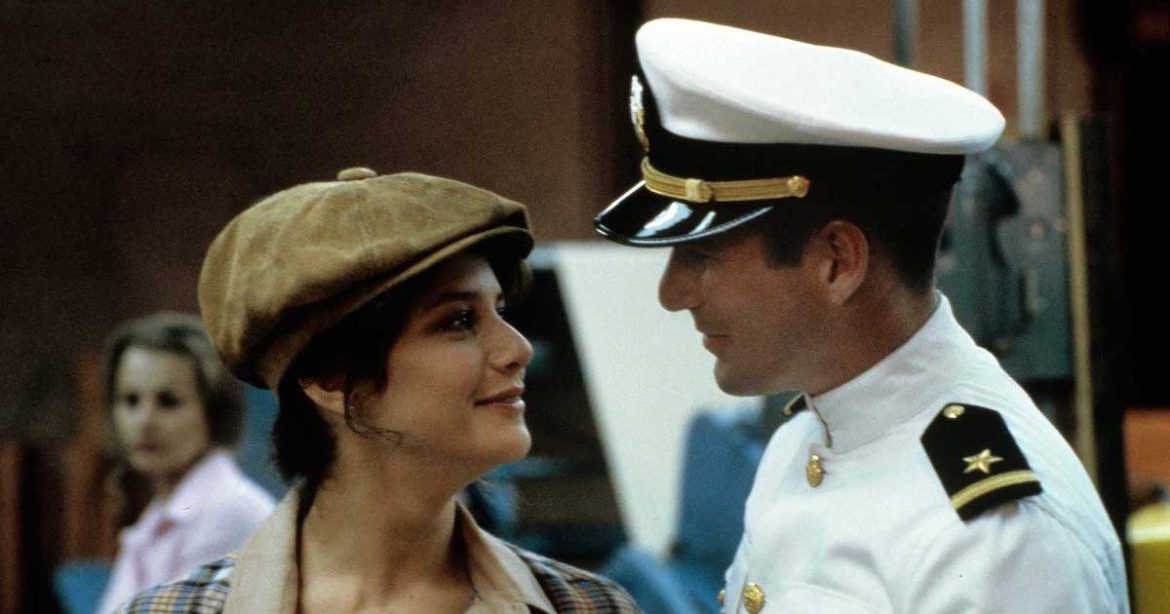 I’m going to get real personal, real quick: I’ve been having a rough time lately. I wasn’t super amped to watch An Officer and a Gentleman, but I’m glad I did. It was one of the most inspiring films I had seen in a while.

Despite the film being 40 years old, I felt like it had lessons in it that would be relevant to the modern viewer, mainly me. Here are the biggest inspirational takeaways I had from An Officer and a Gentleman.

Fight for What You Want

Zachary Mayo (Richard Gere) doesn’t have much of a home life. His dad is a disgusting man who indulges regularly in women and booze. Mayo grew up in that environment without any sort of paternal role model, leading him to join the Navy for a better life.

He still retains some of the unsavory aspects of his old life, as he runs a small black market during boot camp for shined belt buckles and shoes. When he’s found out, Gunnery Sgt. Foley (Louis Gossett Jr.) runs him through the military ringer. Foley forces Mayo through continuous exercise and insults to break down his body and spirit. At one point, he threatens to send Mayo home.

It’s at this moment that Mayo realizes how much he wants this. He wants to be an officer and fly jets for the Navy and not have to go back to his so-called “life.” He screams at Foley, “I got nowhere else to go!” It’s one of the most iconic lines of An Officer and a Gentleman. You can practically feel Mayo’s desperation through the screen. It was a beautiful moment that made me want to find that one thing in my life that I would fight for as much as Mayo fights to stay in the Navy.

Be Honest with Yourself and Others

During an inspection, Mayo is busted for his black market dealings. Gunnery Sgt. Foley reams him for this and Mayo learns his lesson to do things the right way. He even shines the belt buckles for a buddy who previously had denigrated him for dealing dishonestly.

Mayo applies this lesson to the rest of his life following the confrontation with Sgt. Foley. He is honest about how much he loves Paula Pokrifki (Debra Winger) and returns to her side even after attaining his officer rank, something many officers do not do. He is honest with his unit, as he sacrifices an obstacle course record to help a fellow officer candidate overcome an obstacle. Instead of going for the record and leaving his teammate in the dust, Mayo decides to evaluate if the victory would be an honest one and goes against helping himself.

After his come-to-Jesus moment with Sgt. Foley, Mayo realizes the value of his word. When he says he is going to do something, he learns that he needs to do it. He keeps his promises to help his fellow candidates and friends and he does things the right way. No longer does he leave people behind if it conveniences him; he is there for others.

Be the Best Friend You Can Be

Mayo quickly makes friends with Sid Worley (David Keith) when he starts training. Worley is a country boy who joined because everyone else in his family was in the military. He and Mayo become inseparable as the weeks go on, even going on double dates with Paula and Lynette Pomeroy (Lisa Blount), the two local girls they fall for.

Nearing the end of their training, Worley and Lynette have a pregnancy scare. Worley is fully prepared to marry Lynette for this baby. When it turns out that there is no baby, Worley doesn’t back down and professes his love for Lynette and desire to still marry her. Lynette coldly turns him down, saying she only wants to marry an officer, something Worley is no longer able to give as he drops out of officer candidate training.

During this rough patch, Mayo is there for Worley every step of the way. He encourages him and helps him out when training starts going poorly. Mayo several times goes toe to toe with Gunnery Sgt. Foley on Worley’s behalf. When Worley commits suicide, Mayo is devastated and realizes that he truly loved Worley. It’s a turning point in his life where he discovers it is okay to love people, even if it means feeling pain when they are lost.

You Are Not Your Circumstances

Mayo grew up in awful conditions and had terrible role models. This is shown in his lackluster attitude during the beginning of An Officer and a Gentleman. Throughout the film, he learns what it means to be an upstanding member of society and to help others. He overcomes his past and upbringing to be better than those in his life taught him to be.

While we may not have circumstances like Mayo, we all have our past and current struggles. But we can look to Mayo as an example of not letting those struggles define us. What defines a person is how they react to the struggle and how they ultimately let it affect their life.

When he entered officer candidate training, Mayo just wanted to get away from his current life. After training for weeks, he realizes what it means to be an officer and a man. No longer was he trying to get away from something, but he was working toward something. It was about the journey then, and no longer the destination. That’s when Mayo became the person he needed to be.

Thank you for reading! What are your thoughts on An Officer and a Gentleman? Comment down below!