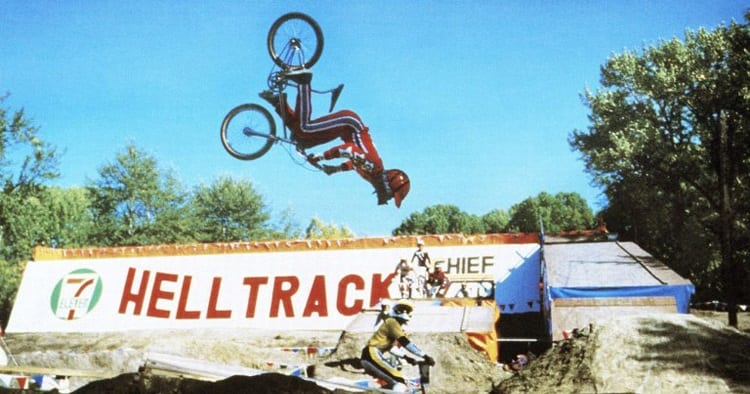 Okay, wow. What did I just watch? This movie was…something. Rad, directed by Hal Needham, is a movie about an amateur BMX rider, Cru Jones (Bill Allen), who tries to enter a promoter’s race for a big cash prize and national exposure. It sounds simple, right? It’s not! This movie was a whirlwind of sensory overload. I heard so much, I saw so much, I could really feel so many things through this movie, not all good. But, not all bad. I think I’m getting ahead of myself. What I am basically going to do is go through the entirety of this movie, and as I go through, comment on the things that are kind of insane about it. There are some spoilers ahead!

Please Watch Rad Before You Read This

Here is the plot, in full, of this motion picture. I am going to leave out some of the more niche or irrelevant things in the film, and I do recommend watching it before you read this. Otherwise, you might not believe me.

Rad starts with a montage of bike tricks, mostly bike hopping, that plays behind the opening credits, to the song “Break the Ice” by John Farnham. This felt like an odd choice off the bat since there’s no ice in the movie. Maybe I’m reading too much into it, but surely there are better songs to encapsulate the themes of Rad. Regardless, none of the people in this montage are in the movie. It lasts 4 and a half minutes.

Okay. Cru Jones, which, by the way, is a crazy name, is a skilled BMX rider. He has two kooky friends and they have paper routes and a secret hideout where they bike in lumberyards. While they do this, the friendly cop comes and races them, I think. Or tries to catch them. It’s unclear, but the cop is important. His name is Sergeant Smith, because he’s memorable. Of course, they’re in the small town of Cochrane, where nothing much happens. That is, until Helltrack comes to town! That’s right, the most ambitious BMX course of all-time, Helltrack, is coming to Cochrane, and it’s going to get this city on the map! Cru wants to…audition? Try-out? I’m not sure, but he wants to try to qualify for the race, but his mom says no because he has his SATs that day, ugh! High school, right? When he asks his mom if he can race instead of taking his SATs, he puts his little sister Wesley, who is played with brilliance by Laura Jacoby, into a trash can to shut her up. And their mom does nothing! Can you imagine putting your little sibling into a trash can and your parents just being cool with it? Mine would not be.

Anyway, it turns out that this Helltrack is all just to make a quick buck for the promoter, Duke Best. Not only is he the creator of Helltrack, he is the president of the Federation of American Bicyclists, and the owner of Mongoose bicycles. This feels like a lot of conflicting interests to me, right? Like, how can he fairly preside over FAB (their phrase, not mine) while owning a company that has a team that participates in FAB? Fishy! He is, of course, the villain. Now, I wonder why Mongoose, which is a huge brand to this day, allowed themselves to be the villains in this story. I mean, why? Their name is all over the film, and the bad guys are all on their team! Seems like a risky business move to me, but I was a film major so what do I know?

“Anna, what do you mean ‘their team’?” Uh, wow, are you not familiar with the exhilarating world of 1980s BMX? Dork. NOT rad. In essence, the opening of Helltrack is so they can have a big race for $100,000 and a new Corvette. Rad. It’s a ranked event, so the top BMX riders in the country have all come to compete. These riders are sponsored by Mongoose, GT, Coke, and Vans, to name a few. Fun fact, one of the producers of Rad and Vans were in a lawsuit! Just a little tidbit for my BMX-heads out there.

Anyway, all these riders come into town in a parade, and Cru ends up meeting Christian, played by the now-disgraced Lori Loughlin. Christian is a BMX rider, who I suppose can’t race in this for…some reason? It’s not super clear, but either way, Cru and Christian (aw) hit it off later on, at the town dance. Again, it’s unclear why this dance is happening and why it involves the entire town. Like, adults are there, and spiking the punch. Now, this is the best part of the movie, in my opinion. Cru is outside of the dance hall fooling around on his bike, so Christian gets her bike, and invites him to bike dance to the song “Send Me An Angel” by Real Life, which actually kind of rocks. Regardless, the bike-dancing is…crazy. The two of them glide around on their bikes, standing up and laying down on them, doing sort of figure skating moves on them. The electricity between them is palpable. Just two misunderstood BMXers. A tale as old as time. This scene goes on forever. So long. But, clearly, they are entranced by one another’s angelic bike-dancing, and they proceed to kiss the next day after sliding down a sewage drain into a lake. Fully-clothed. Romance peaked in 1986.

So, the two fall in love, and then Cru skips his SATs to race. This is reckless, but he can just reschedule, it’s not a big deal. They make it out to be a bigger deal. I sent the ACTs to my college. He could have done that. Regardless, Cru races in the qualifiers, but for some reason, he has to do it maybe 5 or 6 times. It’s so long! After the longest and most redundant race scene I’ve ever seen (it was 8 minutes of the film), Cru qualifies! Yes! However, Duke Best is worried he will beat Bart Taylor, the Mongoose golden boy. If Cru beats Bart, Duke Best loses a lot of money. So, he keeps coming up with different rules to exclude Cru from the competition. First, Cru needs a sponsor. When his sister starts selling shirts for Rad Racing, they figure out how to get him a sponsor! Then, Duke Best says Rad Racing needs at least $50,000 in sales to be a legitimate sponsor. Sad. So, the town comes together and raises the money after Sergeant Smith gives a confusing speech on how inspiring Cru’s biking is to the town! Yes! But Duke Best will have his way, and his dirty money. So, he recruits Rex and Rod Reynolds, his 2nd and 3rd best riders behind Bart, to knock Cru out of the race. Another fun fact, the twins who play Rex and Rod, Chad and Carey Hayes, wrote The Conjuring. I am serious.

At the beginning of this race, the entire lineup is given a full introduction. In the film! Full names, teams, hometowns, and awkward waves included. This takes up multiple minutes. Multiple minutes, people! It’s incredible how long this sequence is. It’s, in fact, admirable. I mean, they may as well say these riders’ social security numbers and home addresses with how much time they take. Also, if the teams are as easy to make as Rad Racing was, why does anyone actually need a team? I get it, it’s cool to have Coke sponsor you, but what is stopping any amateur BMX kid from raising some money to make his own racing team? Seems flawed!

Finally, they get to the Helltrack race, which, like its predecessor, has little to no suspense since it’s just so…long. The course itself does not live up to its name. I mean, I would never claim to be able to ride a BMX track with any speed or finesse, but if I’m going to watch a movie about it, make them do backflips or something, I don’t know. Especially since in the entire first part of the movie, Cru is trying to master a backflip, and he never uses it in competition. He should have!

There are a lot of redundant scenes where the riders jump up on stuff and bike around the track, so it loses any appeal pretty quickly. The Reynolds twins try knocking Cru out, kind of, but he gets right back up and keeps going, so that quest is forgotten. Then, when Cru is far behind, Bart Taylor takes the Reynolds twins out by knocking into them, and stops so that Cru can catch up and they can have a one-on-one race. What? Why on earth would anyone do that? This is $100,000 we’re talking about! And a new Corvette! Crazy. Truly.

Ultimately, Cru beats Bart Taylor. Duke Best loses a bunch of Mongoose deals in retail stores, and kicks Bart off the team. Cru offers Bart a spot on Rad Racing, which is not a real racing team, but fine. Then, that’s the movie. It ends, and we get more bike hopping and tubular ‘80s music.

Do I recommend this movie? Honestly, yes. It’s become a cult classic and is very beloved by its fans, and even though I pointed out a lot of odd and inconsistent things, that doesn’t mean I didn’t enjoy it. I always like a movie where the underdog comes out on top, and Rad follows that story structure. Ultimately, you root for the good guys, and there are various arcs that satisfied me in the way movies like this do. It’s goofy, and it’s fun to watch with another person to comment on some of the crazy things. In these trying times, it’s really fun to watch something so insane that you have to suspend your disbelief and enter into a new world. That’s what movies are all aiming for, on some level, so in that way, this is a success.

Some things I missed:

Thank you for reading! What are your thoughts on Rad? Comment below!