‘Babyteeth’: A Vibrant, Yet Bittersweet and Transgressive Take on the Teen Cancer Dramedy 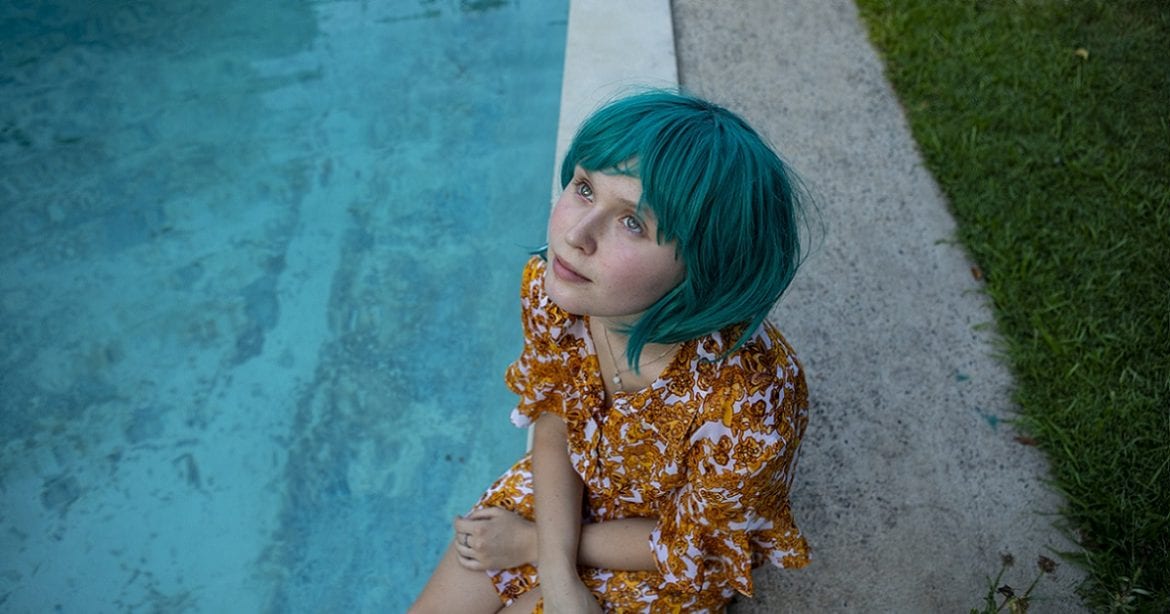 As MovieBabble’s unofficial and self-appointed Australian correspondent, it is my obligation to pounce on any Australian film that falls into the lap of the MovieBabble staff to review. My ears especially prick up when I hear that an Australian film  has garnered universal critical acclaim and has won multiple awards at festivals across the globe. My anticipation builds even further when a director has achieved these incredible accolades with their debut feature film. So you could imagine when the opportunity to cover Shannon Murphy’s Venice award-winning feature debut Babyteeth came around, I immediately grabbed onto the chance to review this deviously quaint and irreverent Aussie coming-of-age dramedy adapted from screenwriter Rita Kalnejais’ play of the same name.

Your first love can appear before you in the most unlikely and bizarre of circumstances. For terminally ill 16-year-old, Milla Finlay (Eliza Scanlen), it happened on platform 4 of a suburban Sydney train station. On her way home from school, she is almost knocked over by Moses (Toby Wallace), a small-time drug dealer perennially dressed in stubby shorts and a Hawaiian shirt, sporting some bad prison-style tattoos and a glorious rat tail. Despite their awkward and slightly uncomfortable meet-cute (involving Moses asking for money), Milla becomes completely infatuated with Moses, much to the chagrin and dismay of Milla’s dysfunctional yet protective parents: retired musician Anna (Essie Davis) and psychiatrist Henry (Ben Mendelsohn). Through her relationship with Moses, Milla gains a new lease on life and inspires those around her to live as if they have nothing to lose.

Kalnejais describes her play as ‘a family drama that is funny until it is really not funny’, which speaks to how delicate the balance of tone is required for a film adaptation to work. Thankfully, with Kalnejais adapting her own script and the assured and precise direction from Shannon Murphy, the atmosphere and tone and how they are shifted could not be more perfect. Expertly juggling conflicting feelings of humor and pain in every scene; the exhilarating euphoria of young love colliding with brutal, uncompromising reality, Murphy does not harp on the painful extremities of Milla’s illness, but at the same time never loses sight of the sheer seriousness of her situation.

Milla’s illness is never specified, she is never shown in chemotherapy or in any sort of treatment and the film does not pity her or exacerbate the deeply tragic sadness of her affliction to soap-opera levels of melodrama. Much like as Davis and Mendelsohn’s characters learn to do over the course of the film, Milla is given space to be herself and feel alive in a time when she is bravely facing her own mortality.

Kalnejais’ whip-smart screenplay effortlessly finds humor and levity in its dark and morbid subject matter. The comedy is subtle and naturalistic in its delivery, whether it be from the awkward and absurd events that unfold or from its eclectic supporting cast like the Finlay’s new neighbor Toby (Emily Barclay), a pregnant woman with a cigarette in one hand and a Frosty Fruit in the other (perhaps the most unequivocally Australian image ever presented on film). Even the bold pastel text that introduces scenes (I heartily chuckled when ‘A Little Bit High” and ‘F*ck This‘ appeared on screen), the use of music and the occasional fourth-wall breaks of Milla looking directly into the camera never felt an inch out of place, but rather allows audiences to experience Milla’s story vicariously through her, moving at her pace. For Milla, every new experience with Moses immediately has a visceral, rush-of-blood-to-the-head sense of excitement and wonder. 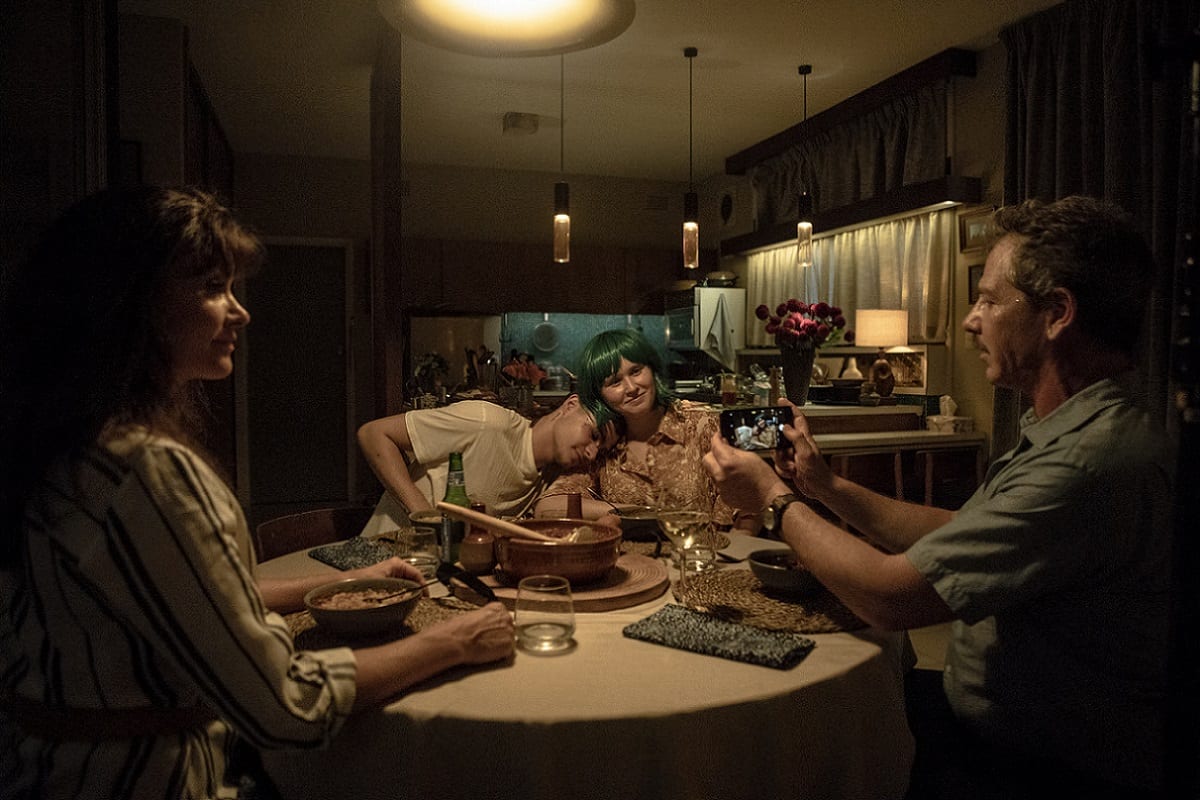 If you have not yet bought stock in 21-year-old Aussie actress, Eliza Scanlen after her roles in Sharp Objects and Little Women, you will be breaking the bank to invest after her sensational performance in Babyteeth. Milla has accepted and made peace with her illness, knowing that she is not long for this world, but is on the cusp of feeling more alive than she ever has. Scanlen brilliantly conveys the rawness, quiet strength, and free-spiritedness of this character yearning to get as much out of life while she still can.

Matching Scanlen’s breakout performance is the equally incredible Toby Wallace in a role that saw him take out the Marcello Mastroianni Award for Best Young Actor at Venice. He brings a spontaneous and wiry charisma to Moses, never fully knowing if he is just taking advantage of Milla or if he genuinely cares for her. Underneath his bogan street rat appearance and his bad boy demeanor, Moses is more complex and intelligent than what appears on his rough exterior.

These launch-pad performances for Scanlen and Wallace are complemented by always amazing Australian screen veterans, Essie Davis and Ben Mendelsohn. With Mendelsohn being typecast into so many Hollywood villain roles of late (The guy has basically become a late 90s Gary Oldman at this point), it was refreshing to see him in a role where he can show off both his strong dramatic chops along with his often under-utilized sly comic sensibilities.

Conversely, Davis once again plays a beleaguered, deeply depressed maternal figure trying to cope with the inevitable grief that will soon befall her, but she nails it every time and this role is no exception. The powerful dynamic between this principal quartet of characters is what gives Babyteeth the nuance that other films of its kind sorely lack. Though Davis and Mendelsohn seem like stereotypical disapproving parents at the outset, we delve deeper into the complicated unresolved tensions in the Finlay household that are aggravated the moment Milla brings Moses home and how the relationships between these characters unexpectedly evolve throughout the runtime.

Babyteeth is a fitting title for Shannon Murphy’s absorbing and arresting feature debut. Not just in the literal and metaphorical sense of Milla’s journey, but also emblematic of Murphy’s filmmaking talents beginning to take shape before our very eyes. This vibrant, yet bittersweet and transgressive twist on the weepy YA cancer drama is a much-needed breath of fresh air into a genre filled with stale, tearjerking crowdpleasers. Refreshingly honest with a wicked and perverse sense of humor and superb performances across the board, Babyteeth is one of the year’s best and along with Justin Kurzel’s masterful True History of the Kelly Gang (also starring Essie Davis) is proving 2020 to be a fantastic year for Australian cinema.

Babyteeth is in theaters and On Demand this Friday, June 19th. For Australian readers, the film will be released nationally in cinemas on July 23rd.

Thank you for reading! What are your thoughts Babyteeth? Comment down below!

[…] practical way to overcome a problem. Scanlen has been a favorite of mine since her knockout role in Sharp Objects, and she delivers again here. She’s pretty, sure, but her eyes contain her soul, and she is able […]

Loading...
Reply
'i’m thinking of ending things': Kaufman’s Latest Is One of the Most Profoundly Depressing Films Ever Made | MovieBabble September 12, 2020 - 6:32 pm

[…] collecting my thoughts with this one. While it isn’t a film I can recommend due to the emotionally crippling subject matter, it is a film I am immensely glad that I watched. I think it is deeply important that we seek out […]

[…] that is proudly and unapologetically so far from the norm. Whether it’s films with bold and transgressive storytelling, films that are completely visceral and terrifying, or films that cannot be described as anything […]

[…] photographer, painter, composer, and filmmaker, Chhorn is a bold and intriguing new voice in Australia’s artistic landscape. Her latest experimental cinematic effort, The Plastic House is a wholly absorbing […]