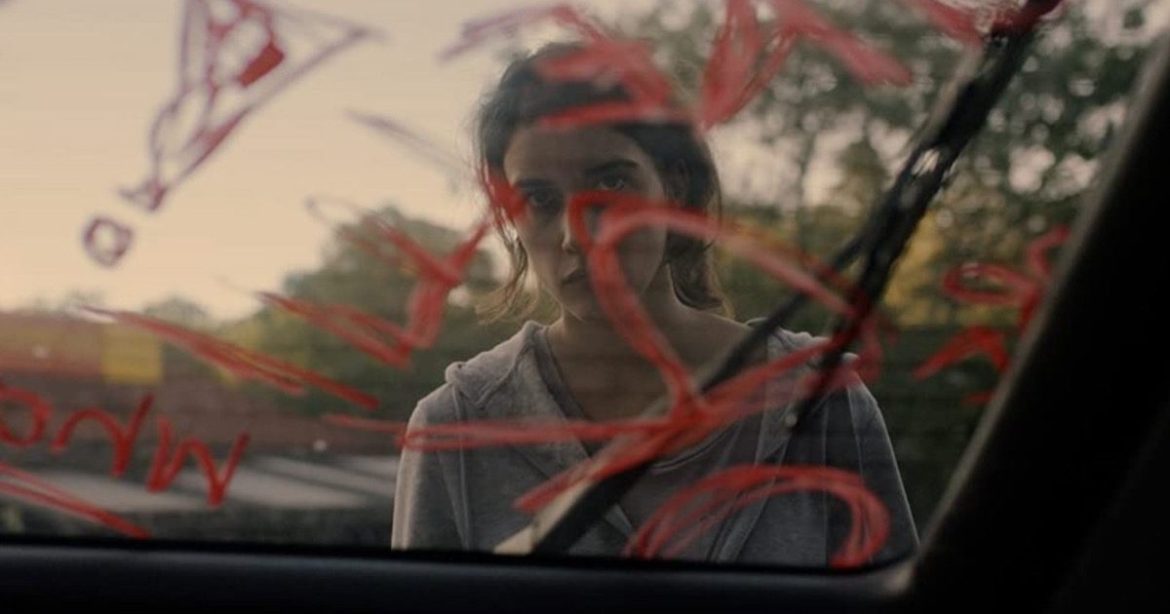 Recently screened online at North Bend Film Fest as part of Nightstream, Abduction is a new Australian science fiction short from director, Paul Komadina. The film follows a young woman that wakes up in a field after a night of drinking; her head filled with weird visions, her body covered in strange markings, and she has no memory of how she got there. In retracing her steps, it leads her down a trail of judgment and cruelty. At just 16 minutes, Abduction is able to pack so much intrigue, tension, and thrilling drama. Lead Actress, Alexandra Nell took out Best Actress at North Bend, while back home it won the Audience Choice Award at Cinefest Oz Film Festival.

A few weeks back, I had a chat with Paul Komadina about his exciting new sci-fi short.

SC: Tell us about your film.

PK: It’s a sci-fi short about a girl who goes out drinking and then basically blanks out, loses time, and the film is about her retracing her steps and slowly the community around her begins to turn on her as she thinks about what she may or may not have done or was accused of doing. The story came from our writer, Frances Elliott from when she had her drink spiked at a club and went through a bit of an ordeal. Not only that, but a lot of people around her were not believing her or subtly blaming her like ‘why would you leave your drink lying around?’, which not only did she have to deal with what she went through, but having her friends not believe her was pretty upsetting.

So she spun that story into this story of a girl potentially, maybe or maybe not, abducted by aliens. There’s a big parallel between the two and I think it was a way for her to deal with it, but also a fascinating way to open up this story and put it in a genre. I fell in love with the idea and she asked me to direct it, and then everything went from there.

SC: I’m kind of lost for words. That is horrifying what happened to Frances.

PK: It really is. I’m probably dropping that quite casually because I’ve told the story a few times, but it was not a pleasant experience at all. The other shocking thing was when she came out and told us when we were in development on this, a number of my female friends that suddenly came out and said ‘Oh yeah, that happened to me as well’. How prevalent it was is what I found really sad and really scary.

SC: That is scary and the fact that the film is set in this country town where the abuse and judgment she gets makes it so much more suffocating. Your film is also very reminiscent of many sexual assault stories where people don’t believe the victims, and putting all of that into a genre context was fascinating to see.

PK: Absolutely, that’s exactly what got me excited about it. I don’t like to be too prescriptive with what films are about and what people should take away from them, but the whole issue of victim blaming is definitely something we are talking to, and we are hoping people come away a little bit more open-minded and a little more open to listening to people.

SC: In tackling this subject matter within a genre context, what challenges came with that?

PK: We wanted to create two realities in this film of essentially ‘did she get her drink spiked, get abused or do things unwittingly?’ or ‘was she abducted by aliens or is her mind just covering for the other?’ We wanted to make a film that was very open and two different realities were possible, so our biggest challenge was kind of juggling that, leaving every single thing open to interpretation.

It’s interesting when you take a story that is based on something quite horrific and then you are making quote/unquote “entertainment” out of it, you want to be really careful about what you’re doing. You know, it’s not salacious or exploitative, but at the same time, it’s something people sit in a cinema and watch, so you got to take them on a journey. Juggling all of that, we wanted to make something that was… hopefully, important and serious, but at the same time was also a journey and hopefully, people did get something out of it.

SC: Staying on genre, Abduction occupies the same space of one of my favorite, very specific niches of genre films that is low-budget, high-concept Australian science fiction, especially from the 2010s with films like Predestination, Upgrade, The Infinite Man and short films like Chris Elena’s Audio Guide. Why do you think this is so prevalent in Australia?

PK: I haven’t given that too much thought, to be honest, that’s a great connection you’re making there. I think partially, it’s because of necessity and resources, you know we don’t have a huge industry in Australia and we don’t have millions of dollars for every project, so we kind of have to make everything a little bit grassroots and if you are dealing with sci-fi then it becomes more low budget, gritty and you have to focus more on the ideas on the effects or big set pieces for example. So maybe some of it is out of necessity, but I know with us it was a way to talk about things coming at them from a sort of sideways angle and I think genre is always good for that.

Recently, just talking American films, obviously something like Get Out or like Dawn of the Dead back in the day talking about consumerism. All the great genre films are never really just about what they are about, there’s always something else under the surface. I think we are doing that here in Australia and you know sometimes genre is a bit of a dirty word and the funding bodies want to make social issue kind of films or sometimes shy away from genre. So you kind of get the mavericks on the side a little bit playing with that who often don’t have a little bit of money, so you have to do the high-concept thing and throw some ideas in there because you don’t quite have the money.

SC: Yeah, people can be dismissive of genre, mostly sci-fi and horror as sort of lowbrow and don’t see it as the vessel for social and political commentary it often is.

PK: Absolutely. And I don’t like to be preached to and films should be entertaining, but at the same time, it’s nice when they are actually about something and that’s the area that I really love. Sometimes it’s intentional and sometimes you are just making a piece of entertainment, but you can’t help but put your point of view of the world somehow.

SC: Looking at your body of work over shorts, commercials, music videos, and a self-funded feature film, Abduction feels a little like an outlier compared to everything else you’ve done. Is genre storytelling and filmmaking something you want to do more of?

PK: Talking about it being an outlier is interesting because it’s kind of where I want to be, you know talking about issues using genre. But along the way you do get distracted (laughs), different projects rear their heads, or sometimes the one you didn’t expect to get funding for is the one you did get funding for, so there are a lot of scripts that I’ve written that are maybe a little bit more along this line that just haven’t gotten made yet for whatever reason. Most of them are features, and the journey to making the money, getting actors attached, and all the things you need to do to make a feature with a decent budget in Australia can take a long, long time.

In the meantime, I’ve tried to keep busy so that means music videos, a web series, shorts, and a lot of commercials is the day job. It’s interesting when you find that you’ve done a whole bunch of things. I also just get excited by an idea and I don’t think that I can do much and think about what track my career should take. Maybe I’ll look back and see the commonality in all my work, at the moment it does feel a little random but I think I’ve become a bit more focused in the last couple of years.

Speaking specifically to Abduction, I feel like it’s the first time I’ve done what I want to do right. The film we’ve made I’m very proud of and I don’t really like anything I’ve done in the past (laugh), I’m one of those people who looks back and kind of hates everything they’ve done. But this is one I’m quite proud of, and if I continue down this line, I’ll be pretty happy.

For more information on Abduction and news about upcoming screenings and festivals, head to abductionshortfilm.com.

For more of my chat with Paul, listen to the full interview over on the latest episode of Another Bloody Movie Podcast in the link below. Make sure you subscribe to the Podcast on Soundcloud, Apple Podcast, Spotify, or wherever you get your podcasts.

Thank you for reading! What are your thoughts on Abduction? Comment down below!