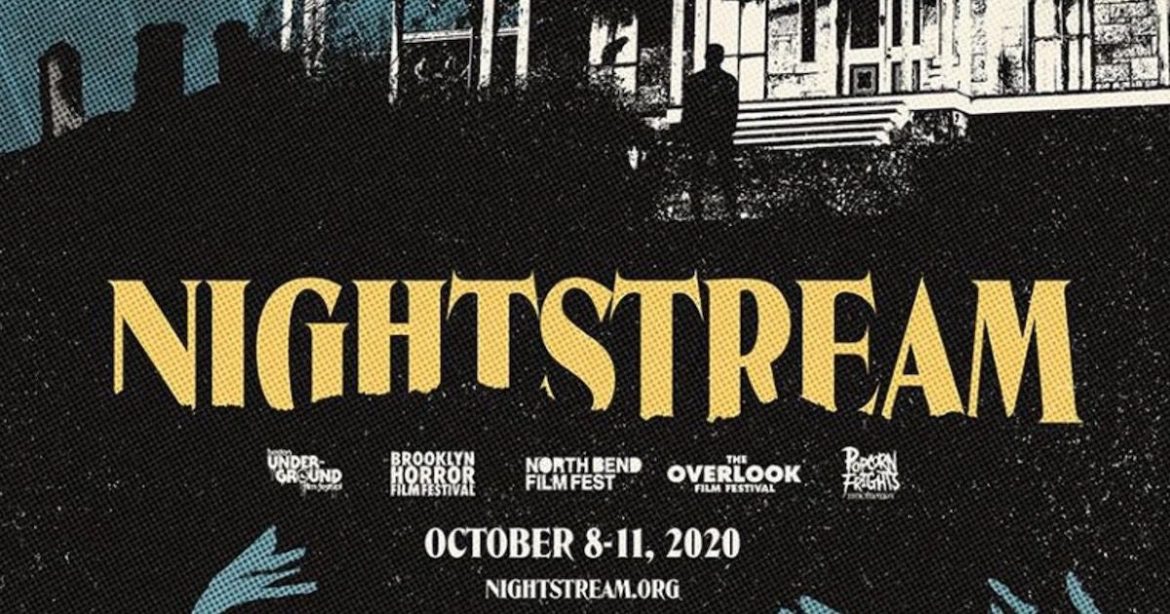 The Global Film community has been hit hard by COVID-19. Productions stalled, cinemas closed, release dates postponed. Even as cinemas are now gradually starting to reopen, several safety and security concerns with physical exhibition still remain, meaning film festivals such as Fantasia or MIFF (which we have previously covered this year in their online incarnations) and many others worldwide were unsafe to go ahead in their original form. In response to these challenging times for festivals and cinema in general, five genre festivals from across the United States have teamed up to create a special online festival just in time for the spooky season. Boston Underground Film Festival, Brooklyn Horror Film Festival, North Bend Film Festival (WA), The Overlook Film Festival (LA), and Popcorn Frights Film Festival (FL) have joined forces to present Nightstream, a dynamic and exciting new genre film festival for U.S. audiences screening online from October 8-11.

This 4-day online festival boasts an impressive lineup. Nightstream presents a wide variety of feature films that range from world premieres to retro classics and restorations and an incredible and extensive program of short films across the five festivals. But it’s not just films, Nightstream has an exciting calendar of special events which include Panels, Live Podcasts, Talks, Trivias and so much more. Highlights include a conversation with Mary Harron for the 20th anniversary of her cult-classic, American Psycho, a virtual fireside chat with the director of the upcoming film Candyman, Nia Dacosta, and real-time commentaries from filmmakers Benson and Moorhead (Synchronic, The Endless) and Issa Lopez (Tigers Are Not Afraid) on their own home movies.

Over the next week, I will be covering this cool new festival for the site. Here are a few highlights of the feature film program that I’m excited to check out:

Sarah Paulson and newcomer Kiera Allen shine in director Aneesh Chaganty (Searching) nail-biting, Hitchcockian new thriller about a wheelchair-bound teenager whose fragile, isolated existence with her doting mother is threatened when she begins to notice strange occurrences around her house.

An emotional deep-water diving trip in Norway for two sisters turns disastrous when a landslide causes one of them to be pinned to the ocean floor in this heart-rending and fear-inducing survival thriller.

In this relentlessly energetic, pitch-black Australian horror-comedy, an ex-bank robber fleeing the country after a video of him goes viral, heads to Helsinki only to find there’s something in store for him there that is much more difficult to escape.

In this ambitious Canadian sci-fi gem, a troubled teenager tormented by nightmares enters into a mysterious sleep study that unlocks the truth about her surreal dreams and the dark shadowy figure within them.

In the latest from acclaimed Chilean filmmaker Pablo Larraín (Jackie) adoptive parents Ema (Mariana Di Girólamo) and Gastón (Gael García Bernal) are artistic free spirits in an experimental dance troupe whose lives are thrown into chaos after their son is involved in a shockingly violent incident.

Lovingly crafted entirely with hand puppets, this hilarious, blood-drenched practical marvel sees the peaceful, secluded lifestyle of two monsters threatened when a group of desperate villagers comes to repay an age-old pact to a wretched demon.

Noémie Merlant (Portrait of a Lady on Fire) gives a fearless performance as a shy amusement park worker whose life changes when a new star attraction shows up and immediately enthralls her with “his” magnificent machinery in this fantastical and heartfelt debut from Belgian writer/director Zoe Wittock.

Unable to come to terms with the death of his wife, a man and his sister-in-law return to the scene of the car accident to perform an ill-fated ritual in this two-handed chamber horror that terrifyingly shines a light on the dangers of extreme grief: unrelenting desperation, loss of self and the evil that exists in our darkest moments of despair.

Read my interview with Writer/Director, Quinn Armstrong from Fantasia 2020

Presented as a lost police training video from the 1980s, an at-first comedic look to the early days on the force for a newly-minted, naive officer quickly turns into a dark, satirical critique on the way our society and law enforcement institutions fail us in this timely, clever, and unexpectedly sobering examination of a broken system.

Visionary director Quentin Dupieux (Rubber, Deerskin) returns with his most accessible and hilarious film to date, a tale of two simple-minded friends who find a giant fly stuck in the trunk of a car and set themselves up to train it to earn money with it. Originally set to premiere at the Telluride Film Festival.

These are just some of the weird and wild feature films screening at Nightstream. To buy tickets and badges and to see the full program and schedule of events, head to nightstream.org.

Thank you for reading! What are your thoughts on Nightstream? Comment down below!