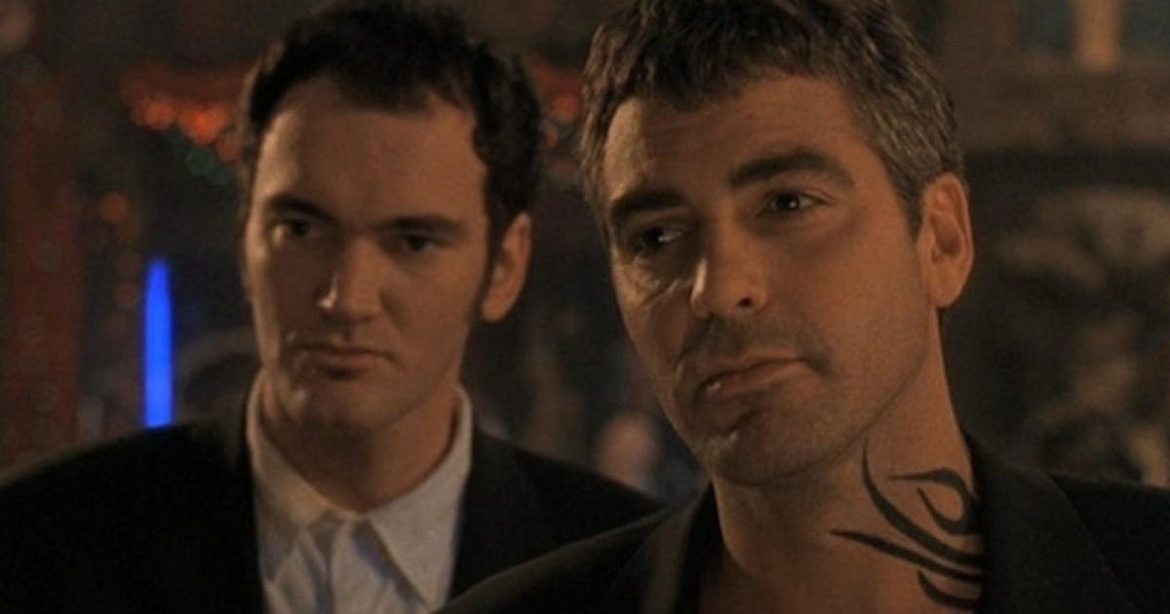 Quentin Tarantino and Robert Rodriguez were on a white-hot streak in 1995. Each had two critically acclaimed, wildly successful features under his belt (for Tarantino, Reservoir Dogs and Pulp Fiction; for Rodriguez, El Mariachi and Desperado). The movies’ intentionally flashy dialogue and postmodern pop-culture-splattered atmospheres dazzled audiences. They had quickly established their creators as some of the most exciting and unique voices in independent filmmaking. (Palme D’Or champ Tarantino, in particular, had become as close to an international celebrity as directors get; he even found himself hosting Saturday Night Live that November.)

Given their similar styles and tastes, it was inevitable that the two phenoms would work together. Their joint efforts started out small — Tarantino played a bit part in Desperado, and both contributed a segment to the disappointingly uneven anthology film Four Rooms. In the next century, they’d make higher-profile collaborations on Sin City and Grindhouse. But amid the sugar-rush of the mid-’90s, the most massive meeting of these warped minds was easily the bloody horror thriller From Dusk Till Dawn.

Dusk celebrated the 25th anniversary of its release this month. The film achieved modest box-office success and went on to become a cult hit, spawning two DTV sequels, a video game, and a TV series. But — as we inevitably must ask of all media with the passage of time — does it itself hold up? The answer is a resounding “Yes…and no.”

The Gecko brothers — Seth (George Clooney) and Richie (Tarantino) — are dangerous criminals on a killing spree with law enforcement hot on their trail. Freedom and safety lie across the Mexican border, but the pair can’t make it there alone. Thus, they enlist the forcible aid of vacationing ex-pastor Jacob Fuller (Harvey Keitel) and kids Scott (Ernest Liu) and Kate (Juliette Lewis).

The Fullers smuggle the Geckos into Mexico in the family RV, and the quintet shacks up in a local all-night biker bar where the brothers have agreed to meet with their contact. Unfortunately, this particular establishment turns out to be a haven for a ravenous clan of vampires — a mere front to lure new victims.

A Tale of Two Movies

Herein lies the main problem with From Dusk Till Dawn — it’s actually two different movies. One is a pulpy, hyper-violent Tarantino joint, the other a garish, freakish supernatural thriller. Either would be fine on its own, but Dusk makes the mistake of trying to have its blood and suck it too.

The first half thrives on a sleazy vibe, rapid-fire banter, and the tense but fun interplay between opposing families. We largely lose that as the film devolves into a phantasmagoric bore, subjecting us to one grisly, splattery killing after another. It largely transforms into a showcase for Greg Nicotero’s gnarly makeup work and mugging from cult actors Tom Savini and Fred Williamson.

The writing doesn’t help. Tarantino had taken the job of screenwriting Dusk back in 1991 as his first paid writing gig. As such, the movie exhibits the work of a writer still finding his voice. His signature style, while certainly present, feels sloppy and muted here. Even though the man himself wrote it, the thing often plays like one of the endless stream of Tarantino knockoffs that arrived in Pulp Fiction‘s wake. (He certainly didn’t hide his notorious enthusiasm for actresses’ bare feet at that early stage, however. Just take a gander at that infamous scene involving a scantily-clad Salma Hayek and a bottle of booze.)

A theme of family runs deep through Dusk — more specifically, protecting one’s family unconditionally. Take, for example, the relationship between the brothers’ Gecko. We learn early on from a news report that Richie is a convicted sex offender. Soon after, Seth leaves Richie in a motel room with their bank clerk hostage, returning to find that he has raped and murdered the woman. Seth’s response is less one of outrage than one of fear he’s set a bad example: “What’s wrong with you? Is it me? Is this my fault? Do you think this is what I am?”

Seth understandably grows impatient with his impulsive, unprofessional sibling. But no matter how jagged things get between them, they care for one another on a fundamental level. Even when Richie turns into a vampire in the biker bar, Seth feels reluctant to stake him. “That is a matter of opinion,” he scoffs when it’s suggested that the snarling beast before him is no longer his brother, “and I do not give a fuck about yours.” (Kate and Scott have a similar hang-up about killing their father once he becomes a “lap-dog of Satan.”)

Protecting those close to you even if they’re monsters? In light of #MeToo and Tarantino’s association with producers Bob and Harvey Weinstein, that concept can’t help but take on a disturbing new meaning. (After the Miramax heads were outed as serial sexual assaulters in 2017, Tarantino admitted that he “knew enough to do more than [he] did.”)

Despite its less appetizing features, there’s plenty to enjoy about From Dusk Till Dawn. First, the performances. Clooney would go on to bigger, better things, but he’s a blast to watch in his fiery breakout role. This was, of course, in the pre-Batman & Robin days when Clooney was far less discerning about the parts he took. Watching this, though, one wonders what might have happened if he’d remained this gamely fearless.

Keitel’s quiet, pensive air, meanwhile, provides a perfect foil to Seth’s powder keg. Lewis (always supremely underrated) grants a gentle, poignant gutsiness to Kate where anyone else might have played her as a mere scared kid. And while it’s easy to see why Tarantino’s acting career never really took off, his shifty, excitable persona serves the film well, much as it did via Pulp Fiction’s Jimmie or Reservoir Dogs’s Mr. Brown.

Did I mention it looks terrific? Rodriguez’s bug-eyed, confrontational style has amped up to nearly insufferable levels in recent years. But here, thankfully, the “one-man film crew” focuses mainly on making a stunningly photographed, frantically edited trip of a picture.

From Dusk Till Dawn certainly ain’t flawless—at times, it proves downright difficult to stomach. Still, it deserves credit for its commitment to its own gonzo premise. The film remains a fascinating work from two great auteurs at a crucial crossroads in their careers.

Thank you for reading! What are your thoughts on From Dusk Till Dawn? Comment down below!

At the time, I was working on a ship that was supplied 10 movies a month on VHS. Brand new ones with one sentence synopsis per movie.
So we saw this with “Two criminals take a family hostage and flee for Mexico” and that’s it.

It’s a FANTASTIC movie to watch with people who have no idea it has vampires in it. If you can find anyone like that in 2021, show them it.