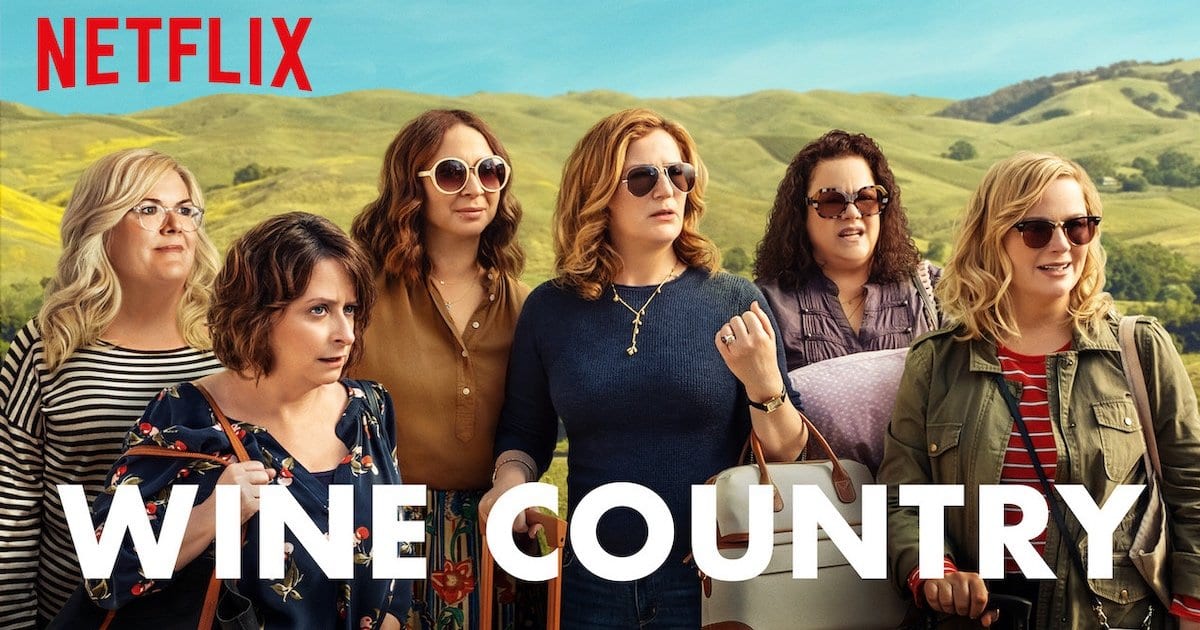 Look I’ll be honest, the only movie I’m remotely excited about is HBO’s Deadwood, the long-awaited return of one of the greatest TV shows ever created. Anything else just looks mildly amusing in comparison. But I just sit around and do nothing. Eventually, I have to practice my long-neglected writing muscle. So when I saw Wine Country on Netflix, directed and starring the reliable comedic talent that is Amy Poehler, it seemed like a decent movie to pass the time until 31st of May — when Deadwood is finally released.

It even co-starred her good friend Tina Fey. I mean, who doesn’t like Tina Fey? — maybe Sarah Palin, I guess?

Rebecca (Rachel Dratch), a successful therapist trapped in a middling marriage, is turning 50. One of her close friends, Abby (Amy Poehler), arranges a three-day birthday celebration for Rebecca in Napa Valley. They will stay in a wonderful summer house owned by the socially awkward widow Tammy (Tina Fey).

All of Rebecca’s longtime friends are invited, each of them connected to their teenage employment in a restaurant called Antonio’s Pizzeria. As expected, each of these women has their own personal issues and quirks. Abby is quite the control freak, having devised an itinerary for the women which she forces everyone to rigorously uphold to. Catherine (Ana Gasteyer) is successful but a workaholic, who can’t seem to leave her phone alone. Jenny (Emily Spivey) doesn’t seem too excited to be reunited with her old friends. Naomi (Maya Rudolph) is terrified to return her doctor’s call. Meanwhile, Rebbecca doesn’t want to admit her age or her unhappiness with her husband.

Yet all of them are trying to bury their personal troubles through wine, laughs, sing-a-longs and female bonding. Yet it doesn’t take long for their individual grievances to pierce through their supposedly joyous weekend.

The Importance of Chemistry 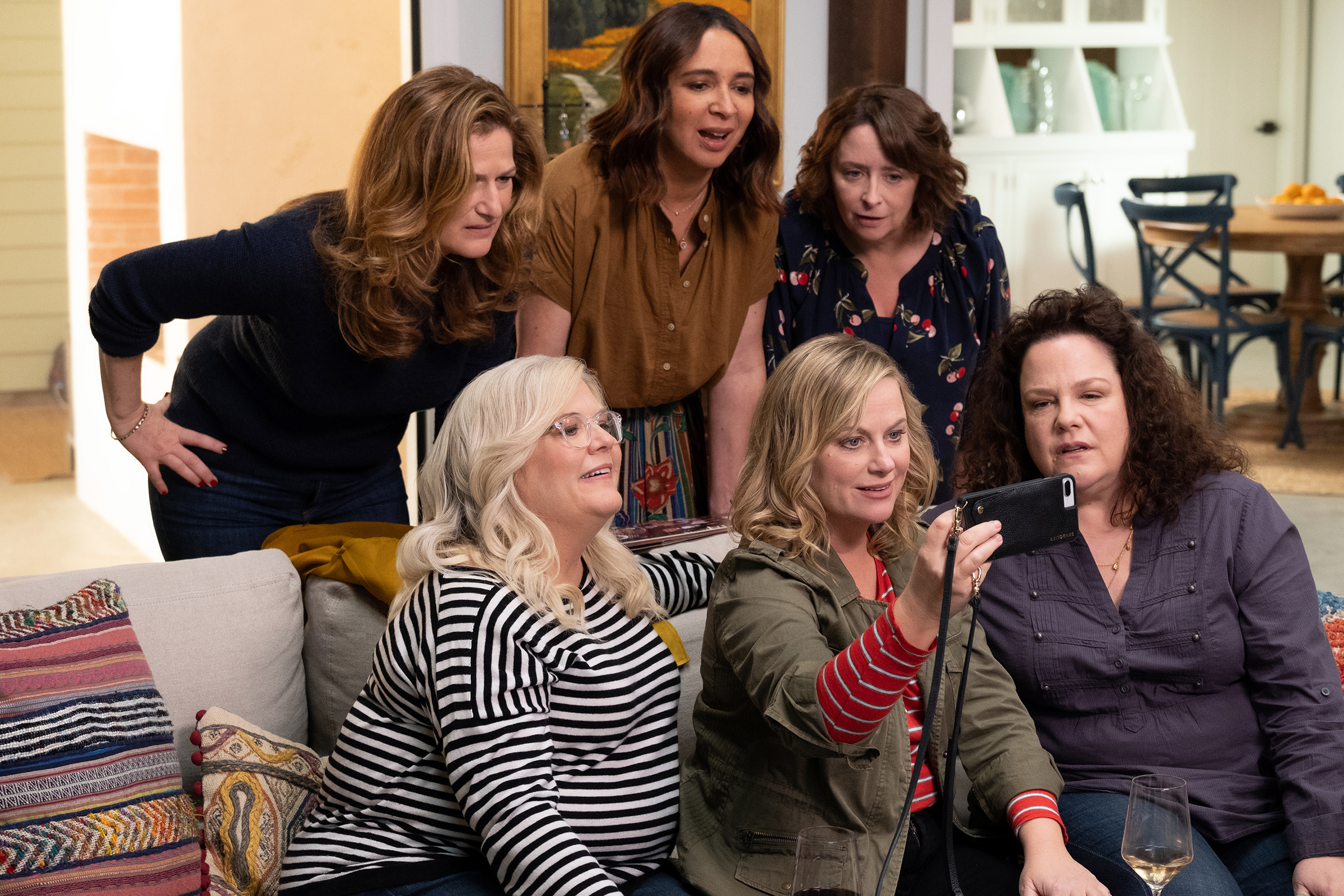 The ladies are taking a selfie. Image via The Rolling Stones

It’s also an ensemble cast, so everyone gets time to shine — though unfortunately, Tina Fey doesn’t get much to do in her occasional appearances through the narrative. Some of the dialogue, which was probably mostly improvised, works well. It might be profanity-laden but never feels like it’s going for shock humor.

Well, at least they are having fun. Image via Time Magazine

Having said that, in the laugh department, don’t expect more than a few hearty chuckles. It’s never boring watching these women having fun together but it’s not hilarious either. There are a few memorable comedic beats: Abby’s stoic expression when Devon (Jason Schwartzman) proposes to have sex is a hoot; the film features plenty of Maya Rudolph’s comedic dance moves; each of these ladies are so naturally funny, they can make you smile with one word of dialog or an expression.

But it never feels like the film is truly capitalizing on their talents.

Like the central plot, it feels like these ladies are having fun but there’s not much more than that. Each one of these comedians can be hilarious but the script seems to rely on their improvisational talents, which can work, but only so much.

There are also some comedic promises that are never paid off. The film introduces a bag full of ecstasy, with the notion that these women will lose themselves in MDMA silliness, but it never goes there.

Without making any accusations, at times this film does feel like a free vacation for these comedians. This is not uncommon in Hollywood. Adam Sandler has made a shameless habit of having movie studios pay for his luxurious vacations by having his movies set in some exotic part of the world. Everyone remembers how much fun Danny Ocean and his gang had in Europe in Ocean’s Twelve.

I can’t fault these comedians for doing something similar — and it’s on Netflix so I didn’t have to pay to see it — but it does feel a little like it. It doesn’t feel like there was enough effort going into this production.

Unsurprisingly the third act of Wine Country tries to raise the emotional stakes. There’s an onslaught of heartfelt words; characters confessing their inner turmoil and unleashing their personal grievances. It’s not as tiresome as the third act of most romantic comedies, but the emotional drama still feels unearned. One particular subplot seems too heavy for this lighthearted comedy.

I understand that the third act is basically unavoidable. The characters are likable enough and the script is organic enough that it doesn’t feel too forced, but there’s just not enough to pull one’s heartstrings. Some people have ridiculously compared this to Alexander Payne‘s Sideways — mostly because this film was also set in wine country, but had two middle-aged men dowsing themselves with wine instead of five middle-aged women.

Sideways is also a movie that has a perfect balance between character drama and quirky comedy. Wine Country never comes close to being either that funny or moving.

Granted, I hadn’t expected this movie to be on the quality level of an Alexander Payne movie. Wine Country never pretends to be anything more, but perhaps this is also partly the problem.

If you’re a fan of Amy Poehler or an SNL aficionado, you will likely find some enjoyment here. Even so, Amy Poehler directorial debut seems to play it too safe. You will chuckle a few times, you’ll enjoy watching these banter through the approximately 1 hour and 43-minute running but you’ll quickly forget about it after.

It’s certainly not a miserable experience but a film with such comedic caliber should have been funnier.

Thanks for reading!  What are your thoughts on Wine Country?  Comment down below!