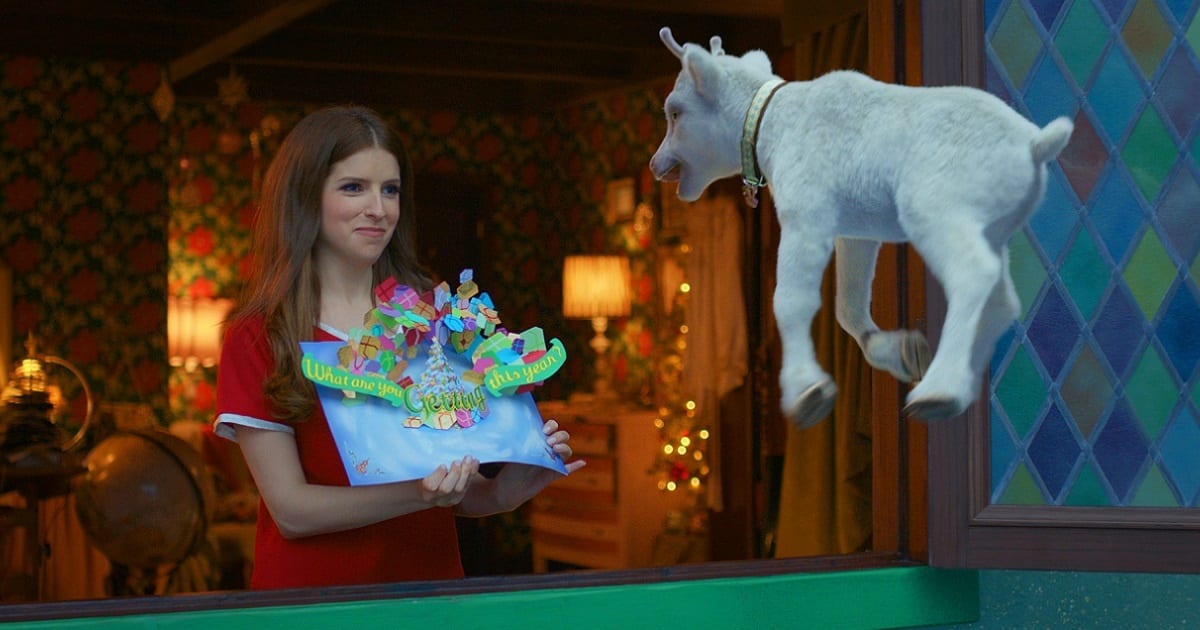 Since Netflix began pumping out original content every single week, there’s been a clear difference between their high-end properties such as Roma or the upcoming The Irishman and something such as Tall Girl or Sierra Burgess is a Loser. Putting the obvious disparity in quality aside, there’s a clear difference in how these movies look and feel. Many of Netflix’s movies are very bright and flat, looking more like a sitcom than a feature-length film so that they’re easier to watch on phones and computers. They’re also the kind of movies that you can have on in the background while you tend to chores around your home. They’re easily understood, and you won’t miss a beat if you happen to be preoccupied with something else while it’s playing. Disney+ is following in those footsteps with Noelle, a Christmas movie that is light and never anything else.

That light touch is accented by Anna Kendrick, who plays Noelle Kringle, the sister to Bill Hader’s Nick Kringle. After the passing of their father, Nick is appointed as the new Santa and leader of all Christmas festivities for the North Pole, though he feels overwhelmed by the position. So when Noelle suggests that he take a weekend to relax, he does just that, retreating to a far off city known as “Phoenix” for some warm air. Naturally, Nick’s disappearance causes the North Pole to go into a tailspin with Christmas day just around the corner, and everyone is quick to blame Noelle for her offhand suggestion to Nick. Feeling guilty, Noelle attempts to make up for the miscommunication by venturing to Phoenix as well in search of Nick, enlisting the help of a local private investigator (Kingsley Ben-Adir) to help track him down in time for the holiday.

A story where someone out of the ordinary has to take over the mantle as Santa is a staple of Christmas movies. Taking people from the North Pole and plopping them in a different location for comedic effect is equally familiar. So when an extra cheery Anna Kendrick confuses random individuals with her Christmas talk while unaware of general societal norms because she is from the North Pole, you’re not laughing because of Noelle‘s ingenuity. Rather, you laugh because of Anna Kendrick and her generally charming personality. (If you laugh at all, that is.) Realistically, there are only four reasons why you should watch Noelle:

Similar “algorithm logic” has been attributed to many streaming movies recently as studios have pushed for more and more content. The idea is simple: get a few likable stars in a likable setting and let them do their thing for 90 minutes or so. Don’t worry about making the film too complicated, just make the film reasonably watchable for someone in the comfort of their home. That’s precisely how Noelle operates. Anna Kendrick and Bill Hader are merely playing extensions of their public personas, which, for a lot of people, is passable.

For much of the movie, Hader is anxious — as you’ve seen him so many times before. His character, Nick, spends his time getting rid of all the stress in his life by becoming a yoga instructor in Phoenix, unearthing one of the more tired relaxation clichés in film for one more spin. Kendrick does what she does best by offering lovably snarky one-liners and having a generally delightful disposition.

But is it good? Well, that’s another conversation. Noelle is not meant to have your full attention, or else you’ll quickly realize that it is half-baked and even lazily put together. But as a byproduct of you passing through your living room every so often to see a few stockings and either Kendrick or Hader offering a witty, offhanded remark on the screen, Noelle might be able to get away with a bit more.

Noelle initially benefits from its lightly progressive and meta touch, which adds a slightly different angle to this familiar tale. Naturally, it plays off of the iconography of Christmas by having a feminist spin, but like the rest of the film, it isn’t deftly handled or thoroughly fleshed out.

The modern touches are interspersed throughout other parts of the film as well. After both Nick and Noelle leave the North Pole, the Santa mantle is taken over by their cousin Gabe Kringle, played by Billy Eichner, who is also acting as a version of himself. Because this is a Christmas movie in 2019, Gabe is seriously into tech and is constantly looking for ways to modernize and homogenize the Christmas process. Gabe’s desired changes include standardizing gift wrapping colors, using Amazon Prime, and even sending out uniform letters to children making them aware of their naughty/nice status.

Similarly, another running gag — one that goes on far too long — is that every person in the world wants an iPad for Christmas. But as with many movies that attempt to be current, Noelle feels like it comes from a script that was on the shelf for a while as its comments and observational humor on Christmas, gender roles, and consumerism are always slightly obsolete or unsophisticated in their presentation. Also, have you seen iPad sales recently? They’re not doing so hot. It’s a similar problem to making movies about popular apps; by the time the movie comes out, the reference feels dated.

While Lady and the Tramp, the other newly released movie that Disney+ offered upon its launch, actually looks like a theatrically released movie, Noelle does not. It is riddled with cheaper effects and humorously bland production design that will probably look better when scrunched on your phone. Aside from some stock footage of aerial shots over Phoenix, the only signifier of the setting is Kingsley Ben-Adir’s character’s insistence on wearing either Arizona State of Phoenix Suns attire in just about every scene. That way, you’ll surely remember that the town is definitely Phoenix.

Ultimately, Noelle is a movie that earns the saying “there is no there there.” Shirley MacLaine, industry titan and Oscar winner, merely exists as Elf Polly, a character that comes along with Noelle for the journey to Phoenix because…reasons. Her character also acts as a solid exemplification of the movie as a whole. It’s washed completely clean, devoid of any true substance…unless it’s on in the background while you’re folding laundry. In many ways, Noelle is also the perfect encapsulation of where we are with streaming viewing habits that something so trifling is one of the first offerings from a new streaming service that is looking to change the game. I can’t figure out whether I’m slightly amused or downright horrified by that idea.

Thank you for reading! What are your thoughts on Noelle? Comment down below!

[…] party was planned. So, Clay (Eli Goree) celebrated at a hotel with some iconic friends: Malcolm X (Kingsley Ben-Adir), Jim Brown (Aldis Hodge), and Cooke (Odom). This feels like the stuff of fantasy, or revisionist […]

[…] who made peace between her people and the English settlers. Aimed at a young audience (as all Disney movies generally are), Pocahontas is essentially a message movie about tolerance and respecting the […]

I have no interest in ever watching this Disney fluff. I’m gonna hold out on Disney+ until “The Falcon & The Winter Soldier” rolls around, because I’m mainly interested in the MCU shows exclusive to that platform.

That might be a good idea! Disney seems keen on releasing a LOT of similar content to Noelle

Yeah! Just because it’s a kids/family film doesn’t mean that Disney shouldn’t add some meaty & logical substance in order to make them stand out a bit more.

Can’t argue with you there :)

Agree 💯%! I was expecting so much more from this than what it turned out to be. What stood out to me was the really budget CGI, especially for Noelle’s reindeer (that we kept calling a goat), Snowflake. At times it was so bad that the fur actually looked like shiny plastic. It is what it is, I guess.

The other reindeer as well! I really think Disney was hoping that you would watch this one on your phone so that you wouldn’t be able to notice lol!

Probably. But we watched that sucker on the 65″ 4K HDR screen. It was straight-up cringy. 🤦🏻‍♂️

Helpful review, but I would kindly suggest to limit your ranting, because you irritated the same idea of watching this movie while “folding laundry” too many times. In short – make it tighter!

Less so ranting — I could never feel strongly enough about this movie to rant lol! — but more so a fun little jab. But also, I definitely think it is worth noting more than once because, realistically, a situation where your attention is diverted is where Noelle will succeed the most. Regardless, I appreciate the note! Thank you! :)

“The idea is simple: get a few likable stars in a likable setting and let them do their thing for 90 minutes or so. Don’t worry about making the film too complicated, just make the film reasonably watchable for someone in the comfort of their home.”
In fairness, that covers a shit-ton of movies made under the studio system (including a lot of Disney live-action from the days of The Shaggy Dog until they hit their stride again with Little Mermaid). Which sort of proves your point, when there’s a huge demand for content, a lot of it’s going to be mediocre.

Yup! I tend to think that there are just not enough good screenwriters for the amount of demand. Obviously there’s probably a shortage of skilled workers in other areas as well, but I feel as if approximately 95% of streaming movies would be 1000x better if they had a mid-level writer on board lol! :)

How High Can ‘Dumbo’ Fly? (The MovieBabble Podcast...

‘In The Tall Grass’ Starts Spooktober Off Nicely