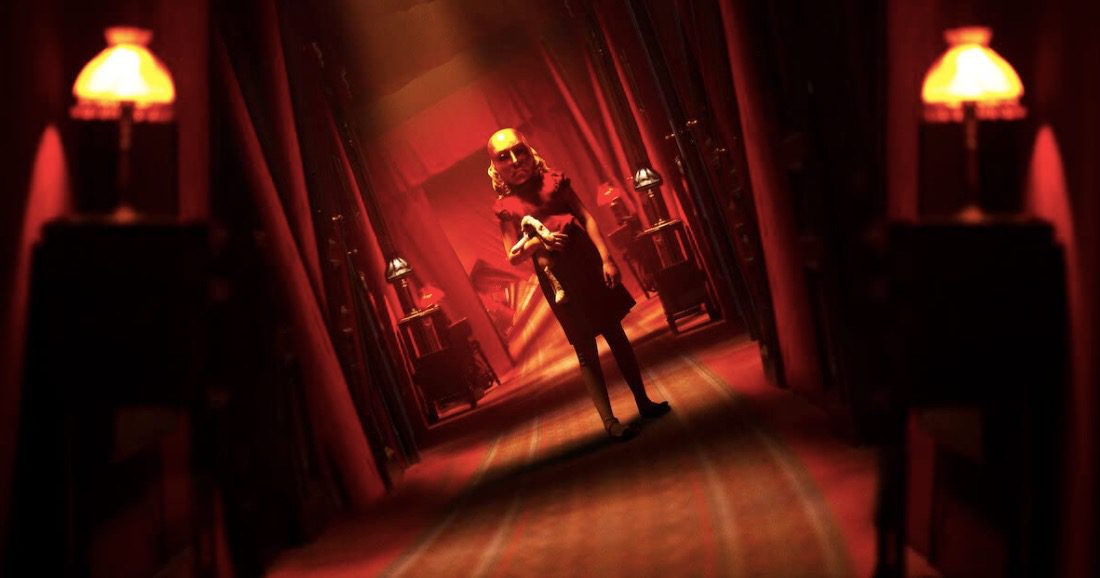 Cadaver is Netflix’s latest post-apocalyptic horror film (the Netflix algorithm seems to love setting movies in a horrifically dystopian near-future) and is directed by Norwegian director Jarand Herdal. It stars Gitte Witt, Thomas Gullestad, Kingsford Siayor, Tuva Olivia Remman, and Thorbjørn Harr, and follows a family of three that, in the starving aftermath of a nuclear disaster, attends a charitable event at a hotel where all attendees can have a full meal and take part in a game of interactive theater. However, it all soon takes a dark turn when they realize people are starting to disappear. With a great premise like that, how could it go wrong?

I must say, I’m not exactly a horror guy, but I can certainly appreciate them when they are well-crafted. I enjoy certain horror movies, but I need a strong sense of terror, something that genuinely scares me or at least makes me shiver, or it just doesn’t work. Cadaver certainly does have an interesting premise set in a post-apocalyptic Norwegian hell house (with some very solid production design too). Yet, that premise is squandered with its overly predictable, generally tedious storyline and “scares” that wouldn’t make a child jump. The film is never involving: you see where it’s headed very quickly, and the attempts to frighten along the way come across as mostly hollow.

There’s something to be said about the thrills of a straightforward horror film with over-the-top carnage; if Cadaver went that route, perhaps at least a few gorehounds could have found solace in it. But the film suffers from not actually showing the horror. With the exception of one gruesome neck-slicing scene, you don’t experience any horrific immediacy as the camera pans away, often time to different rooms as people scream. This allows for, well, nothing really. No horror, no fear, nothing. It’s typical for a low-budget horror movie to use these tactics in an attempt to conceal budgetary restraints, but in this case, you end up disappointed, like you’ve been cheated out of something exciting rather than watching something that is carefully considered to build suspense. If you look closely, you can see a good film with a unique premise and semi-talented performers, yet Cadaver sadly ends up feeling more like a bland Norwegian rip-off of Saw with a strange sprinkling of Five Nights at Freddy’s.

I don’t want to completely bash Cadaver; Like many of Netflix’s horror films, there is some good to be found in it on occasion. Gitte Witt and Thomas Gullestad both give quite good performances, even if they’re slightly overshadowed by the predictability of the film (like everything else). The “villain” hotel manager played by Thorbjørn Harr is a nice addition but unfortunately only manages to shine in his final moments. Apart from them, the rest of the performances are rather mediocre. No one stood out, nor does the film allow for much character development. As individuals soon start to “disappear” from this game, you don’t feel any sense of sadness or remorse as Cadaver never develops a connection between its characters and audience. What could be rather shocking or tragic is mostly just lethargic.

There isn’t much else to say when it comes to the failure of Cadaver — it’s mostly a bland genre exercise that comes and goes without much of an impact. Jarand Herdal’s direction doesn’t exactly help: the lighting and color gradient throughout is set to resemble the terror, pain, and darkness the world is experiencing after the apocalypse, but it’s mostly drab and expressionless.

With all that being said, you’ve can probably realize the amount of lingering disappointment I felt after watching Cadaver. The poster is arguably the best thing about the movie. In the right hands, Cadaver has a premise that could have very easily been one of this year’s best surprises (or at least a fiendishly entertaining diversion for almost 90 minutes) but we’re left with very little to appreciate. There are plenty of other horror films that have dropped recently on Netflix, headlined by Remi Weekes’ His House, so Cadaver might be one to skip.

Thank you for reading! What are your thoughts on Cadaver? Comment down below!

[…] a button to deploy a drone missile from thousands of miles away? But Outside the Wire is another lacking Netflix genre film, so it rarely gives this idea the consideration it […]