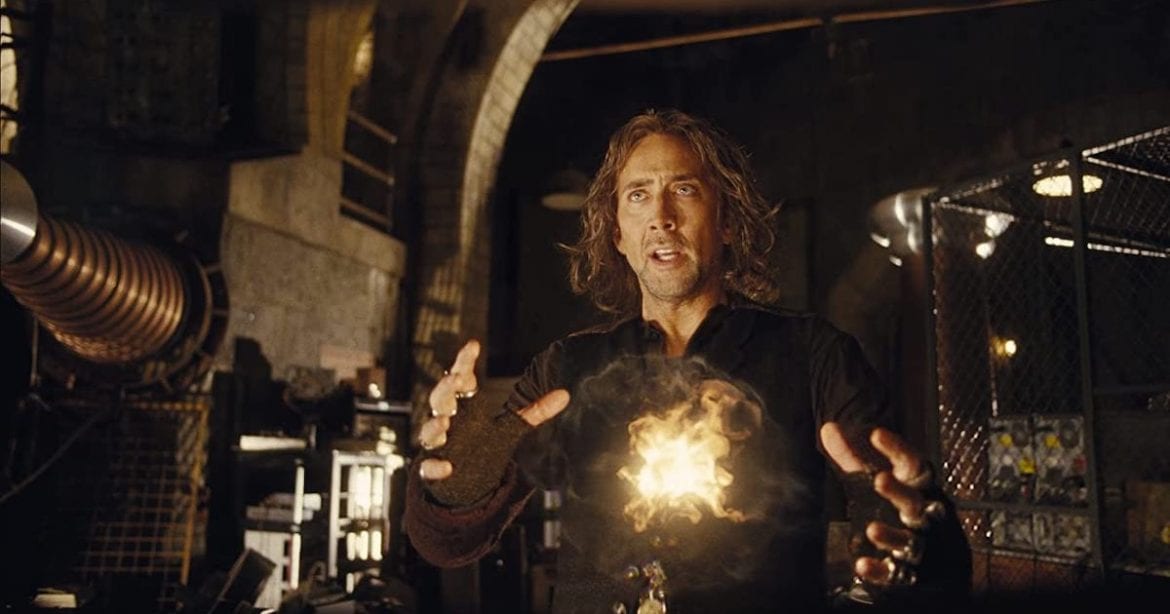 Like Prince of Persia (2010), I had completely forgotten that The Sorcerer’s Apprentice (2010) existed. (Apparently, 2010 was the year for forgettable live-action Disney films.) The only thing I remembered about the film was when David (Jay Baruchel) was training to be a sorcerer and a ball of energy hits him in the crotch. Needless to say, I had pretty low expectations for the re-watch.

I was both pleasantly surprised and unimpressed. It was more exciting than I remember, but it also wasn’t as overwhelming as I had hoped it would be. It was, for all intents and purposes, a film — and that’s it. Like Avatar (2009), the good and the bad sort of cancel each other out to make an okay movie, only in this case, more forgettable.

Alright, let’s nail down the plot before we do anything. The Sorcerer’s Apprentice is about Dave (Baruchel), a young boy in New York who is destined for greatness as the spawn of Merlin or whatever. He runs into Balthazar (Nicolas Cage) — one of Merlin’s apprentices — on a school field trip, who entrusts him with a special dragon ring that gives him magical powers. But then Horvath (Alfred Molina) — one of Merlin’s apprentices who is evil and wants to resurrect Merlin’s third and even more evil apprentice, Morgana la Fée (Monica Belluci) — shows up. After a short scuffle, both him and Balthazar end up getting trapped in an urn for 10 years.

10 years later, Dave is an awkward yet stupid smart college student. Balthazar shows back up and convinces Dave to train to be a sorcerer. This is a difficult task because Dave is in love with Becky (Teresa Palmer) and also because magic is scary. But Dave ends up accepting his training and he becomes the greatest sorcerer that ever lived, defeating Morgana so he and his girlfriend can live happily ever after.

A Cast Made in Hell

I have no idea why this cast exists, but it does so we have to analyze that. First of all, we have Nicolas Cage…as a sorcerer? That’s strange enough, but then we also have Monica Belluci and Alfred Molina as sorcerers, too? What a strange team (or rivalry, as the case may be). None of them are super convincing in their roles either. They never break into the role and so they all just feel like actors playing roles rather than the characters themselves. Yeah, it’s a mediocre Disney film, but that doesn’t give you the right to just phone it in. I think the only person I could halfway see being a real sorcerer is Nicolas Cage, and that’s just because he’s Nicolas Cage.

And then we have Jay Baruchel playing himself. Just awkward, nerdy, and kind of out-of-place in everything he is in. Oh, and also that one kid from Night at the Museum (2006). We get to make fun of him the whole movie because he peed his pants. Classic Jake Cherry.

Cut That Out (Get it? Editing!)

The Sorcerer’s Apprentice has some of the strangest editing in certain parts. I think the weirdest sequence is in the beginning when the narrator is telling us the story of Merlin and his three apprentices. It felt like a bad, unused cut in The Mummy. Everything was choppy and there were some strange zooms every so often. I really had no idea what was happening but it was certainly headache-inducing.

The rest of the film wasn’t too bad, though. The CGI wasn’t terrible or amazing — it just did its job. I was a big fan of the cool spells that allowed you to walk into mirrors. The water-like effect used for that transition was mesmerizing.

I Love You, Nicolas

While I think the casting of Nicolas Cage was strange and out of place, I still loved him. I don’t care what kind of movie Cage finds himself in — good, bad, mediocre — he always ends up being my favorite.

Nicolas Cage has what the kids like to call “chaotic energy.” You really don’t know what he’s going to do next or how he’s going to react and it keeps you on your toes. I assume that that is what he’s like in real life as well. There were times in this movie that I’m sure Jon Turteltaub was just like, “Okay, now use your magic here, Nic,” and Nicolas Cage just did actual magic. Like, he can actually make lightning spring from his hands. That’s just a thing Nicolas Cage can do.

Stand There and Look Pretty

The person I feel the worst for in this film is Teresa Palmer. The only reason she exists is to be a love interest for Dave. Her lines are all cliché and she is the epitome of an indie girl. She works at the local radio station and apparently her idea of underground music is OneRepublic. Basically, her personality is paper-thin and she’s only there to be a pretty face.

It’s quite infuriating, really. Of course, Palmer is a model, so maybe director Jon Turteltaub just didn’t quite know what to do with her? But then later we saw her in better films like Hacksaw Ridge (2016) and it infuriates me even more how little this film utilizes Palmer’s talents. This film would’ve been vastly improved if she was the sorcerer rather than Jay Baruchel.

Some things in this movie are just so violently 2010 that it hurts. The first thing that comes to mind is the soundtrack. I mentioned it before, but OneRepublic isn’t indie as much as this movie wants to convince us it is. Neither is Jimmy Eat World.

I think the most cringy part of The Sorcerer’s Apprentice is when Dave is showing off his Tesla coils (you know those scientific-looking pillars that can shoot lightning out of them?) and programs it to fire along to “Secrets” by OneRepublic. Becky reacts with awe and says, “You listened to my show!”

No, Becky. Everyone knows this song. You’re not special for playing it on repeat on your stupid little radio show. Please play some better music.

Like I said, this movie balances out its good and its bad to make an okay movie. Nothing stands out and so it gets forgotten in the mess of live-action Disney films that just never caught on.

There was some strange editing, but the special effects were cool. The casting was strange but Nicolas Cage was involved and that made it better. It doesn’t pass the Bechdel Test or have actual indie music, but it does have cool Tesla coils and some funny moments.

Honestly, if you’re not as in love with Nicolas Cage as I am, it’s probably not worth your time. But if you just want to kill about an hour and a half during quarantine, not a bad way to go. As for me, I think I’ll go back to watching Thomas and the Magic Railroad.

Thank you for reading! What are your thoughts on The Sorcerer’s Apprentice? Comment down below!

Yeah, it’s no masterpiece, but it’s definitely way better than it should have been.

You know what? You are absolutely right