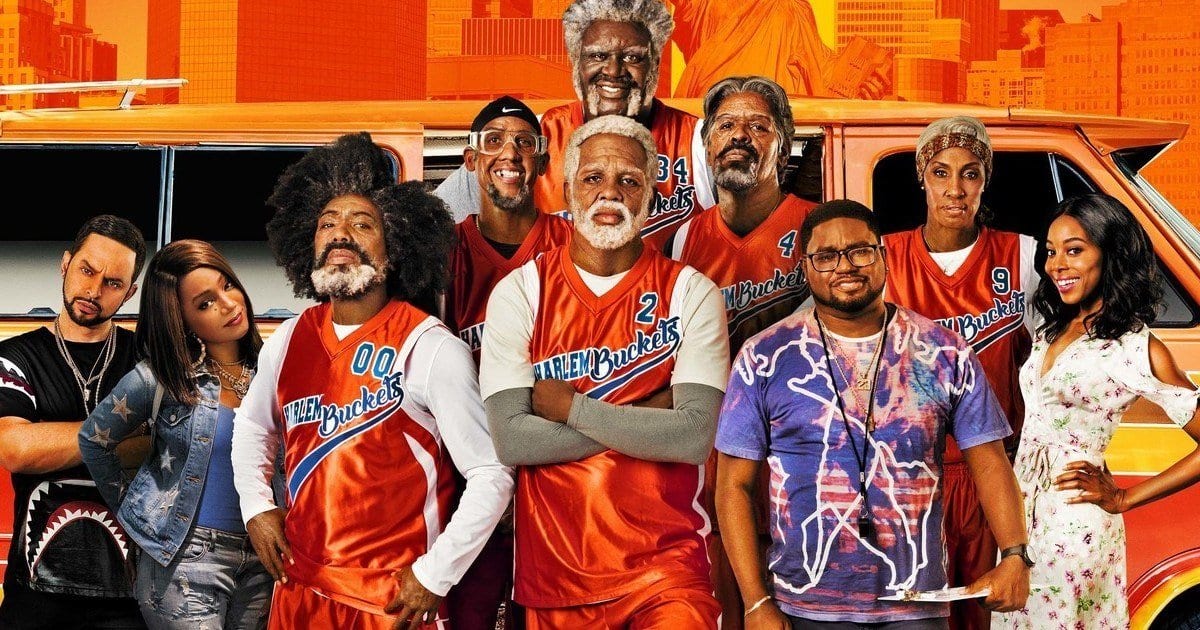 As an endorsement with Pepsi, NBA star Kyrie Irving would put on prosthetic makeup to look older and challenged a couple of young folks to a game of basketball. When he put on the moves, everyone watched in shock as they saw an elderly man do unbelievable dunks. The campaign would run for just a few years and then went quiet. Then, Pepsi set out to make a feature-length film around the elderly player, Uncle Drew.

After draining his life savings to enter a team in the Rucker Classic streetball tournament in Harlem, Dax (Lil Rel Howery) is dealt a series of unfortunate setbacks, including losing his team to his longtime rival(Nick Kroll).

Desperate to win the tournament and the cash prize, Dax stumbles uponthe man, the myth, the legend Uncle Drew (Kyrie Irving) and convinces him to return to the court one more time.

The two embark ona road trip to round up Drew’s old basketball squad (Shaquille O’Neal, Chris Webber, Reggie Miller, Nate Robinson, and Lisa Leslie) and prove that a group of septuagenarians can still win the big one.

In 2012, as an endorsement for Pepsi Max, PepsiCo teamed up with Kyrie Irving and disguised him to fool people into thinking he was an elderly man who was too old to play basketball. When arriving at the basketball court, people had their doubts about him playing, but once he got the ball, his dribble moves and dunks grabbed everyone’s attention.

After the first couple of chapters, some familiar NBA names then came on and got in prosthetic makeup and joined Kyrie Irving in on the fun.

On February 16, 2017, PepsiCo announced that they would partner with Temple Hill Entertainment for the production of a feature-length film centered around Uncle Drew. On September 5, 2017, ESPN’s SportsCenter revealed the cast via their Twitter account. Kyrie Irving learned he was traded from the Cleveland Cavaliers to the Boston Celtics while in the middle of shooting a scene. Lil Rel Howery told Slam Magazine that he took a moment away from the set, then came back to applause from the crew.

The comedy works really well with the story and setting. Filled with basketball jokes and references that fans will enjoy. This film knows what it is and in no way tries to take itself seriously.

There is some slapstick comedy, but the film relies on verbal humor the most. As expected, the one who steals the show is Shaquille O’Neal. The Diesel shows off his best work off the basketball court and in the club, with one wild dance battle sequence.

Back in 2012, it was such a marvel to see Kyrie Irving get in character and pull out the moves on people. Fast forward 5 years later, and the magical feeling of seeing Kyrie in the costume and playing just fades away. After the first couple of times seeing him play, you then remember it’s an actual player under all that makeup.

That’s not to say there still isn’t fun to be had. Though it lost its magic, it’s still fun to see Kyrie in all that makeup and play ball. It’s also fun to see the retired NBA stars play with their own makeup as well. These retired players play their exact mirrors of themselves in their heyday. It would’ve been fun to see something different — maybe have Shaq go full-on Stephen Curry in a game. The NBA players should get a pass on not having the best performances since their main profession is basketball. However, the rest of the cast is just not as entertaining as the NBA players. Credit Lil Rel Howery for giving the best he can with the character he’s given, but it seemed anyone could be in that role.

Tiffany Haddish’s character is loud and can be annoying. No real effort put into her character. Nick Kroll seemed to have had a lot of fun with his character, as his performance was more tolerable than the performances of others.

Tries to be Sentimental

There are a few scenes where the movie tries to hit the emotional notes. The movie tackles some emotions with the friendship of these old timers. The only issue is that it comes in into play just a little bit late and should have been acknowledged quicker.  As constructed, it feels forced.

The movie works well with what it’s given. It knows not to go too deep. It gives its time with a given situation, but then it’s back to basketball.

Puts You in the Game

The last act of the movie is the final few games in the tournament, and as it goes along, you feel the tension rising. Visuals of baskets being made are easy to follow and dunks and three-pointers are viewed from wide-angle shots. It helps the movie capture the pressure that’s on that court while showing the skill involved.

Thanks to the magic of editing, the game goes by really quick but also lets you know that it’s going down to the wire. The movie always cuts back to the score, so you’re always aware of what’s happening and what’s got to happen.

With its zany plot and characters, Uncle Drew sure is a good time. It’s great to see these retired NBA players out on makeup and play like they used to. The performances could have been a bit better for the rest of the cast. Nonetheless, there is plenty of fun to go around in Uncle Drew.

Uncle Drew is at the top when it comes to movies based on commercials. Well, maybe below Space Jam. Still waiting on that sequel with LeBron James! Thanks for reading!  What are your thoughts on Uncle Drew?  Comment down below!