‘Cry Macho’: Age Is Not a Deterrent

Once again, Clint Eastwood shows us how it's done. 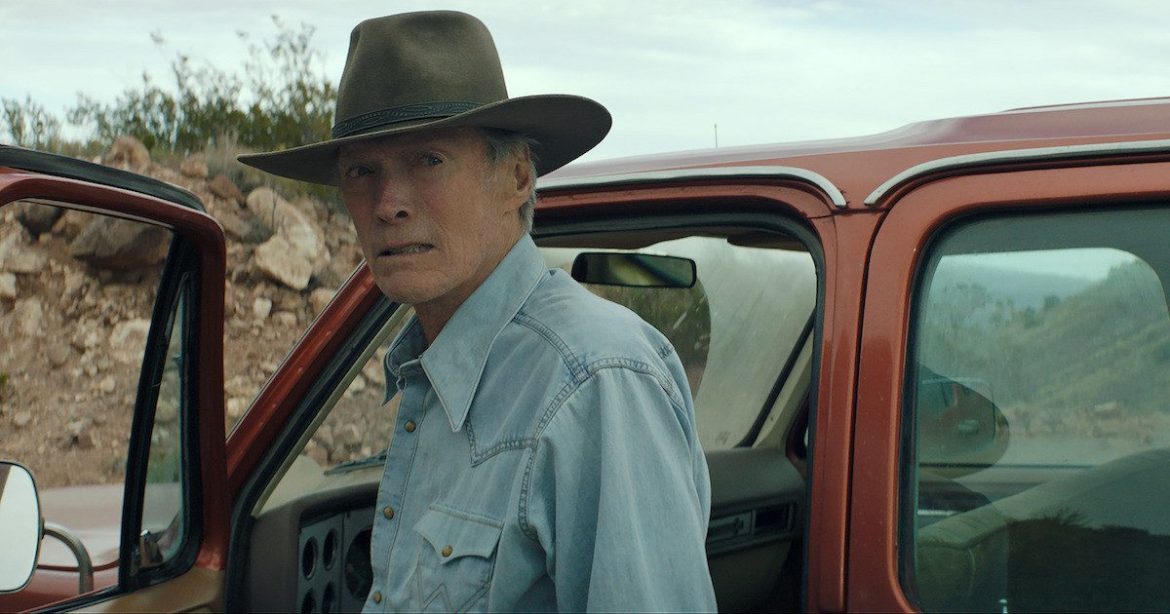 The production background of Cry Macho spans nearly five decades. The screenplay had been kicking around in the early seventies. After numerous studio rejections, screenwriter N. Richard Nash revamped the script into novel form. The positive acclaim for the novel led to its eventual optioning for the screen by Twentieth Century Fox.

In the late eighties, Clint Eastwood, then 58 years old, had already been offered the lead role. The squinty-eyed megastar wasn’t interested in starring in the film, though he did show an interest in directing it. Instead of himself, Eastwood suggested the great Robert Mitchum for the part. This wasn’t to be, however, and in the early 1990s, production had started with Roy Scheider in the lead part, but this project also fell through.

Out of all people, Arnold Schwarzenegger was offered the role. He was interested, but his political ambitions had put the project on hold until it was eventually canceled due to personal issues — you can read the dirty details elsewhere. By then, N. Richard Nash had already passed away and he was never able to see his story on the big screen.

Then in October 2020, it was announced that Clint Eastwood, then 90 years old, would not only direct but star in Cry Macho. It’s fun to imagine how the film could have been if earlier productions had been successful — undoubtedly the 1980s version with Eastwood directing and Robert Mitchum starring being the most intriguing one.

On playing the part at such a late stage in his life, Eastwood felt that it was something he had to grow into, “it’s fun when something’s your age, when you don’t have to work at being older.”

Cry Macho is about a former rodeo star, Mike Milo (Eastwood), who is visited by his former employer, Howard Polk (Dwight Yoakam). Howard wants Mike to go to Mexico, to find his estranged son, Rafael (Eduardo Minett), and bring him to the edge of the border, where Howard will be waiting for them. Howard will then help Rafael cross the border.

Due to some legal issues, and his troubled relationship with Rafael’s biological mother, Leta (Fernanda Urrejola), Howard is not able to do this himself. Due to a personal debt that Mike owes Howard, he reluctantly accepts his request.

After an awkward encounter with Leta, Mike manages to find Rafael, who is making money through the underground cock-fighting circuits (using his prize-rooster called Macho). With promises of a better life, and a renewed relationship with his father, Mike manages to convince Rafael to go with him.

Though they initially clash in the beginning, they naturally begin to form an unlikely bond. Their journey to the border is filled with peril, including corrupt cops and gun-toting associates of Leta’s. But by the end of it, both characters go through their own form of self-discovery.

If you’re familiar with Eastwood’s filmography, it shouldn’t be surprising that the story would interest him. In some respects, Cry Macho is an amalgamation of Eastwood’s earlier work. There’s the obvious; this is the first time, after Unforgiven (arguably his greatest film), that he dons a cowboy hat. It’s the Western genre that made Eastwood a star and into an icon. Cry Macho is not a Western (though one could classify it as a neo-Western) but it clearly plays off Eastwood’s legendary Western status.

There is the familiar trope of a wiser older man educating a cocky youngster. In many of his films, we see the old generation teaching the new generation a few important lessons. In Heartbreak Ridge, Eastwood plays a grizzled drill sergeant taking on a group of undisciplined young men; he taught Charlie Sheen how to mow down baddies in The Rookie; In Space Cowboys, he plays a former astronaut who is called back into duty (alongside three other retired astronauts) due to his knowledge of a Soviet satellite; in Million Dollar Baby, he plays an aging boxing trainer showing a young woman the ropes; In Gran Torino, Eastwood plays a tortured veteran taking a young man under his wing; he directed Tom Hanks in Sully, in which he played a veteran pilot who due to years of hardened experience, managed to save the lives of hundreds, if not thousands of people. 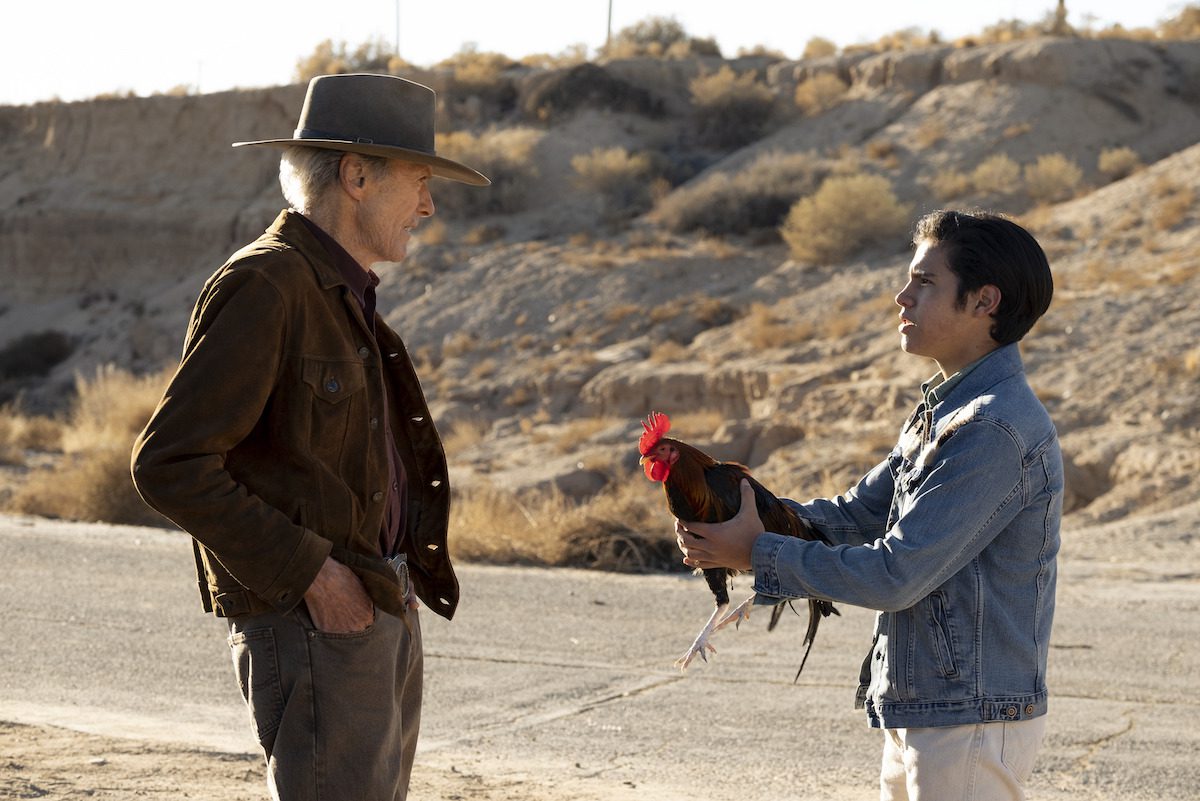 While Cry Macho on the surface seems to replicate some of these familiar themes, it’s actually much more similar to his previous somber starring effort, The Mule, wherein his main character, Earl, was not some grizzled badass, but more of a loser. Mike might not have reached the same degenerate heights as the narcotic-smuggling Earl, but he could have done a lot better for himself.

Mike once had a promising career in the rodeo circuit, winning award after award. But his stardom faded after a personal tragedy turned him into a self-destructive mess.

Now he’s a shell of his former self. While he teaches the young Rafael a lot of important life lessons, he admits that despite the macho image, he isn’t someone to necessarily admire; “This Macho thing is overrated… That’s about all they end up with. It’s like anything else in life, you think you’ve got all the answers, then you realize, when you get older, that you don’t have any of them”.

And then, as Mike mournfully states, it’s “too late”. We make decisions and some of them turn against us. And we must live with the consequences for the rest of our lives.

Cry Macho is certainly not perfect. Despite the script being passed around by numerous executives, the dialogue can be exceptionally clunky. An awkward exposition dump early in the movie being the most egregious, especially irritating considering this information is reiterated soon after.

The acting by young Eduardo Minett is uneven. Some of his line delivery, especially in the more emotional moments, isn’t as convincing as it should be. Luckily, his chemistry with Eastwood works quite well.

Signs of Eastwood’s old age are admittedly quite noticeable on screen. Whenever he needs to do something physical, it obviously required a lot from the legend. Eastwood walks and lumbers around like an old man. His voice is huskier than you might remember. When Eastwood throws a punch, it’s hard to believe it would have much of an impact. One scene involving Mike retraining a wild horse through his rodeo expertise, is portrayed via obvious stunt double and close-ups. Technically, using modern CGI, Eastwood’s face could have been digitally pasted on the stuntman, but Eastwood probably wasn’t interested in such modern trickery.

Nevertheless, none of this impedes his presence on screen. Eastwood’s performance is subtle, dignified, and poignant in all the right moments. His performance imbues the film’s nature: straight-laced, restrained, unpretentious. As he plays an introverted character, whose been processing his grief for decades by now, he’s not just going to burst into dramatic soliloquies. He’s long past that.

Even so, occasionally, with just a small change in his speech, when mentioning a loved one from the past, the pain reveals itself. When this character finds reciprocal affection with a Mexican café owner, Marta (Natalia Traven), you can’t help but cheer him on. And one hopes that by the end of the film, he will find happiness again.

As the script was written in the seventies, the film also takes place in the seventies — making this a period film. It feels like a film that belonged in the seventies. It’s a modest character study, almost deprived of any typical Hollywood sensationalism. There’s some tension, even the occasional threat of violence, but it’s not a thriller. It’s all about the characters’ journey.

It’s also a stunning film, courtesy of cinematographer Ben Davis. The film is worth seeing in the cinema just to see that Mexican countryside (as well as its beautiful night skies) in all its big-screen glory.

Eastwood’s directing has been infamous for its efficiency. He’s not some egocentric perfectionist demanding countless retakes from his performers, nor will he waste his crewmembers’ time for some crazed artistic impulse.

Often enough, the films are below budget and under schedule. Eastwood is a no-nonsense director. He gets what he wants and moves on. With Cry Macho, Eastwood managed once again to finish production a day ahead of schedule. There’s no sense in arguing the obvious: Eastwood still has it in him.

Thank you for reading! What are your thoughts on Cry Macho? Comment down below!