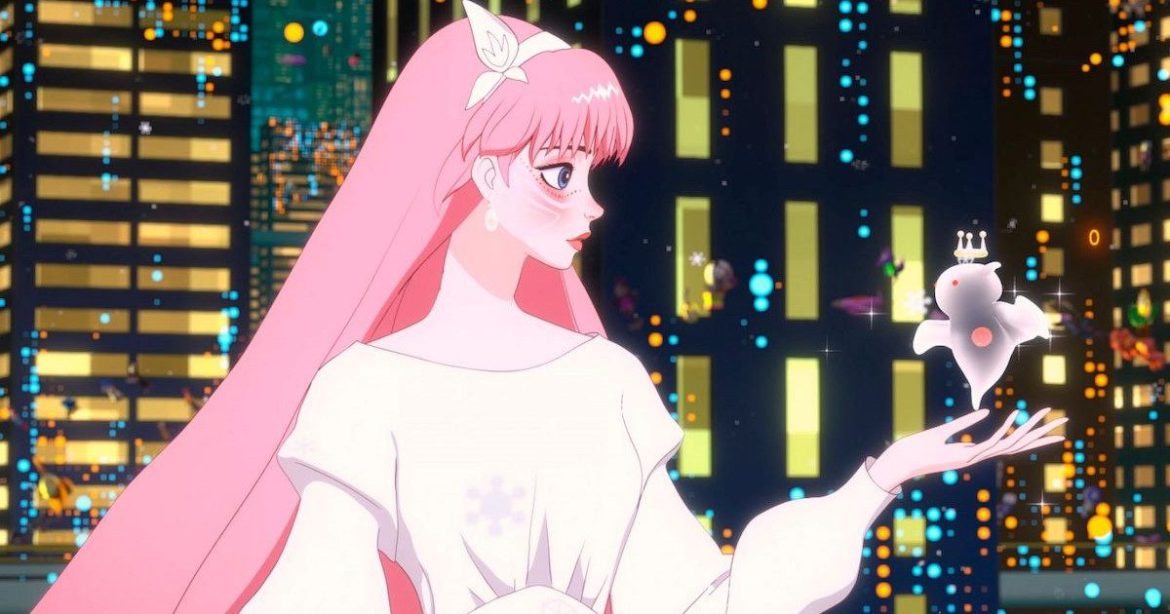 Underneath the surface of most films about online life are commonplace themes about appearances and authenticity: the consequences of anonymity, the rapid spread of misinformation, the ways that social media limits expression of our genuine selves, and the list continues on. The average audience member, however, is far more likely to see these ideas in a more realistic teenage drama, rather than a bombastic Japanese animated feature that opens by first zooming past the streets of a colossal CG-animated virtual-reality metaverse, before then showing a gigantic floating whale with countless speakers on its back, and a pink-haired, freckled popstar in a flower-laden red dress named Belle who’s belting out J-Pop tunes on top of it.

Even so, however, the digitally candy-colored, avatar-populated spectacle of this opening sequence can only represent so much of what’s still to come in Mamoru Hosoda and Studio Chizu’s latest film, Belle, which is — without a single shred of doubt — his most ambitious animated feature to date. Rightly so, too, it seems; in his own words, it’s “the film [he’s] always dreamed of making,” and in looking at Hosoda’s line of work, it becomes clear why he’s making such a definitive claim about his latest project. All throughout his past features, his knack for crafting vivid, melodramatic bildungsromans about early formative experiences has taken on various fantastical permutations. From 2006’s The Girl Who Leapt Through Time to 2018’s Mirai — the latter of which he received a Best Animated Feature Oscar nomination for — nearly every one of his films has focused on children or adolescents on the cusp of maturity, many of which are inspired by his own childhood and family relationships.

Hosoda’s main focus for his latest few features, however, has specifically been on guiding young people through a growingly complex modern world; with Belle, Hosoda, the Studio Chizu team, and their collaborators have brought everything they have in the tank to deliver an ambitious narrative on how one finds their true self, focusing tenfold on the complexities present in our modern online era. Given how fearlessly the film dives into its sprawling thematic and visual territory, there is a prevailing sense of unbalancedness here as it juggles weighty ideas about outward appearances and the like, but its overpoweringly huge scale and emotionality are so profoundly in earnest that it’s incredibly hard not to give in to what it’s trying to achieve. Belle is a film with a beating heart at its core, willing to take risks whenever it pleases, regardless of whether it sticks the landing or not — and there’s something special about its portrayals of human connection, identity, and self-acceptance that makes it worth paying attention to.

As evidenced from the grandiosity of its opening scene, Belle isn’t interested in depicting the workings of the internet exactly as they are; rather, everything about its representation of online life is scaled up to its enormously labyrinthine virtual-reality universe, U — the biggest internet society in history with five billion users and counting. Each user is able to access U through special earpieces, and is given an avatar called an “AS,”  which they can tailor-make to anything they wish it to be.

For high schooler Suzu Naito (Kaho Nakamura), her path to U is one of immense difficulty. Her mother cultivated an interest in music and singing in Suzu when she was young, but after her mother dies trying to save a young girl from a flooding incident, Suzu is profoundly scarred and left with severe abandonment issues, a trauma so great that it even robs her of her ability to sing. (The online world doesn’t respond kindly to her mother’s death, either — anonymous netizens comment on news articles with callous remarks like “she shouldn’t have jumped into that river” and other similarly brash, thoughtless jabs.)

Suzu isn’t necessarily the most popular girl in school — her only close friend is tech nerd Hiroka (Ikura) — but when she enters the world of U as an AS named “Belle,” she regains her voice and starts singing in the middle of U’s virtual cities — an act that almost instantaneously propels her to stardom in U, and eventually places her among the ranks of the virtual world’s most widely renowned pop singers. In the real world, meanwhile, Suzu’s forced to continue hiding her virtual identity in school, with Hiro serving as her manager once Suzu fills only her in on the situation at hand. When Belle’s growing popularity leads to her getting a massive concert performance, however, she’s interrupted by an AS known only as the Dragon (Takeru Satoh), a recluse expert brawler in U whose endangering of Belle’s concert kickstarts a witch hunt by the denizens of U to find out his identity in real-life. Concerned for the Dragon’s safety, Belle sets out to discover who he is on her own, and the ensuing journey leads Suzu through many encounters with U’s most fascinating characters, as well as revelations about her own sense of identity.

All Eyes on U

The unrestrained imagination on display in U is at once a clever stroke of worldbuilding and an impressive reinterpretation of life on the internet, as Hosoda seems to be fully aware of the fact that popularity, anonymity, and other such online phenomena are not likely to fade away even as technological developments continue to arise. For one, even amidst the slew of Studio Chizu’s creative AS designs and creatures found throughout U’s deeply fantastical, breathtakingly gargantuan, and indulgently digitalized backdrops — most flashy among them being the Ultraman-like administrators of U known as the Justices, who can unveil the real-world appearances and locations of miscreant users at will — there are moments where the negative facets of U ring rather true to how modern social media platforms function.

Take Belle’s rise to popularity, which is initially marked with users pointing out the tiniest flaws in her singing in various comment threads, with fans of a rival pop star patronizingly quipping that she should “relearn the basics” of singing. Meanwhile, the wild goose chase that the people of U embark on to discover the Dragon’s true identity leads them to a variety of suspects, each of whom are viciously harassed and, in some cases, forced to uncover deeply personal parts of their lives in order to throw people off of their trail — which isn’t even to mention the immense harm their fanatical doxxing campaign begins to do to the Dragon himself.

But it’s worth pointing out here that Hosoda isn’t interested in dwelling on the internet as a place of constant turmoil, even as he acknowledges its incredibly tangible capacity for harm. If the optimism of his previous work is anything to go off of, Belle, too, sets out to send a message of hope and compassion, highlighting the ways in which the online era’s connectedness is also a driver for bringing people together: a means for us to find and help each other in ways we couldn’t otherwise. And while this is a ‘Beauty and the Beast’ reimagining set in a vast digital world, the real-life world portrayed here is barely even a far stretch from our own, bringing its commentary on authentic selves into both the symmetrical CG-crafted Inception-like spaces of U and a more identifiable hand-drawn, real world reminiscent of our own present day.

The moments in which Belle tries to connect with the Dragon, in particular, are preceded by gorgeously textured virtual backdrops drawn by both Studio Chizu and Cartoon Saloon (the Irish Oscar-nominated studio behind Wolfwalkers and The Breadwinner), before revealing the lavish yet desolate palace in which the Dragon resides — the eventual setting for Belle‘s spectacularly digitalized rendition of the trademark ballroom scene from Disney’s two versions of the story (also complete with a sweeping J-Pop ballad that she sings the whole way through). Meanwhile, Suzu’s relationships with various people from her high school — among them being childhood sweetheart Shinjiro (Shôta Sometani), popular girl Ruka (Tina Tamashiro), and enthusiastic canoeist Shinobu (Ryô Narita) — often play into somewhat twee, typical expectations of a generic high school flick here and there, but there are also just as many moments filled with surprising doses of emotional authenticity as their true selves slowly begin to show. (Watch out for a particularly amazing encounter at the entrance of a train station; without a doubt, it’s one of the film’s best and most honest moments.)

Perhaps, then — especially with all of this promise in mind — it comes as a bit of a shame that Belle is far too unwieldy for its own good. For all of its ideas about the trappings and blessings of online life, as well as our universal need to look past outward appearances both in virtual and real-life spaces, it’s only ever able to cover a handful of them in truly substantial detail. For one, it takes a bit too much time for Suzu’s interactions with her real-life friends and fellow students to develop into anything meaningful after her main conflicts with both the Dragon and her growing popularity as Belle have been established in U, and by the time the film reaches its climax, any potential for further growth between these characters and their increasingly complex personalities is stifled to make room for new, ostensibly stirring narrative developments to take their place. Even in the virtual world, too, the ways through which Belle tries to bond and empathize with the Dragon feel so half-baked that the seemingly towering emotionality of their blooming connection doesn’t fully resonate, even if one is likely to understand what exactly it wants to achieve.

And part of that feels inevitable; even towards the end of the film, Belle is still busy incorporating new dimensions into its characters and situations, in major part thanks to its genuinely unrestrained sense of thematic, technical, and narrative ambition. It’s worth reiterating that in terms of its craft, that ambition is an undeniable positive — very few animated films from this year have the incredibly distinct sense of visual identity and maximalism that Belle has, and the contrast between the symmetric, colossal scope of U against the more identifiable, intimate present-day spaces of the real world remains well-balanced. But on a narrative level, it leads to a story that, while boldly hitting all of its intended emotional beats with incredibly stunning confidence and spectacle, stumbles to those individual moments with slightly off-kilter pacing and somewhat insufficient development.

To claim that Belle merely lands a few of its shots, however, would be underselling it immensely. As much as its boldness might work to its detriment in some places, it also gives the film the authenticity and optimism it needs to get its message across — in particular, its earnest plea for us to sincerely hear, empathize with, and understand others in an online world where doing just the opposite has never been easier.

Thank you for reading! What are your thoughts on Belle? Comment down below!