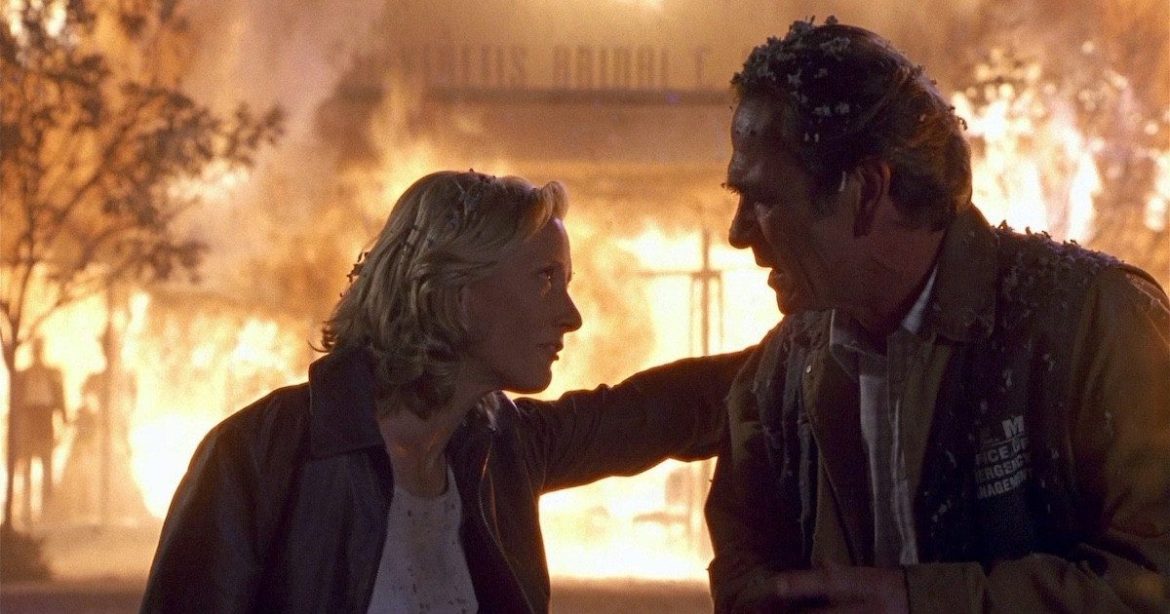 Volcanoes are probably my worst fear. I watched Dante’s Peak and was scared, so I don’t know why I was so eager to jump into Volcano. I had no need to worry though, as Volcano was about the most ridiculous movie I had ever seen.

While the movie tried to rein in some science to explain what was happening, it ended up throwing it all to the wind by the end. Who needs science when you can just explode a building?

By far, my favorite line of this entire movie was spoken by Emergency Management department head Mike Roark (Tommy Lee Jones). Dr. Amy Barnes (Anne Heche), a scientist, is trying to gently explain that a volcano somehow developed overnight under the city’s mass transit system and that the resulting magma could cause the deaths of thousands. Roark, with his vast knowledge that he would have in his high position, asks this thought-provoking question: “What’s magma?”

Apparently, Roark grew up in a small town where basic science wasn’t taught. No, that subject was switched out for more useful subjects like knowledge of road construction.

At that point, Dr. Barnes’ colleague, Rachel (Laurie Lathem) probably knew she would have to die a few scenes later because she could no longer be in the presence of such a stupid man. What’s magma???

In this absurd ripoff of Rock, Paper, Scissors, concrete conquers lava. Roark uses his knowledge of road construction equipment to set up a concrete barrier to keep the lava from advancing any further down the street. Somehow, this works, despite obvious cracks in the concrete barrier and the fact that the lava should have just eaten the concrete up.

Then, Roark instructs the city’s firefighters to spray the lava with their high-powered hoses. Of course, this works somehow in Hollywood but do you know what would have happened in real life? Nothing, except the water, would be vaporized by the extreme heat of the lava. And all the people surrounding the lava would be dead because of the extreme heat. Everyone should be dead.

I really think Rachel knew what she was doing when she fell to her death.

One thing I retained from Dante’s Peak was that all the ash in the air would have made it impossible for the helicopters to be flying around. It would have clogged up their engines and they all would have plummeted to the ground. At least try to make it realistic!

Speaking of ash, where did it all come from? The volcano that sprouted up like some sort of persistent dandelion was spewing a lot of lava. Volcanoes that spew lava like that don’t produce that amount of ash. Think of the volcanoes of Hawaii — not a lot of ash. This is one freak volcano!

Returning to the helicopters, they should have been destroyed as soon as they went anywhere close to that lava. The heat would have been far too much for them to handle and they would have fallen into the lava. But the power of Tommy Lee Jones saved them.

“Baby” and Other Corny Lines

This isn’t necessarily an accuracy issue but I love how much they tried to emphasize that Roark did indeed love his daughter. Almost every sentence he speaks to her ends in “baby” and it’s absolutely awful. There are times where it seems like he almost forgets to call her “baby” and so he has to quickly throw it in at the end.

When Roark’s daughter, Kelly (Gaby Hoffmann), is at Cedars-Sinai, she is put in charge of a little boy whose mother is dying or something (maybe if she had had a hose, she could’ve stopped the lava from getting to her). I’ll admit that the little boy is actually pretty cute and I was halfway rooting for him to take over the film and save the day. But then the little boy wanders off to do God knows what and Kelly has to search for him. Meanwhile, Roark has decided to blow up a building to stop the lava, as any red-blooded American would. To sum up, Roark has to save Kelly and the random kid and they all live happily ever after.

As the boy is being carried away to find his mother, he tells the man holding him, “Look at their faces. They all look the same.” He is referring to the survivors of the freak volcano incident, their faces covered in ash. It wouldn’t be a worthwhile movie unless someone made an offhand comment about racism. These are Crash-levels of anti-racism.

This may be the realistic part of Volcano in that everyone in LA just moves on with their lives despite the fact that there’s an active volcano in the middle of their city. The same way that earthquakes are just another commonplace hazard for Californians, this deadly volcano spewing lava is just another obstacle to the daily commute.

Then again, is it really that much of a hazard if you can just pour a bunch of water on the lava and contain it with concrete stacked together?

Thank you for reading! What are your thoughts on Volcano? Comment down below!

Satan – “And this is the lake of lava you’ll spend eternity in”
Guy – “Actually as we’re underground, it’s called magma”
Satan – “You realise this is exactly why you’re here, right?”

Only slightly related but it’s a top joke.

‘Sonic the Hedgehog’ Runs on Empty