‘Dante’s Peak’ Scared the Crap Out of Me

Natural disaster movies are anxiety-inducing and I can't believe I watched this. 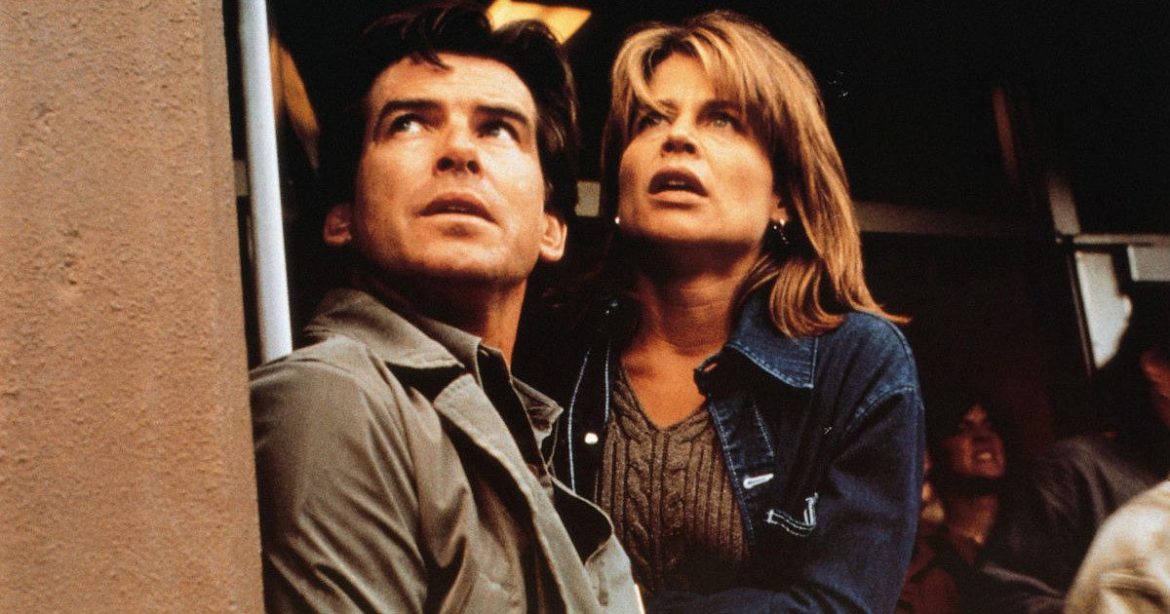 One of my biggest fears is volcanoes and Dante’s Peak accentuates that fact. This is generally pretty irrational, considering I live in the Intermountain West (don’t bring up Yellowstone), yet the fear has persisted my entire life. My ultimate survival plan should I be caught in a volcanic eruption is to simply curl up and die.

Watching Dante’s Peak was a bad idea for me. I was terrified the whole time and not even Pierce Brosnan’s charming smile could stop that. There was ash and lava and boiling water and acid lakes and all of it was horrifying.

The following is a personal list of the most terrifying moments.

I’ve lived through one earthquake in my life. It was minor, but it was enough to make me question every slight tremble I’ve felt for the last two years. The earthquakes that preceded Dante’s Peak erupting were a lot larger and more terrifying. These earthquakes did more than just shake the windows a bit. They knocked over buildings and furniture and caused rifts in the Earth’s surface. These bad boys could’ve created a hole in the Earth to swallow up half the town.

To compound just how scary this was, the whole town was gathered in one tiny high school gym when this happened. Once the first jolt hit, people panicked and started running for the exits in a not-so-orderly fashion, despite Harry Dalton’s (Pierce Brosnan) repeated pleas. One man is almost trampled to death in the chaos. It’s a claustrophobic mess and only compounds the fear of the audience.

The realism of the panic was almost too much for me. My whole body tensed up and I felt like I was cramming through the small gym doors along with the rest of Dante’s Peak. Definitely not an experience I’d ever want to go through in real life. Not a big fan of running for my life while being crushed by dozens of other people doing the same thing.

The scene where the group has to cross an acidic lake is horrifying. What compounds this feeling is when Grandma Ruth decides that she is just going to jump in said lake for a little swim. The volcanic eruption just didn’t seem to be happening in her mind. I’m sure her grandchildren will forget her screams one day after years of therapy.

The most anxious I was during Dante’s Peak was when the group had to take a tiny metal boat across the lake while it melted away underneath them. One wrong move could have sent all of them to a searing, painful demise and the only thing preventing that was a paper-thin piece of metal. Maybe that’s why Grandma jumped in — just to get it over with.

The only thing keeping me from totally losing my cool at this scene was realizing how unrealistic it was. Dalton wraps his hand in a jacket to prevent getting the acid splashed on his skin, but by the time they get to the other side of the lake, the jacket is soaking. Yet, his hand was perfectly fine. And this lake can supposedly chew through a metal boat but it only burned Grandma Ruth’s skin, not even melting through to the bone or anything. Grandma Ruth is truly a modern marvel.

One of the scariest things about volcanoes to me are the ash clouds that completely block out the sun. Even in the middle of the day, it’ll be pitch black. That aspect brought a level of terror that nearly made me turn the movie off altogether. Not only were Dalton and Mayor Wando (Linda Hamilton) and her children fighting through the terror that is extremely hot lava and flying debris, they were also doing it in the suffocating cover of dark.

The woods are already a spooky place in the daytime, but at night they are downright scary. Add in the impending threat of fiery, painful death and you have a recipe for a great time in the woods! The occasional dead animal just adds to the ambiance. During a volcanic eruption just isn’t the time to go out into nature.

The darkness only gets worse when the group is forced to take shelter in the abandoned mine. Not only is it dark, but it’s also suffocating and you could get trapped in there for good. There’s even a partial cave-in at one point that nearly dooms their chances of survival. Honestly, at this point, I would have just jumped in the acid lake and called it a day.

Oh, wait, no. That’s Jeremy Foley. What a jump scare.

I feel like lava is made out to be a bigger problem than it is in our society. “The Floor is Lava” is such a prevalent song among children, and yet I’ve never had this problem. If the floor really is lava, you’d be burned just by being so close to it. But, I digress.

One of the scariest parts of the whole movie is when Dalton is driving the family over lava in his shoddy pickup truck. Of course, this is unrealistic as the lava would have completely destroyed the car upon impact. Still, it’s a visually unnerving scene that got my adrenaline going. The knowledge that the truck could stall in the middle of the lava bed at any time was terrifying. What would they do then?

And then the fact that their missing dog was found just hanging out in the middle of all the lava? Absolutely unbelievable. To be honest, I would have left the dog at that point. The only thing I’d be thinking about is getting away from the super-heated rock that was trying to kill me.

Thank you for reading! What are your thoughts on Dante’s Peak? Comment down below!

I will NOT thank you lol

‘Panic Room’: Anxiety and Isolation Are as Real...

‘Tin Cup’ Is a Cut Above the Rest