On May 2nd, YouTube Red will release Cobra Kai, a spin-off series based on the famous dojo in The Karate Kid. Just like every other franchise or production company monopoly nowadays, this franchise decided it couldn’t just let a good thing rest. Maybe I’m judging it too rashly. You make your own decision:

Just as cheesy as you thought it would be, right? Yet, hopefully just as matchless as the movie it stems from, with all the badass karate moves and teen awkwardness and fights that made it so great.

In case you’ve forgotten just how awesome/corny the original Karate Kid was, let me refresh your memory.

(Is it really necessary to use a spoiler alert for movie that’s over 30-years-old?  Probably not, but someone will find a way to complain.)

Daniel LaRusso (Macchio) moves to Los Angeles with his mother. Already perturbed by the move, he deals with school bullies and a budding teen romance with Ali (Shue). To avoid getting his butt kicked everyday, he makes a deal with the strange maintenance man at his apartment, Mr. Miyagi (Morita), who agrees to teach Daniel — Daniel-san, to Miyagi — karate so he can win a tournament against the lead bully, Johnny (Zabka). After a frustrating start with Mr. Miyagi, Daniel finally masters the art of karate. With Miyagi-finesse, he uses the famous “crane kick” to kick the bully’s butt in the final round of the tournament.

I think part of what makes me like this movie so much is what an underdog it is. At the time, none of the actors were big stars (except Pat Morita, who played the humorous owner of Arnold’s on Happy Days). Ralph Macchio was not a household name and Elisabeth Shue had not yet starred alongside Nicolas Cage in Leaving Las Vegas (1995). But this movie proclaimed their names to America.

It was a surprise blockbuster, grossing $91 million, an amazing feat in 1984 when tickets weren’t even $5 each. It made Ralph Macchio (who was twenty-two when he played teenage Daniel LaRusso) a big star and spawned three sequels and one remake. 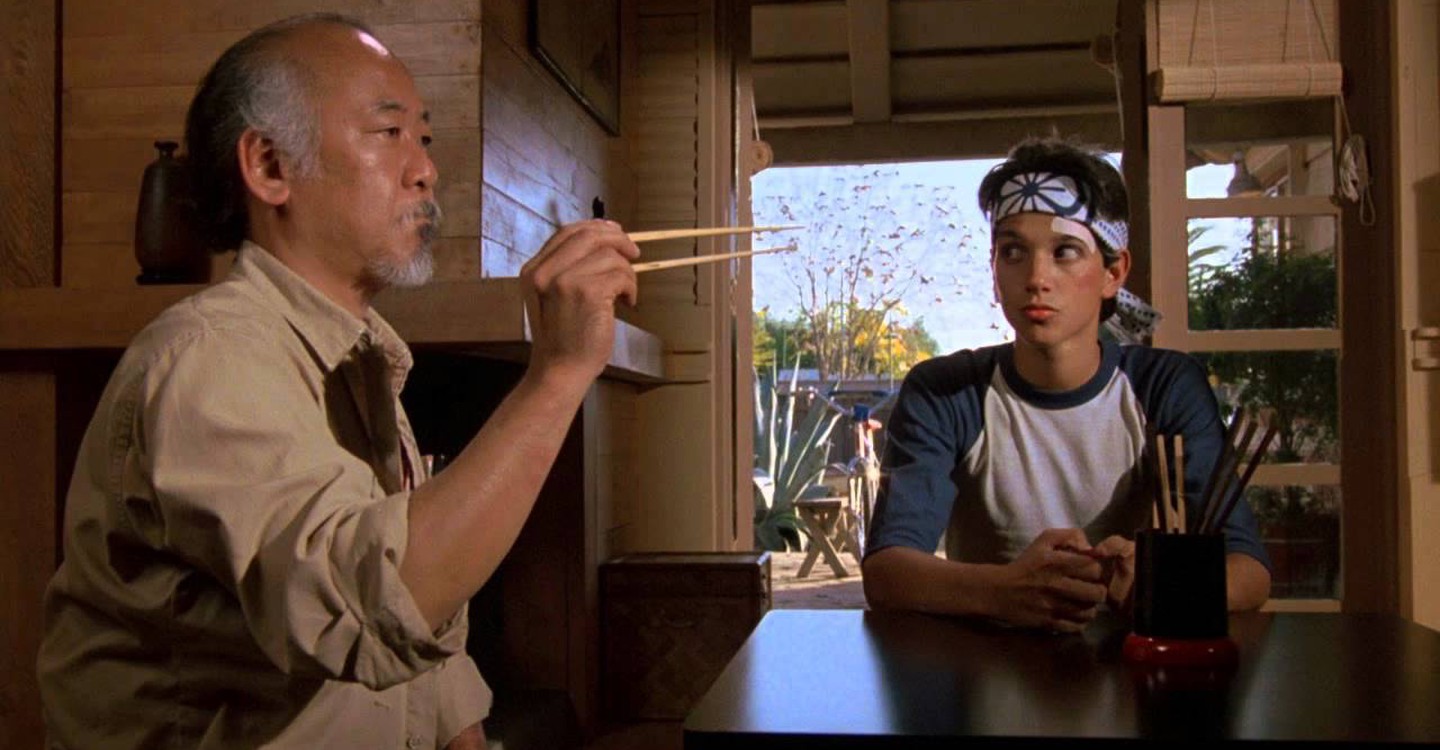 Not only that, but it made karate way more popular. As screenwriter Robert Mark Kamen has said, dojo before The Karate Kid were very serious — the goal wasn’t getting different colored belts but rather mastering the art. It wasn’t until after the movie came out that karate exploded to its modern-day popularity. Ironically, after it gained popularity, it became mainly about the belts and less about mastering the art (Mr. Miyagi would be ashamed).

“Man who catch fly with chopstick accomplish anything.”

While maybe not the most quotable movie of the eighties, it sure has some unbeatable lines. And some of the most iconic scenes — specifically the crane kick training scene at the beach — have been spoofed in famous movies, like Hercules (1997), Wayne’s World 2 (1993), and Jingle All the Way (1996). 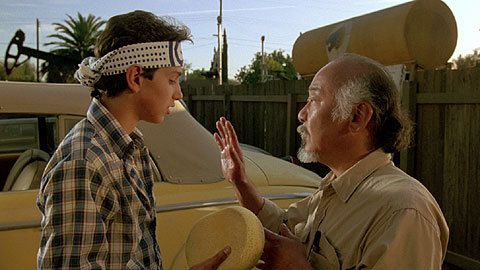 Every time I hear any part of this soundtrack, I’m instantly transported thirty years back in time to a quaint suburban community, riding my neon-colored bike in unnecessarily high-waisted jeans and a frizzy perm. Sometimes I’m on my way to learn karate, other times I’m on my way to Top Gun to buzz the tower or to detention at Shermer High School. That’s just how eighties this soundtrack is.

The most iconic track is possibly “You’re The Best” by Joe “Bean” Esposito. It goes perfect with the whole Rocky-but-with-karate theme and it makes for excellent training montage music.

The soundtrack also includes “The Moment of Truth” by Survivor and a ton of one-hit wonders like “(Bop Bop) On The Beach” and “Feel The Night.” And, of course, every song is rife with biting guitar riffs and psychedelic synthesizer to make you want to headbang and jump around at the school dance.

Some movies take too long to get to the point. They add unnecessary exposition, assuming their audience really cares (*cough* Marvel *cough*). Others are way too short and just jump straight into the action.

The Karate Kid masters the pacing and makes sure to never stray too far toward one extreme. We get adequate backstory on who Daniel is, what he wants to do, and his aspirations as an easygoing teenager. It doesn’t linger too much on the romance, and it doesn’t linger too long on the action. It mixes the two elements well and makes sure you’re never bored or uninformed.

The Karate Kid is not flawless. It suffers from two main problems, the first being that Daniel never stops talking. As soon as he meets Mr. Miyagi, he’s  asking questions about his Bonsai trees and what he’s doing and how does he know he’s doing it right and hey can you fix my sink?

Calm down, Daniel. Even though I realize the director was trying to make him just like an ordinary kid, no ordinary kid would ask that many questions all at once.

Obviously, I’m exaggerating, but this movie did have some cheesy acting. Not only Daniel with his endless questions and suave pickup lines, but the antagonists were pretty two-dimensional with their dialogue. They only existed to beat the crap out of Daniel with no real purpose other than they were part of Cobra Kai and exacted no mercy. The most intelligent line spoken by one of the bullies is when he sees Daniel and Ali walking to class together: “Must be ‘Take a Worm for a Walk’ week!” Image via That Moment In

The Karate Kid earns a lot of brownie points purely from nostalgia. It provides a picturesque depiction of the eighties and its lovable, overused trope about the redemption of the little guy. However, like a lot of movies from this time, it groans under the weight of its bad dialogue and flimsy villains. Yet, still a great film for a movie night and an eighties classic!

Thanks for reading!  What are your thoughts on The Karate Kid?  Comment down below!

Director John Avildsen did a fantastic job, with low budget and unknown actors he made Karate Kid a landmark of the 80’s. For KK2 and KK3 he had a different vision (specially KK3) but never happened. I read his book “The Films of John Avildsen” for a marketing course at University and wrote a blog about it. I was fascinated with the fact that he spent 45 days in SFV filming KK1 and yet it was a major hit. Even today fans still visit the filming sites.

It is a landmark of the 80’s. John Avildsen did an amazing job with low budget and unknown actors. In my opinion if Sue had been part of KK 2, the franchise would have been even more popular. Between Ralph, Pat and Sue KK1 conquered the audience. Then KK2 erased Sue in less than 30 seconds (a short dialogue between Ralph and Pat). By the time KK3 came to life the audience had distanced themselves due to lack of roots. KK1 was (and is) such a hit that even today fans still visiting the sites in San Fernando Valley where John filmed Ali’s house, Daniel’s apt, the beach, the karate tournament and so on. I wrote a blog on wordpress during a marketing and branding course at University after reading “The Films of John Avildsen”. John actually said that was not his choice to take Sue out of KK2. It was Producers financing issues. In KK3 John had a completely different vision for the movie but again, Producers thought that would be “too expensive”, so what he really want for KK3 never happened.

I hate when producers and directors conflict on creative ideas, especially when the director loses. I didn’t know all that though! Thanks for commenting!

Love The Karate Kid! It’s a classic. I wasn’t too crazy about the sequels, and I know people will disagree with me, but I actually did enjoy the remake with Jaden Smith.

I’m not too crazy about this TV series. I think that it sounds dumb. I saw the trailer, and it seems very cheesy and a way for the franchise to make more money.

Producers, Writers, and Directors need to come up with new ideas instead of rustling up the past all the time.

Agree on basically everything, though I’ll probably still watch the new series–just for nostalgia reasons. I enjoyed the remake too! It didn’t completely remake the original, so it was actually pretty good.

Awesome review! Forever a classic, especially on those, “What do I watch?” kind of days.

Great review! This is a favorite of mine. So many childhood memories. Looking forward to watching Cobra Kai with my son and seeing this story pass to a new generation.