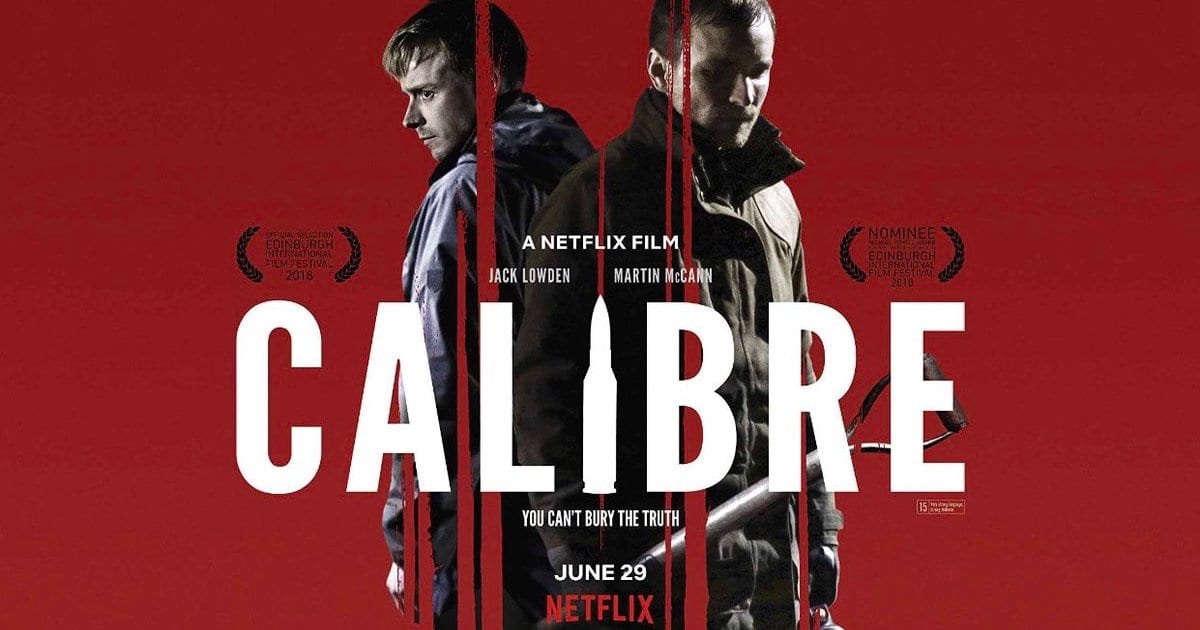 Calibre (2018) follows the fate of vacationing hunters, and arrives this summer amid a steady flow of independent films on the festival circuit that find their way into the Netflix fold.  This English language production hails from the land of Great Britain.  It’s sporting a capable cast and a crew that appears to be serious about the task at hand.  Presumably made on a limited budget, it’s a relatively minimalist drama clocking  in at 101 minutes from stem to stern.

Lifelong friends Vaughn (Lowden) and Marcus (McCann) drive out of Edinburgh up to the Scotland highlands for a weekend hunting trip.  Although not avid hunters, they venture out in an attempt to get away from it all.  Marcus is familiar with the area, having hunted there with his father as a child.  In stark contrast to the wide-open wilderness, what they encounter is a claustrophobic environment inhabited by close-knit locals who monitor their every move.  It becomes apparent that they’re far from escaping, they’ve only just carried their troubles along with them.  Trouble which keeps them company as they head towards the impending consequences of their past decisions.

Vaughn has left a pregnant fiancé behind while Marcus seems to be trying to come to terms with his reckless past.  He also feigns a desire to prepare for the inevitable change in his relationship with Vaughn, whom he has been somewhat domineering towards and overprotective of, at level that approaches something short of psychologically unhealthy.

A report indicated that work on the film began in 2009 and filming commenced in November of 2016.

Calibre premiered at the Edinburgh International Film Festival on June 22nd, 2018. The film was released worldwide on June 29th, 2018 by Netflix.

Jack Lowden appeared in the cast of The TV miniseries War and Peace (2016) and Tommy’s Honour (2016).  Both Lowden and Martin McCann had parts in the British period peace ’71 (2014), a film about riots in Northern Ireland at the time.  Here’s a bit of a warning: the movie is better than the trailer in my opinion.  It’s not exactly spoiler free either.

Cinematographer Márk Györi is the driving force behind Calibre.  With a lush mixture of color and vibrant lighting, you’re left with the impression of overwhelming beauty.  Director Matt Palmer is careful to balance those images with slowly moving shots, causing the scenery to brood more than sparkle.  This gives everything a foreboding feel, as if this stark countryside is as deadly as it is breathtaking.  The opening panoramic aerial shot of vast forestland quickly establishes the mood of a cold, sparse, wild and all-encompassing landscape that influences everything imaginable.  It screams ‘you’re trapped’, to any mortal soul inside it.

While the pace isn’t exactly slow, it is deliberate enough that you find yourself considering the majesty of the architecture.  It’s little wonder that the harsh northern weather conditions demand durable construction, however the quality interiors displayed in the lodge where Vaughn and Marcus stay are in full view, and is well able to be appreciated by the audience, if not the characters themselves.  It speaks to a place whose inhabitants have painstakingly cared for it, and now betray their fragile emotional psyches, the result of an economic downturn that has put their life’s work in jeopardy.

Welcome to the Scottish Highlands

I’ve never been to Scotland, and I know it’s just a movie, but by the looks of Calibre Matt Palmer would have you believe that the rural highlands are full of people with a love-hate relationship with any so-called outsiders.  Imagine an idyll, suspended in time from a long ago age, whose residents resent on the one hand the idea of needing your economic investment, and even more so your very presence among them. Soon after arriving, they learn they’re the only hunters around, and you find yourself understanding why, given the less than cosy reception. 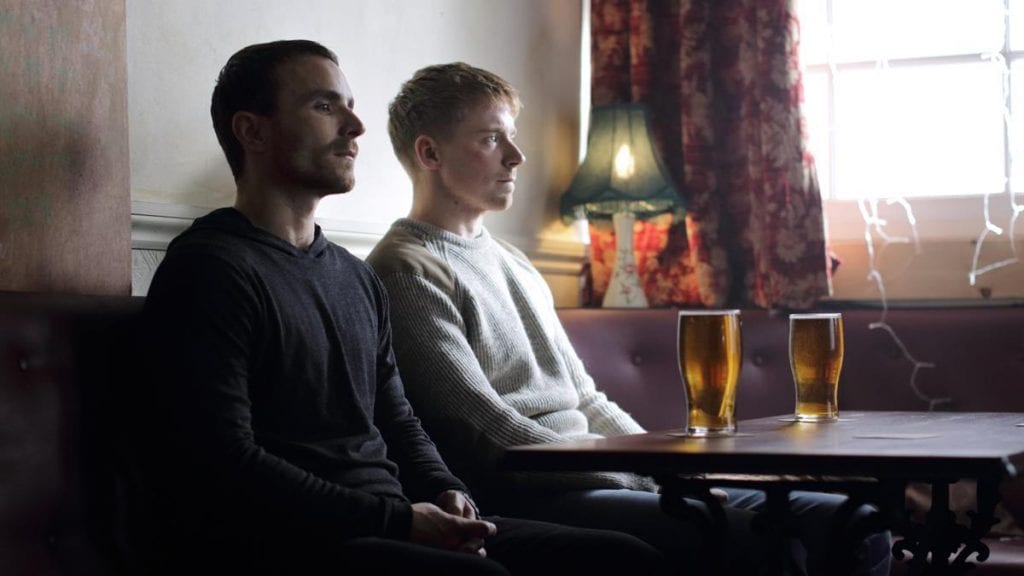 What the filmmakers do well is create and maintain tension.  They don’t just rely on the actors to provide all of it either.  Though they are quite good themselves.  Every person on-screen adeptly shows off nuanced body language, eye contact and tone of voice to communicate the mood.  Palmer sets the camera angles to capture just the right gesture and facial expression.  While what we do see is filtered in a haze.

One Striking Scene After Another

One scene that best describes the feel for me was cast in a bright day lit pub view.  Its full of earth tones, and warm hues, yet clouded and unfocused just enough that you sense something bad is waiting around the corner.  Marcus and Vaughn are perched in a booth, having had a cautionary run in or two with some folks.  The scene involves a forced apology, that turns out to be anything but.  I found myself looking at Marcus and Vaughn, dreading the encounter, thinking I wanted to be anyone but them, even though they were on the receiving end of the apology.

The tension builds ominously towards the climax.  The actors deserve much of the credit here.  Vaughn’s character is particularly well written.  And Jack Lowden proves more than capable at communicating his pathos.  Martin McCann does very well in an important role too.  He has to be convincing for the story to work.  You see him as the best friend who is incessantly trying so hard to help yet ends up only mucking it up.

Hunters Doing Anything But

The friendly hunters spend much of their time doing anything but hunting.  You begin to think it’s a wild binge party disguised as a hunting trip.  Either way, as the characters discover why they might be there in the first place, we see what’s really going to happen with them.  Billed as a thriller, this movie offers to show you the external challenges that set in to motion primal human behavior.  However, to my surprise there is much more going on inside the minds of the protagonists that creates the most thrilling aspects of Calibre.

Although the writing is quite good, sometimes I wish there were more.  The director at times seems left wanting by the screenwriter.  Palmer shot some of the scenes, often with little or no dialogue, in a way that just goes on with moving the plot forward.  Palmer in particular shows Vaughn and Marcus dressing, and all he reveals by showing all that activity… is how they dress!

I couldn’t help wondering if budget constraints caused the director to just film something, anything to fill out the reel.  Had he written another scene between Vaughn and a local girl Iona (Kate Bracken) or Marcus and Iona’s companion Kara (Kitty Lovett) he would have added to the story and given us something to look at besides a wardrobe change.  Clearly Palmer hints at enough shenanigans between Marcus and Kara to choose from.  But I would have preferred seeing more of Vaughn and Iona.  If for no other reason than Kate Bracken resembled Rachel McAdams.

Calibre is certain to anger a few viewers and disturb others.  However, Matt Palmer designed it to get a reaction from you.  So if you’re attracted to the kind of film that tugs and your emotions, you might enjoy it.  I don’t think it’s for everyone.  It’s rated TV-MA and I’d keep it away from the kids.  Calibre will be memorable for most.  It leaves an impression, either through its story, searing visuals, or the intensity of its emotional impact.  You may or may not like hunters and hunting, but you probably will think differently about heading to the hills for the weekend after Calibre. 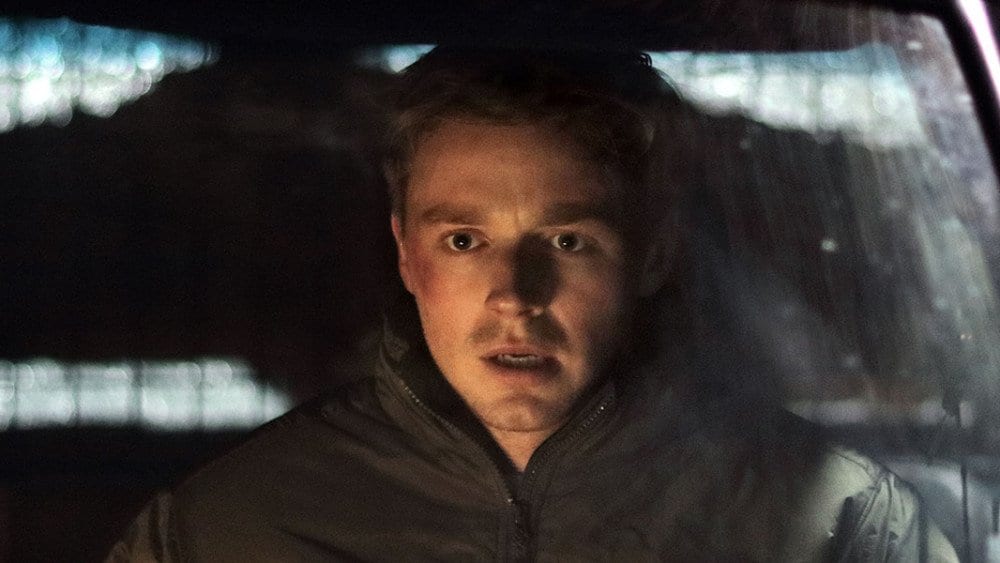