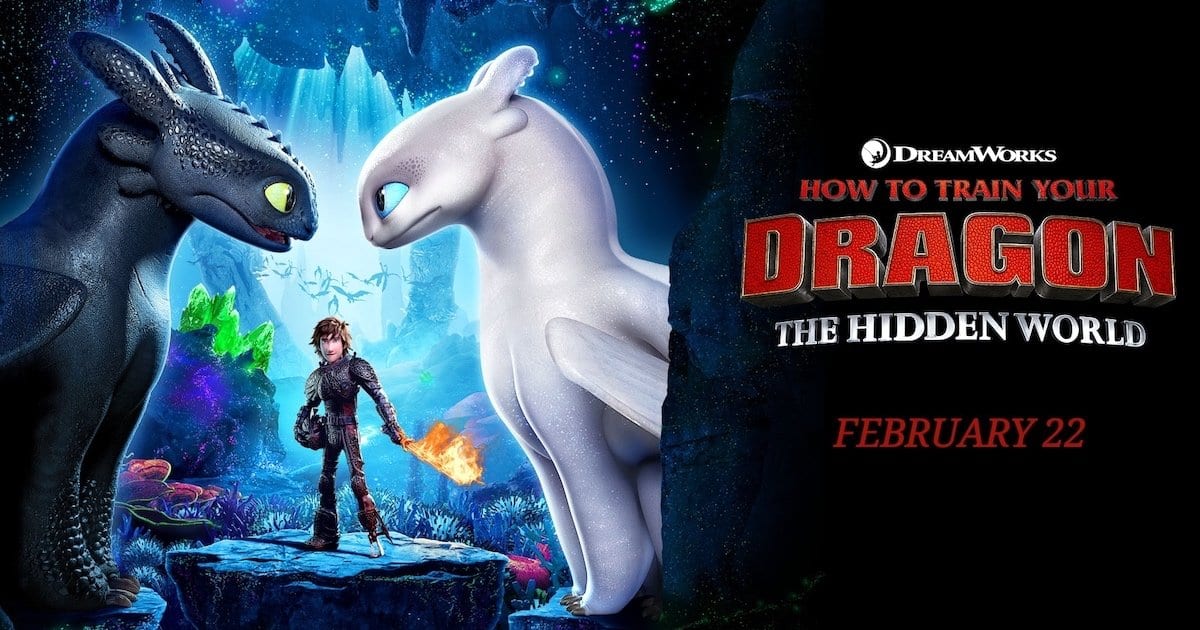 It can be very frustrating as a die-hard film fan living in Australia. Distribution in the land down under is all over place and waiting for films you desperately want to see requires a lot of patience. Films like Sorry To Bother You and Eighth Grade took over 4 months to hit Aussie cinemas, while First Reformed went straight to DVD and Digital and Blindspotting STILL does not have a scheduled Australian release date, theatrically or on home formats. As you’d expect, despite the rates dwindling in the past few years, film piracy in Australia is rampant.

But every now and then, Australia will release a film early that will get people off torrent sites and into the multiplex. And when it was announced that we would be the first country to get How to Train Your Dragon: The Hidden World, a whole seven weeks before its U.S. release, it almost made up for all those times we’ve had to wait so long.

For once, the rest of the world had to wait.

Written By: Dean DeBlois and Cressida Cowell (Based on the Books By)

Taking place roughly one year after its predecessor, The Hidden World sees Hiccup (Baruchel), Toothless and the gang face a new threat to the people and Dragons of Berk in the form of obsessed dragon hunter, Grimmel the Grisley (Abraham). But when Hiccup discovers that Toothless is not the last of his kind, he goes searching for a mythical secret dragon utopia at the edge of the earth known as ‘The Hidden World’ to save his dragons and his people.

After almost 10 years, 3 feature films, 4 television specials and 118 episodes across two different television series, the How To Train Your Dragon Franchise must sadly bid us farewell. The Hidden World was originally scheduled to be released in June 2018, but was pushed back due to Universal Picture’s acquisition of Dreamworks from 20th Century Fox. Therefore, instead of being Dreamworks’ last animated feature under Fox as originally planned, it is their first under Universal.

Though often largely overshadowed by animation colossus Pixar, Dreamworks have always been at the forefront of cutting edge computer animation and this series has showcased why. The Dragons films look better and better with each instalment and The Hidden World is no exception.

Just like its predecessors, this film is just brimming with visual creativity and incredible attention to detail that flies off the screen, whether you see it in 3D or not. The environments especially look as if they were shot on location. The splashing of water, the parting of sand, the drifting of clouds, the rustling of trees and the smokiness of the flames are all life-like and a feast for the eyes.

These photorealistic backdrops have made for the perfect settings of the exhilarating flight sequences and Dragon action these films are known for and The Hidden World contains some of the best in the trilogy. It is no surprise this trilogy is so visually stunning when thousands of talented animators and artists, designers are involved, as well as the photographic wizardry of master cinematographer, Roger Deakins as a visual consultant on all three films.

Hiccup has been a very strong protagonist that has matured and evolved with each film in the series. He has gone from the laughing stock/scapegoat of the village, to a legendary dragon rider and chief of Berk. He continues to evolve in The Hidden World as Hiccup faces the struggles and responsibilities of leadership at such a young age without the guidance of his father.

Jay Baruchel’s vocal performance as Hiccup has also evolved with the character. He still brings his trademark nervous energy and dry sarcasm to Hiccup, but where he really shines is in the more dramatic and heartfelt moments towards the film’s finale. Hiccup’s relationship and connection with Toothless, the emotional core and beating heart of this trilogy, remains emotionally rich and palpable, but is put to the test when the white scaled, blue-eyed ‘Light Fury’ enters the picture.

Image via Den Of Geek

One of the few low points of this series is the supporting characters as I’ve always found them annoying. Unfortunately, the supporting characters are still hit and miss. Hiccup’s friends still aren’t very interesting and still deliver the same one-note jokes from the previous films. Some of them get more screen time and have a little more agency in The Hidden World (especially the twins), but with the exception of Astrid, their characters and personalities have barely changed since the original.

Hiccup’s mother Valka, a really intriguing and interesting character introduced in the previous film, is completely diminished here. She takes a backseat for most of the action and is mostly the subject of a lame running gag where one of Hiccup’s friends is convinced that she’s in love with him. It felt like a waste of both a compelling character and the voice talent of the marvellous Cate Blanchett.

As the for villain, thankfully they introduce a new character instead of bringing back Drago Bludvist from the second film as originally planned. Not because Bludvist was a bad villain, but because creating new villains is better than repeating old ones. The tall, slender, white-haired Grimmel has quite a basic and one-dimensional motivation and uses a barely defined serum to control the capture and control the dragons. However, F. Murray Abraham brings gravitas and menace to his voice performance to convey that Grimmel is a credible threat to the people and Dragons of Berk and is a force to be reckoned with. The design of Grimmel also looks hilariously like if Terrence Stamp was drawn into a Hotel Transylvania film.

The Dragons films have drawn number of comparisons to the original Star Wars trilogy, especially in how the second film tackled darker and more mature subjects, similar to The Empire Strikes Back. The Hidden World continues this trend. Those darker and mature themes are still present, but goes for a much more light-hearted tone with more interactions with cute creatures, much like Return of the Jedi with the Ewoks.

This lesser focus on themes of loss, sacrifice and the burden of responsibility means more time for adorable, humorous scenes between Toothless and the Light Fury. As a result, The Hidden World is much more palatable for younger children and is the film in the Dragons trilogy that is geared mostly towards kids. Though overly cutesy, these interactions with the Dragons are flowing with charm and humor, especially Toothless’ performance of a bizarre mating dance. The complete absence of dialogue in these sequences allows the film to show off its beautiful animation and John Powell’s magnificent score.

However, when the film explores these more mature themes, they hit home hard. Most notably in the film’s emotional finale. Bring tissues if you’ve been a big fan of this series, because you will be a sobbing, blubbering mess by the time those credits roll. This series goes out on a real high note and could not have had a better ending.

Though probably the weakest film in the series, How To Train Your Dragon: The Hidden World has everything you’ve loved about the franchise: the glorious animation, the breathtaking flight and action sequences, the heartfelt emotion and the strong bond of the inseparable Hiccup and Toothless.

The story is a bit familiar, the supporting characters and villain are still a little one-note and it focuses on a lighter, more child-friendly tone, yet it does not diminish the more mature themes when they are explored. How To Train Your Dragon: The Hidden World is a very good third entry and the perfect conclusion to what has been a truly epic trilogy.

Thanks for reading! What are your thoughts on How To Train Your Dragon: The Hidden World? Comment down below!

[…] insanely profitable at the box office ($752 million worldwide against a $165 million budget), but Dreamworks and Paramount decided not to continue forward for a fifth film and shift towards spin-offs with […]

I cannot wait for the release of this movie. It’s going to be epic.

Awesome review. I love the How to Train Your Dragon movies. Can’t wait to see this one…

You’ll definitely love this one then!

Loved reading this! You know, I’ve only seen the first film of this trilogy but now I kind of want to go back and watch them all. Sounds like the third one isn’t too bad! I especially liked your comparison to Star Wars :D Although I’m curious: do you think the fact that you got an early release in Australia may have swayed your opinion for this review?

Not really. It’s just nice that a film come out here before the rest of the world sees it. Especially the final film in a franchise that I have loved.