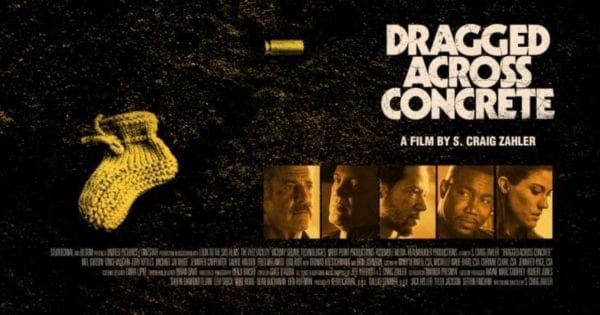 I have been anticipating Dragged Across Concrete from the moment I became aware of its existence. Every so often, I would peruse the Internet for any announcements of its release date. The earlier reviews from its festival screenings only brought more excited, despite some harsh critical words.

The criticism had less to do with the movie and more to do with its premise which, understandably, could enrage some individuals. You have two of Hollywood’s most noted right-wing performers (Mel Gibson and Vince Vaughn) playing racist cops who are suspended after their use of excessive force.

As is often the case, the initial controversy was unfounded and laughable. There’s little if any political subtext in the movie. This film was just an easy target. Fortunately, most reviews were positive. I couldn’t wait.

You might wonder why I was so excited. Well, this is the third directorial feature of S. Craig Zahler. I adored his previous two films, the ultra-violent western Bone Tomahawk and the bone-crunching prison-thriller A Brawl in Cellblock 99. Zahler makes exactly the kind of movies I like to see: unpredictable, filled with interesting characters and erudite slang — and lest we forget, a healthy amount of practical-effects gore.

I loved his films so much that I even started taking an interest in his music and literature — both I’d highly recommend. Notoriously, I even adore Puppet Master: The Littlest Reich, which Zahler scripted.

I’m also happy to inform you that Dragged Across Concrete satisfied my cinematic bloodlust.

When Henry (Tory Kittles) returns from prison, he discovers that his mother has been prostituting herself to pay for the rent. Meanwhile his paraplegic but intellectually gifted brother Ethan’s (Myles Truitt) talents are wasted because they cannot afford any decent schooling.

After Henry has acclimated himself back to civilization, he focuses all his talents to find an escape for his family’s financial woes. He teams up with his old neighborhood friend Biscuit (Michael Jai White), whose connections leads them to do a criminal score with a sociopath named Vogelman (Thomas Kretschmann) and his masked and murderous henchmen (Primo Allon and Matthew MacCaull).

Meanwhile officer Brett Ridgeman (Mel Gibson) and his partner Anthony Lurasetti (Vince Vaugn) find themselves suspended for six weeks without pay, after their use of excessive force on a drug-dealing subject. Similar to Henry, Brett seeks to provide for his family as his wife (Laurie Holden) is suffering from multiple sclerosis and his daughter (Jordyn Ashley Olson) is continually bullied and assaulted in the neighborhood in which they reside.

Bitter due to his low position on the police totem pole and not wanting his family to suffer, Brett transfers from upholding justice to thievery. Through an old contact, Friedrich (Udo Kier), he becomes aware of an upcoming score planned by Vogelman. Together with his old partner, Anthony, they follow Vogelman and his associates, hoping to rob them and share the riches between them.

It Takes Its Sweet, Beautiful Time… 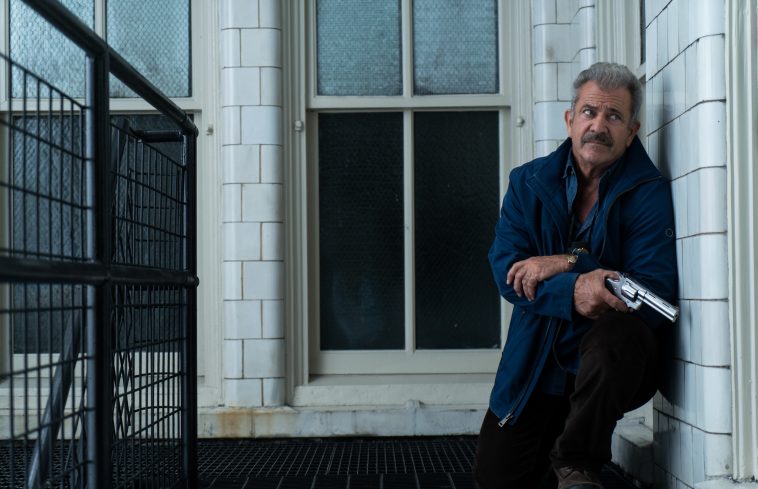 Mel Gibson as Brett Ridgeman. Image via The HotCorn

This added running time is not devoted to action or gore but rather on character interaction and development. We become acquainted with Ridgeman and his struggling wife and daughter; Lurasetti’s girlfriend Denise (Tattiawna Jones) whom he plans to propose to despite his insecurities about his financial future; and Henry prostituting mother and handicapped little brother.

In one moving dialogue scene, we also become aware of the bond between Henry and his old friend Biscuit. Relationships are calmly defined, motivations are understood. We understand the stakes.

Therefore if you’re aching for some mindless action, this is not the film for you. There are lengthy dialogue scenes and the pace is slow. However, all of these scenes are engaging due to the great performances and Zahler’s talent for writing dialogue. The dialogue itself is not overly quippy, it’s not filled with continuous pop-culture jokes — don’t expect this to be a Tarantino clone.

If you’re familiar with Zahler’s work, the dialogue is undeniably his. It’s not “natural”; people don’t normally speak this way. They speak in particular eloquent tones. For some writers, who prefer characters to speak as they would in real life and not in the way the individual writers speak themselves, this is considered a massive sin. It’s closer to David Milch‘s style of writing, though not as Shakespearean.

A Bit of Ultra-Violence 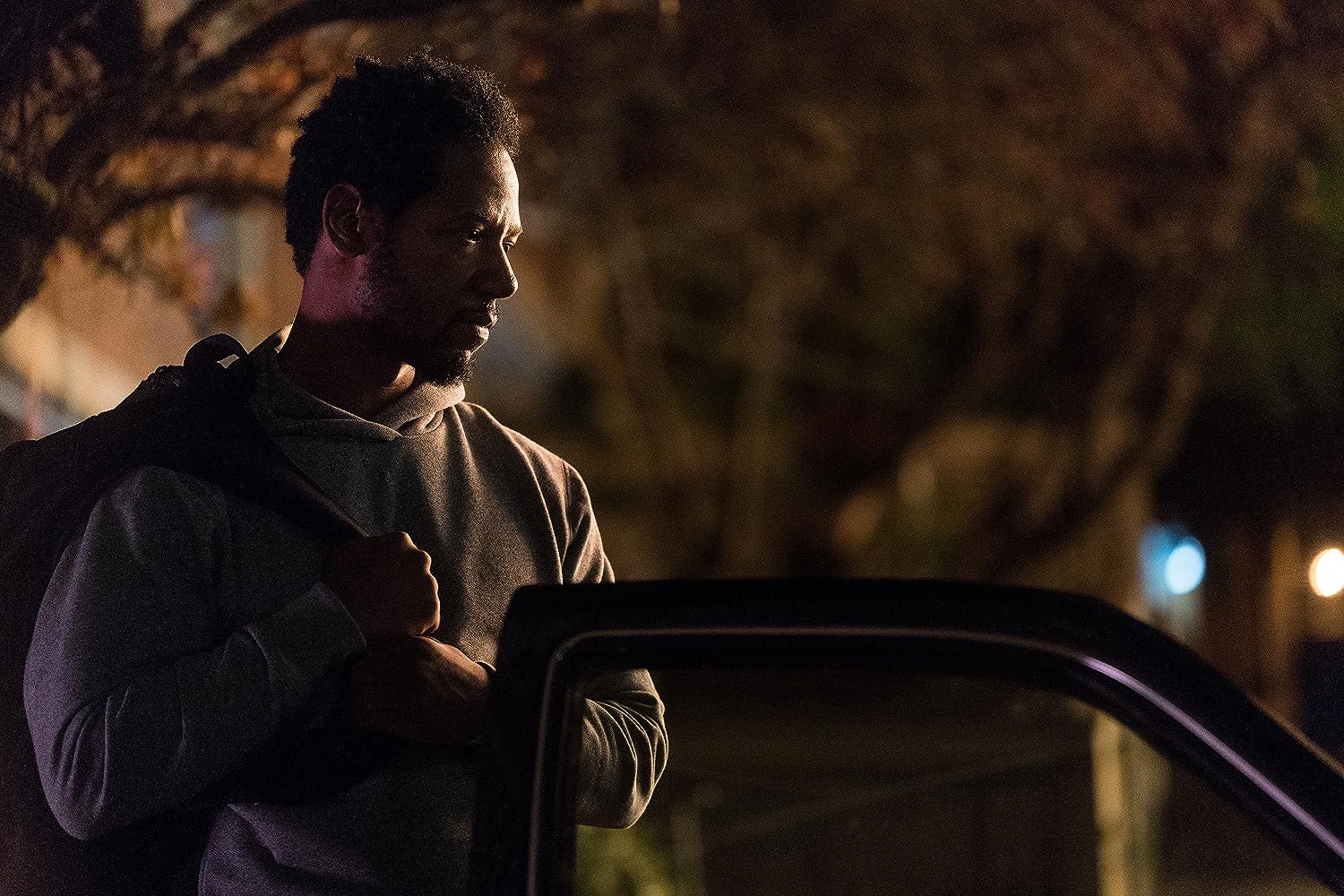 When violence does inevitably erupts, it appears in Zahler’s usual visceral glory. But similar to Zahler’s previous two films, the violence is actually sparse and little running time is devoted to it. It just becomes more effective when it does suddenly appear.

Initially, I had heard that this film was more retrained than his previous two films. It’s true that we don’t see someone getting cut in half, like in his directorial debut, Bone Tomahawk, but Zahler is certainly not going soft on the viewer. The violence is brutal and shocking. The villains’ dismissive attitude towards human casualties is introduced early on. We know what these monsters are capable off

Almost no violence is off-screen. We see the unrelenting damage that bullets have on the human flesh. A character gets sliced up. We hear the painful wheezing of dying men. Good people aren’t spared. One sudden eruption of violence upon a particular likable character left me reeling for a considerable amount of time. 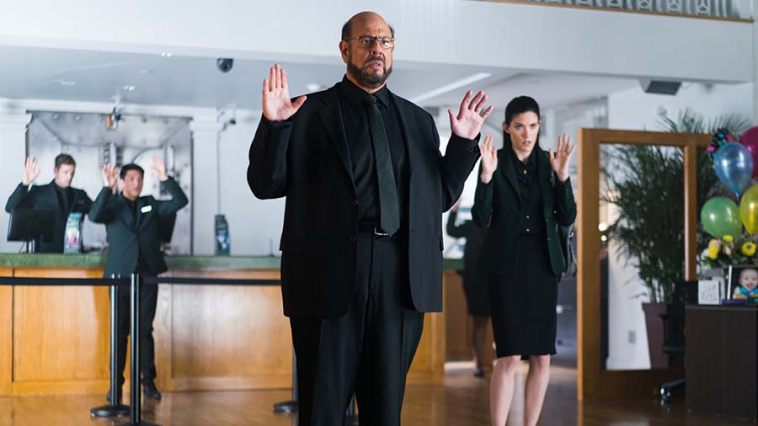 Whether or not you like Gibson’s personal beliefs, there’s no denying his screen presence and range. Whether as a goofball, a heartthrob or an action hero, Gibson has succeeded in all areas. Currently he’s become quite adept in playing growling anti-heroes — such as in the underrated Blood Father. Gibson as Brett Ridgeman is one of such roles and it might actually be one of his best performances of late. He’s a character that’s not entirely sympathetic but whose goals you can sympathize with. At the same time, you also know that his low position as a police officer is due to his own personality defects.

Vince Vaughn has long strayed away from his goofball persona. In Dragged Across Concrete he’s equally reliable as Ridgeman’s reluctant partner.

Besides the principal cast giving top-notch performances, the film also boasts a great supporting cast. The females in the movies might not drive much of the plot but they are not simply window dressing. Tattiawna Jones as Denise is portrayed as a career woman whose smarter than her streetwise boyfriend Anthony. Laurie Holden as Ridgeman’s wife suffering from multiple sclerosis is not portrayed as some weak woman who needs care. She expresses her desire to go back to work so that the family can afford to move to a better neighborhood — it’s just that her disease makes this nearly impossible for her.

But out of all of them, it’s Jennifer Carpenter as Kelly Summer who impressed the most. She might be introduced later in the game but you immediately feel for her.

The film also has a few great cameo’s from Don Johnson, Udo Kier and Fred Melamed. Zahler obviously likes to work with a reliable cast as he has worked with Johnson, Kier, Melamed (who has so far appeared in all of his movies), Carpenter and Vaughn before.

Admittedly, some of the early dialogue does feel a little preachy. Especially when Lusaretti exclaims to his police supervisor (a great and retrained cameo by Don Johnson) that “there’s certainly nothing hypocritical about the media handling any perceived intolerance with complete and utter intolerance.” This almost feels like Zahler’s going on a tangent of the current outrage culture that’s dominating the media right now. While I certainly share some of these sentiments, it almost does feel like Zahler is exercising his opinion on screen — though one could also make the legitimate case that this is what these officers would speak about in private.

Zahler has stated that he’s not interested in making agenda-driven movies. He instead wants his characters to drive his movies — see his interview on The Ringer. So I’ll take his word for it.

It might not be everyone for but that’s okay. Not everyone has to like it. If you’re a fan of S. Craig Zahler’s previous work, you’ll probably love this one. One might call this part of “pulp cinema” but I think it does this film a disservice — despite my love for pulp cinema. It’s filmmaking at its finest, even with its brutal content.

It’s a character driven crime-thriller, filled with great performances and unpredictable plot twists. Bone Tomahawk is still my favorite of Zahler’s work, but Dragged Across Concrete is another solid effort.

I can’t wait for what Zahler will have for us next.

Thank you for reading! What are you thoughts on Dragged Across Concrete? Comment down below!

[…] deny that some of the negative reviews surrounding Fatman had everything to do with the casting of Mel Gibson, rather than the film […]

Thank you for your review! I didn’t know that Zahler had made another movie already! I loved Bone tomahawk, I will look for this one in the cinema as soon as it arrives in my town!