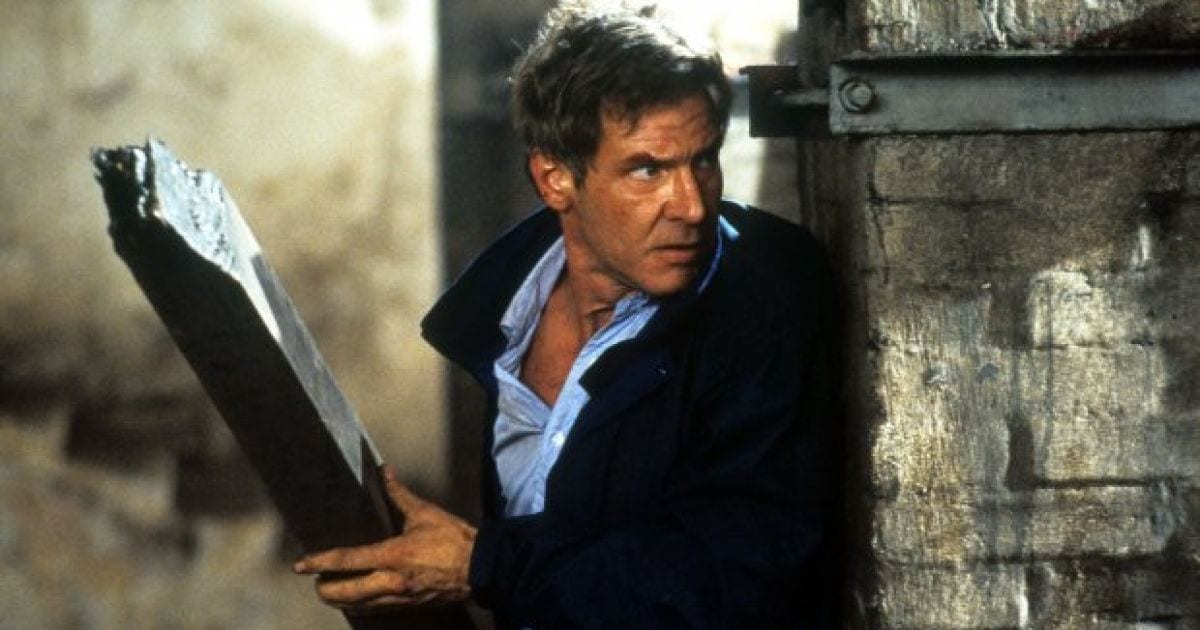 Tom Clancy’s Jack Ryan series is a beloved franchise among book lovers and film connoisseurs alike. Ryan — a witty yet slightly bumbling CIA analyst — is a surprisingly relatable character. The action is well-paced and the details are generally well-researched. It’s a perfect fit for action lovers. Clear and Present Danger perfectly encapsulates all of the best aspects of a Jack Ryan film into one great movie.

Harrison Ford is an amazing actor; very few of his films have phoned-in performances (we’ll give him a pass for the last decade — he’s earned it!). Clear and Present Danger is no exception. In fact, his performance in this film is among one of the best in his career.

No one else plays Jack Ryan the way Harrison Ford plays Jack Ryan. He adds a certain amount of sobriety to the character that other actors (Ben Affleck, Alec Baldwin, etc.) fail to grasp. Ford has a way of expressing entire paragraphs with just a twitch of his mouth or a raise of his eyebrow.

Plus, the casting of Ford as Ryan is the only accurate casting I have seen of the character. Jack Ryan is supposed to be a little older and experienced. Younger actors that have played him like Chris Pine or Affleck just don’t have the same wisdom in their features or mannerisms to portray a character like Jack Ryan. Harrison Ford perfectly nails those mannerisms because he is basically the same age and has the same personality as Ryan. Pitch perfect casting for this movie!

One of the biggest reasons I prefer the Jack Ryan movies over the books is because of the pacing. Though Tom Clancy was a talented writer, he was never one to be brief. A character’s inner monologue, a description of a rifle, or even the layout of a character’s breakfast could take pages.

Director Phillip Noyce had a monumental task ahead of him when he decided to adapt Clear and Present Danger to film, but he didn’t let the challenge dissuade him. Clear and Present Danger is one of the few films I’ve seen where both the book and the film are so similar that you don’t need to read the book before the movie. All Noyce did was take out a lot of unnecessary descriptions and monologues. 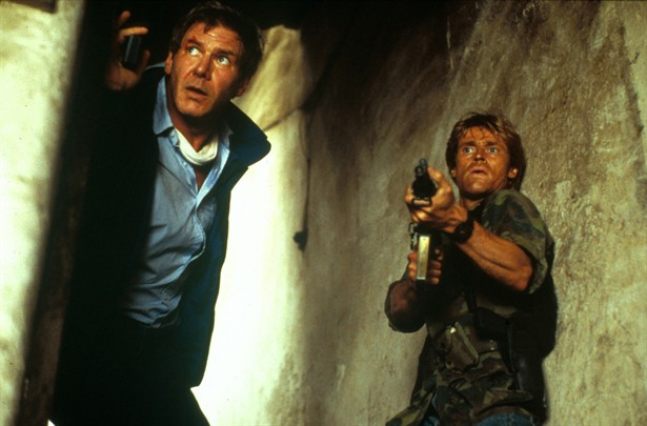 The pacing is brilliant. Sometimes, action movies can get a little boring when they lay out the plot — not so in this case. I found myself glued to the screen when I watched this film. Despite a long runtime, Clear and Present Danger moves quickly through everything you need to know and then let’s you linger on the more action-packed scenes. A hard balance to find, but Noyce managed to do it!

Clear and Present Danger could have easily become a star-studded film, but that’s never what the Jack Ryan films were about. Get a few big stars for the main characters and then fill the rest with character actors who do well in whatever role you put them in. This choice ends up creating a fantastic film that is never distracted by the actors and instead focuses on the characters.

On a side note, I would especially like to applaud Henry Czerny’s performance as Deputy Director of Operations of the CIA Robert Ritter. To play a character so unlikable can seem hard sometimes, especially if said actor is a good-natured person. But Czerny shines through in this performance and creates a malicious, prideful, and frustrating villain to Harrison Ford’s purer Jack Ryan. It’s a great contrast between the two characters that keeps the film interesting.

No Romance in Sight

Something I really hate in action movies is when there is a romantic side plot that no one cares about. I’m here for the action and the action only. I don’t care that you can’t commit to your girlfriend or that you two never see each other. Guess what? You’re an action hero. Suck it up and own it. 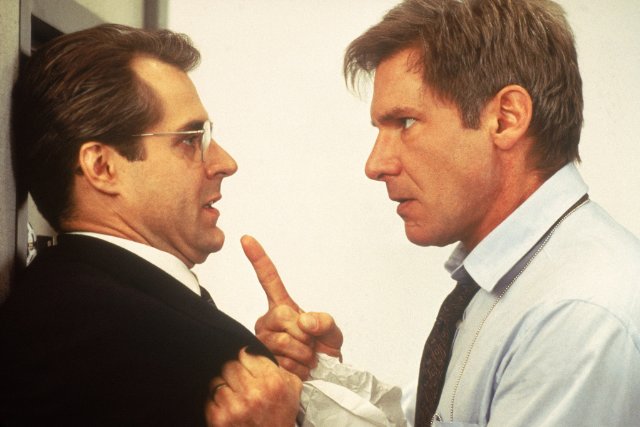 Clear and Present Danger is perfect for those people who hate romantic subplots. Sure, the film doesn’t pass the Bechdel test, but I’m not sure how much I care about that in an action movie. In this film, Jack Ryan already has a well-established relationship with his wife Cathy and she is understanding of how much time his work takes sometimes. She isn’t jealous and she doesn’t whine about how she never sees her husband. She understands that he has an important job to do for his country and she fully supports him.

The only slightly romantic subplot is really downplayed compared to the book and it ends quickly. You aren’t subjected to long makeout scenes or uncomfortable sex montages. Instead, you get to sit down and fully focus on the drug cartels that are plaguing the United States government and watch as Jack Ryan takes them out with his awesomeness.

The 90s was quite the decade, especially considering how far technology advanced in just a short time. Clear and Present Danger shows its age in nearly every frame, with big boxy computers and black screens with green text. To everyone except the very young, it brings on a sense of nostalgia. 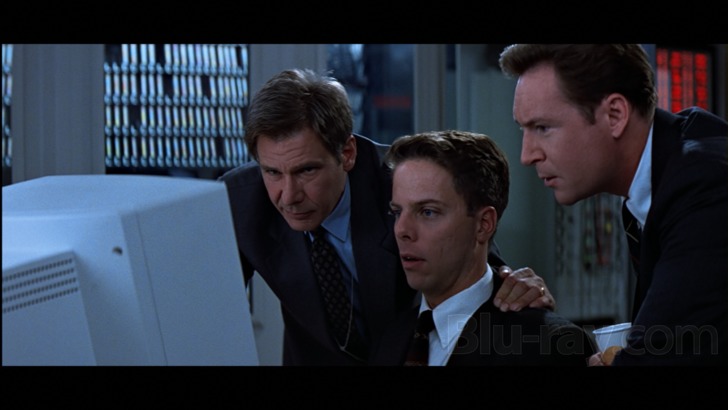 There’s just something about a government room full of flashing computer lights and dial-up tones that sets the mood for a spectacular action film. It gives an air of secrecy and intensity to the action. Plus, you get to include the “nerd” character, whom we tend to root for in movies.

While some may consider this a downside to the film, I quite enjoy the old-school atmosphere it gives. I even enjoy the BS technical jargon and “hacking” they throw into the film. It reminds me of a simpler time in movies. A time when there wasn’t such a thing as the “Goofs” section on IMDb that would tell you everything wrong with the movie. You just accepted the movie logic and moved on.

I Love This Movie So Much

If you haven’t seen Clear and Present Danger, I would highly recommend it. If you have, I would recommend you watch it again.

Clear and Present Danger is a rarity among film adaptations of books in that it has rewatch value. You don’t just watch it once because you read the book. You watch it over and over for the action, the pacing, and the phenomenal performances of the cast.

Harrison Ford brings an air of maturity and sobriety to a character often written off as sarcastic and maybe less serious than he needs to be in his position. Ford’s portrayal of Jack Ryan is the best I’ve ever seen and Clear and Present Danger is the pinnacle of his Jack Ryan career.

Overall, Clear and Present Danger is the perfect Jack Ryan film and I don’t think any other action movie based on a book can match up to it.

Thank you for reading! What are your thoughts on Clear and Present Danger? Comment down below!

Great article. Will definitely be back to read more

Great review, and quite agree. Along with Eastwood’s “In the Line of Fire” this is in my list of DVD thrillers I can return to again and again. “Pick up the phone Moira!”