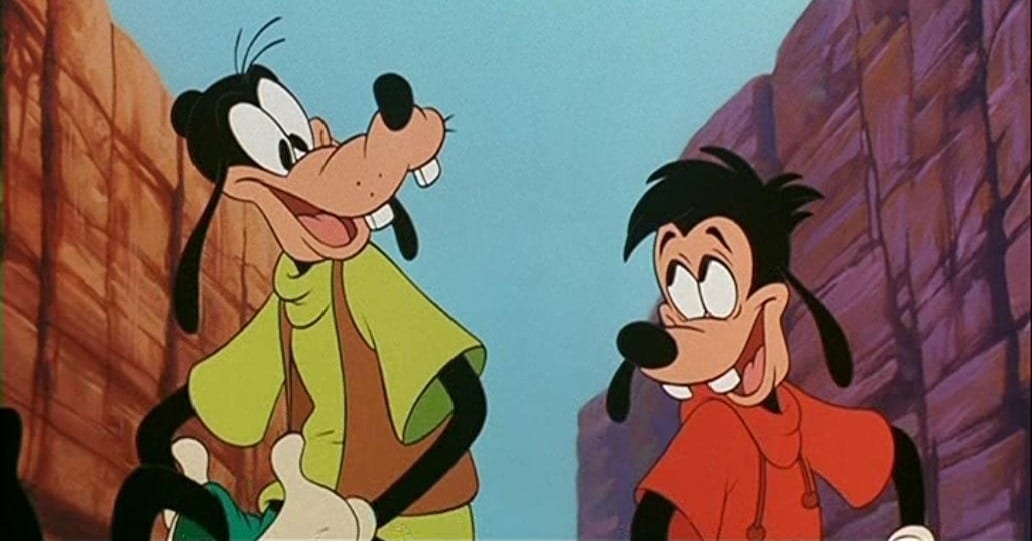 With nothing to do on a Tuesday afternoon in the land of quarantine, I sat down to watch A Goofy Movie (1995) to celebrate its 25th anniversary. It’s always been a favorite of mine, if for no other reason than I watched it too many times to count as a child. Turns out, when you actually pay attention, A Goofy Movie is even more hilarious.

A Goofy Movie’s main audience is children, but it never forgets who’s watching it with the children. I caught so many slightly off-color jokes that I was pleasantly surprised by Disney’s willingness to push the envelope.

Then there was the fact that the whole thing was just so…goofy. The animation was over-the-top, the jokes were stupidly funny, and the characters were so grossly disproportionate that I couldn’t help but roll my eyes in amusement.

In a movie where the two main characters are anthropomorphic dogs, anything goes when it comes to character design. The animators of this movie really took that concept and ran with it.

The character design for A Goofy Movie is a big part of why it’s so goofy. So many characters are just giant, round humanoid creatures that are just so goofy to look at. At least 80% of the characters in this movie had giant butts, which I still find funny as a nearly-grown adult. Side characters are given grossly exaggerated features, like buck teeth, bulging eyes, protruding lips, etc. Looking out at the students at Max’s high school was like looking at a normal crowd through funhouse mirrors.

Animation is a very flexible medium for this type of character design and the animators of A Goofy Movie made sure to make full use of every weird characteristic they could give a character.

This film is a lot funnier when you’re an adult. For example, I loved the meta-references to Walt Disney throughout. Goofy had a keychain that had the Disney stylized “D” on it and then when he and Max Goofy play 20 Questions Walt Disney is the answer. I find it hilarious that Disney had the balls to make that sort of joke. It’s like a little self-congratulatory pat on the back.

Another joke I found hilarious was when Max and Goofy are at Lester’s Possum Park (admittedly, the cringiest part of the movie) and Max runs into the costumed mascot. Right before the mascot walks up, Max is in the middle of saying “My life is a living hell” but is cut off at “hell” by the mascot saying “Hello!” It’s that kind of comedic timing that I expect from Disney.

There are quite a few more subtle references and jokes within the film that only adults will get. That’s what makes A Goofy Movie so timeless to audiences.

Fun fact: did you know Xavier Coogat is a real person?

The Power of Animation

Along with the crazy character designs, the animators of this film really took liberties with the concept of physics and real-world mechanics. For example, if a car blows up with Goofy inside of it, Goofy will be thrown in the air and then rocketed through Roxanne’s roof but still survive.

That’s another thing I love about animation — you can basically screw physics. If a car falls into the water, it won’t sink as cars should, but it will float so you and your son can have a bonding moment and sing a touching little song. People can dance on top of their rapidly moving cars on the freeway during the musical number. Goofy can shove two giant pancakes in his mouth at once

I will admit that I’m more partial to live-action rather than animation, but I love how animation can do this. I also really love how much A Goofy Movie utilizes that concept. It sees that its audience is children and that they won’t be put off by all the factual inaccuracies and decides that it’s going to go all out. Why can’t we have musical numbers on the freeway? Why can’t we save our father from drowning in a waterfall by reeling him in with a fishing pole? It’s these kinds of questions we need to be asking ourselves more often.

WHY ARE THERE SO MANY NUNS????

This is my absolute favorite part of this movie: there are always random nuns in almost every scene. You can see them in the freeway musical number, at the diner that Max and Goofy stop at, even at the riotous Powerline concert in the end.

I’ve always been a big fan of nun humor since The Sound of Music (1965), so I’m a big fan of its use here. Why are nuns so funny??? Seriously — nuns saying “Yeehaw” is peak comedy.

Another part in A Goofy Movie that I find so off-the-wall hilarious is Bigfoot. With a wild fly fishing cast, Goofy ends up hooking Bigfoot, who terrorizes Max and Goofy for the better part of a night as he steals their keys.

I think the best part of this bit is that neither Max nor Goofy really questions it after a minute. They both accept that Bigfoot exists and that he is ruining their vacation. Then there’s Bigfoot dancing in the back to disco and putting on absurd sock puppet shows for the Goofs. There are just so many random bits in this movie that I love!

Sometimes animated movies go over-the-top with how much slapstick humor they inject in their films. Sometimes they ignore the laws of physics too much. And sometimes they’re just plain stupid.

Somehow, A Goofy Movie manages to hit all of these points and still be a stupidly hilarious film. Maybe I’m biased because I grew up with it, but A Goofy Movie really is a goofy, funny movie that I think everybody should watch, if for no other reason than the nuns and Bigfoot.

Thank you for reading! What are your thoughts on A Goofy Movie? Comment down below!

[…] The Wolf House being a multimedia animated film, the house is in a constant state of change. No two rooms look alike, and everything on screen is […]

This is one of my favorites, I’ve got to share this with my kiddos!

I’m not as in love with this film as others are, but I do love After Today and On the Open Road!

A favourite Disney of mine! I actually JUST rewatched the movie a few days ago after work since it’s been so long…can’t forget the quick scene of the nuns at the monster truck rally Max drags Goofy to.

Forwarded this to my daughter – Goofy was her favorite Disney Movie – she never went anywhere (when she was young) without her Goofy doll! Thanks for the info!