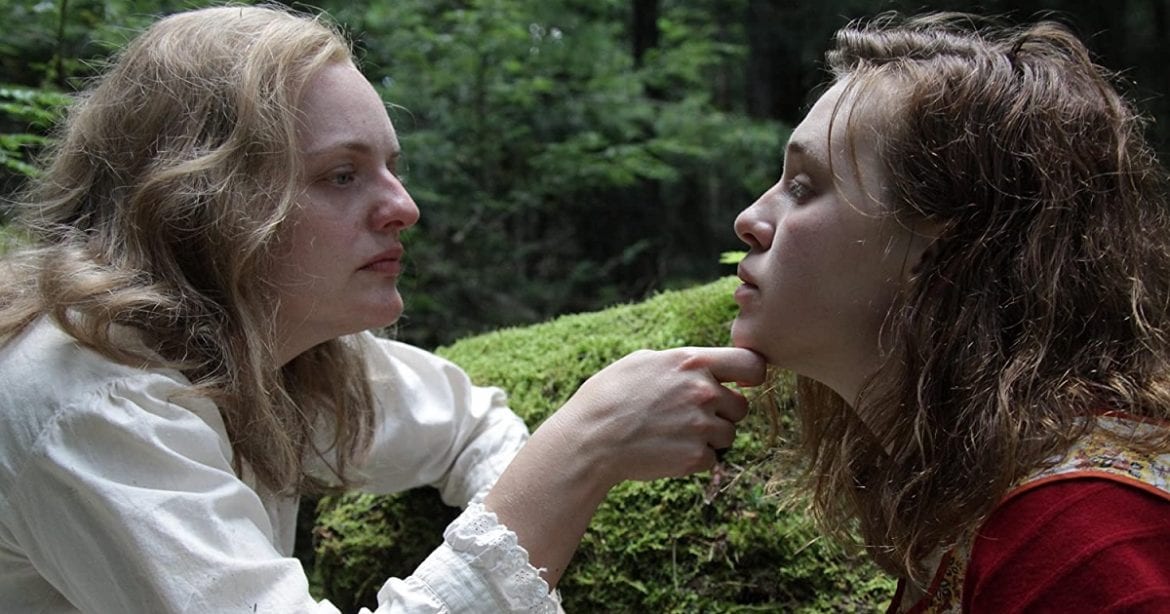 The name Shirley Jackson is well-known to horror veterans. She’s someone I mainly know for inspiring the hit Netflix television show The Haunting of Hill House. Personally, I’ve been too terrified to rewatch the show or even to pick up Shirley’s original book because the show is one of the scariest things I have ever watched. I mean this in the best way possible! I was stoked to find there was a movie about the book’s writer out. Not that I was hoping for any Hill House magic in Shirley, especially considering Jackson didn’t write it until years later. Instead, what I was hoping for was an insight into Shirley Jackson’s psyche and her writing ways.

Shirley is a Different Kind of Biopic

At the time only known as a short horror writer for The Hunger Games–like short story, “The Lottery“, Shirley Jackson (Elisabeth Moss) gets inspired to write her first novel when a young couple moves in with her and her husband, Stanley (Michael Stuhlbarg).

It was hard to know what to expect out of Shirley. It’s a biopic that, at times, is not told from Shirley’s point of view; it’s mainly lodger Rosie (Odessa Young) looking in from the outside with a younger, saner perspective. The plot has an overall uncomfortable feeling of dread; this is mainly due to Shirley’s odd behavior towards the young couple and Stanley’s desire to keep the young couple close by. Mainly so that he doesn’t have to clean up after miserable Shirley — he can ask young woman Rosie to do it for him.

The film immediately paints Shirley as a woman who is often miserable, who hates talking about her work and who says unexpected things. I quickly realized how distressing it is to think of a female writer who writes horror stories about women slowly turning mad or are being stoned to death; early on, it makes you wonder whether Shirley heavily inspired her work on her own psyche, or whether she just had an interest in it.

The walls of the movie’s framework slowly close in, and even though this is in no way a horror movie, this is not your usual biopic. We don’t actually start the film looking at Shirley and Stanely; we start with Rosie and Fred (Logan Lerman), the young couple on their way to moving in with the Jacksons. They are instantly sketched out as a happy, and healthily sexual couple. Perhaps to provide a contrast to the instantly odd vibes we are getting from the Jacksons’ marriage.

Nevertheless, for the majority of Shirley, we watch Rosie’s judgment of the Jackson couple and how she feels about them and their world. This view sometimes switches to Shirley herself; the switch is made in ways that make sense. At the same time, the lines start to blur and we find ourselves to never be too sure through whose eyes we are looking. I found this such an interesting method to realize a biopic about a writer. It’s like watching most of Bohemian Rhapsody through John Deacon’s eyes while, in practice, the movie focused on Freddie Mercury’s life and career.

To compare, it makes for a different movie and understanding of our main character. Of course, in Bohemian Rhapsody, Freddie is told — a number of times — how his behavior affects others, but in this case, our John Deacon (Rosie) tells us directly and immediately what it feels like to live with Shirley Jackon.

Shirley handles the classic gender roles that were certainly predominant at the time, for a lack of a better word, interestingly. At the start of Shirley, the movie asks you to empathize with Shirley’s poor husband Stanley, who had to hire Fred to help him lecture so he can be home more to care for his wife. Stanley asks Rosie to take care of the household in return for free boarding so that Shirley can concentrate on her writing. The film asks us to feel so sorry for poor Stanley.

Looking at the behavior on paper indeed reflects badly on Shirley; especially as Stanley sets himself up to be the most supportive husband for his writer wife. But as always with this film, nothing is as it seems and from the outside. It’s easy to look like the most perfect husband.

Through Rosie’s eyes, however, we see more of what part Stanley might play in Shirley declining mental health. Rosie and Fred appear as the perfect couple in comparison, and one quickly wonders whether Rosie was simply the perfect wife because she enjoys having sex with her husband and cleans the house when asked to. After all, we are asked to understand that this takes place in the 1950s, where it is normal for men to tell their wives doing housework is “a bit of fun” and for the husband to make all decisions on where the woman lives and what she should be doing with her time.

Funnily enough, I almost believed it. I so nearly believed that Stanley is the one in pain and in the shadow of his talented, but mentally tormented wife. We might never get a real answer, but look closer; Mrs. Jackson was an odd woman, to put it lightly, but is she wrongfully described as mad? As described by her own husband at times, if I may add. Similarly to some of Shirley’s work, we may never get a real answer, but this movie gives us some pointers to work with.

Elisabeth Moss has nailed this year so far. Obviously, many movies have been pushed back during the global pandemic, but this doesn’t take away from some of Moss’s recent performances, including this year’s The Invisible Man and now Shirley. Moss can take a movie to a higher level in any case, but will her performance in Shirley be noticed by the Academy? Moss’s performance is one to remember, not only because she looks a lot like Shirley herself, but because throughout the movie it is easy to feel the uncomfortable vibe Shirley inflicts on anyone near her. Here, Moss becomes Shirley through and through and, in many scenes, lets her eyes speak for themselves. Moss is hard to read in this, just like Shirley herself.

Thank you for reading! What are your thoughts on Shirley? Comment down below!

[…] head over heels for Relic because it tells a story, long before it becomes a horror movie. The daunting sense of dread begins when the opening shot fades in and lasts until the closing shot fades out. It does so […]

Thanks for the review. It does sound interesting.This would make a great double-feature with the 1963 classic The Haunting, an adaptation of Shirley’s 1959 novel (the film is much better than the Netflix series).