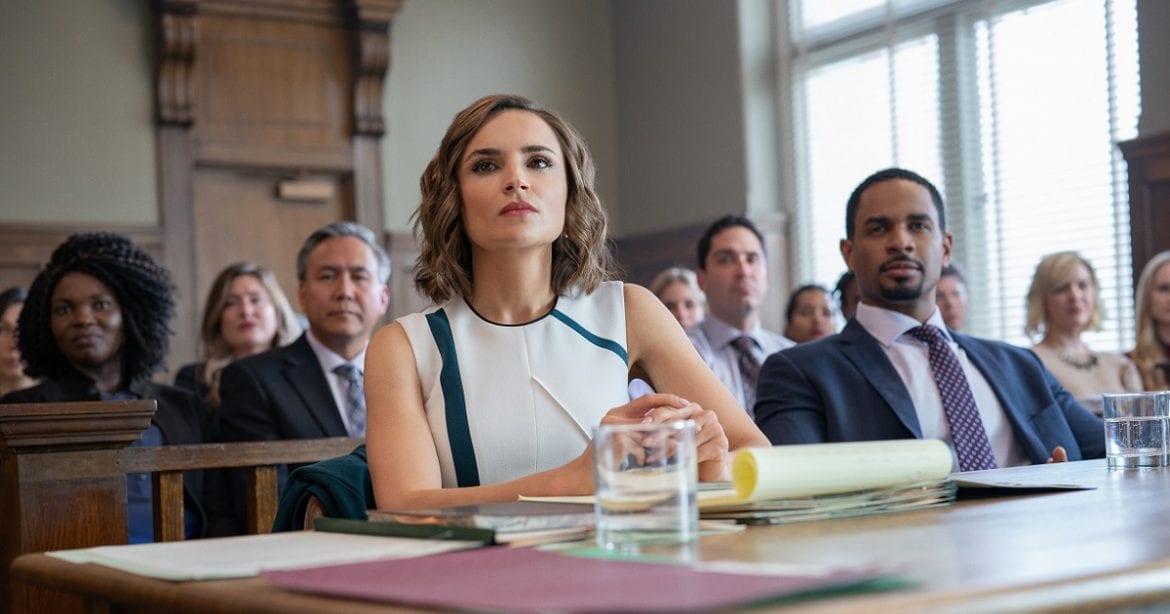 How bad is Love, Guaranteed? Well, this is what’s displayed before the end credits: 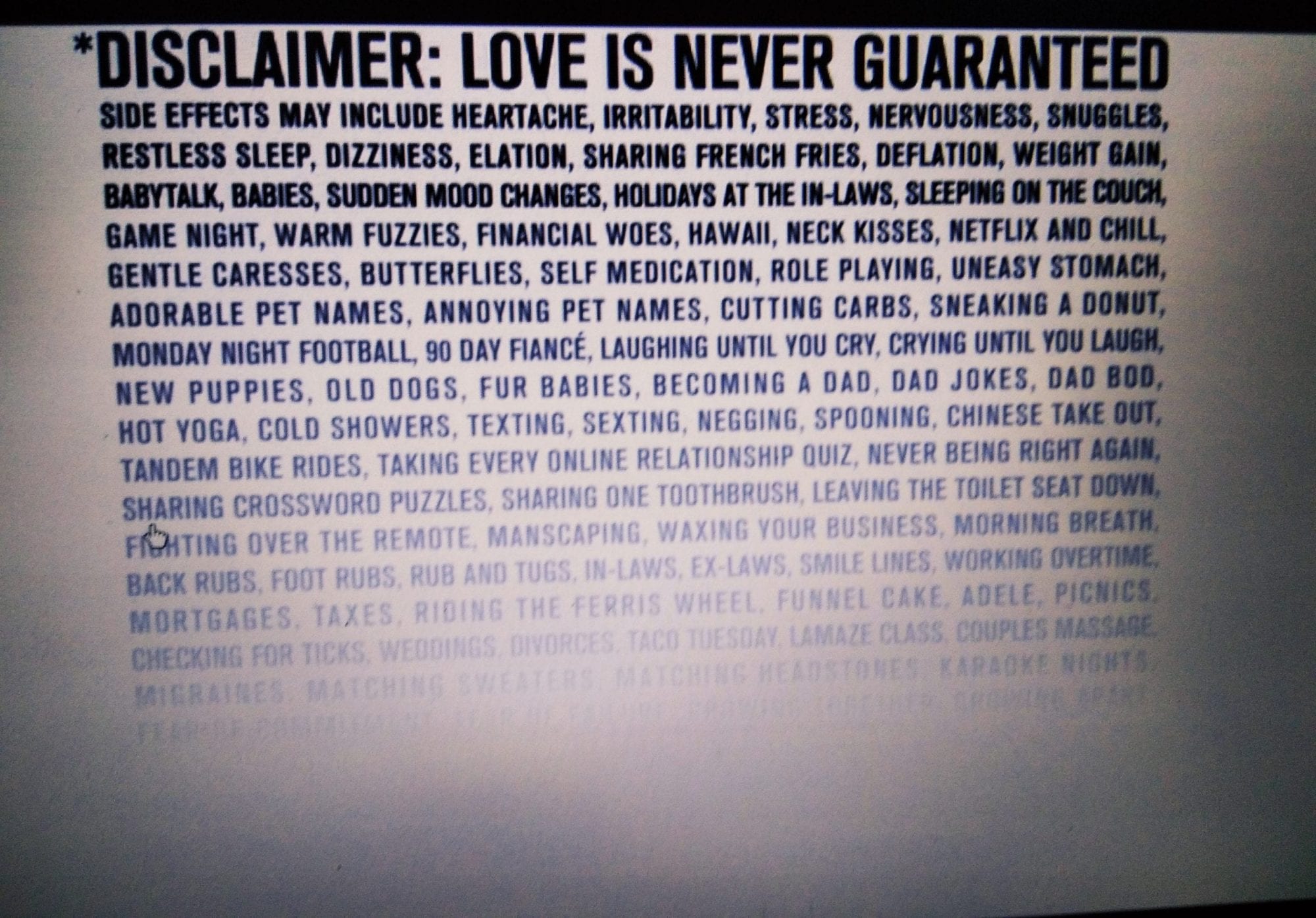 While you’re busy throwing up, I’ll watch a cat video for a bit.

Right, where was I? Oh, yeah, Idealistic. Also broke because of working pro-bono. So broke that she can’t afford to fix her car door. She can, however, afford two assistants. Sassy Denise (Lisa Durupt) and Roberto (Sean Amsing), who’s flamboyantly camp in a way I thought no fictional gay man had been allowed to be since 1997. (Of course, he at no point is explicitly stated to be gay or, heaven forbid, shown with a partner. This is clearly aimed at Hallmark’s audience and Hallmark’s audience will collapse with a fit of the vapours at the suggestion of same-sex handholding.)

Her large office is also suspiciously well equipped with Apple™ computers. Still, okay, she’s broke, so when Nick (Damon Wayans Jr.) approaches her to represent him in a lawsuit against dating site loveguaranteed.com, she jumps at the chance.

Nick has noted that the website guarantees to find you love within one thousand dates. At the start of the film, he’s racked up 986 dates. In, it’s revealed, two years. Now, a quick check on the calculator shows that’s just under nine and a half dates a week. And that’s if we assume he took no breaks over Christmas, Thanksgiving, or took any holidays. The film is chock full of moments like that, where the viewer’s mind wanders off on a different line of thought starting “…haaaang on a minute, if that’s true then…” It’s a truly bizarre alternate universe that even by rom-com standards is detached from reality. It feels like Netflix created a sentient “Live, Laugh, Love” poster and set it to work writing a script.

The writers‘ last film was Falling Inn Love, also a Hallmark-esque rom-com with a perfect yet inexplicably single man, a leading lady that’s stated to be in financial difficulties yet still spends a fortune during the film, a non-threatening gay sidekick, an antagonist that isn’t really a problem for more than five minutes…like I say, I’m 70% convinced no human being was involved in the writing process and we’ll be getting these on a regular basis for a while.

But Apart From All That, Is Love, Guaranteed Any Good?

Well…no. But, it’s well-cast. Damon Wayans Jr. has an easygoing charm that is almost enough to distract from the insane contradictions of his character. This is a man that spends 10-20 hours a week going on internet dates and he sells himself as not being a sociopath. That’s impressive work. (He gets bonus points for being a member of the Wayans family yet not being involved in White Chicks.) He’s helped by the script making Nick unreasonably nice. He’s a volunteer physiotherapist that is only after the money from the case to donate to sick children. (They handwave his apparent magic financial status as being a “retired sports player”. They don’t even say which sport. I assume it’s not curling.)

Rachael Leigh Cook has been doing Hallmark movies for years so she’s comfortable playing “ditzily charming”. Heather Graham, as the CEO of Love Guaranteed, gets to have fun being all hippy dippy “I wanted to cure loneliness” half the time and Silicon Valley buzzword nonsense for the other half. All three actors are frankly better than the material deserves but they do raise it above the levels of Hallmark’s usual fare.

It’s an odd career that has led Mark Steven Johnson from directing big-budget movies like Daredevil and Ghost Rider to making this. To deserve that sort of luck he must have tied a black cat to a ladder and hit a witch with it. Or, you know, directed Ghost Rider.

There’s no visual flair here. To be fair, rom-coms aren’t known for inventive framing, but you’ll struggle to remember any particular shots or locations. Nick says that every one of his evening dates was at the same restaurant (See? Sociopath.) so you’d think it would be somewhere special, but ‘The Coral’ seems as forgettably pleasant as the rest of the movie. (Sidenote: fancy restaurants don’t usually sell a “restaurant name” burger and fries. It feels like the focus groups or algorithm didn’t want Susan ordering something fancy that Joanne Sixpack wouldn’t identify with.)

Love, Guaranteed is derivative and a bit silly with zero stakes and a wafer-thin plot. It’s not going to win awards anywhere. Frankly, it’s terrible. But it’s not “actively harmful” terrible. It’s a “does what it says on the tin” movie. If you’re looking for an easy watch after a hard day, it’s going to fill the space. Just don’t expect anything you need to engage with. Or that you’ll remember by this time next week.

Thank you for reading! What are your thoughts on Love, Guaranteed? Comment below!

[…] Since then, we’ve watched as society’s view of internet dating has flipped. At one time, finding a partner online was essentially considered a final resort for sad and lonely people. Often this method was […]