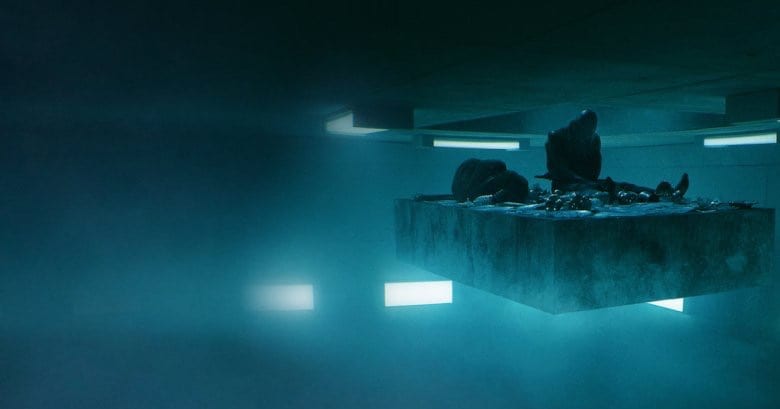 The Platform often returns to a somewhat meta retort shared by the main character, Goreng (played by Ivan Massagué, who looks like a Spanish John Turturro), and his prison cellmate, Trimagasi (Zorion Eguileor, the perfect sleazy old man for this kind of movie). In the first few moments in the vertical prison hellscape, Goreng is quite clearly a stand-in for the audience watching the movie, asking Trimagasi just about every question he can think of in quick succession so that he (and we) can get a quick understanding of this confined world.

Trimagasi is quick to point out the bluntness of some of Goreng’s questions, often responding with variations of, “it’s obvious, isn’t it?” or using “obviously” as a button to most replies. The irony of it all, however, is how overused and obvious the use of “obvious” becomes with the film’s inability to twist its references into something useful. By its 20th instance, what started as a slightly cute rebuttal against the usual exposition dump in this kind of thriller turns into a parody of itself. The same can be said for the entirety of The Platform, which I ultimately found mishandled and perfunctory.

“Subtlety” isn’t exactly baked into The Platform, a gnarly film in which a platform full of food is sent through a vertical prison, only for nothing to be left over for the bottom levels to eat because those at the top take far more than their fair share. The literal cannibalization that takes place in the lowers levels is merely the exclamation point at the end of a sentence that was already typed out in all caps.

But for films like The Platform that are almost entirely allegory, a common — and unfortunate — response from many is to argue that those films fail because they are obvious.

It’s always strange when this conversation pops up: some of the most widely beloved films are fairly obvious. Look no further than Parasite — or any of Bong Joon-ho’s films for that matter — which wears its ideas proudly and clearly. The Shawshank Redemption, possibly the most beloved movie ever made, is also supremely forthright in its messaging; by the end, it’s abundantly clear that “hope is a good thing.” The examples are endless, which is why I find it very strange which movies we choose to praise for clear takes on troubling societal issues, and which we ridicule.

This is a very strange corner for me, given that I don’t like The Platform. But the lack of nuance is consistently frustrating in this sort of conversation, with many often conflating bluntness with badness. Yes, The Platform is very obvious, but it’s also not one long sermon, either. Realistically, it’s more so an inventive backdrop for the grizzly violence than a soapbox.

More than anything else, the execution of The Platform‘s core idea is jumbled, contrasting calls for peaceful protest with hypocritically gruesome, gleeful, and mistimed violence — and the occasional turd plopped onto a man’s face. While it’s bound to keep your attention in that sort of “we don’t want to get bored and cancel your subscription so here are ten different things at once” way that Netflix loves to implement with the genre movies it purchases out of festivals or produces in-house, my frustration lies in The Platform‘s inability to form a coherent thought without contradicting itself.

I get the sense David Desola and Pedro Rivero wrote The Platform from a place of extreme anger. The overwhelming despair written into the situation along with director Galder Gaztelu-Urrutia’s ability to capture a strong streak of nihilism is greatly appreciated coming from a man who loves it when filmmakers get angry. Two years later, I’m still eternally grateful for Boots Riley’s rage coalescing into the titanic Sorry to Bother You…and it allowing for Armie Hammer’s iconic line reading of “you’re gonna have a horse cock.” Though in this case, Gaztelu-Urrutia, Desola, and Rivero seem to misplace a lot of their frustration: they’re so committed to capturing a mood that character motivations and plot mechanics seem to conflict with The Platform‘s core idea.

Gaztelu-Urrutia is a slick enough director to keep The Platform watchable throughout. I’m genuinely curious to see how he progresses, being a first-time feature director here. The film is a classic case of a rookie director putting everything into his first film so that hopefully someone will like something in there, thereby all but guaranteeing he’ll get another crack at it down the line. The same goes for Desola and Rivero as screenwriters.

The immensely visceral nature of the film can sure mask a lot: one bit that got a laugh out of me is an inmate’s decision to bring a rope into the prison as his prized possession. Luckily, he knows he’s in a confined horror movie and will need that rope later! But one thing it won’t cover for is a very weak third act, one that had me thinking “wow, that was anti-climatic,” “what’s stopping more inmates from trying that?”, and “is all that head-smashing really necessary?” all at the same time.

A Strong Sense of Desperation

Granted, The Platform stages the torment nicely. Ivan Massagué is tremendous at conveying the fear, anger, and exasperation that comes with his predicament, and The Platform is tremendous at populating the edges of the screen with lively, memorable supporting characters. Rather than pulling punches, The Platform opts to pummel its characters and make their fate worse whenever possible. The film consistently increases the physical torment to the point of pure exhaustion for both the characters and you sitting on your couch. The overwhelming beatdown felt by Goreng and others stuck in the prison is the one spot where a strong message comes through.

As a contained horror/thriller, you can do much worse than The Platform, but as a commentary, you can do a lot better. The sort of combination that will certainly lead to short-term success (i.e. The Platform consistently staying in Netflix’s Top 10, a figure I still inexplicably choose to believe Netflix is lying about to boost their original content) thanks to a strong WTF factor baked into the movie’s premise, but not long-term admiration. A curio we’re meant to stop and stare at for a few moments like a freak show at an old-timey carnival, get a quick rush, and move on from entirely soon after.

Thank you for reading! What are your thoughts on The Platform? Comment down below!

[…] regularly select such bad movies? Granted, there are some gems in their horror catalog, like The Platform, which has become one of my favorite movies of the year so far. But Romina? Mark of the Devil? I […]