‘Outside the Wire’ Loses Itself in Dreary Cyborg Action 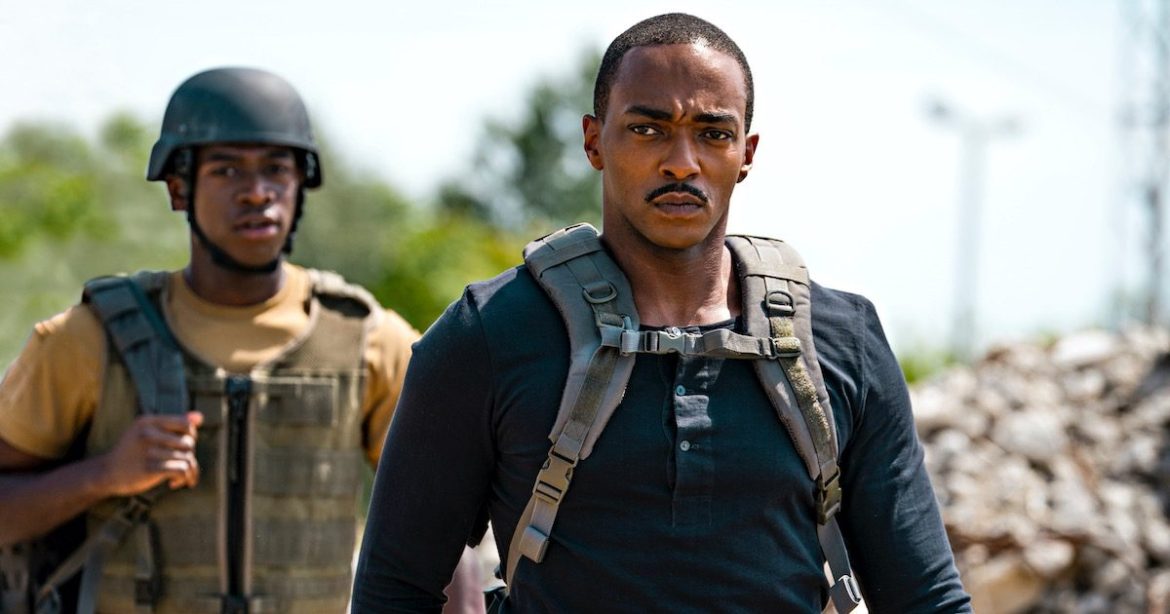 I don’t know about you, but I certainly didn’t go into Outside the Wire expecting it to function as a critique of the U.S. military. Mikael Håfström’s latest operates with the idea that if the military continues to adopt technology and remove the human element from war, it will only desensitize us further from the violence. It’s an interesting idea to think about: are we more likely to kill when all we have to do is push a button to deploy a drone missile from thousands of miles away? But Outside the Wire is another lacking Netflix genre film, so it rarely gives this idea the consideration it deserves.

The year is 2036. Outside the Wire opens with a very self-serious scene wherein soldiers are making their way into a combat zone in Europe with fighter robots (called “Gumps”) in tow. They immediately fall under heavy fire from the enemy. Disobeying direct orders, our hero Thomas Harp (Damson Idris) drops a drone strike on the area, killing two friendly soldiers, but saving 38 others. Håfström plays up the lack of feeling in Harp’s decision-making as he locks in on his target by having him chomp down on some gummy bears. (A fairly weird and specific choice in a vacuum, but we also later find out Harp’s wife calls him “gummy bear” as a pet name. So is he thinking about his wife as he makes the strike? That’s fairly morbid, isn’t it? Did his general love for gummy bears cause his wife to give him that pet name? Or is this just a coincidence? Did Haribo sponsor the movie? I have too many questions about this odd detail, but I’ll move on and spare you the unnecessary speculation.)

Harp is quickly reprimanded for his decision and reassigned to a unit on the ground. His superiors view this as an opportunity for him to re-learn the human element of war and to get out from behind the joystick. At camp, he teams up with Leo (Anthony Mackie), a humanoid robot supersoldier that functions as the Marines’ ace in the hole, an operative designed to subdue the enemy as an army of one. Luckily, Outside the Wire spares us the details of how he was created; for the purpose of the film, you just need to know he’s far more powerful than an average human.

Together, Harp and Leo are tasked with finding and stopping the infamous war criminal Viktor Koval (Pilou Asbæk) from launching Russia’s load of Cold War nukes. And they’ll have to fight through a lot of vaguely Eastern European combatants to do it too.

As Harp and Leo enter the warzone, Outside the Wire becomes more of a buddy cop film (buddy soldier film?) with the leads sparring with each other as they traverse the rubble and track down Koval. A human-cyborg duo isn’t exactly original, but in theory, Damson Idris and Anthony Mackie could make a good pair. I was mostly unfamiliar with Idris until this film (many probably know him from the TV show Snowfall), but he comes across as an interesting screen presence. He’s fiery and powerful; he can even present himself with the utmost dignity while he delivers some of the film’s more cringe-inducing dialogue. One can easily spot the similarities to his co-star.

Mackie, who we know from a ton of roles at this point, has a certain hardened edge to his performances that he blends with an occasional wink to let us know we can still have a little fun. Here, he’s reduced to yelling at Idris’ Harp in a generically militaristic tone, ending each reply by calling him “rook” or “kid”. In so many cases, an android character is difficult to pull off; the balance between humanity and technology is tricky. Here, the issue lies with the aggressive amount of overbearing machismo woven into the dialogue. Mackie’s Leo becomes less of a character and more of a walking cliché. 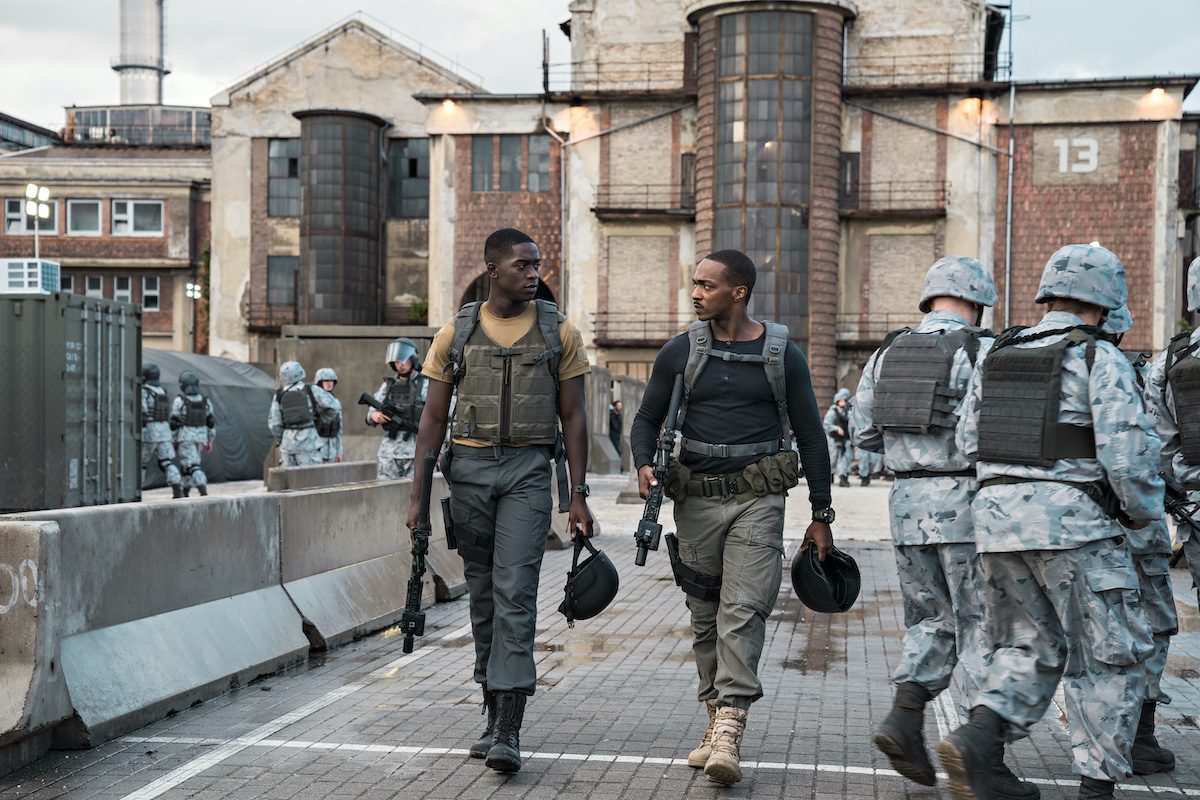 The script (penned by Rob Yescombe and Rowan Athale) does Idris a huge disservice. After the prologue, Harp is reduced to an audience surrogate for a large majority of the first and second acts. His character rarely has agency, and he hardly ever does anything useful for the mission. He’s mostly there to tag along with Leo for reasons that become increasingly contrived and convoluted.

However, the action is where the film falters mightily. For a movie that advocates for peacemaking, Outside the Wire sure does love a good headshot. And believe me, I do too! But the context is key, and the film’s themes and bloody violence do not mesh one bit. Compounding the problem are the depictions of each foreign person: they’re either a one-note, bloodthirsty monster or a helpless victim. While characters may sermonize the need for the U.S. to do better in combat (or even pull out altogether), the action spouts nothing but American exceptionalism.

The choreography itself is mostly passable, although a few extra dollars would have helped. Håfström employs a few noticeable tricks to help the effects look slightly better, such as a digital camera shake when a gun is fired, quick cutting, or an extra layer of soot to cloud the surroundings. The unintended consequences are a few action scenes that are slightly incoherent or just too gray to look interesting. All the rubble starts to blend together after a while.

Outside the Wire‘s third act becomes more implausible by the second. One reveal contradicts the reveal before, everything about Leo’s consciousness gets more confusing, and the entire film begins to run together. Throw in a doomsday countdown, and that’s a wrap.

It’s certainly not the worst Netflix action film (that honor belongs to The Last Days of American Crime), but I left it wishing I had more fun. Netflix has a slew of self-serious original action movies, and most of them feel like a chore to sit through. Outside the Wire could learn a thing or two from The Old Guard about combining bloody action with playfulness.

Thank you for reading! What are your thoughts on Outside the Wire? Comment down below!

Nope! We stopped giving ratings on reviews awhile back. We’re hoping to put the focus on the criticism rather than the score ;)

But if I HAD to give a score, I’d probably fall in line with you, or a little lower. :)

Makes sense. Well, I did say it was marginal. The Last Days was solidly one star (poor), whereas Outside was watchable but instantly forgettable.

Even thinking about The Last Days of American Crime makes my skin crawl ;)

The Amazing Cast of ‘The Hunt for Red...