‘The Midnight Sky’ Reaches for the Stars But Falls Short

What Does Hollywood Have Against 2049?

2049 and three weeks after what is referred to as “The Event”, humanity faces extinction, except for the extravagantly named Augustine Lofthouse (George Clooney), who has remained at his post in an otherwise abandoned Arctic research base. Lofthouse is terminally ill and prepared to quietly see out his last days in isolation when he discovers the mysterious Iris (Caoilinn Springall), a child who seems to have been accidentally left behind when the base was evacuated.

Augustine finds that a spaceship looking to colonize the galaxy is returning to Earth, its crew unaware that Earth has collapsed in their absence. Unfortunately, his communications equipment isn’t powerful enough to warn the astronauts in time, so he and Iris must make the arduous trek to a second station with a more powerful transmitter.

The Gravity Of The Situation

The Æther, the spacecraft that´s mankind’s last great hope, is crewed by an ensemble of great actors. Couple Felicity Jones and David Oyewolo are expectant parents piloting the ship alongside family man Kyle Chandler, junior crew member Tiffany Boone and fatherly astronaut Demian Bichir. For most of the runtime, they have no idea of “The Event” so, their plot is space travel and the visuals are beautifully done. The massive yet intricately designed ship gliding through the starlit void is nicely accompanied by Alexandre Desplat´s score.

Clooney obviously learned a lot from his time on Gravity, which if anything is a problem here. Gravity had Sandra Bullock´s oscar-nominated performance to hang the scenery on and bring some emotion to proceedings. Here, the Æther is sterile and cold, and its crew, a Neil Diamond singalong aside, have similar issues. The attempts to humanize the spacefarers via virtual reality messages from their families seem forced. “Look, he has kids, so you better care about him.” (Although to be fair, Miriam Shor is excellent in her brief scene as Chandler´s wife.) 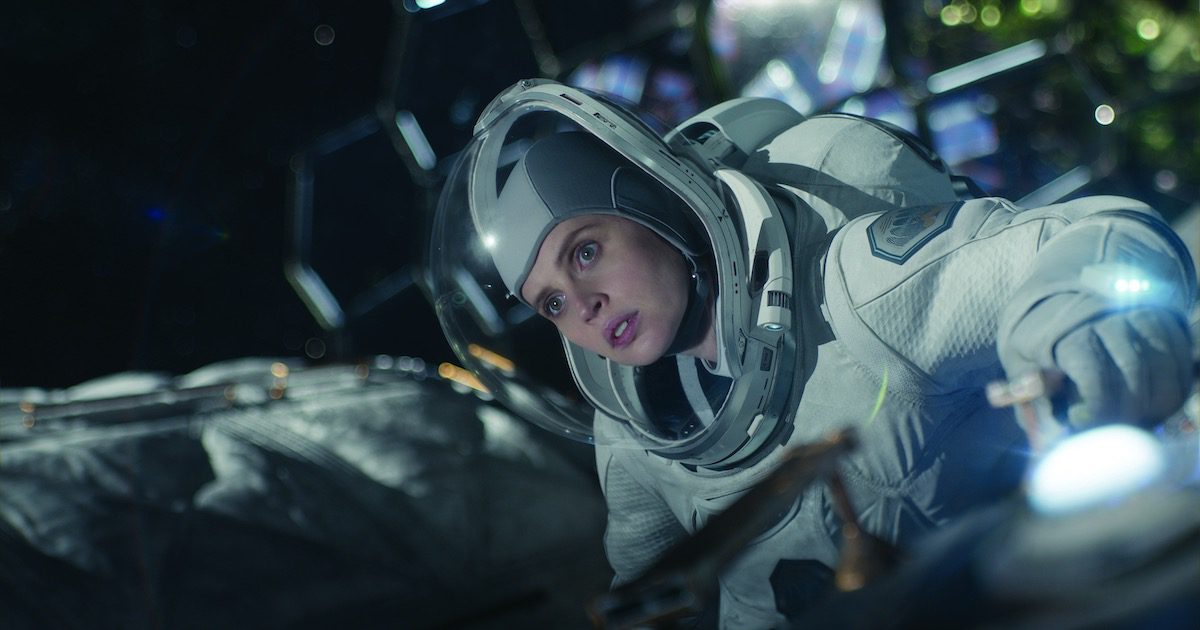 There’s an old screenwriting adage “show, don’t tell”. Sometimes though, you do need to explain things to the audience. Particularly if it´s a sci-fi concept. The problem in The Midnight Sky is it never knows which bits to explain and which bits to not laboriously spell out. “You want to be an explorer, Augustine. To discover new worlds, to give life some hope. But while you’re doing all that, your own life is just slipping away” is far too on the nose to be delivered as dialogue. Trust the audience a little.

“The Event”, on the other hand, is so vague that you have no idea whether the reaction to it is realistic. At times it seems crazy that Augustine’s fellow scientists would leave the base if things are so bad elsewhere on Earth. Yes, you want to be with your family but if not if they’re dead. Which it’s possible everyone is? From…something?

A Tale Of Two Settings

The plots of “George Clooney traversing the Arctic” and “Spaceship returning to Earth” are mostly completely unconnected and of the two, the Æther’s troubles are much the superior strand. There’s a spectacle and also a danger to the space scenes that are curiously missing from the polar ones. For the Arctic, it never really looks cold, and one particular action sequence jumps the leopard seal by having Clooney put in a position that would be absolutely unsurvivable in real life, without him really suffering ill effects.

Still, both main settings are much better than the awkwardly performed flashbacks to Augustine’s youth that kill the momentum of the film stone dead. Luckily there aren’t too many of those.

Ultimately, throughout the film, you will be reminded of other, superior takes on the scenes here. The aforementioned Gravity, Ad Astra. The snowy survival of The Revenant. The “man and child against the apocalypse” of The Road…all of these are called to mind and all are probably better uses of your time if you haven’t already seen them. Very little of it is bad per se, but it often feels like it’s not quite hitting the target it’s aiming for.

A star-studded cast featuring David Oyelowo, an imperiled space ship, a Netflix release…and an averagely written result with an IMDb rating of 5 and a half. The Midnight Sky isn´t quite as bad as The Cloverfield Paradox, but it’s far from a rousing success, and a long way from director/star George Clooney‘s best work.

Thanks for reading, and listening! What are your thoughts on The Midnight Sky? Comment down below!

Disappointed in my man George :(

I really wanted to like it. I’m desperate for an exciting or at least good disaster flick. This was not that. So much was frustrating, or a rehash, or trying hard to be “deep” and “meaningful”. It wasn’t a totally wasted near-two hours – I wrapped presents while watching – but I’m glad I didn’t pay anything above my Netflix subscription cost. I’d be irked.