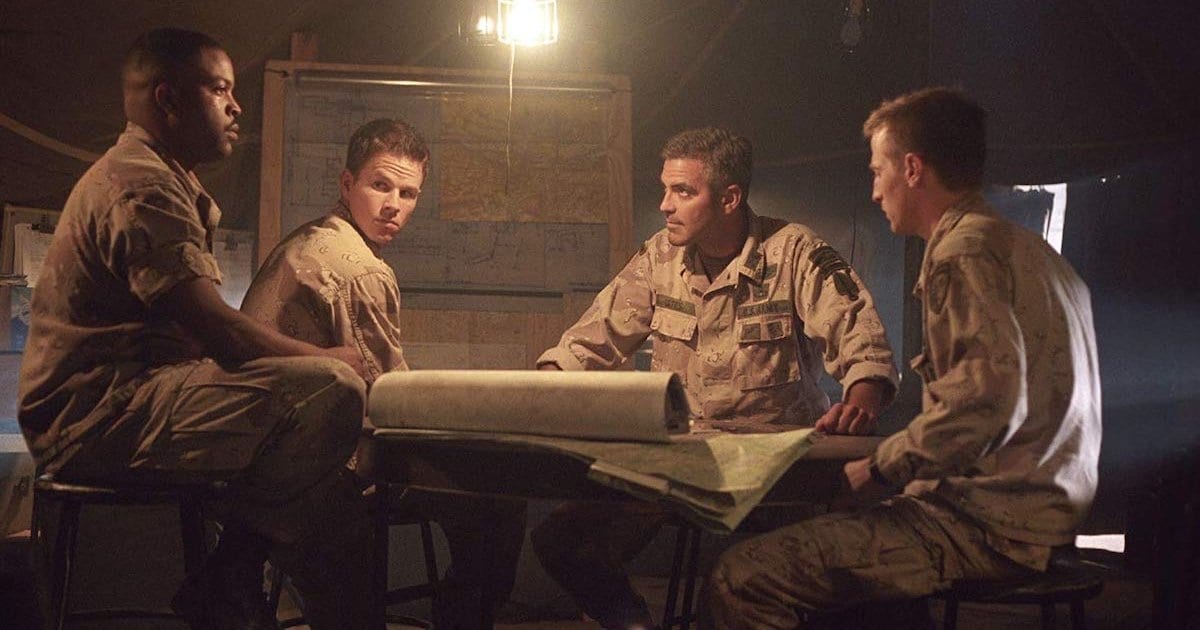 It has been 20 years since Three Kings (1999) (which should be called Four Kings because there are four main characters, but I digress) came out in theaters, yet it has managed to stay relevant in a time of ongoing Middle Eastern crisis. Without getting too lost in the weeds, Three Kings provides a narrative for all sides of the conflict while moving the story ahead. Though this topic has been talked to death by now, this particular narrative stands out among all.

George Clooney, Mark Wahlberg, Ice Cube, and Spike Jonze star as four soldiers looking to steal some Kuwaiti gold now that the war is over. However, retrieving that gold turns out to be much harder than they thought it would be. Along the way, they form friendships and dive headfirst into the culture of the Middle East. The film itself is a great way to gain empathy for all those involved in the ongoing conflict.

Boys in the Army

I love how war or military movies most always portray the soldiers as they really are: boys. This is most evident in the first few scenes of Three Kings, which take place immediately after the Gulf War has ended. To celebrate, the soldiers are dancing, partying, and drinking even though none of it is allowed. Most of them are lounging around in various states of undress and Major Archie Gates (Clooney) is even getting a little lucky. Basically, just normal things you would find at a frat house or rowdy high school party.

However, that’s not the only thing that Three Kings accentuates. It also shows the vast variety of people you will find in the army and in life in general. Troy Barlow (Wahlberg) is a little older, maybe mid-twenties, and has a wife and child awaiting him at home along with a boring day job. Chief Elgin (Ice Cube) is also older and very religious to the point of praying multiple times a day. Conrad Vig (Jonze) is a backwoods country boy who barely got out of high school and lives in a group home because he’s not that bright. Archie Gates is just an older guy about to retire, fed up with the army and all its regulations.

Because we get to know these soldiers, we have a lot more empathy for them and the decisions they make. Conrad is often blatantly racist, but we can understand because he really doesn’t know better. We question Troy’s motives but we realize he really only wants to provide for his wife and child. Gates is only trying to make a quick buck before he retires — he has nothing to lose.

After the soldiers raid the village of Saddam Hussein’s stolen Kuwaiti gold, they attempt to leave but stall for a moment as some Iraqi soldiers enter the village and begin wreaking havoc. Troy does not want to engage the soldiers and save the rebel villagers because he has a family at home. However, since Gates has nothing to lose, he chooses to save the rebels; Troy reluctantly follows along with Elgin and Conrad.

Because of this, Gates has a change of heart and agrees to help the rebels reach the Iranian border, where they will hopefully be safe in a refugee camp. Once again, he has nothing to lose. Elgin goes along, being a religious man and knowing that what is put in front of him is right. Conrad goes because the rebels agree to help rescue Troy.

The most enlightening part of the movie comes from Captain Saïd, an Iraqi soldier who tortures Troy. At first, we hate him for the pain he is inflicting on Troy. However, we soon gain at least a shred of empathy for him as he tells the story of why he fights for the Iraqi army.

Captain Saïd tells Troy about how his wife and infant son were killed by American bombs. We’ve heard this sob story before in many different movies, but I really like how Three Kings approaches the issue. The man telling the story isn’t exactly calm and calculated. Of course, he is a trained soldier torturing another trained soldier, but he does so out of a deep, honest rage that we can sympathize with.

Saïd Taghmaoui, who plays Captain Saïd, is beautiful here. For one, he is young, which gives a sense of lost innocence to this tragic character. However, what truly sets apart his performance from every other enemy-is-just-a-man-who-lost-everything cliché is the raw emotion that comes through his lines. His words are profanity-laced and cold, but his voice is soft and it trembles ever so slightly, revealing the pain he is in as he speaks. Director David O. Russell does a wonderful job of coaxing every bit of emotion from the scene.

One of the most interesting characters in Three Kings is Adriana Cruz, a war correspondent played by Nora Dunn. While mostly a minor character that seems to be nothing but an annoyance and comic relief, her perspective and her scenes are telling for the entire situation in the Middle East.

At the beginning of the story, we see her as nothing but a hardened veteran, tired of war and unflappable. She’s angry, she yells at soldiers, and she’s seen it all before. However, there are moments when the emotion cracks through, such as when she briefly cries seeing pelicans covered in oil.

Her most powerful performance comes during the final twenty minutes of the film when she chronicles the journey of the rebels to the border. The excitement and emotion in her voice return because she finally feels like she’s doing something to help. Instead of merely watching the violence and being that bystander, she is finally doing something to help.

I liken her character to the audience who feels that they want to do something but cannot. They simply talk about it, like Adriana does, and then move on. Her frustration mirrors the average viewer’s frustration with their futility.

What I mostly love about Russell’s Three Kings is the different perspectives it gives. You watch through a hardened soldier’s eyes, through a tough reporter’s eyes, and through a scared child’s eyes. The audience is not simply fed one narrative, but rather a whole feast of narratives.

And the audience isn’t meant to choose either. There is good on both sides, both in the rebels and in the Iraqis, shown by the villagers and by Captain Saïd. People die on both sides and people love on both sides.

I think the main value that Russell tries to infuse his film with is loyalty. Conrad was unfailingly loyal to Troy. Gates was loyal and kept his promise to the rebels. Elgin was loyal to his God and took care of the situation placed before him, as he would put it. And the soldiers were loyal to their country. Three Kings is a beautifully underrated film that shows how loyalty to our friends, family, and country is the common thread that unites us all.

Thanks for reading, and listening! What are your thoughts on Three Kings? Comment down below!

[…] Event”, humanity faces extinction, except for the extravagantly named Augustine Lofthouse (George Clooney), who has remained at his post in an otherwise abandoned Arctic research base. Lofthouse is […]

‘Sputnik’ Orbits Your Ethics in this Solid Creature...