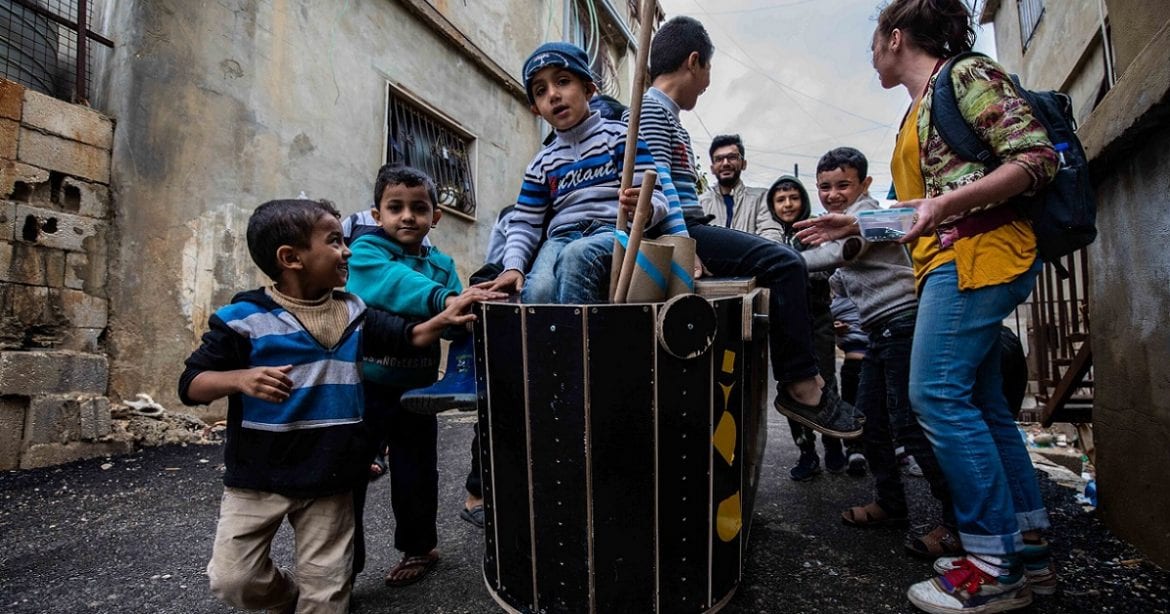 The Wheels of Wonder

Play is a very important aspect of every child’s development. It gets them moving, stimulates their imagination, and helps develop problem-solving skills. This is especially true for children in refugee camps in Beirut, and this documentary follows a team of inspired engineers, designers, and play experts that create a prototype play cart for these children. Described as looking like a bizarre combination of Ikea and NASA, the play cart is filled with hundreds of loose parts for the children to play with, as well as the cart itself which can be reassembled into a portable playground.

Director Roger Ungers really hones in on the details of bringing this cart to life. From the design stage, the trial and error of trying to build a prototype, and to the testing of the cart in schools and refugee camps in Beirut, it’s a fascinating and insightful journey the film takes. Seeing the excitement and joy that the play cart brings the children when they have the opportunity to use it and how thankful the rest of the community are is very heartwarming. Other than the pure joy the play cart brings the children and the community, the refugees have very little voice in this film and its absence is rather noticeable. With very few interviews or comments from these people and its heavy focus on the cart itself, The Wheels of Wonder very much feels like a corporate presentation for the play cart company’s shareholders to invest in this project and less like a documentary film.

Some missed opportunities in its presentation aside, The Wheels of Wonder is still a joyful little documentary that at 68 minutes, is a short and sweet journey into creating happiness for refugee children.

Welcome to Hamtramck, Michigan. A neighborhood in Detroit described as ‘the world in two square miles’. This once-thriving community of Polish immigrants during the American industrial boom was revitalized in the 1990s, becoming home to many Yemeni and Bangladeshi immigrants. Before too long, Hamtramck quickly became the first-ever town with a Muslim majority in the United States. Though a harmonious town that prides themselves on their diversity, the different communities are pitted against each other when it comes to politics. This documentary not only presents a portrait of every life in Hamtramck, but also follows the mayoral and city council candidates from the different ethnic groups of Hamtramck on the campaign trail to the local election.

By centering the film around the local election, Directors Razi Jafri and Justin Feltman are able to explore Hamtramck and its diverse and multicultural population with an incredible amount of detail. It is through the mayoral and city council candidates that the issues in Hamtramck and their personal visions to make it a better place are addressed and realized. There’s Karen Majewski, the mayor of 12 years up for re-election, adamant she can still represent the people in the wake of the town’s aging Polish population and rising Muslim population, but also advocates for equal representation in her government. Her opponent, on the other hand, Kamal Rahman is a community activist whose grassroots campaign is gaining momentum with promises of free college tuition and reducing water bills. Then there’s Fadal Al-Marsoumi, a charismatic, caring 23-year-old city council candidate from an Iraqi family that looms as a dark horse outsider in the polls. No matter their background or ethnicity, each candidate all strives for the same goal of making Hamtramck a better place that welcomes and is inclusive of everybody.

In the age of aggravated hostility, ignorance, and hatred towards minorities in Trump’s America, seeing a community built by people from all corners of the earth, living in harmony and working together to make it a better place for everybody inspires hope that things can change. Hamtramck, USA is an in-depth and fascinating window into the immigrant experience in America and the politics of identity.

After hearing an IPPC report on Climate Change back in 2014, filmmaker and music producer Tim Cole and his partner packed away their life and a few cameras and microphones into their car to embark on an ambitious creative mission.

He began an audacious multi-platform musical project entitled Small Island Big Song, where he spent years traveling across 16 island nations of the Pacific and Indian Oceans that are on the frontlines of climate change and environmental challenges. Uniting the descendants of the ancient seafarers that voyaged the oceans for millennia, Small Island Big Song shares their stories, history, and wisdom through songs recorded and overdubbed on their custodial land, in their native languages, and with their traditional instruments. The project includes an album, a live concert tour, and this documentary film.

It is not a documentary in the traditional sense, nor is it simply just a visual companion piece to the album and concert. Seeing these people perform on their native lands truly presents their struggle in coping with the ever-changing climate and why it is vital that these lands must be protected. Seeing them emphatically sing about being thankful for the land or the endangerment of the plants and wildlife in these beautifully serene natural environments not only allows for a greater sense of authenticity as opposed to listening to the songs themselves, but also reaffirms the project’s goal in making a grand musical statement. The decision to mix so many distinct sounds from the different nations could have been a disastrous discordant mess, but they come together beautifully as a perfect symphonic harmony that is most memorable and impactful.

Despite the lyric subtitle translations often being very difficult to read, the glorious and inspiring music transcends language. Small Island Big Song is a beautiful and uplifting visual soundtrack whose songs and stories of these indigenous peoples are a call to arms to protect these endangered lands and combat climate change.

The Rise of the Synths

Finishing off with another music documentary, The Rise of the Synths is an exploration into Synthwave, a genre of electronic music that is gaining popularity and a subculture that is rapidly expanding. Synthwave artists from all across the world are interviewed about the history of Synthwave, how it is intrinsically tied to 80s popular culture (especially cinema), the trope of synthwave artist anonymity and personas to put the music first and how the internet created this movement almost entirely independent from the labels. All of these interviews are linked together with narration by the dulcet tones of one of synthwave’s founding fathers, the legendary John Carpenter in a neon purple room talking into an 80s style microphone.

What’s most interesting about The Rise of the Synths is how the film starts at the present day and then works backward in time decade by decade, ending at the birth of Synthwave in the 70s. It begins by talking about how movies and TV series like Drive and Stranger Things have brought Synthwave mainstream popularity in the 2010s then moves onto how the advent of social media sites like MySpace created an online community of artists and fans in the 2000s and how the culture of the 90s saw a rejection of Synthwave and 80s iconography more generally as it was eclipsed by the meteoric rise of grunge. When the film reaches the heyday of Synthwave that was the 1980s, it is an absolute joy. The faces of every artist that is interviewed (at least the ones that show their faces) just light up with passion as they discuss the impression that films, video games, and music of the 80s had on them and how it informed their music. It only gets nerdier and more impassioned when they reach the 70s as pioneers of the artform such as Vangelis, Tangerine Dream, Goblin, and of course John Carpenter are lauded as the reason they do what they do.

Despite doing a great job at recapturing the Synthwave aesthetic, The Rise of the Synths does go a little overboard with the presentation. The documentary pointedly states that Synthwave is so deeply rooted in nostalgia, but having the framing device being this narrative segment with this character known as the Synth Rider, decked out in cool shades and a leather jacket sporting some Suspiria and They Live neck tattoos, listening to Carpenters narration via the radio in the Delorean he is driving? It’s a bit much. Especially when this character is sucked into an arcade machine when we reach the 80s portion of the film. The documentary also speaks to how underground and DIY Synthwave music is, but there is very little shown or discussed about the actual production of the music, and I wish there would have been more than that.

The Rise of the Synths manages to cover a lot of ground in its punchy 82 minutes and while it still leaves a little more to be desired, it is still a stylish and nostalgic celebration of a truly unique and irreverently cool style of music.

Thank you for reading! What are your thoughts MDFF 2020? Comment down below!

[…] Seaspiracy, Tabrizi dives deep into the environmental impact of the fishing industry. What he claims to have begun as a celebration of the marine life he dearly […]