Is Kevin Costner’s Robin Hood a Prince or Just a Thief? 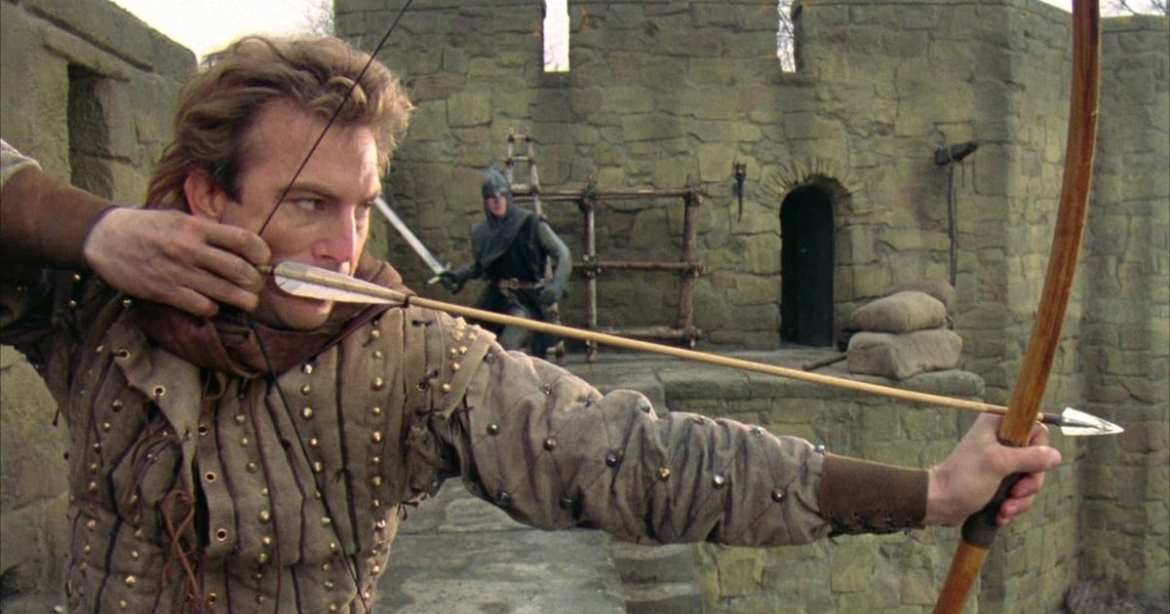 As attractive as Kevin Costner is, his portrayal of Robin Hood should not be considered a hero. Robin Hood: Prince of Thieves is just a two-hour-long crime movie. Much like the characters in Goodfellas or Heat, this version of the classic character is not someone to root for. He’s a thief and a murderer.

His motives are clear and I understand why he felt crime is necessary, but did he really go about it in the right way? Is he someone we should look up to?

Robin Hood: Prince of Thieves begins in Jerusalem where Robin (Kevin Costner), his friend, Peter (Liam Halligan), and several other English soldiers are held as prisoners of war following the Crusades.

While it’s touched on several times throughout the film, the moral ambiguity of the Crusades isn’t fully explored. While viewed as a “noble” effort then, the idea of soldiers fighting to force a religion on a group of people is problematic at the least now.

This is where our “hero” originates. Costner’s Robin Hood references his noble service a few times throughout the film, which doesn’t give very solid ground for our hero to stand on. If anything, it just portrays him as a mindless soldier intent on fighting and killing.

Robin Hood Is a Murderer

Fun fact: out of numerous actors who are mainly known for playing action heroes, Kevin Costner actually ranks quite high when it comes to the number of kills. Surprised? You wouldn’t be if you realized how many men that Robin Hood had killed in Prince of Thieves.

Look, I’m all for heroes avoiding the charade of not killing people to maintain the guise of purity. It speeds up the plot and keeps things moving. However, Robin Hood is a child’s fairy tale and someone they look up to, so having their hero murder numerous people just seems wrong.

When we move to the Sherwood Forest encampment, Robin’s murders really ramp up. Rather than engaging in scare tactics or non-lethal fighting, Robin orders his cronies to murder the Sheriff of Nottingham’s (Alan Rickman) soldiers. Whether they deserve it or not, that’s not very hero-like behavior.

Look, I know there are dozens, perhaps hundreds, of movies portraying thieves as good guys. Ocean’s Eleven comes to mind. And while that’s all well and good for a movie, it’s important to note that robbery is still against the law and shouldn’t be something one is proud of.

The Robin Hood legend has always been about wealth redistribution. It’s just the fact that throughout Robin Hood: Prince of Thieves, Robin begins to enjoy the thievery. He laughs as he steals from the Sheriff’s soldiers and as he commands the villagers to kill them. At least show a little remorse, my man.

He thinks himself to be the best archer in the land. While true to an extent, his arrogance about his skills is infuriating. He makes fun of a child who cannot hit a target while being deliberately distracted by Robin. Yet, Robin himself falls victim to the same embarrassment, wildly missing a shot when Maid Marian blows on his ear. Putting aside how dangerous it is to miss a shot like that with people around, it rightfully makes Robin look like the arrogant bastard he is.

Quitting My Job as Devil’s Advocate

Alright, now that I’ve gone through everything that makes Robin Hood an insufferable character that no one should root for, let’s go through why he actually is a character you should root for. That’s right, friends, I can see both sides of this coin.

One thing that sets Robin Hood apart from the rest of the villagers is his acceptance. He has no trouble accepting Azeem (Morgan Freeman) even though he is a Moor. He also has no trouble standing up for his friend when racism enters the conversation.

Additionally, Robin could have chosen to strike out on his own versus the Sheriff and his men. After all, it’s not like the villagers had any experience with fighting wars. Yet, he offered them a chance to fight for what was theirs. You could argue that this is the selfish alternative, as it would mean help in reaching his goal and a lesser chance that he would die. However, considering how independent Robin prefers to be, it was a character-defining moment in his transformation to the famed hero.

Friend of the Little Guy

Robin Hood: Prince of Thieves still seems to resonate (albeit in a vastly reduced capacity these days) for two reasons: Kevin Costner and the desire to ascend that famed social ladder.

First off, Kevin Costner is ridiculously handsome while also being exceptionally bland. He looks like every other generic white guy and yet there’s something irresistible about him. That’s why he’s cast as the everyman in every film; he’s the pretty ordinary guy who ends up being pretty extraordinary.

Additionally, any version of Robin Hood will appeal to audiences who grew up hearing the story. And who is probably told that story more than anyone? The little guy. The ones who grew up without riches and everything they ever wanted. The idea that a better life is in reach will forever be tantalizing.

Thank you for reading! What are your thoughts on Robin Hood: Prince of Thieves? Comment down below!

Yes and don’t ever question it again