‘Black Friday’: The Good News Is It Includes Bruce Campbell, the Bad News Is That It’s Not Very Good

Even with Bruce Campbell, 'Black Friday' lacks that 'groovy' edge. 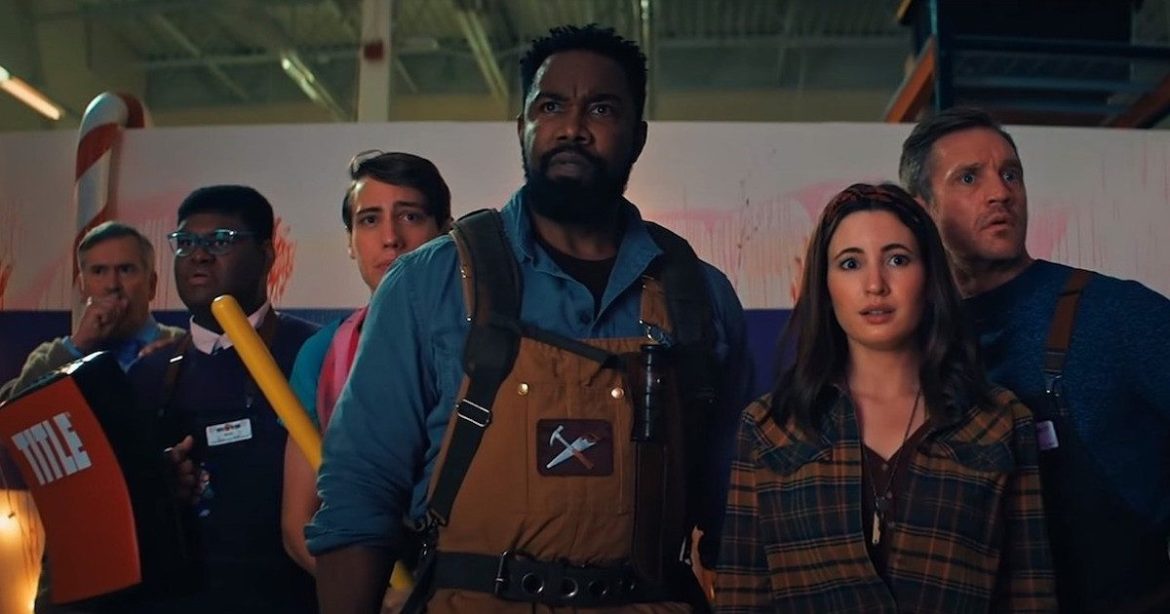 Adding Bruce Campbell to your cast will automatically attract any genre enthusiast. The man is a legend, possibly one of the most charismatic men on the planet. A man so charismatic, I’m seriously considering watching an upcoming Hallmark movie just because he’s in it. I know it’s going to suck, but hey, it’s got Bruce Campbell! At the very least, I can admire his chin for 90 minutes.

Now if your film happens to be a horror-comedy, co-starring Bruce Campbell, you know Evil Dead fans will line up to see it. Having Bruce Campbell in your horror film gives it credibility and even opens the door for cult notoriety.

But having an icon in your film also has an obvious disadvantage. It conjures up the awesomeness of the performer’s persona, which can lead to the viewer having some high expectations. In other words, you need to deliver.

Which brings us to Black Friday. Like many Evil Dead fans, the only reason I’ve even glanced at this film is because of Campbell’s involvement. Though the rest of the cast shouldn’t be dismissed.

Besides Campbell, there’s Devon Sawa. Sawa has made a sort of renaissance of late, such as starring in the unforgettable grisly, Hunter, Hunter, and even having a double role in the current Chucky TV series.

Next to Sawa, there’s Ivana Baquero, who at ten years old, starred in Guillermo Del Toro’s classic, Pan’s Labyrinth. Finally, there’s martial arts thespian, Michael Jai White, who despite appearing in more than his fair share of subpar direct-to-video fodder, always retains his dignity — and like many, I’m still waiting for that Black Dynamite sequel.

Black Friday opens with something crashing down in an undisclosed mall. A mall worker takes a closer and sees that it’s some weird, pulsating goo, possibly of extraterrestrial origin. We quickly see that anyone who comes near it becomes infected and is turned into a ravenous zombie.

We focus on a group of mall workers who are working during the titular Black Friday. There’s Ken (Sawa), a fun-loving divorced dad with a slight alcohol problem; Marnie (Baquero), who often flirts with the much older Ken; Chris (Ryan Lee), a twenty-something agoraphobic who still lives with his parents; Brian, (Stephen Peck), the effeminate but strict assistant store manager); Ruth (Ellen Colton), the senior citizen who makes your casual racist remarks; Archie (Jai White), who looks like he could kick your ass; and finally there’s the store manager, Jonathan (Bruce Campbell), a true company man if there ever was one.

Once the deadly threat infects customers and mall workers alike, the survivors have to band together. But as goes with many such tales, oftentimes the worst threat aren’t the monsters, but humanity itself.

Like many Evil Dead fans, I’m still a little disgruntled with the cancellation of Ash vs. the Evil Dead. One hopes that with his presence in a zombie-themed horror film, that Campbell will show us some shades of the bumbling chainsaw-wielding hero, Ash Williams.

But if you’re hoping for an unofficial Evil Dead spin-off, you’ll sadly be disappointed. Bruce Campbell plays a completely different character than the boomstick-wielding hero we all know and love. The movie makes this point distinctly when a character, during a life-and-death scuffle with a zombie, requests the help of Campbell’s character. In your average Ash Williams adventure, Campbell would take care of this zombie single-handedly, but here, he can only assist by throwing a weapon to the character while hiding from a safe distance.

But it’s still Bruce Campbell. Even while looking like the dorkiest office manager you could think of, bowtie and all, there’s no way he could hide that charisma. Without blind fanfare, it’s hard to deny that Campbell is the best thing in this movie. He perks up any scene he’s in. If the occasional comedic beat works, it’s because of Campbell’s natural timing.

Yet the rest of the cast shouldn’t be dismissed. Sawa makes for a likable lead. Having recently seen some episodes of Chucky, in which he plays a twin brother with very different personalities, his range is undeniable.

The rest of the cast really elevates the thin material. Ivana Baquero is similarly likable in a role that could have easily been forgettable. Jai White is completely underused, though in the few scenes he’s in, he nails it — literally in some cases with a nail gun.

But unfortunately, no matter their efforts, the script remains painfully unimaginative. Black Friday is a combination of everything you’ve seen before. It’s a little of Romero’s Dawn of the Dead, a little bit of Dan O’ Bannon’s The Return of the Living Dead, a little bit of Night of the Creeps, and so on.

Besides some impressive makeup work and the occasional fun gore, there’s nothing you haven’t seen before. Nothing is fresh, everything feels rehashed. (Also, do the infected make eerily similar sounds to that of the raptors in Jurassic Park, or is that just me?)

The fact that it’s unoriginal isn’t even its biggest sin. It would have been forgivable if the humor worked, but mostly it doesn’t. When it does induce the occasional chuckle, it’s because of the hard work of the performers, not the script.

Weirdly, one of the best scenes in the film is when the film dares to become a little serious. It comes during the third act, when the surviving characters sit down in a circle, and realizing they might not make it through the night, they start opening up to each other. While the dialogue is often clunky, you do believe every word they say. It also manages to give one-note characters just a little more depth.

Unfortunately, this scene comes way too late to really make you care for them.

The occasional jabs at corporate culture as well as its lack of empathy toward retail workers are commendable, but again, it’s nothing you haven’t seen before — especially if you watched one or two episodes of NBC’s Superstore.

Black Friday certainly isn’t a complete waste of time. It’s obvious that this film was made by lovers of genre cinema. If the script was stronger, had more bite in its attack on corporate culture and if the characters were better written, this could have turned into the cult gem it so desperately wanted to be.

Thank you for reading! What are your thoughts on Black Friday? Comment down below!

The Hallmark movie is honestly surprisingly not terrible. Peter Gallagher too.