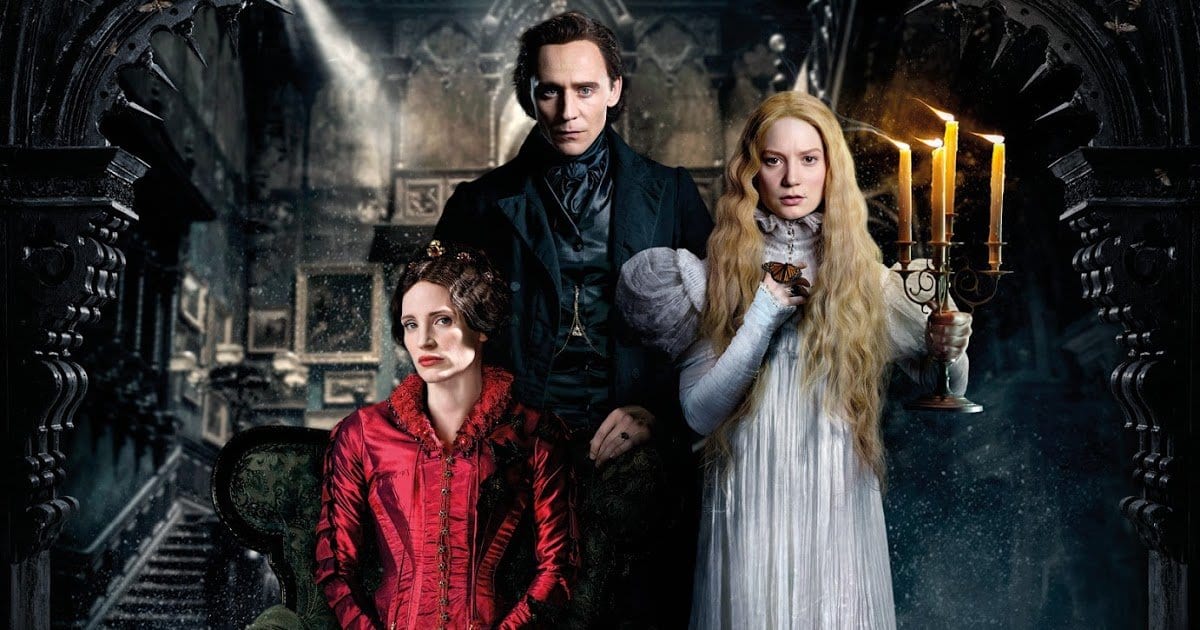 Academy Award winner Guillermo del Toro has a special eye for horror/fairytale films, along with implementing drama involving love. For instance, both of his Hellboy films were love stories with comic book-isms attached. Guillermo does a good job of mixing the two together. Even if the film isn’t horror, he can make a damn good love story with a mute and a 6-foot tall fish-man!

However, there is one film of his that is a romantic horror story that doesn’t work out the way he intended. I’m talking about 2015’s Crimson Peak. The film which stars Mia Wasikowska, Jessica Chastain, Tom Hiddleston, and Charlie Hunnam. Sold as a straight-up horror flick by the marketing team, moviegoers left unsatisfied walking out of it.

I recently took the time to sit down and give the film a watch. Without knowing anything, it was shocking to finish the film disappointed.

(There will be some spoilers for Crimson Peak, so beware.)

For those unfamiliar with the film’s story, allow me to give you the rundown. Edith (Wasikowska) is an aspiring writer but can’t get her stories published. She then meets a man named Thomas (Hiddleston). One thing led to another and they end up together. Oh, and there’s a small detail about Edith…she can see ghosts!

That took a few seconds to take in, right? But it takes the film the entire first hour to get to it! Edith moves in with Thomas and his sister, Lucille (Chastain). The house they stay in is this huge, spooky but beautifully gothic house that could use a fixer-upper. (There is a gaping hole in the roof in the middle of the entrance.)

Following exposition, Edith meeting the ghost of the house, we get a grand twist! Edith walks into Thomas and Lucille making love to each other! Dun…dun…duuunn!!! That ghost Edith met, that’s Thomas and Lucille’s mother. The finale is what the whole film should have been. It’s filled with suspense and thrills that almost makes up for the first two acts being a snore fest.

Guillermo is a great storyteller, he’s proven it before, but Crimson Peak faults to being a dull, slow-paced, and not slightly thrilling romantic-horror film. It’s nothing but talking…and a little horror. Edith sees the ghost a good five times.

It’s not just the story, it’s the characters. Everyone is one-dimensional and doesn’t feel all that important. Our protagonist Edith doesn’t have an arc at the end of the film, she’s still the same person she was at the start. Thomas has moments where he’s interesting but it doesn’t get any better than that. Lucille is just uninteresting all throughout, so there’s no point of touching on her character.

Also, if you think the ghost plays a big part in the film, it doesn’t. The ghost is just there to warn Edith, but nothing too life-changing. It’s as if they needed the ghost for some type of horror to be in the film at all. If you take away the ghost entirely, it would be the same film. 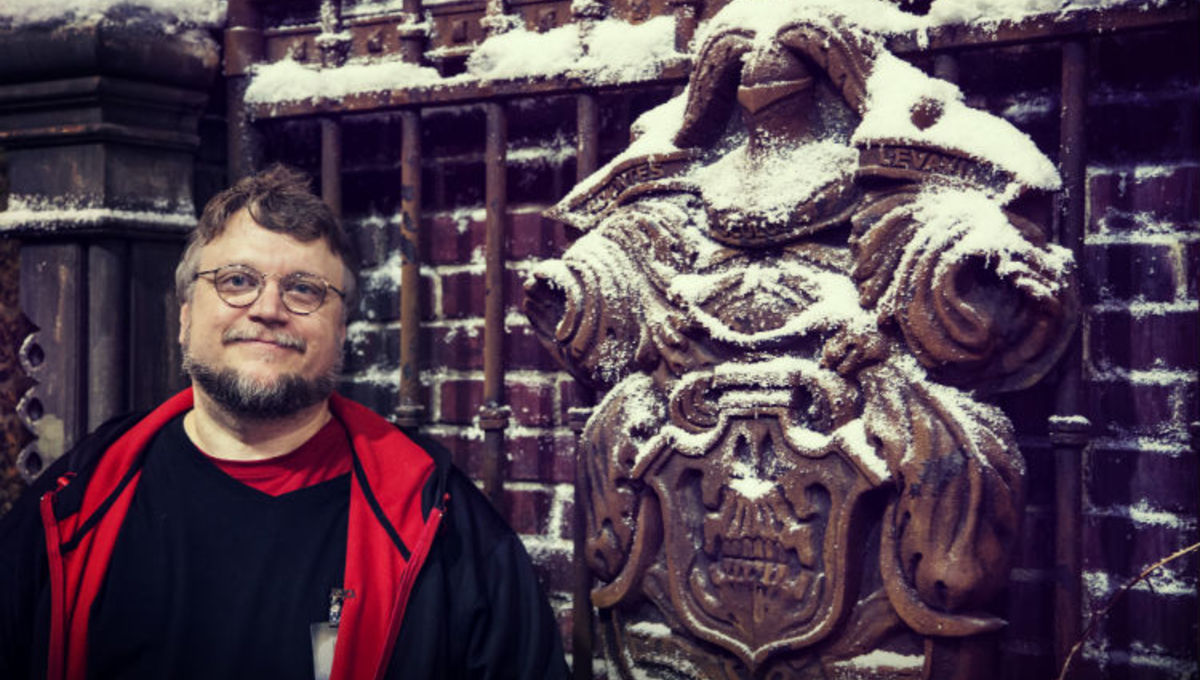 Much like the ghost, the performances are lifeless. Mia Wasikowska’s character is pretty flat and her performance matches that. There’s no true connection between the audience and Edith as a result. Edith is a big, whiney baby from start to finish. It gets tiring quick.

Tom Hiddleston’s Thomas is at least interesting. When on screen, eyes are on him. He’s definitely an attention grabber, but his performance stinks. It’s pretty boring, much like the others. He even delivers his lines in a peculiar way. For instance, in a scene where Edith is shook from the ghost, he offers to go to the post office for some fresh air in the morning. Yes, the film has dialogue like that.

Then we have Jessica Chastain’s Lucille, who is just there to be there. She does give a good attempt at a villainous performance but it doesn’t come through. She doesn’t have a lot with which to work, as she’s introduced in the second hour and we’re shown that she “loves” her brother. 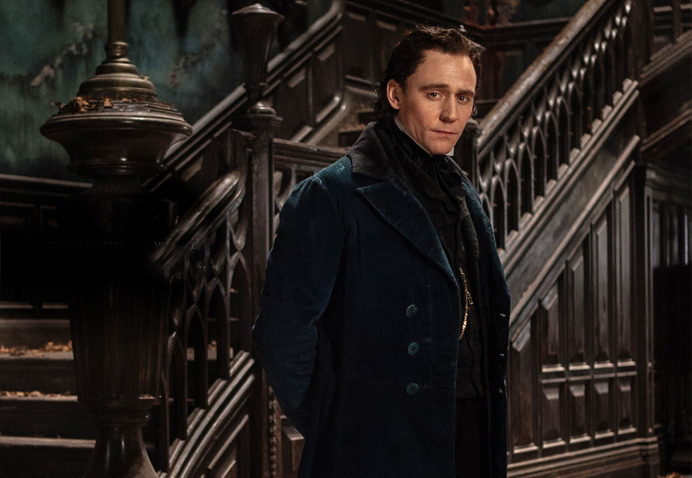 The film has its goods to go with the bads. The concept of it all is good, for instance. A woman who can see ghost falls for a man who secretly loves his sister. It’s original, odd and new, but it shouldn’t be a slog.

The production and costume crew go all in here. Everything looks amazing, from the design of the interior of the house to the dresses and suits they wore. The house is huge and spacious, except for the halls. (It can’t be a horror film without narrow hallways.)

Guillermo plays a big part in the production, as he wants everything perfect from his eyes to the big screen. The design of the house, the colors, and the atmosphere is something that only Guillermo del Toro would create. The overall look is simply  something to behold.

A lot of aspects could have been taken out or fixed and it would’ve made for a better film. For sure, the pacing is a huge problem, that itself could have been fixed by cutting out a lot of the fat. The writing could have used some tweaking. (Maybe have the characters be interesting and engaging for a change?) Edith needed a character arc as well. And there’s no point of having a ghost; that should have been written off entirely. A straight-up romance would’ve been the best route.

But who am I to judge? He followed-up this mess with a little film called The Shape of Water. Maybe you’ve heard of it?

Thank you for reading! What are your thoughts on Crimson Peak? Comment down below!

[…] will have a big-screen adaptation that honors and lives up to the beautiful horror of the novel. (Guillermo del Toro has said that he would be interested in adapting Frankenstein as it is his favorite novel of all […]

[…] is my favorite genre; I have always really loved werewolf films, I’m a sucker for gothic horror (Crimson Peak is one of the most underrated films of the 2010s), and I love me some practical gore effects. So […]

I found this film incredibly boring.

Interesting review! I think that his weakest movie is Mimic, though. I enjoy Crimson peak when I watch it, especially thanks to its colors, sets, and atmosphere. It may not be Del Toro’s best movie, but it’s still a treat for me!