Why does 'The Cabin in the Woods' still have so much of my attention 10 years later? 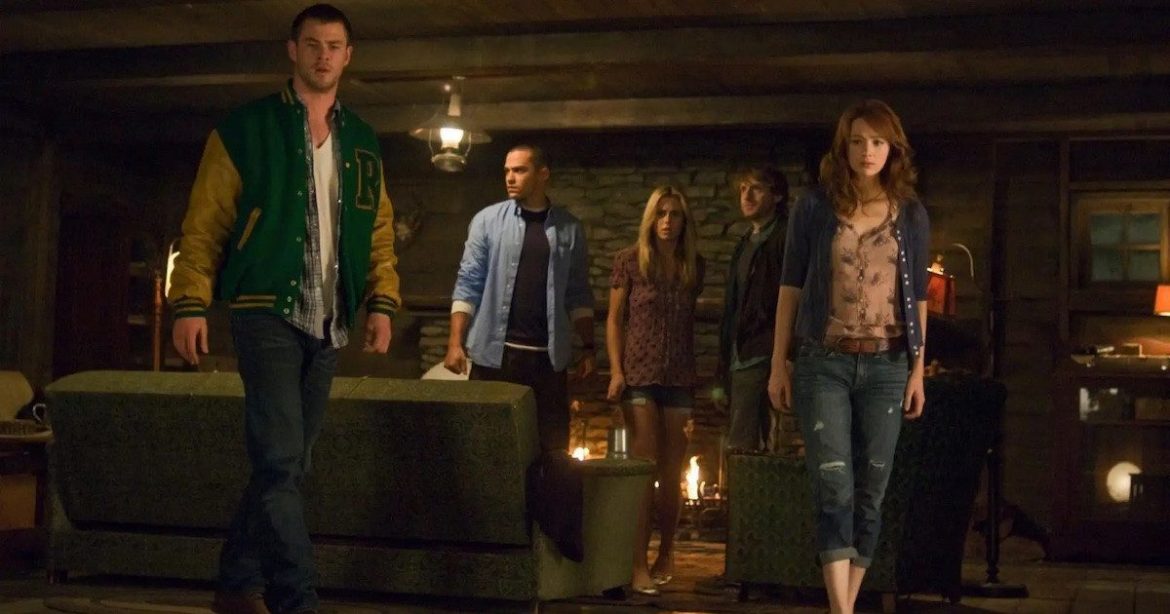 The Cabin in the Woods is probably my most-watched film of all time by now. It’s the perfect film for any occasion. There’s so much that makes it rewatchable every year, and as time goes on, it continues to age like fine wine. The early 10s were filled with many reboots and sequels within the horror genre, and while some are still fun to revisit, a lot are forgettable. The Cabin in the Woods is one that just never seems to leave my mind.

The Cabin in the Woods is primarily set in..well…a cabin…in the woods. A group of college students is about to go on vacation to a seemingly normal cabin located miles away from civilization. Exactly how every film in the “haunted cabin” sub-genre starts. What they don’t know is that they are a part of a monitored yearly ritual that will end in human sacrifice. A monster, unknowingly chosen by the group, is unleashed into the grounds of the woods and kills off the characters one by one.

The group’s every move is watched by workers in an underground laboratory which is commanded by Gary (Richard Jenkins) and Steve (Bradley Whitford). They can control the cabin and alter the students’ responses by releasing intoxicating drugs into the air. Marty (Fran Kranz), one of the group in the cabin, is constantly high and the drugs in the air don’t affect him. He’s the voice of reason and provides an ironic commentary throughout.

While the group is playing a game of truth or dare in the cabin, Dana (Kristen Connolly) is dared to go down into the basement. When down in the basement, she is met with countless artifacts, and each artifact correlates to a monster that could be unleashed. The workers in the laboratory put on bets to guess which monster the group will unleash, almost to ease the guilt that they orchestrate a killing spree of five innocent people every year. Dana picks up a diary and reads out some words in Latin, which releases zombies. The zombies then start making their way up from beneath the soil outside, all armed with weapons to kill everyone. Absolutely crazy right?

Below the earth is a group of god-like beings that rule over humanity. They are the ones that live off of this yearly sacrifice. The gods must be given five sacrifices or hell will break loose. All five sacrifices are significantly different and distinguishable character stereotypes. They’re based on typical horror archetypes, and have to be killed in a certain order for the ritual to be completed correctly. It is utterly crazy, but somehow makes extreme sense, especially after watching the film as many times as I have.

The gods are known as The Ancient Ones and have the capability to put a complete end to humanity if the sacrifices aren’t complete. Countries all over the world take part in the ritual, and it usually goes to plan. However, this year all but Japan and America have failed. Japan soon becomes a failure, so it is down to the Americans to make sure the gods under the earth don’t unleash hell and ultimately end the world. As for exactly why…it seems that The Ancient Ones have been doing this since the beginning of time, and is seen as a kind of worship from humanity. Sigourney Weaver is somehow The Director of the entire American sacrifice process, but ultimately gets pushed into the pits of hell when the confrontation at the end of the film doesn’t go to plan.

The five stereotypes are appropriately allocated across the cast and are easily identifiable. Dana is ‘The Virgin’, Curt (Chris Hemsworth) is “The Jock,” Marty (Fran Kranz) is “The Foo,”, Holden (Jesse Williams) is “The Bookworm,” and Jules (Anna Hutchinson) is “The Whore.”

The order of killing is as follows:

There’s always the “dumb blonde” who has to be killed first in any stereotypical horror. In this case, it’s Jules, who is branded as “The Whore,” and has recently dyed her hair blonde. Jules is the first victim, and is killed conveniently just after stripping down to have sex in the woods with her boyfriend Curt.

The next victim can be any of the group, as long as it isn’t “The Virgin.” Dana must suffer, but her death is optional. If she is to die, she has to be last.

At the end, all the cast is seemingly dead and Dana has been spared and only tortured a little. Everyone at the underground laboratory is celebrating. What they don’t realize is that Marty has survived. This messes up everything in the laboratory as they need to make sure Dana survives.

Each of the monsters correlates to something that The Ancient Ones find a suitable enough punishment for the sacrifices and are not there at random.

Marty and Dana are able to get into the laboratory as the elevator is connected via an underground system. At this point, they’re slowly figuring out that they were a part of something extremely sinister. They both hide in the elevator control room. In the spur of the moment with no way out, Dana presses the purge button. This inevitable releases all of the monsters into the laboratory. Every monster is unleashed and kills absolutely everyone in the lab apart from Marty, Dana and Gary. Gary is funnily enough stabbed and killed by Dana as her and Marty are trying to plan an escape route.

Marty and Dana meet with The Director and are given a choice. Kill Marty and spare Dana and the world can continue, for another year at least. Or, let the world completely collapse and everyone dies. Such a hard choice! They decide that they will live for the next minute and let the world cave in around them.

The mix between comedy and horror makes The Cabin in the Woods undeniably iconic. In the early 2000s, the Scary Movie franchise codified the horror parody. Scream (1996) was notorious for being self-aware of the genre it’s a part of. Randy makes jokes about how to successfully survive a horror movie and still ends up dead meat. There are very few meta-horrors that manage to get it right. Scream and The Cabin in the Woods are two that do it admirably.

As The Cabin in the Woods is extremely satirical, things are most definitely not going to go to plan. In most horror films, there is a final girl who gets to continue her life as normal (until the next sequel, of course). Dana is meant to be the final girl, but Marty’s survival completely ruins everything. In the end, everyone dies and the whole world deteriorates. There’s the underlying social commentary of horrors having a purpose. If people aren’t sacrificed, the world ends. If Ghostface doesn’t kill a blonde who’s home alone first, then what’s the point???

What’s Next for Horror?

Ultimately, horror will keep reinventing itself. We’ve had another period of a resurgence of remakes and reboots. This probably will continue to till the end of time. So what really is next? A24 is continuously making a name for themselves as making very artistic horror movies, to the point of memery at this point. Blumhouse is always creating fun “not to be taken so seriously” slashers, which I will always have a soft spot for.

Meta-horrors are so extremely hard to come by. It’s rare to make something scary that can also be funny and silly. The Cabin in the Woods manages to be creepy while being comical in a way that doesn’t make you hate it. It is definitely worth the rewatch if you haven’t watched it in a while.

Thanks for reading! What are your thoughts on The Cabin in the Woods? Comment down below!

One of the billion things I love about this film is one of the reasons for failure is people are better than archetypes. The Jock is pretty smart, the fool is the smartest guy in the room the “whore” is in no way that…