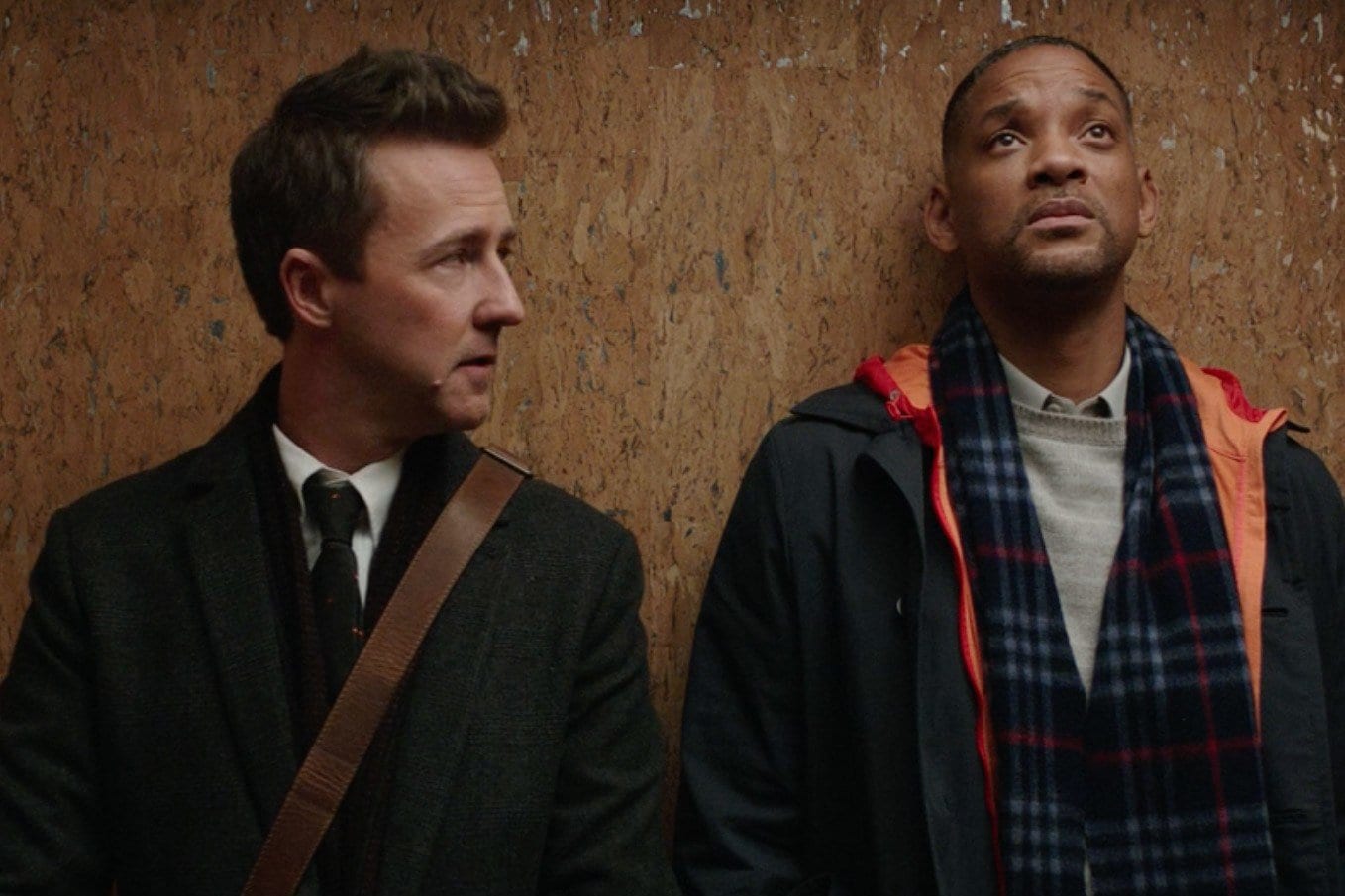 If you’re tired of watching Rogue One for a fifth time this weekend, a great departure from the galaxy far, far away is the best comedy of the year, Collateral Beauty!  This is a movie that tried so hard to be an Oscar contender but failed hilariously.  As always, I will do my best to keep spoilers out of the picture for this Collateral Beauty review.

Collateral Beauty is directed by David Frankel and stars A-list actors such as Will Smith, Edward Norton, Helen Mirren, Kate Winslet, and Michael Pena just to name a few.  Now, to explain the plot of this movie, I do need to start off by saying that the trailers blatantly lied to us.  To explain the plot I will have to give information that was not in the trailers.  So if you believe that to be a spoiler and do not wish to know anything about this movie (but let’s be honest, you don’t care about this movie), then by all means stop reading this review.  None of the information I will give is a reveal as everything I explain happens within the first twenty minutes of the film. For those of you still intrigued, let’s begin!  So the story follows Howard (Will Smith) as he is grieving from the loss of his daughter.  In order to somewhat cope with this loss, Howard begins to write letters to death, time, and love.  However, his grieving is putting his company into financial ruin which causes his three “friends” (Winslet, Norton, and Pena) to hire three actors to play the roles of death, time, and love so that they can come and talk to Howard and get a response out of him.

The idea is that they can digitally remove the actors from video of their interactions with Howard so that the three friends can prove to the company board that Howard is unfit to run the company so they can take the controlling shares of the company by showing them a video of Howard yelling at no one (you can see why they hid this from us in the trailers can’t you?).

Every December it seems like Will Smith is starring in an obvious Oscar-bait movie in an attempt to get nominated.  He’s a great actor, but he takes on curious projects that only damage his career.  From the false trailers we were given, he looked to be bringing his A-game once again. Unfortunately for Will Smith, this Collateral Beauty review declares this film as one of the worst movies of the year.  I’ve never seen a movie try so hard to be sentimental and yet be so inherently mean.  Winslet, Norton, and Pena take advantage of a grieving man in order to be better off in their lives, but the movie props these three up with overly sentimental back stories that attempts to make you try to feel for them as they make a depressed person descend close to madness.

The only thing that saves this Collateral Beauty review from an F -grade is Will Smith’s performance.  He really commits to the role of Howard and would’ve rendered more tears from the audience had the plot not been so fundamentally flawed.  You really care about Howard as he goes through his troubles.  It’s too bad that everyone else is just so damn mean. Everyone else is sleep walking through Collateral Beauty.  Helen Mirren and Kate Winslet look like they couldn’t care less and are just waiting to get to cash the paycheck they are going to receive.  The writing for this movie is so atrocious that fails to evoke any emotion from audience members.  They should have at least tried to develop true emotion from great storytelling like Manchester By The Sea (you can read my review of Manchester By The Sea here).  The way the characters are written wreaks of a Nicholas Sparks novel adaptation.

The pacing of this movie is very laborious as you might expect.  The story moves along with people just doing a lot of talking back and forth while discussing excessively sad topics that had me just looking at my phone over and over again.  The man sitting next to me left halfway through the movie and I found myself feeling jealous.  There’s a twist at the end of this movie that tries to be profound but just comes off as ridiculous and improbable.  I legitimately laughed when the twist occurred.

In conclusion, Collateral Beauty tries so very hard to get the Oscar for best picture, but, in the end, may end up receiving the Razzie for worst movie.  Sorry Will Smith, but Collateral Beauty gets a D-.  You’re definitely better off going to see Rogue One for a sixth time instead.

What should I review next? Whether it’s old or new, the choice is up to you!

[…] Elegy — This film is right up there with Collateral Beauty among the most hilarious Oscar-bait fails of the current millennium. An embarrassment for […]

I enjoyed reading your review, however I believe that Collateral Beauty is the most misread and unfairly condemned film of last year. It is a lyrical essay on grief psychosis that uses magical realism to frame its premise. It has a complex narrative structure and some other issues, but it is a gut-wrenching story that if staged in 17th century costumes would have been seen as a universal fable of Shakespearean proportions.

Even though I disagree (obviously from the review), I appreciate your thoughts! It’s nice to see a completely different perspective on a movie!

I haven’t seen Collateral Beauty, so I can’t argue with you on that. But I think in terms of being taken seriously as a critic, you should really stay away from starting off a review by stating how much you loved the new Star Wars. My trust for your review was immediately dismantled upon reading the first sentence. Rogue One is not a film that should even be mentioned in the same review as a blatant prestige picture such as this. I don’t doubt that Collateral Beauty is a bad film, but your credibility is immediately thrown out the window as soon as you proclaim your love for a massive corporate, studio franchise picture. Especially a film as bland, un-original, and tonally unfocussed as Rouge One. If you can’t spot the obvious flaws in that film, how can I trust you to give a good review on another film.

By stating that you’re tired from seeing Rogue One a “fifth time” I’m obviously joking about the fact that everyone was going to see that this weekend instead of Collateral Beauty. I enjoy Rogue One, but I noticed flaws in it. Don’t take everything I say too seriously this review especially was meant to be tongue and cheek since no one cares about this movie. You see people like Schmoes Know, Jeremy Jahns, and Chris Stuckmann do this all the time. I appreciate the feedback.

Haha….I already had to laugh when I saw the trailer last week in the cinema. Seriously cringeworthy. This is really no surprise at all this review. Even if I got paid, I still probably would not go to this one. Then again, I do like to laugh so maybe I would just go for that ?