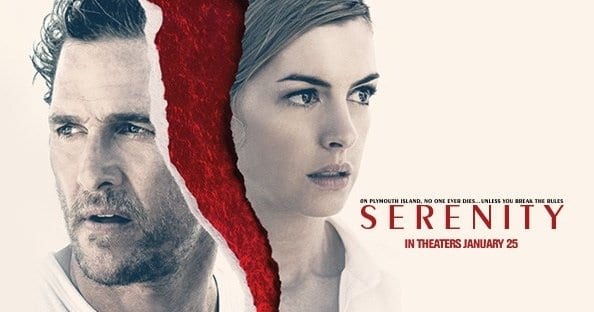 Serenity is a film that I had high hopes for. A strong cast; an interesting trailer; and a quality man behind the camera, this film has the makings for something special, and with that, I was there to see it on opening day. I sat in my seat waiting for the film to begin. Hoping and praying that this was not going to be a typical January feature. What I got… that’s another story.

Fisherman Baker Dill (Matthew McConaughey) is a fishing boat captain who leads expeditions off the coast of a small island. His simple life is turned upside-down when his ex-wife, Karen (Anne Hathaway) tracks him down. Karen (Hathaway) asks Dill (McConaughey) to do her a favor: she pleads that he takes her new, and abusive husband (Jason Clarke) out to sea and dump him for the sharks. Weird things begin happening to Dill (McConaughey) and he soon realizes this all may not be as it seems.

In January of 2017, it was announced that McConaughey and Hathaway would star in a “noir” film entitled Serenity. The film was to be directed by Steven Knight, Knight also developed the story and wrote the script. As pre-production continued into spring 2017 more and more actors were signed on for the film. By summer it was then confirmed Clarke, Hounsou, Lane, and Strong would all be cast in the film as well. Prior to its release, the film had suffered two pushbacks in its release.

A First Act That Held Promise

The film opens up introducing us to Baker Dill (McConaughey). His seemingly simple life, and brutally determined attitude is put on display. His convictions seem odd but nonetheless the way he was introduced built some intrigue. Enter Anne Hathaway. Karen (Hathaway) asks Dill (McConaughey) to do the big favor. Intrigue was most certainly present early on. Knight had created a world for us in which we are forced to see a simple story, or is it?

Jason Clarke’s character is quite two-dimensional, he does his job and he isn’t phoning this one in by any means, but his character was merely generic. Admittedly, both Hathaway and McConaughey do give solid performances. There are moments early on where this story feels like it is building well and moving in the right direction. Despite its “noir” film feel (but in a tropical setting) the movie seems fluid and properly functioning.

What Did This Just Become?

The film unravels with some truly weird scenes, interesting choices by characters, and some weird and choppy editing. Knight had some swell ideas but I mostly felt that the film was lazy at times. Some scenes not only felt very out of place but just blatantly questionable. As it progressed it just got odder, and by the end I had pretty much lost all interest. The ending of this film is what everyone is talking about, and while the build-up in the second and third acts increasingly made that ending more expected, it still fell flat as the progression of the film was weak.

I couldn’t help but literally ask myself why McConaughey and Hathaway agreed to this project. I figured it looked a lot better on paper. The film literally flipped over on itself.

I genuinely believe this film has an interesting premise behind it. That being said, this was definitely a misfire and a clear missed opportunity. It is safe to say each of the main leads in this film are in “lulls” in their career. Or more kindly, quiet spots of their careers. What I mean by that is, we cannot deny that McConaughey or Hathaway will have some huge gigs down the road, but currently they are in a place where their biggest stuff to date is way in the rear-view mirror. With some more fleshed out story and some better dialogue this film could have been something worth discussing. On the point of dialogue, this film has some very weak character conversations.

However, I must give props to Benjamin Wallfisch for what was a strong score in my opinion. 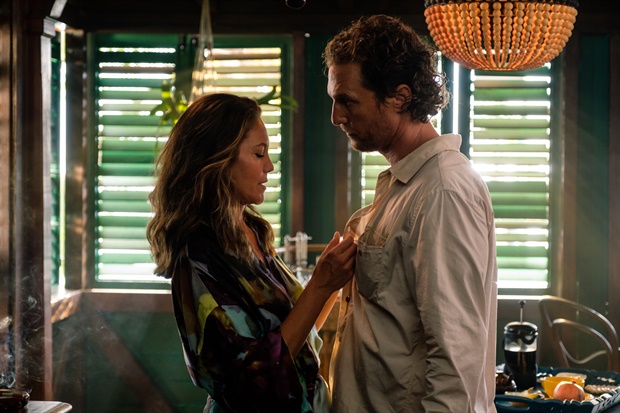 Steven Knight had ideas and I have to acknowledge that, but in execution this film was just messy. Even his attempt at a “sexy-noir” feel was just uncomfortable. The film is convoluted with weird scenes, questionable camera takes, and an ending that turned the film from bad to worse. I would steer as many as I could away from this film, it is not worth it. A shame too as I really, really wanted to enjoy this movie. Skip Serenity for sure, it’s a rickety boat ride you want to miss.

Thank you for reading! What are your thoughts on Serenity? Comment down below!

The actors did their job well, but the entire story is confusing and especially when you realize it all is in the mind of the son of the character played by Matthew Mc. It is weird, and I agree with the comment that it is a waste of time. Diane Lane, a top star is nothing more that a woman who pays for sex with Matthew…small senseless part. You end up with a big question mark in your head and think…really?