‘Brahms: The Boy II’ Is the Sequel Nobody Asked For 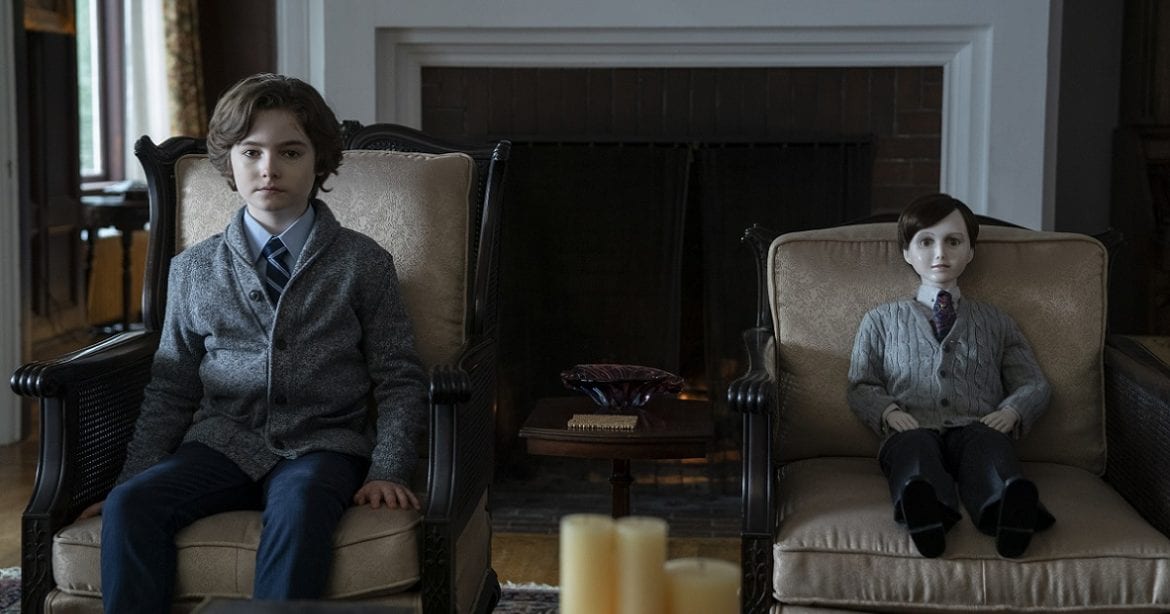 Although it was received with mixed reviews, 2016’s The Boy attracted a reasonable amount of attention thanks to its unusual conclusion. It managed to steer clear of the familiar ‘creepy doll’ horror tropes and was a fairly refreshing addition to the genre. That’s why it’s so painfully disappointing to see Brahms: The Boy II — a title so awful that just saying it makes me queasy – neglect the interesting elements of the first film and adopt a story that is not only nonsensical but incredibly boring.

For those who haven’t seen The Boy, please be warned, there will be spoilers ahead to express the sheer ridiculousness of the film’s sequel. In the first movie, we meet Greta Evans (Lauren Cohan), a nanny who travels to England to look after a boy named Brahms Heelshire. But when Greta arrives at the Heelshire mansion, she discovers that Brahms is, in fact, a Victorian porcelain doll. Left to take care of Brahms as if he is a real human child, Greta begins to experience some disturbing occurrences around the house. Bumps in the night, things (including Brahms) randomly being moved around the house — you know the drill. But just as Brahms’ presence becomes too much for Greta, it is revealed that an adult man who is the real Brahms, has been living in the walls of the house and controlling the doll the entire time.

Got all that? Well, you may as well toss that knowledge in the garbage because Brahms: The Boy II completely abandons the outcome of the first film and dumps an unnecessary story on an audience who never asked for a sequel in the first place. Since The Boy came to a natural conclusion, it seems completely bizarre that this second installment exists. But thanks to the first film’s $68.2 million worldwide earnings, we have been ‘gifted’ with Brahms: The Boy II.

Brahms returns to the big screen once again but this time through the eyes of Jude (Christopher Convery). Jude lives in a plush modern London home with his parents Liza (Katie Holmes) and Sean (Owain Yeoman), but their comfortable lives are disturbed when Jude and Liza are present during a violent home invasion. After the incident, Jude refuses to speak and Liza experiences traumatic flashbacks and dreams. In an attempt to heal the family, they decide to spend some time in the countryside and conveniently settle in a house on the now semi-abandoned Heelshire estate.

During a walk around the grounds, Jude discovers Brahms the doll buried in the woods. As you do when your child brings home a filthy doll, Liza allows Jude to keep Brahms and hopes that a companion will aid his recovery. Although Sean and Liza are initially happy with Brahms as they overhear Jude finally opening up and talking to him in his room, things soon take a more sinister turn. Jude becomes more and more reserved and withdrawn and insists that the family must obey Brahms’ rules. ‘No guests allowed’, ‘Brahms eats meals with family’ and ‘never leave Brahms alone’ being just a few of them.

Liza becomes suspicious of Brahms and starts to experience some strange events in the house. Brahms appears to move around unaided and she discovers some violent drawings in Jude’s notebook which seem to mysteriously disappear when she asks about them. Despite the ‘helpful’ reassurance from Sean that it’s all in her head, Liza is convinced that there’s something wrong with Brahms and that he may be having a negative effect on Jude. As Brahms’ hold over Jude increases, Liza goes into investigative mode and starts to uncover the truth about the doll.

The existence of Brahms: The Boy II makes no sense. But if director William Brent Bell could have at least attempted to make something coherent, then perhaps this car crash could have been avoided. It seems unbelievable that this film was made by the same director as The Boy considering he has completely destroyed the foundations built in his own film. Brahms has gone from being a doll that was being physically controlled by someone else, to evil and possessed — with no explanation whatsoever. The two films simply cannot exist in the same universe. 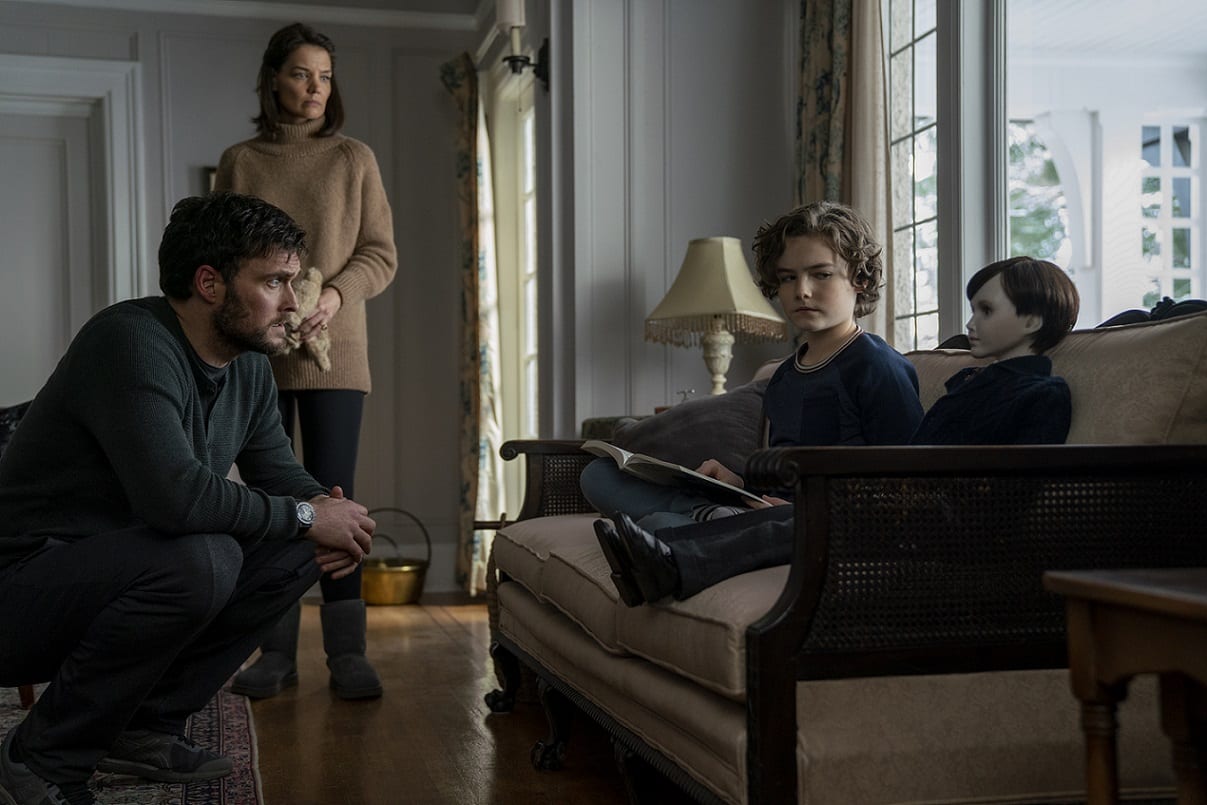 Unfortunately, the movie’s lack of regard for the first film’s story isn’t its only problem. Feeling confused and quite frankly pointless, it’s as if the filmmakers collected all the horror tropes they could think of and jammed them together without constructing a proper story. But even the cheap jump scares and moments that are meant to be frightening have been executed so poorly, that the film is just a boring, lifeless shell of a movie. There’s no atmosphere here, it’s not tense or unnerving, it’s just completely empty of any feeling at all.

In the first film, the spooky sounds and unexplainable movements were scary enough because we weren’t shown what was going on and the mystery was there until the very end. But here, we actually see Brahms move by himself multiple times and it just looks horrendous. From his rolling eyes to the bizarre patter of his feet around the house, Brahms instantly goes from creepy to comical. This also begs the question, if Brahms can move why didn’t we see evidence of this in the first movie?

Careless and lazy decisions also lead the film to suffer. Since the new family lives in a new, cozy, fairly modern house separate from the Heelshire mansion, the creepy atmosphere created in the first film is lost. To make up for the lack of atmosphere, random dream sequences and weird montages have been chucked in in an attempt to make things scarier, but they add zero depth. These lazy attempts combined with some shockingly choppy editing and horrendous CGI, make the film look cheap and quite frankly laughable.

The performances throughout are perfectly fine. It is clear that Katie Holmes, in particular, is doing her best, but the clichéd, embarrassing, lazy script and dull story prevent the actors from reaching their full potential. Throughout the film, you can even sense the cast cringing at some of the lines they have to come out with. Christopher Convery is clearly trying here, but due to an obvious lack of direction and considering Jude is mute for most of the film, he really wasn’t allowed to shine.

Even at just 86 minutes, Brahms: The Boy II drags and feels like an eternity of waiting for something exciting to happen. But the audience is never rewarded, leaving the movie with a complete lack of substance. Bad films can often be forgiven if it is clear the filmmakers at least tried to create something fun or had some sort of vision for what the film was meant to be. But since Brahms: The Boy II is so obviously just a lazy cash grab,  it’s difficult to be sympathetic here.

Thank you for reading! What are your thoughts on Brahms: The Boy II? Comment down below!

[…] crap to watch. Up until this point, I’ve bowed out on a few reported turkeys: Antebellum, Brahms: The Boy II, The Turning, The War with Grandpa, to name a few. For now, below are my choices for the worst […]

[…] as flies on the wall throughout. Possibly, they want to keep the organizers on their side for any follow-up films. A Girls State would be a fascinating […]

[…] it’s truly great. Now if you are one of the poor saps that sat through some combination of Brahms: The Boy II, Fantasy Island, The Turning, and The Grudge, then I understand being a little jaded. Even with […]