Man, I Miss Sports: ‘Bleed for This’ 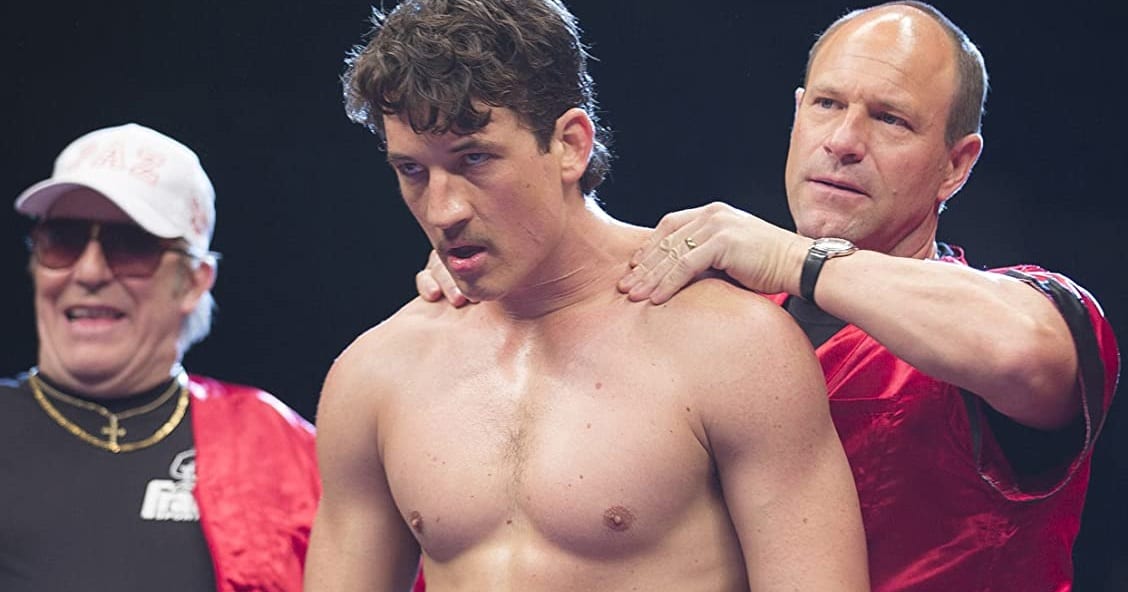 Not to start off on a negative note, but I am not really that big of a sports fan. Please hear me out: this only counts for my real-life hobbies, because I do LOVE sports biopics, especially when they include a good comeback story. As a teen girl, my love for sports movies was sparked by Bend it Like Beckham, and this love was fueled by some more movies telling some amazing stories about some incredible people; sports as their backdrop. A sport I actually do like watching in real life is boxing. It’s a sport I kind of get: the rules don’t seem overly complicated, and the rounds are nice and short, so my attention span can handle it.

So if you haven’t seen Bleed for This (yet), it’s the true story of World Champion Boxer Vinny Pazienza (Miles Teller), who gets into a horrific car accident that should have ended his career, but he’s determined to make a comeback to boxing no matter what.

Being fairly similar to Rocky in tone and, of course, chosen sport, I felt that this modern-day “fighting to fight again” story was exactly the type of movie that would be able to give me my boxing fix.

Bleed for This has a largely small cast, no pun intended. With Miles Teller portraying Vinny pretty much for the entirety of the film, he is mainly complemented by other boxers in boxing matches and of course by Aaron Eckhart playing his coach Kevin Rooney. An honorable mention is in place for Ciarán Hinds as Vinny’s father and original coach Angelo.

Realistically, the movie as a whole is kind of underrated. Bleed for This didn’t nearly get the praise and the viewership it deserved in the moment. As you can see in the stats above, it only just about made its budget back (phew), it hardly received any acclaim from award shows, and reviews are just moderately favorable.

The lack of attraction to the box office is understandable, however, looking at some other movies that came out around December 2016. December is often the month where both Christmas blockbusters are released and where some Oscar contenders are testing the waters. This was most certainly the case in December 2016, where Bleed for This opened only weeks before near Oscar winner La La Land and actual Oscar winner Moonlight. On top of that, the box office that December was topped by Rogue One: A Star Wars Story. So kind of hard to beat in any case.

I picked quite an obvious scene for my favorite sports moment, but it has got to be the final fight between Vinny and Roberto Durán. Even if you know the real story behind this match or the outcome of the fight, it is an absolute pleasure to watch the well-filmed match as we stand behind every single move (punch) Vinny makes.

Aaron Eckhart as Kevin Rooney for sure surprised me. To me, he will always be Harvey Dent. I know, I’ve seen the man do a romantic comedy (Love Happens) and plenty other films, but Harvey Dent in Christopher Nolan‘s Batman movies pretty much permanently turned every Eckhart appearance into “why is Harvey Dent in this movie” for me. This is meant in the best way, he is just THAT good as Harvey Dent. It just also means he will have to live with forever being Harvey Dent, who is now also in these other movies.

Let’s not take this away from how well he captured the role of Vinny’s coach Kevin Rooney. He’s the perfect blend of a concerned coach and sort of a second dad figure. We kind of love him for wanting to keep Vinny safe, but also kind of hate him for wanting to hold him back.

What I’d Take Out

It is really tough to decide what to take out as Bleed for This seems to have stuck to Vinny’s real story very well, and I don’t think the movie included a lot that can be cut altogether. Every scene is quite beautifully thought-out to capture Vinny’s journey and essence in the best ways.

So instead of highlighting what I would take out, let me highlight what I absolutely adore about Bleed for This, and it’s how it is packed with motivational quotes. One conversation in particular between Vinny and his coach Rooney is one that stick out to me; Rooney is getting sick of Vinny not taking orders and looking after his health, and Vinny responds “No, I do. Trust me, I do. I know exactly how to give up. You know what scares the shit out of me, Kev? Is that it’s easy.” Besides the physical challenges Vinny had to face, he truly never mentally checked out or gave up.

That damn painful scene where Vinny gets his halo screws removed from his head and refuses any kind of painkillers. The pain Miles Teller portrays in this scene feels a bit too real. It was definitely the most emotional scene for me as I am simply still traumatized by the fake pain I felt while watching it.

From the year 2014 to pretty much now, I have had an obsession with Miles Teller. If you don’t know why, then clearly you’ve not seen much of his work. I specifically became obsessed with Teller for his starring role in Whiplash; I still think he was snubbed for the Best Actor Oscar, but that’s for another time. Whiplash then made me want to see everything that Miles Teller had to offer. I was more than excited when I heard he was taking on this project.

For sure, I got both my boxing fix and Miles Teller fix. Even though it’s arguably not the best boxing film out there, the plot and performances more than make up for it, and we root for Vinny from start to finish. Bleed for This feels like a classic, even if it hasn’t become one. Yet!

Thanks for reading! What are your thoughts on Bleed for This?  Comment down below!