‘Guillermo del Toro’s Cabinet of Curiosities: The Autopsy’ – Humans are Such Easy Prey…

Stuart Gordon would have loved this! 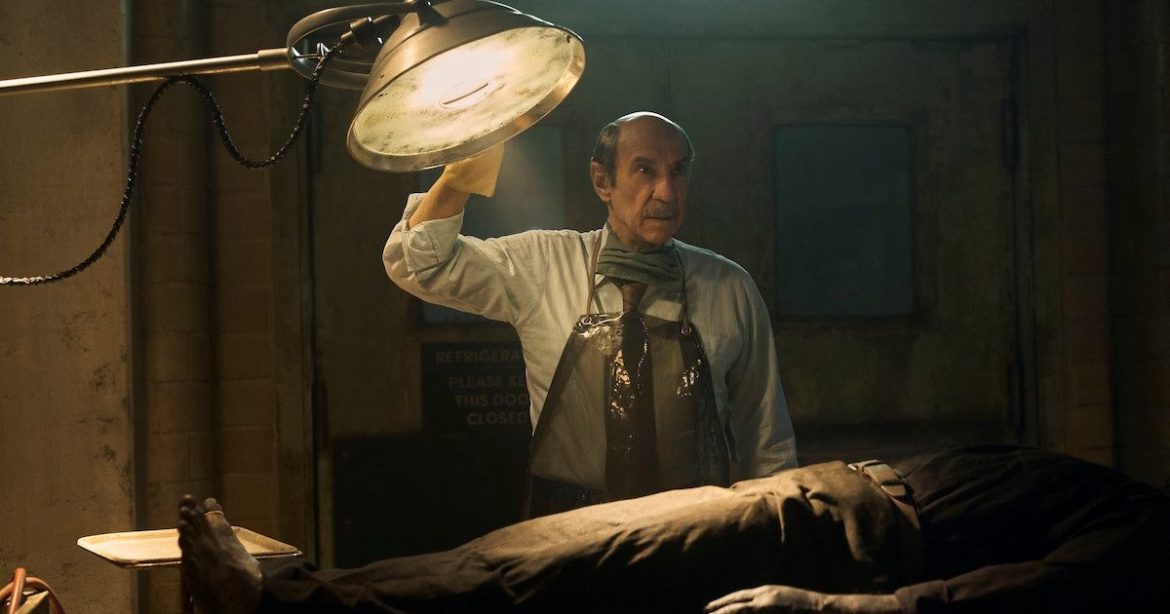 …This is one of those nightmare specials, the kind you never get to the bottom of.

In this tertiary episode of Guillermo del Toro’s anthology show, we receive a terrifying answer to the age-old question: are we alone in the universe? The answer is no… but you’re not going to like what’s out there…

After a mysterious explosion in a mine site that took the lives of ten mine workers, an aging medical examiner, Dr. Carl Winters (F. Murray Abraham), is called to investigate the causes of deaths. Arriving in town, his old friend and local sheriff, Nate Craven (Glynn Turman) informs him of the many eerie mysterious surrounding this tragic incident.

In the first half of the episode, we hear Craven’s side of the story. One that started with multiple murders, of bodies being found without a speck of blood inside them. The suspect in these murders, Joe Allen (Luke Roberts), was also a victim of the mining explosion. There are murmurs that perhaps something supernatural or extraterrestrial is afoot.

In the second half of the episode, we see Dr. Winters investigating the case by performing autopsies on the victims, as well as Joe. The truth will eventually be revealed to him, though some things are better left a mystery.

Guest director David Prior has only directed one feature film so far, but it’s one that makes you understand why del Toro took an interest in him, the 2020 future cult classic, The Empty Man. It’s a flawed but highly ambitious film, that deals with cosmic horror in a way that would make H.P. Lovecraft pee his racist pants. It instantly cemented Prior as a genre filmmaker to watch out for, and his work with The Autopsy is a further testament to this.

Adapted from a short story by the late great writer, Michael Shea, whose own literary work continued the themes of Lovecraftian horror, this episode is the most frightening so far. The eventual monster revealed in this story is not just a physical threat, but an existential one. It’s not just murder one has to fear, it’s your consciousness experiencing all the horrors.

But don’t worry, The Autopsy delivers both intellectual and genre pleasures. This might be one of the grisliest things you will see on-screen this year — besides whatever probably happens in Terrifier 2. If you are a fan of body horror, this is a must-see.

Though many of the effects are CG — I get tired of complaining about this myself — the practical effects, especially when it comes to detailed autopsy scenes, are jaw-droppingly gruesome. The post-mortem examinations are shown matter-of-factly, from close-ups of Dr. Winters making smooth incisions into the front of the torso, opening it, pulling out the chest cavity, taking out the innards, and examining them. Nothing is left to the imagination. The biological machinery is anatomized without a hint of sentiment; though, in a nice touch, Winters does apologize to every one of his human subjects before cutting them up.

However, even with its ennui of cosmic dread and frank depictions of disembowelments, the story is not without humanity. There is ample space for warmth, especially conveyed in the great dialogue scenes — one example is quoted above — between Winters and Crave. Both characters have a slight edge to them, originating from a lifetime of having to deal with either corporate apathy (especially when it comes to an insurance company that will try to find every loophole they can to avoid giving financial restitution to the bereaved) or human evil which one witnesses naturally as an officer of the law. But it’s clear within minutes that they have great respect for each other. They consider each other friends without having to tell each other this. It helps that both veteran performers have great voices, and chemistry to boot. It even made me want this hour-long episode to be feature-length, just to have more scenes of them talking together.

F. Murray Abraham especially shines. I’m used to seeing him play unsympathetic characters, and it’s nice to see him do something different.

Without a doubt, The Autopsy is the best episode of Cabinet of Curiosities so far. Not only that, it might represent some of the best horror fiction of 2022.

Thank you for reading! What are your thoughts on The Autopsy? Comment down below!