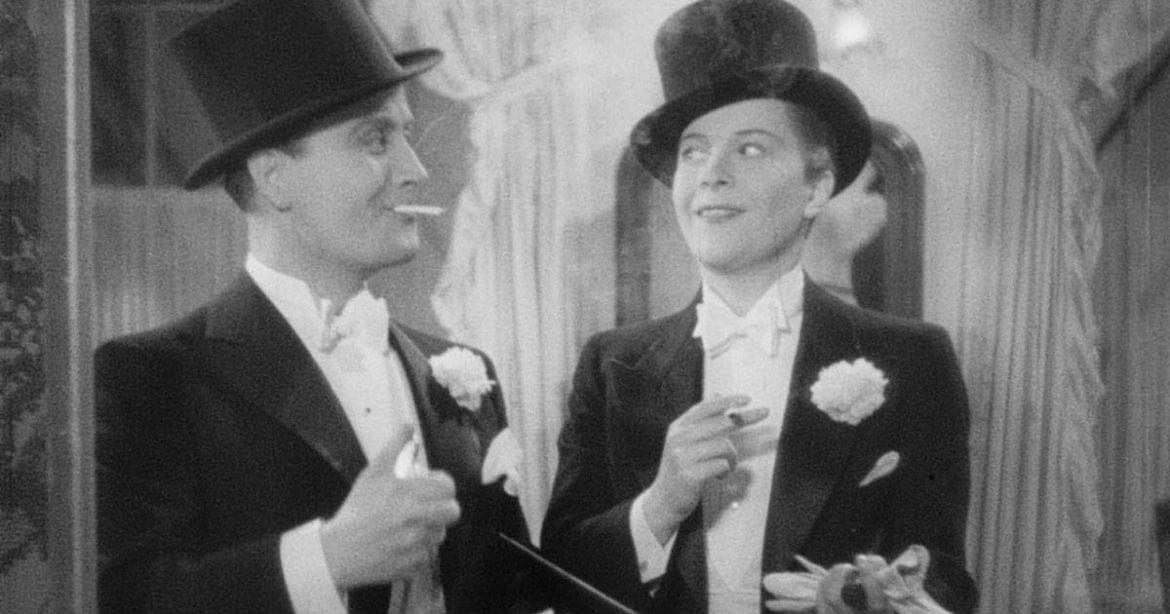 The charming, operetta-style film, Viktor und Viktoria was originally released in its native Germany in 1933. It had a wider release as Victor and Victoria, with English subtitles, two years later. The latter is the version I watched for this article. The story has been reimagined several times, most famously as Blake Edwards’ Victor/Victoria in 1982 (with the incomparable Julie Andrews). Some could argue that films such as Some Like it Hot, and Tootsie were also designed with Viktor und Viktoria‘s blueprint.

Victor and Victoria (the subtitled version) has now been restored, and will be released to Kino Marquee’s virtual cinemas (kinomarquee.com) on June 12th, as part of their Pride Month salute to Pioneers of Queer Cinema. It’s a hilarious film, with a lot to say about gender roles and sexual politics, even if it doesn’t say those things out loud.

Viktor Hempel (Hermann Thimig), a down-on-his-luck actor, makes ends meet by performing as a female impersonator. Viktor crosses paths with Susanne Lohr (the delightful Renate Müller) at a casting office, while both are struggling for gigs. He’s too hammy to get the dramatic roles he desires; she’s too young to be taken seriously.

Viktor takes Susanne under his wing, all the while making exaggerations about his life to impress her (and delude himself). Susanne eventually calls him out on his tall tales, and they forge a friendship with much more honesty. Well, they’re more honest with each other, anyway.

Eventually, Viktor comes down with a cold and cannot perform. He makes a reluctant Susanne go on in his stead, so he won’t lose his income. Susanne’s version of his Viktoria character is an instant success, mostly due to her stunning singing voice (and looks). She soon signs a contract to tour several countries, including a long stretch in England. Viktor tags along, to assist Susanne, yes, but to also reap some benefits of her fame.

To carry on the facade of being a male drag performer, Susanne has to live as a man, whom they call Mr. Viktoria. So, she’s a drag king, making a living as a drag queen. Simple enough, right?

The film’s unusual (at the time) premise allows the actors to play with what is and isn’t considered “manly.” Susanne, professionally known as Viktoria by then (Victoria in England), starts out kind of like a scared little boy (in looks and actions). She has little confidence off-stage, and has a naiveté about her that makes you feel for the character.

As she goes on, Susanne’s Mr. Viktoria persona becomes more of a grown-up. More of what one might consider traditionally male traits/stereotypes. Renate Müller does a wonderful job portraying this evolution.

In the end, Susanne figures out she’s even stronger as herself. It’s refreshing to see a female character so empowered, in such an old movie. She’s done caring what everyone else thinks, and she’s putting her fabulous outfit back on, darn it!

Susanne’s life becomes complicated along the way, when she falls for a socialite type named Robert. He is played by the dashing Anton Walbrook, credited here with his original name, Adolf Wohlbrück (which he wisely changed later on). Robert is involved in a love triangle/polyamorous arrangement of sorts. The nature of the trio is never made all that clear, but one lady appears to have two suitors, and the three attend events together. There is a lot of wink-wink, nudge-nudge throughout, but the film is quite chaste. It’s definitely left up to the audience’s interpretation.

For a film considered a pioneer of queer cinema, Victor and Victoria lacks… gayness, for lack of a better word. In 1982’s Victor/Victoria, the character based on Viktor is openly gay. Back in this 1933 German version, however, he was chasing after a young girl, and showed no romantic interest in men.

Also, Robert finds out Susanne is a woman early on, and carries on the charade for his own amusement. In later versions, there is more of a grey area where questioning one’s sexuality comes into play.

There is a scene where Susanne’s Mr. Viktoria flirts with a woman who looks a lot like Susanne herself does out of drag. It’s done in a “I’m proving I’m a man” sort of way, and also in a saving face sort of way, but it’s still fun to watch. It also triggers a bar brawl, when said woman’s boyfriend comes to challenge Mr. Viktoria. Also fun.

To be fair, what the original script contained, and what 1930s Germany allowed on screen, are likely different. Also, considering subsequent remakes contained fleshed out gay characters, it is still an important film for LGBTQ+ culture. It moved things forward, even if it was done subtly.

Speaking of subtlety, there was a brief example of blackface in Victor and Victoria, that was handled surprisingly well, for the time. During a scene where Viktor is showing photos of roles he’s played, he holds up one where he was Othello. Considering this was 1933, I was glad to find it presented as ridiculous. It was done mainly to demonstrate Viktor’s complete lack of self-awareness. Ideally, of course, it would have been left out of the film entirely. For a vaudeville actor of the early 30s, such as Viktor, it is sadly something he would have been asked to do. It is a cringeworthy moment, especially for modern audiences, but at least it was presented as such.

I can’t believe I’ve made it this far without discussing the operetta format of this film. It is not presented like a standard musical, with showstoppers and large choruses (save for certain Viktoria performances). Instead, characters sing sporadically, during otherwise spoken lines. Kind of like RENT does in between the big musical numbers. Speech is often delivered in rhyme, which draws the audience in. It makes it more enjoyable, and easier, to follow along. An added bonus is that some of the words still rhyme in the English translations appearing on screen. English is a Germanic language, after all, so I guess that makes sense.

While Victor and Victoria may not be the most obviously “gay” movie, it paved the way for what came after it. It is, indeed, a pioneer for the LGBTQ+ culture. This charming little gem is a worthy choice for your Pride Month viewing. Check it out on Kino Marquee’s virtual cinema. You can still celebrate the out, even while you stay in.

Thank you for reading! What are your thoughts on Victor and Victoria, and its place in LGBTQ+ culture? Comment down below!

[…] documentary goes undercover to show the horrible torture and sometimes execution of members of the LGBTQ community in Chechnya, and the brave acts a select few are doing to save them and get them out of the country […]