I'll take any chance to break out the word, "Hitchcockian". 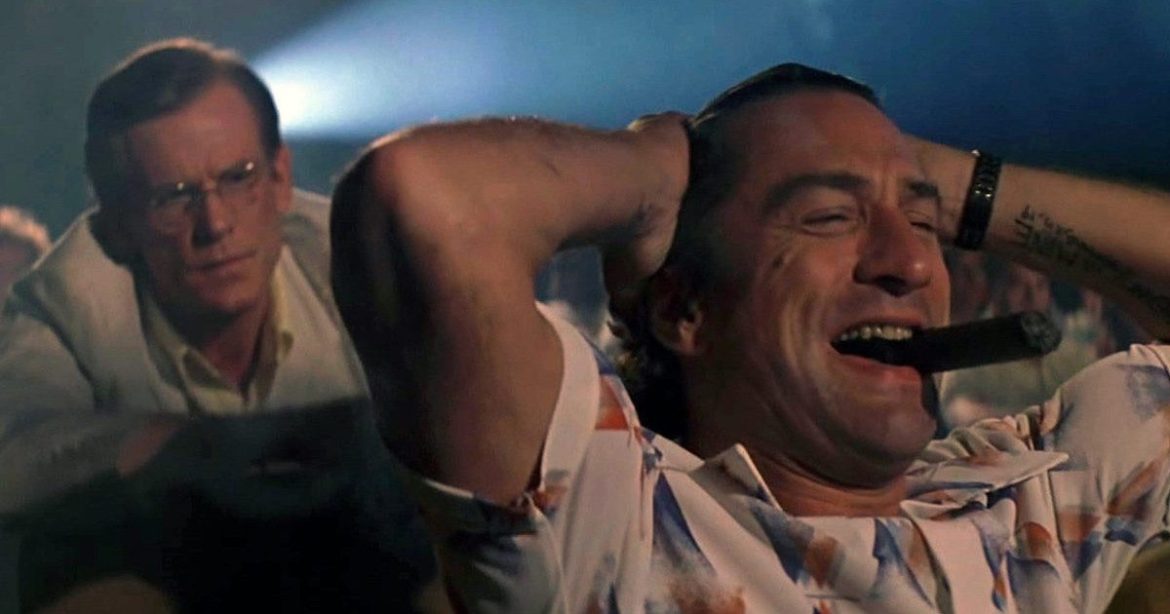 Cape Fear is a Hitchcock film without Hitchcock. Who better to make it than Martin Scorcese, the master of all things bloody and dark? It’s the kind of film that theaters were made for.

Cape Fear is a remake of the 1962 film of the same name, starring Robert Mitchum and Gregory Peck (who make cameos in the 1991 version). Nick Nolte stars as Sam Bowden, an attorney whose former client, Max Cady (Robert DeNiro) is out for revenge after being released from jail. Quick warning: this movie takes on some pretty heavy stuff. There are scenes of rape, assault, and murder as well disturbing depictions of predatory relationships with minors. Definitely not one to step into without a little wariness.

This movie is more Hitchcock than Scorcese. Some of the same tropes and cinematography are used to create that sense of uneasiness and suspense that The Master himself perfected. Some of Hitchcock’s most famous films — Vertigo, Psycho, Rear Window — have strong influences on this film. Cape Fear is the modern homage to the past of the thriller genre.

Cape Fear mirrors some of the brilliant lighting techniques from Vertigo. In the 1958 film, there is a dream sequence that bathes James Stewart in psychedelic colors to mirror his descent into madness. Similarly, though not in a dream sequence, there are several portions of Cape Fear where changing colors signal Sam’s growing uneasiness. They almost have the same pattern as the lights in Vertigo, alternating between muted blues, greens, and reds.

Of course, Cape Fear is a more modern film, so there would be more modern, daring uses of color. One of the more brash uses is when Cady kills Kersek, leaving a bloody pool on the kitchen floor of the Bowden’s home. Sam, going to investigate the scene, slips and falls in the dark red blood, covering himself in it. It’s a traumatizing moment but, once again, brilliant use of color.

Like the classic James Stewart film about spying on your neighbors, this movie also gives the uncomfortable feeling of living in a fish bowl. When the Bowden family is trying to sleep at night, Max Cady sits on the border of their property, waiting and watching. While his intentions are more sinister than James Stewart’s in Rear Window, the impropriety of peeping into people’s windows is still an unsettling similarity.

Of course, we aren’t rooting for Max Cady like we were for L. B. Jefferies in Rear Window. Yet, it brings up a good point — should we have been rooting for him? After all, he was spying on his neighbors, which is pretty reprehensible. He did end up solving a murder because of it, but he broke his neighbors’ right to privacy. It brings up the fact that Hitchcock’s main characters are not necessarily all good or all bad — they are morally gray.

While the whole film has creepy Psycho vibes, one thing I noticed, in particular, was the casting of Jessica Lange. In this film, she wears her blonde hair short, reminiscent of Janet Leigh’s hair in Psycho. Even their names have the same initials. Probably just a coincidence, but with all the other Hitchcock references and tributes, I found this pretty cool. It’s no wonder that Lange was later part of the cast of American Horror Story.

That’s generally where the similarities in casting stop, but there are other aspects of Cape Fear that could echo some of Psycho’s characteristics. For example, Psycho deals with cross-dressing; in Cape Fear, Max Cady isn’t a crossdresser, but he does wear feminine underwear and he dressed as the Bowden’s maid to fool Kersek. These are pretty clear callouts to that famous 1960 thriller.

Cape Fear’s Sam Bowden progresses through the film in much the same way that North by Northwest’s Roger O. Thornhill (Cary Grant) does. In the beginning, they are unassuming men focused on their own lives. By the end, they are hardened into the people that life’s circumstances have made them.

Of course, Bowden didn’t have the same case of mistaken identity that Thornhill does. However, he is thrown into a life that he would much rather not be a part of. He learns what it’s like to kill a man and risk it all to save your own hide. And both men have been through life-threatening experiences that will forever alter the way they look at the world around them.

Plus, Nick Nolte is nowhere near as charming as Cary Grant.

The Man Who Knew Too Much Breakdowns

The Man Who Knew Too Much is one of Hitchcock’s more overlooked films. However, I see parallels to it in Cape Fear, the main one being the complete destruction of our main characters. The films begin with a family who is mostly put together and happy. By the end, both families are forever changed, not necessarily for the better.

In The Man Who Knew Too Much, the kidnapping of the McKennas’ son causes both adults to spiral into complete messes. Cape Fear shows that same progression in the Bowdens, watching them become shells of the people they used to be. While their previous family life wasn’t perfect, it was at least more put together than the disaster that happens because of Max Cady.

Mashing together the styles of two of the world’s greatest directors makes for a suspenseful, thrilling film that will keep you on the edge of your seat the whole time. Cape Fear has the scare factor of Hitchcock mixed with the complex characters of Martin Scorcese. Plus, it has the pull of Robert De Niro, one of the world’s greatest actors. This is what cinema was made for.

Thank you for reading! What are your thoughts on Cape Fear? Comment down below!

I loved your writing style, fit for the cinema review. Loved the comparison of cape fear with others you did and linking the relative between them. Excellent critic. Like some of the choices there. Xx
Isa A. Blogger
https://www.lifestyleprism.com/

Wow, these are really well thought out comparisons. Great piece!